Halloween Day 26: A Payday Friday Trip to the Ellsworth Goodwill

I go to Goodwill pretty frequently. If I don't... I can hear the cool stuff crying out to me in the night from the houses of people that found them before I did. It. Is. Haunting.

BUT! My most regular trips to Goodwill happen on the bi-weekly Fridays when I get paid. This is the afternoon when I really slow down, take my time, and comb through the inventory. This past Friday was a payday Friday, and I went into my Ellsworth Goodwill with Halloween on my brain. And I'm glad I did. You can already feel a lot of stores winding down and easing away from Halloween and gearing up for Christmas. My local Wal-Mart has had a Christmas section complete with pre-lit trees and aisles of ornaments up for weeks now. Sigh. But I am not yet done with this Halloween season, dear readers. I still have some goodies in store. Let's take a look at what I picked up just this last Friday, shall we? I'm gonna lead with this amazing guy. He's one of those old hanging cardboard cut-outs from awhile back. I'm not sure how old he is, but I get at least an early-90's vibe if not an all-out-80's one. Ultimately, it doesn't matter if he was made last week because I am hopelessly in love with him. From the green pallor of his skin to the hot pink of his cape/wings/whatever, to the fact that he has a KEY to the BLOOD BANK chained to his vest... I just absolutely adore this guy. He is very likely to spend the winter hanging in the cave rather than packed away in the attic. He definitely makes me want to "Give Blood". 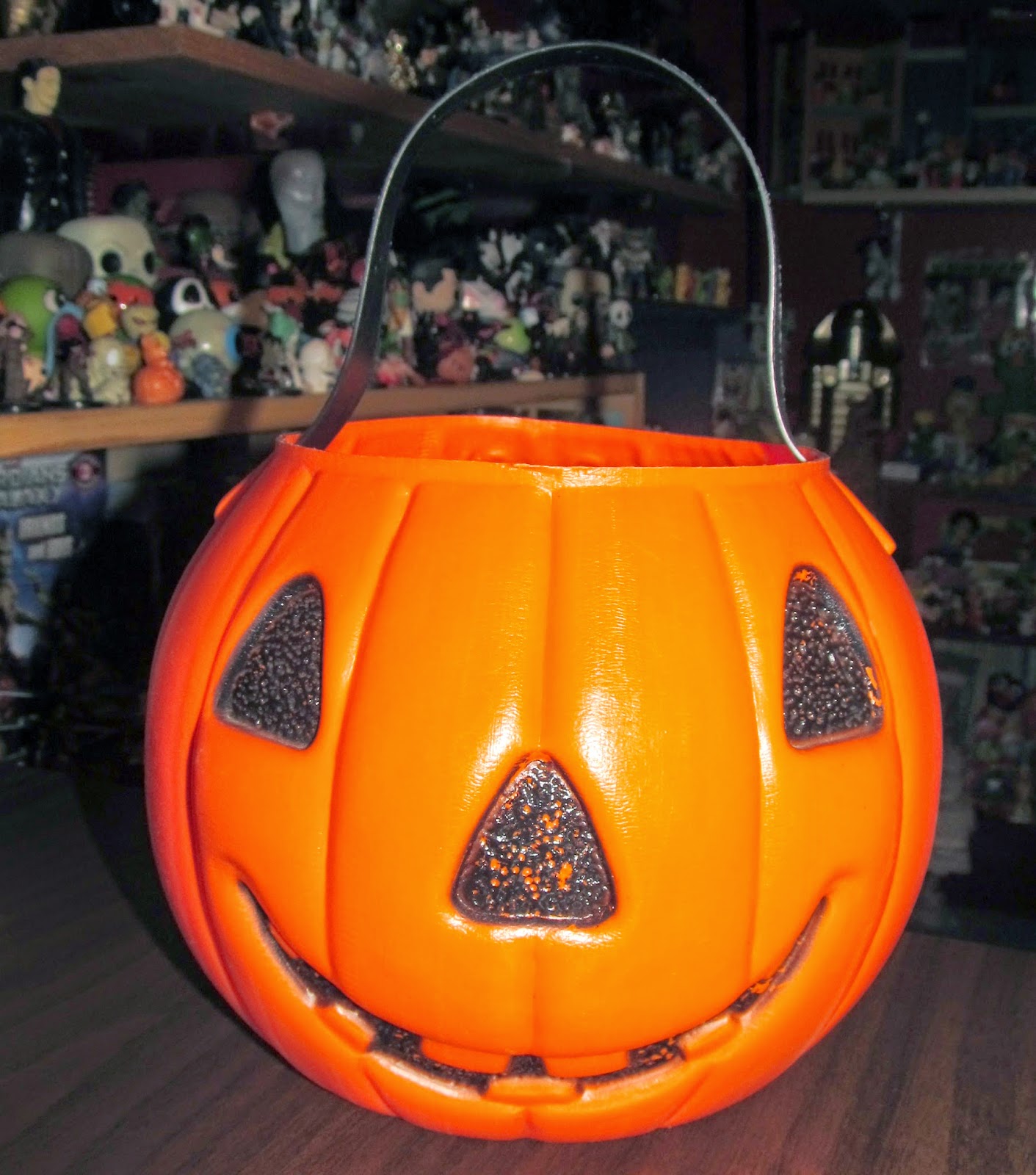 This cute trick-or-treat pail is about 3/4 the size of the ones you can get at Wal-Mart right now. He's also adorable. Pails like this kind of become visual white-noise around this time of year, but Goodwill does a good job of highlighting these types of items and making them seem new again. 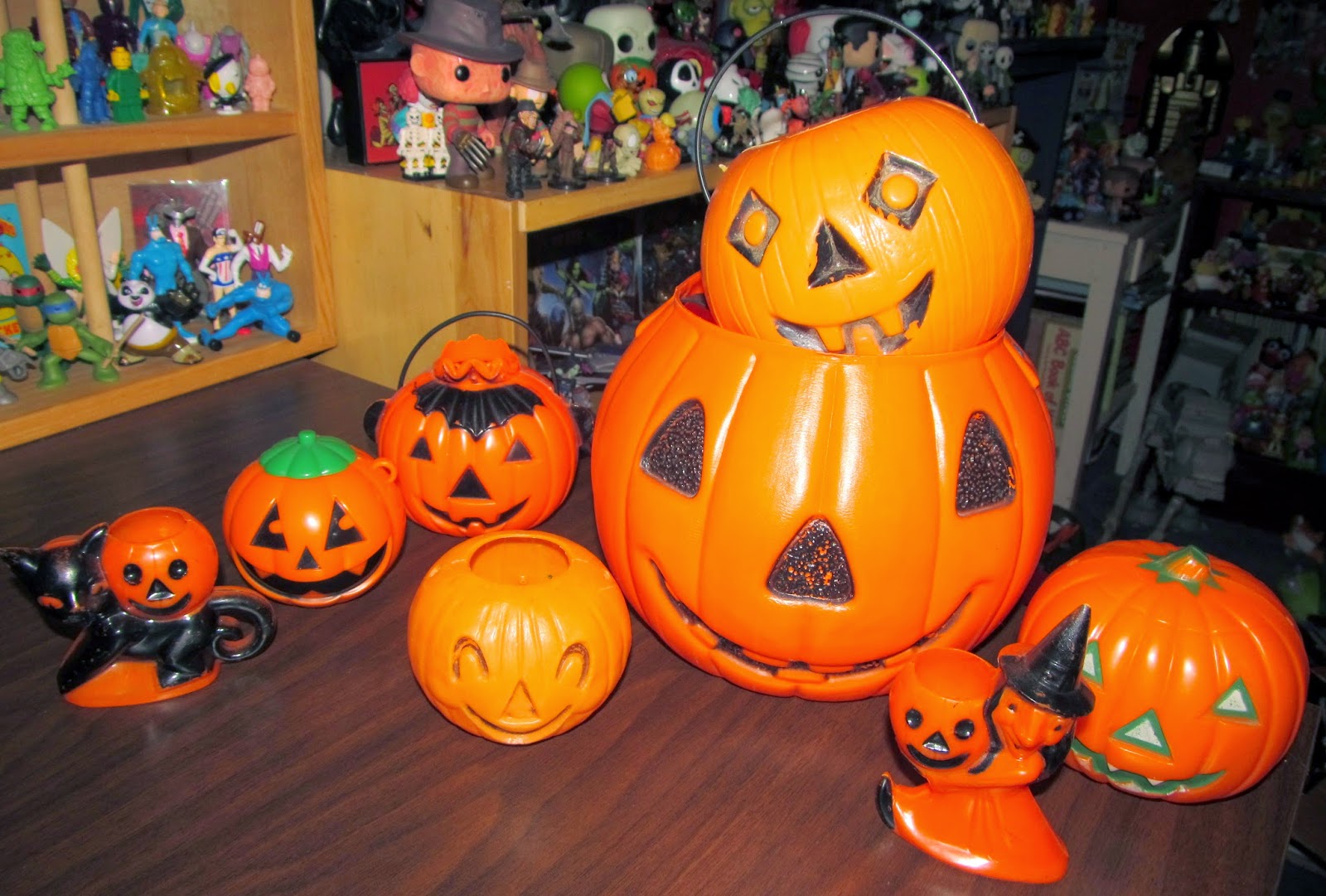 I've had a bumper-crop of Jack-o'-Lanterns this season Goodwill-wise. All but two of these guys were picked up just this year (The two Jack-o'-Lanterns in the top left corner, NOT the kitty) and I genuinely adore every one of them. 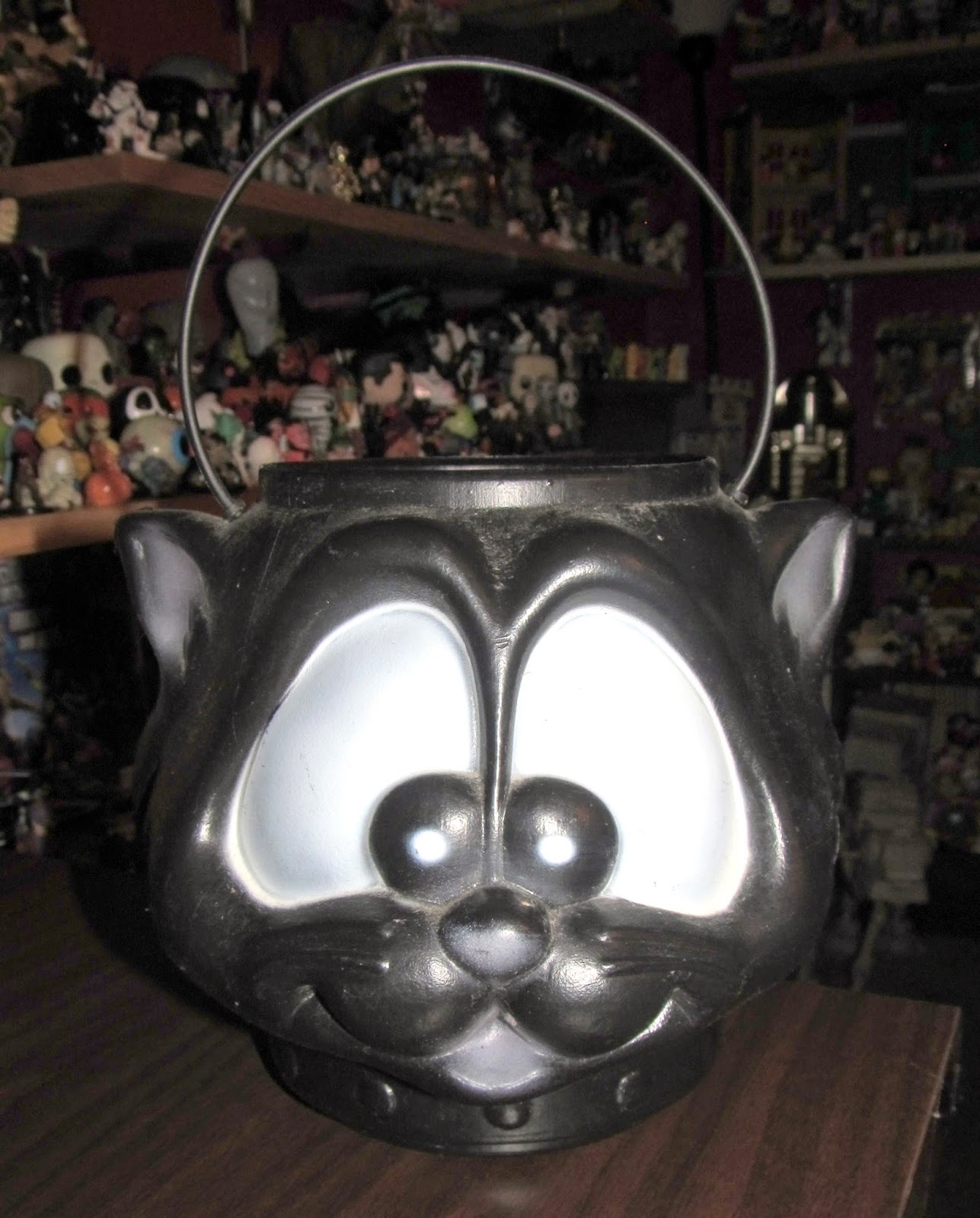 I remember this little guy being out for sale one year and not really caring about him for the 2 bucks or so he was being sold for at the time. But now that he's only .99 cents? Sure I'll bring him home. He's adorable. Looks like a Looney Tunes character for crying out loud. 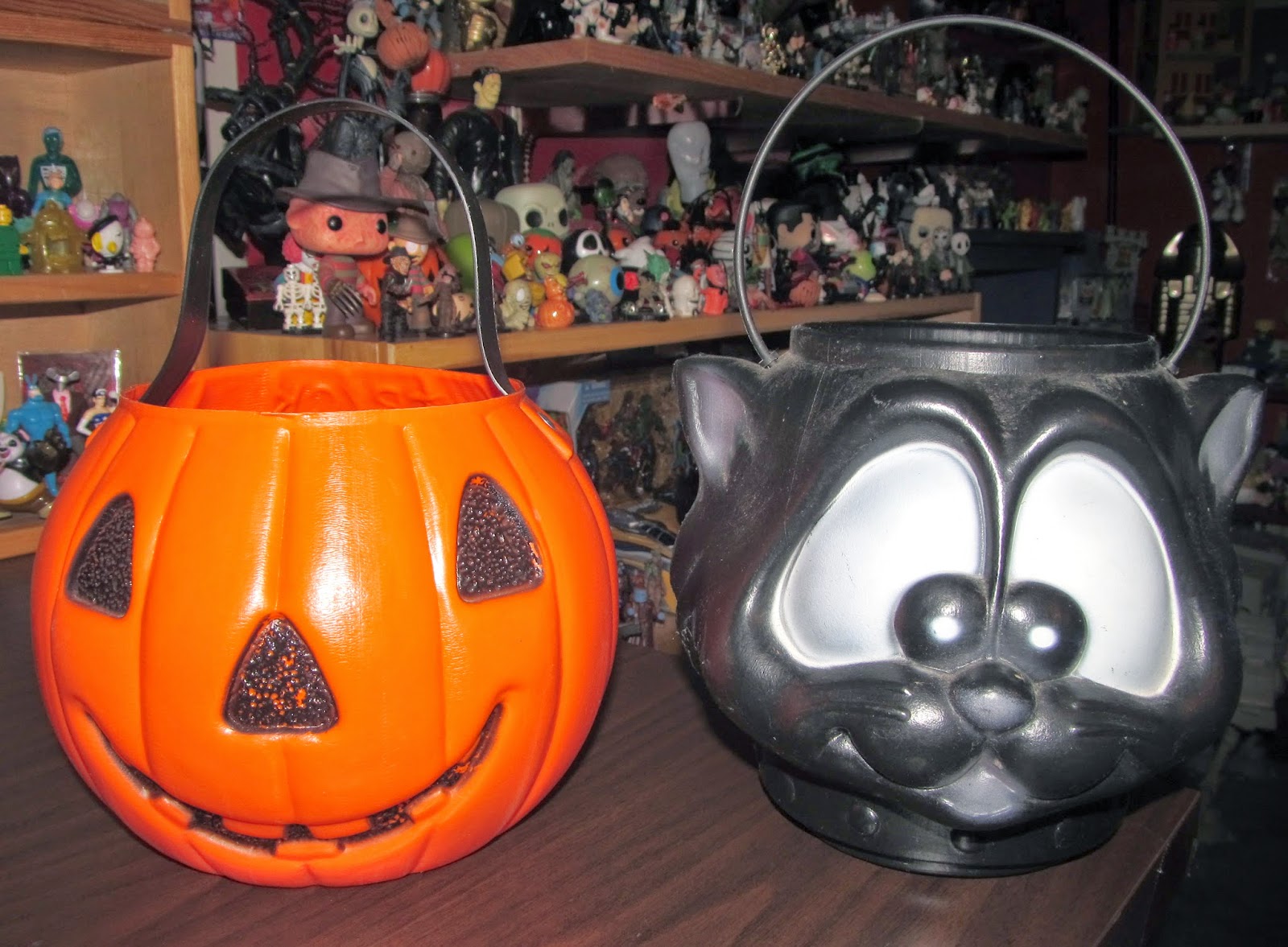 Here they are together because I just really like the picture of them next to each other. We can move on now. 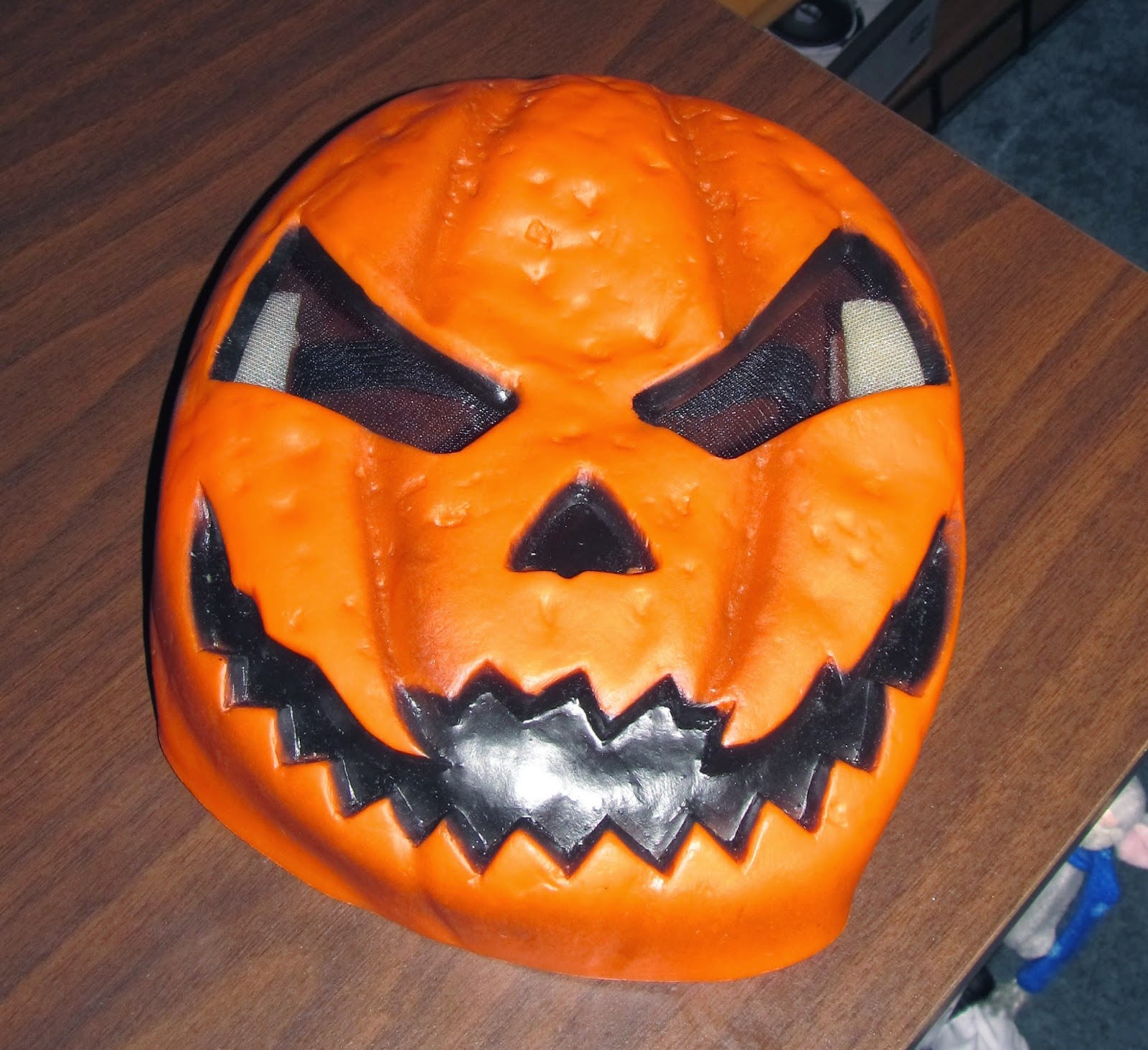 This mask was also only .99 cents. I like cheap rubber Halloween masks, and nothing says "Halloween" more than a cheap rubber Jack-o'-Lantern mask. This thing is definitely hanging up in the cave. 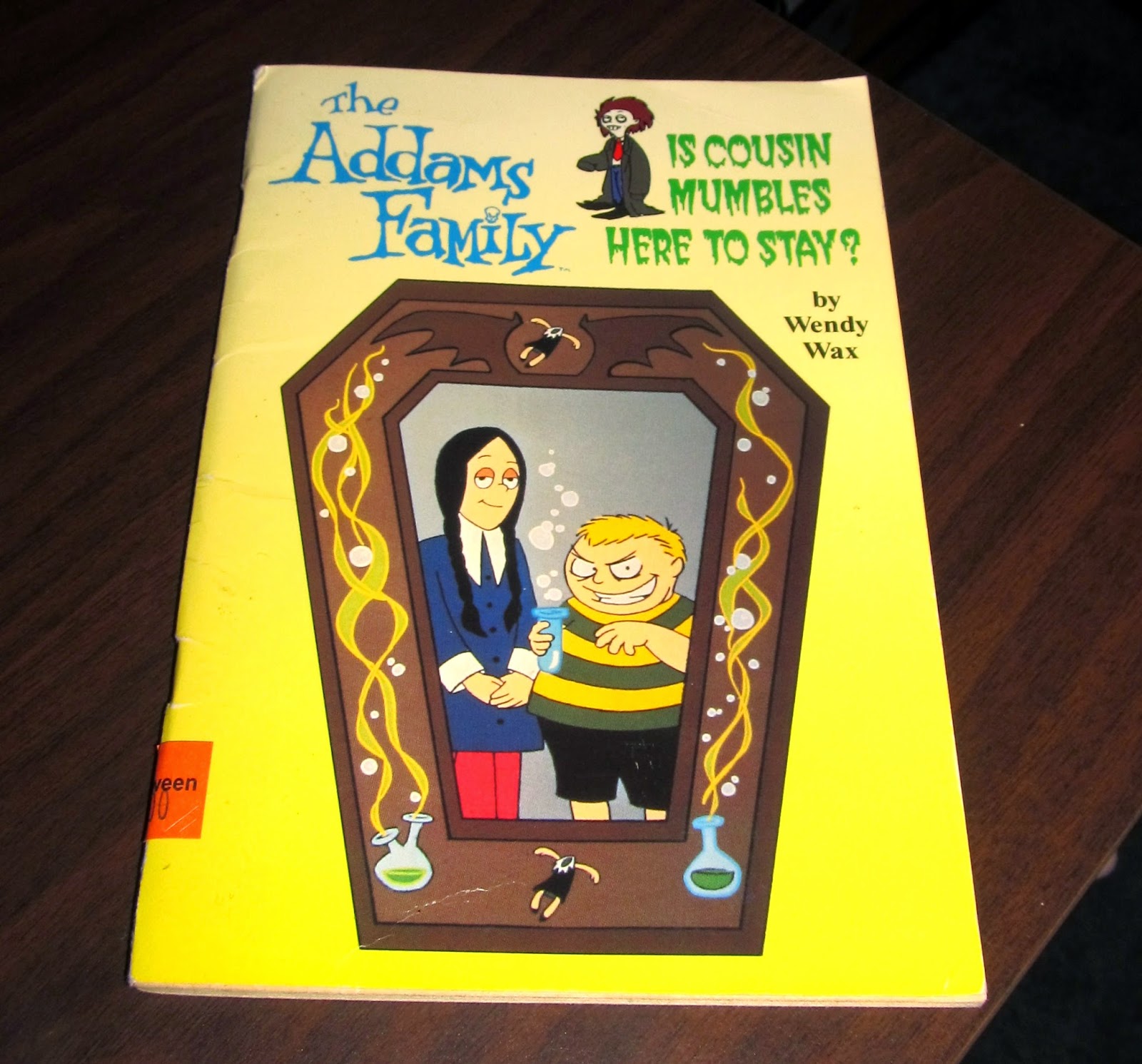 This season my Ellsworth Goodwill actually put together a shelf of Halloween-themed shelf of books for sale. This little book was tucked in between a bunch of mostly lame mystery novels on that shelf. The Addams Family: Is Cousin Mumbles Here to Stay? by Wendy Wax may not be a holiday classic, but I appreciate the effort to merchandise the franchise. 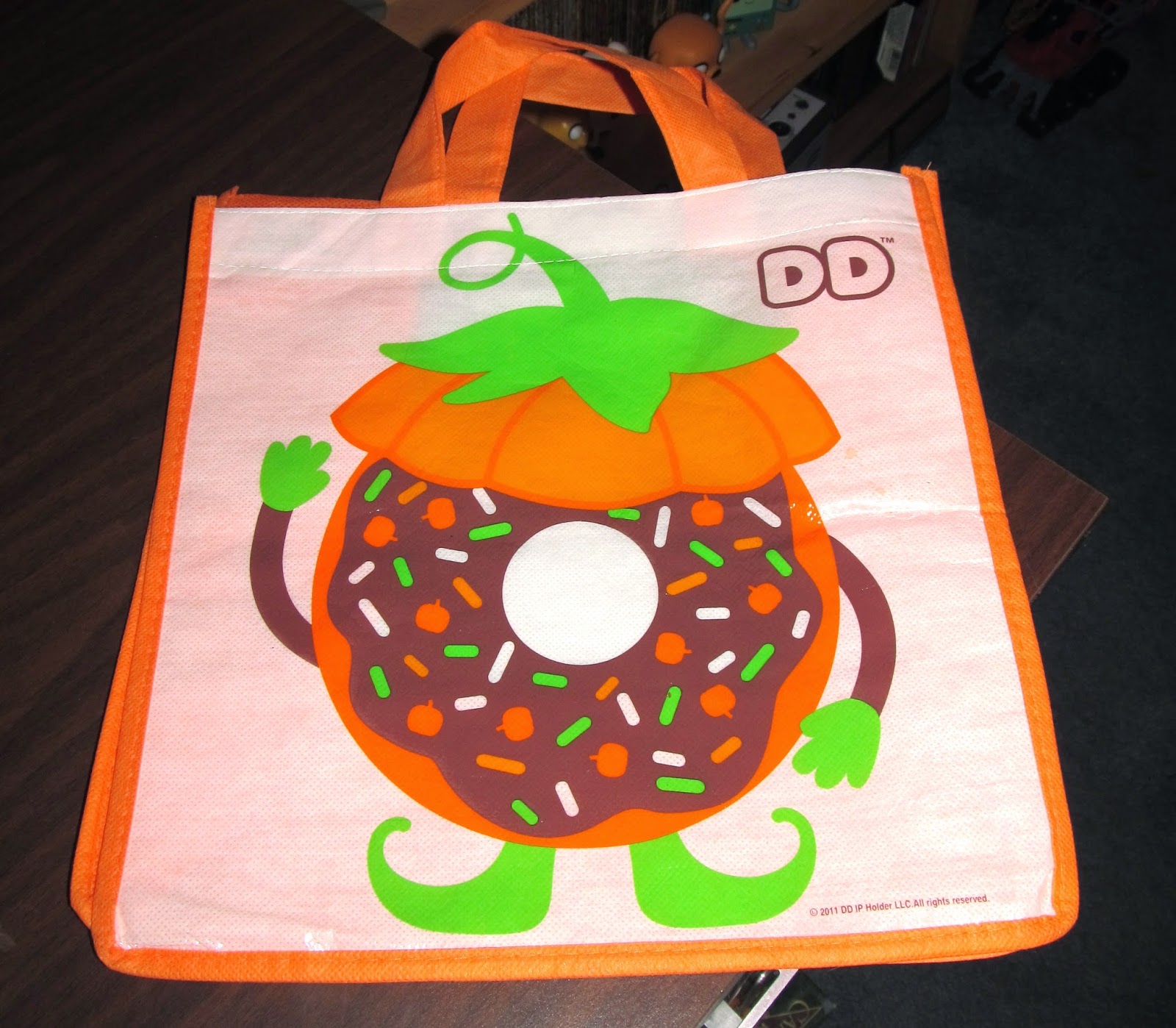 The last of the truly Halloween items on this trip was this Dunkin Donuts Trick-or-Treat sack. on the front is a Dunkin Donut not only frosted and decorated for the season... but wearing a costume. I genuinely wish companies would go back to making PVC figurines of their anthropomorphized characters because I would buy a bunch of donuts just like this one, dressed up for Halloween if they were roughly the same size and material as my California Raisins. Why have the M&M's been put out as straight up collectible PVC figures? I just don't get the world we live in anymore. 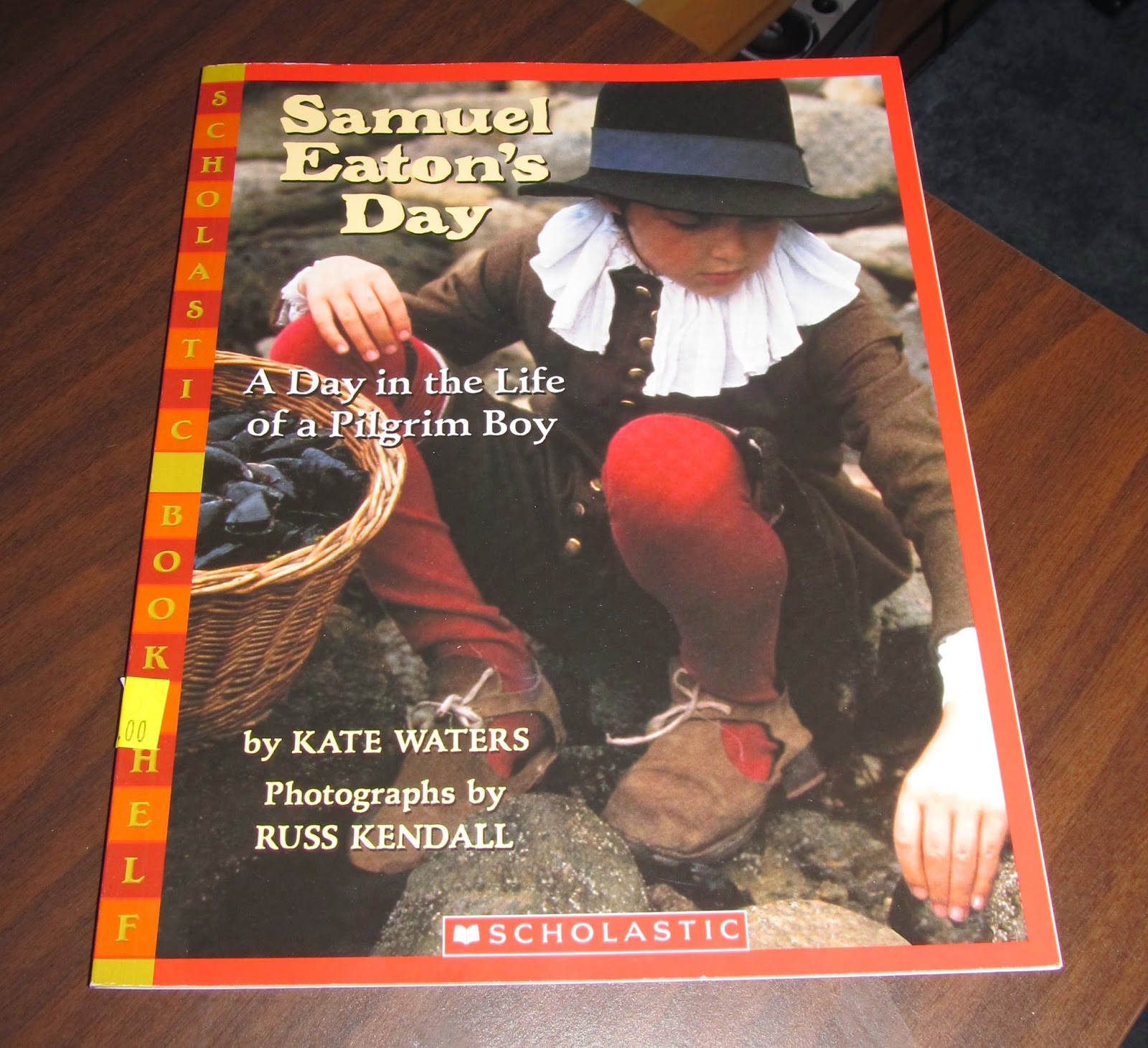 At least sticking to the Holiday theme... and the next chronologically correct Holiday... I found this Thanksgiving book: Samuel Eaton's Day: A Day in the Life of a Pilgrim Boy. We don't have nearly as many Thanksgiving books as we do Halloween or Christmas, but we do really enjoy them as a family. A lot of pilgrim/historical books tend to be very long winded and quickly lose the attention of my two boys. This one looks like a nice, quick read that they'll get a lot out of. 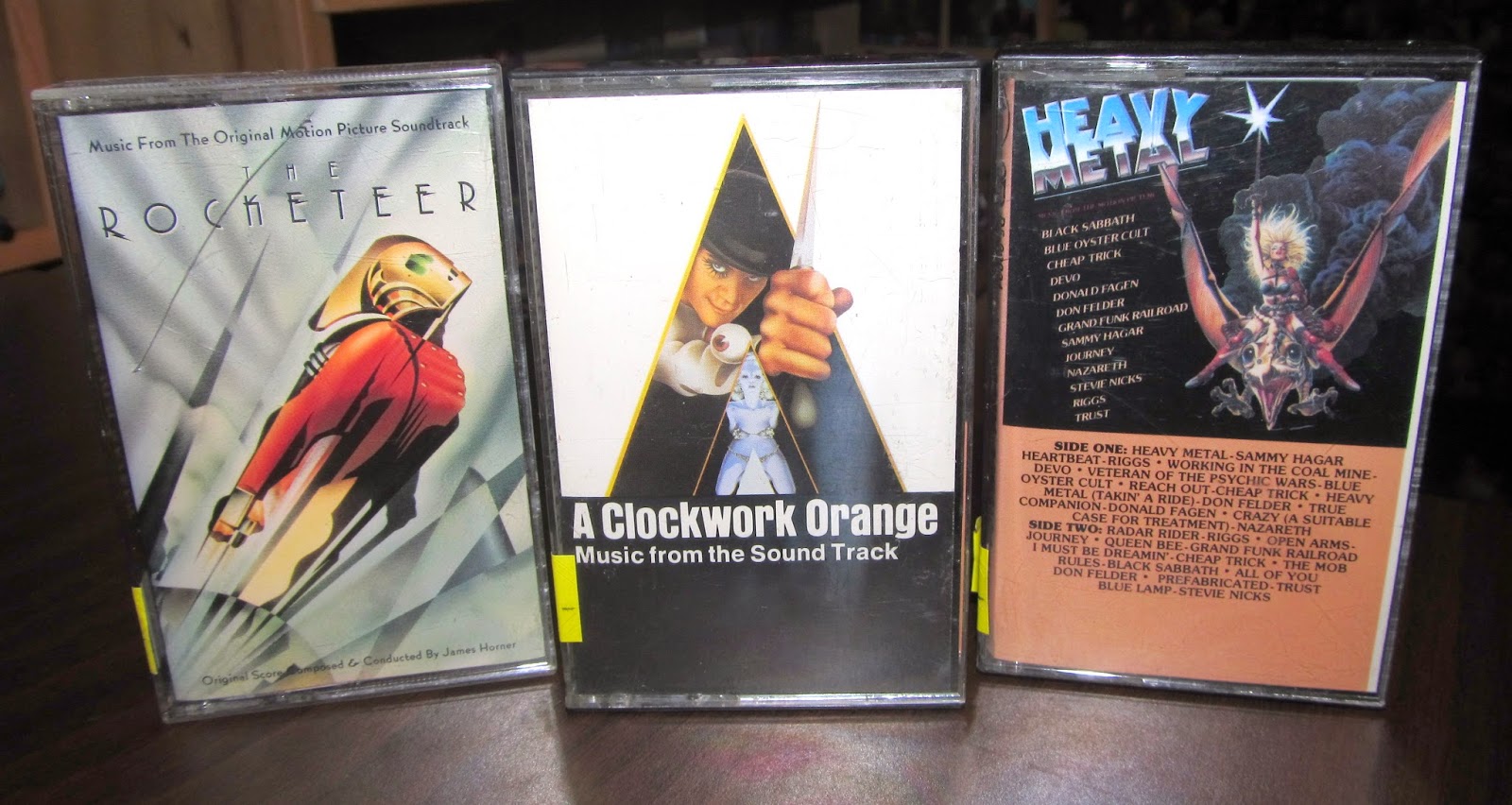 Next up, I made some additions to my budding Cassette tape collection! I thought these three were pretty exciting finds. "The Rocketeer", "A Clockwork Orange", and "Heavy Metal" are all interesting soundtrack finds, for sure. 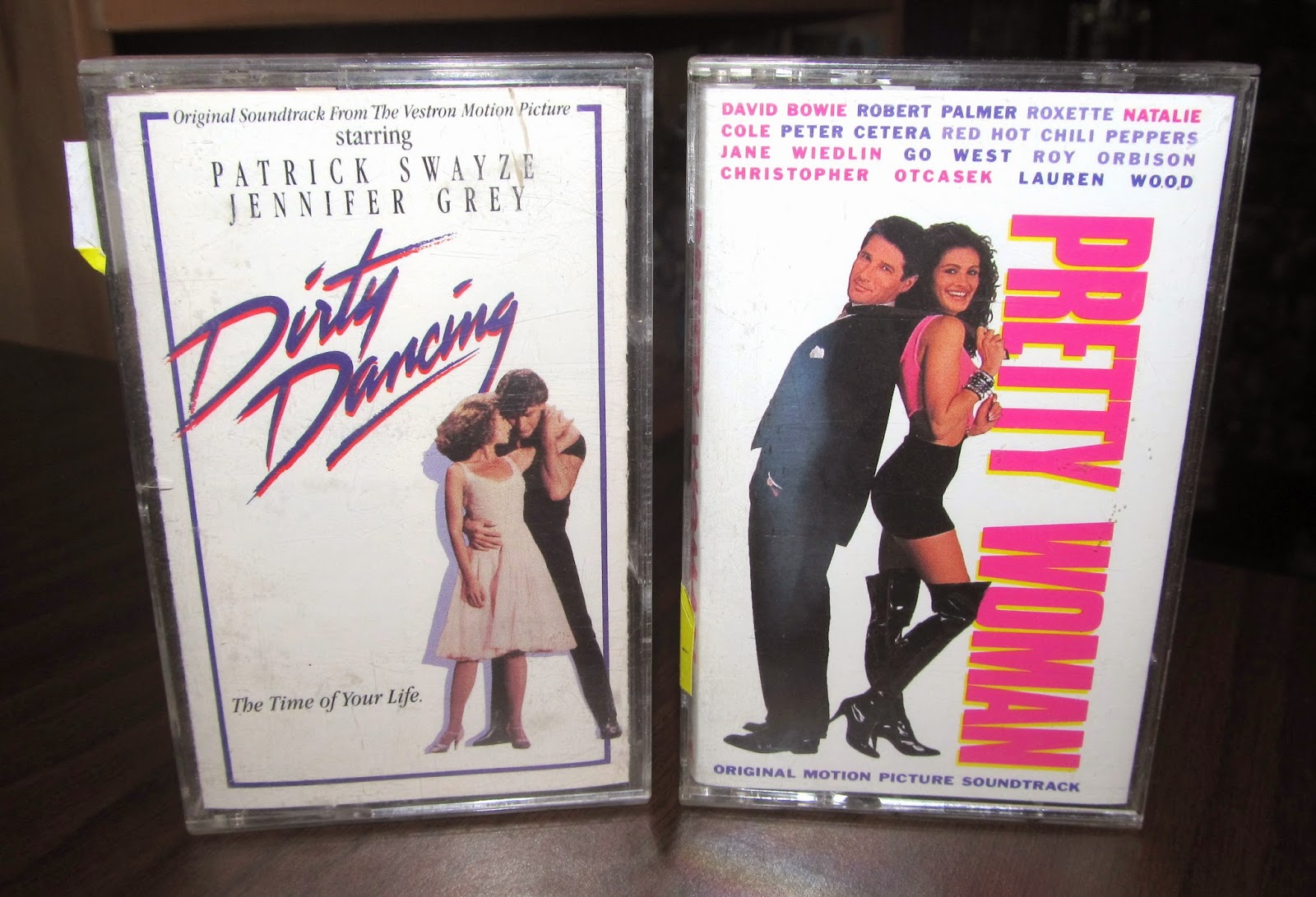 I will have to say I NEED to do a better job checking over my cases next time. These ones are all cracked to heck, which I don't want. But I gotta say regardless you guys: I was probably MORE excited to find the soundtracks to Dirty Dancing and Pretty Woman than I was to find any other cassette in this group. I know, I know, not the geekiest... but I really like both movies AND their soundtracks. So sue me. 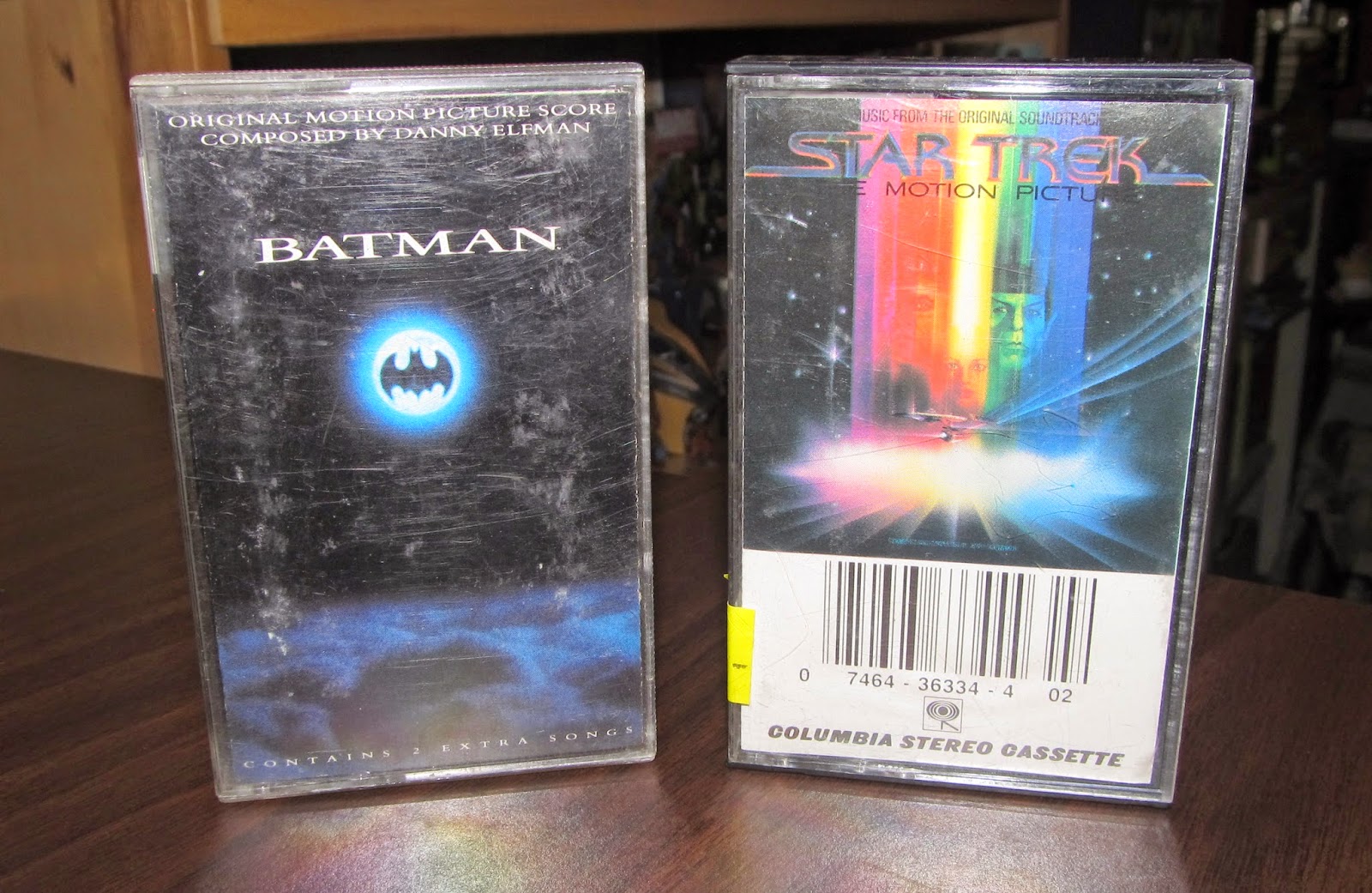 To get us back on the Geeky-train, I found a second copy of the "Batman" film score on cassette, which I will be sending off to a new home at some point I'm sure. And the soundtrack to "Star Trek: The Motion Picture". 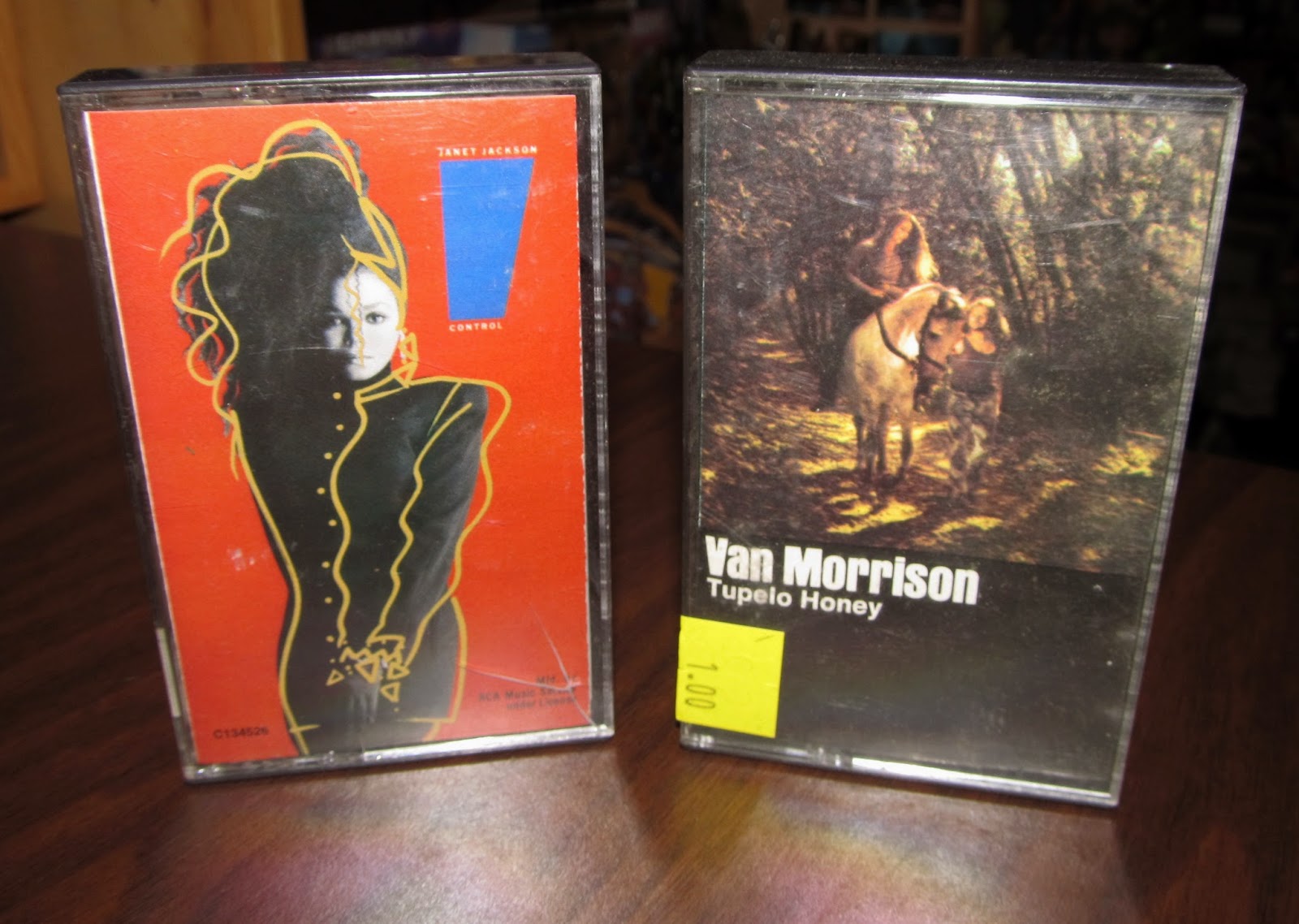 And to finish off the cassettes, and this post for that matter, I have Janet Jackson's "Control" and Van Morrison's "Tupelo Honey". I'm a big fan of both artists, so these were nice additions to the collection.

Well that's it for tonight kids! I'll be back soon with more Goonish Goodwill Goodies. So until then, Happy Haunting!