Halloween Countdown Day 12: A Look at Halloween in the Geek-Cave

I love Halloween. Year round. I am always on the prowl at Goodwill, even in March, for great Halloween merchandise. Horror movies. Ghost story collections. If it goes bump in the night I love it.

So... it would stand to reason that there would be a bit of an influence on my environment due to this. So I would like to take you on a brief tour of the most Halloween-y aspects of the cave I call home.

First off, here is the main shelf that I consider my "Halloween" shelf. This is the whole thing, but the next three pictures kind of break it down into smaller, digestible bite-sized chunks. 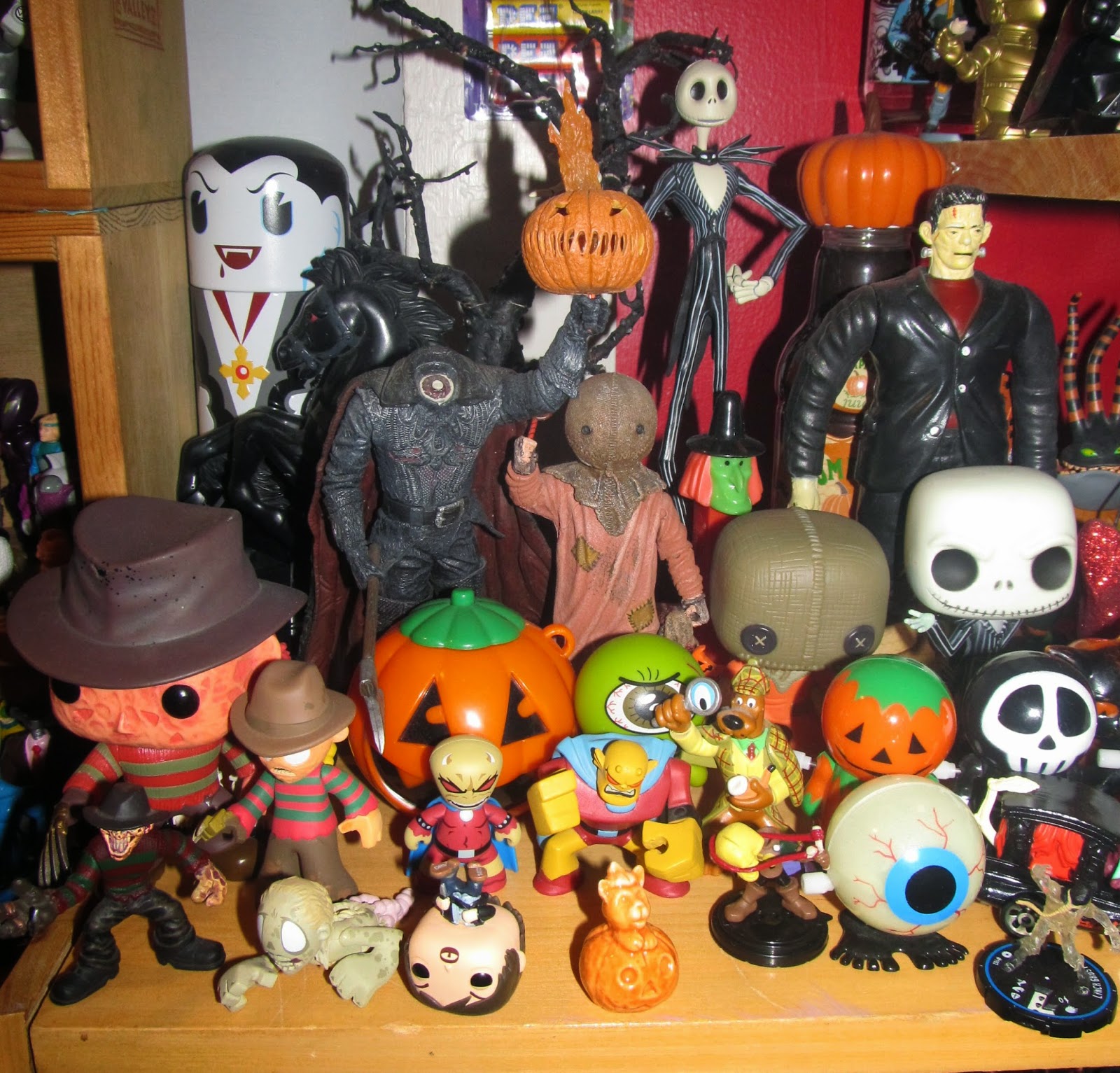 Here is the left end of the shelf. It's the end closest to my desk, so I make sure to keep the heavier hitters like Jack Skellington, Sam from Trick R' Treat, and the Headless Horseman right where I can see them. You may also notice the legless zombie from Walking Dead, a pair of Etrigan the Demon figures, and a trio of Freddy Kruegers. Yes. That is Daryl Dixon standing on his head. Because he's top-heavy. 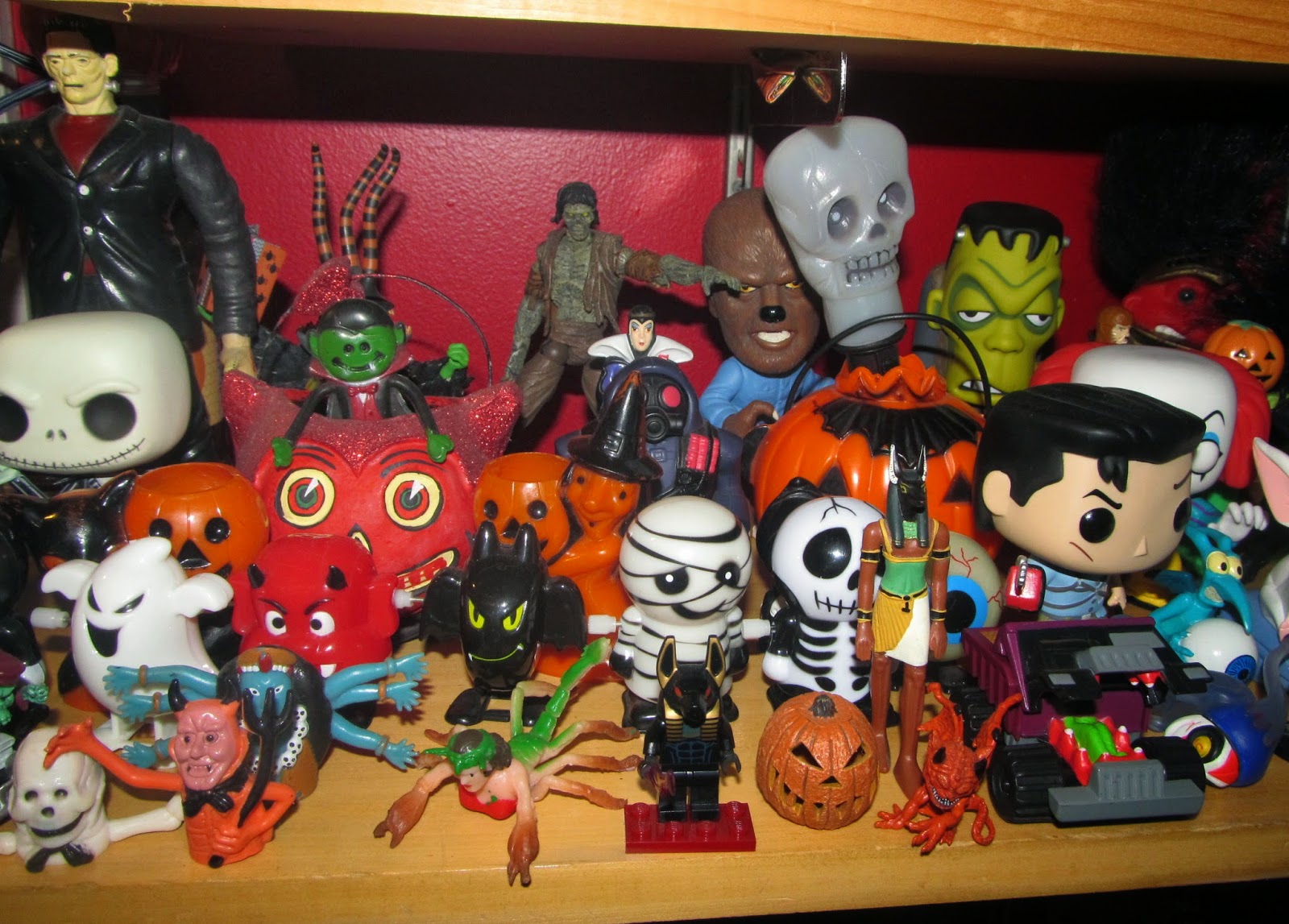 Here's the center of the shelf. Many miscellaneous characters and items here, including a bunch of wind-up Halloween guys, a couple of Anubis toys, and various Halloween items like plastic jack-o-lanterns, werewolves, Frankenstein monsters, etc. 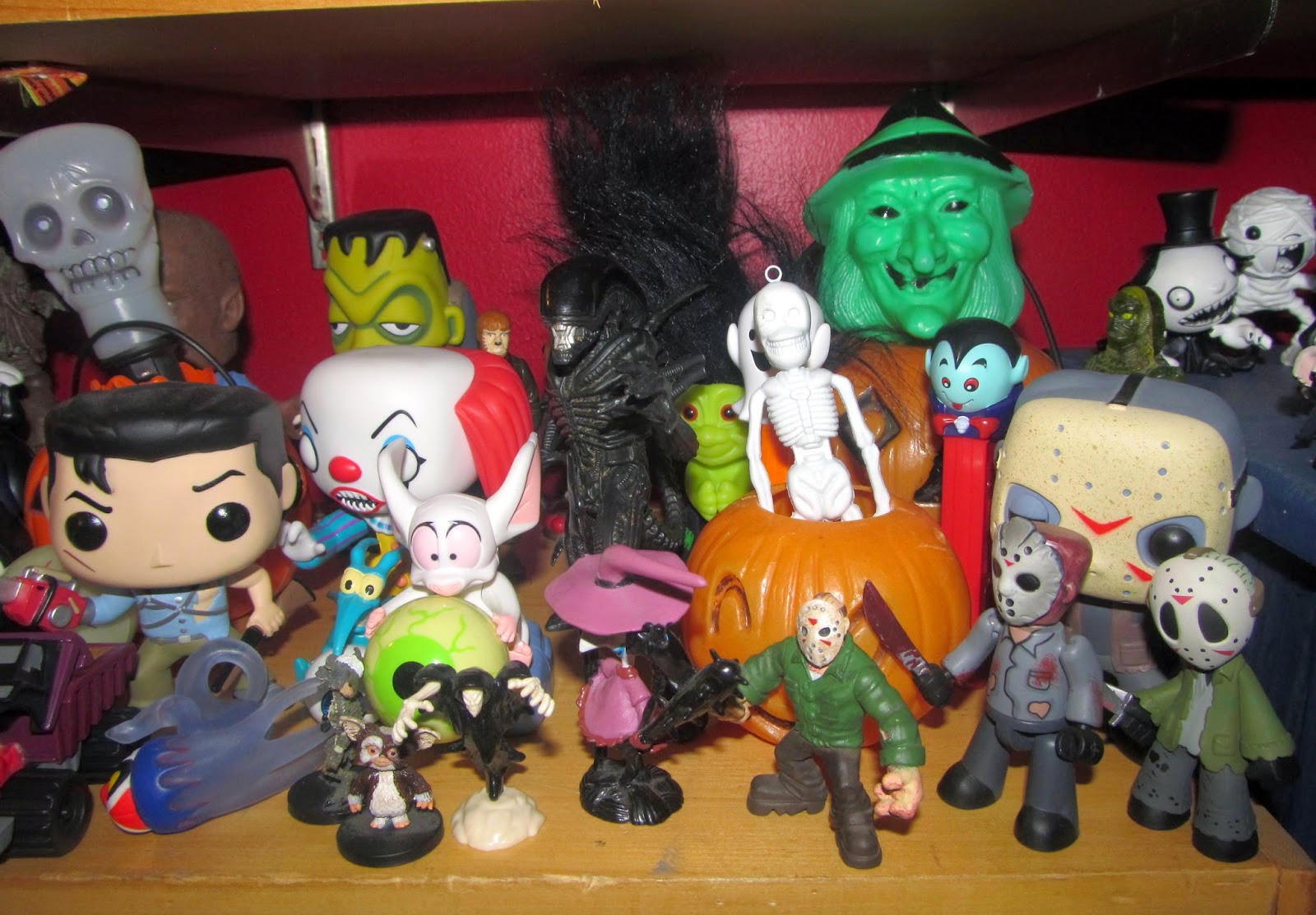 And finally, on the far right side we have a barbershop quartet of Jason Voorheeses, some more jack-o'-lanterns, and a host of ghouls and goblins like Pennywise the Clown and the Xenomorph. You will of course notice 1. there is a heavy Funko POP! presence here... and 2. it is INCREDIBLY crowded. 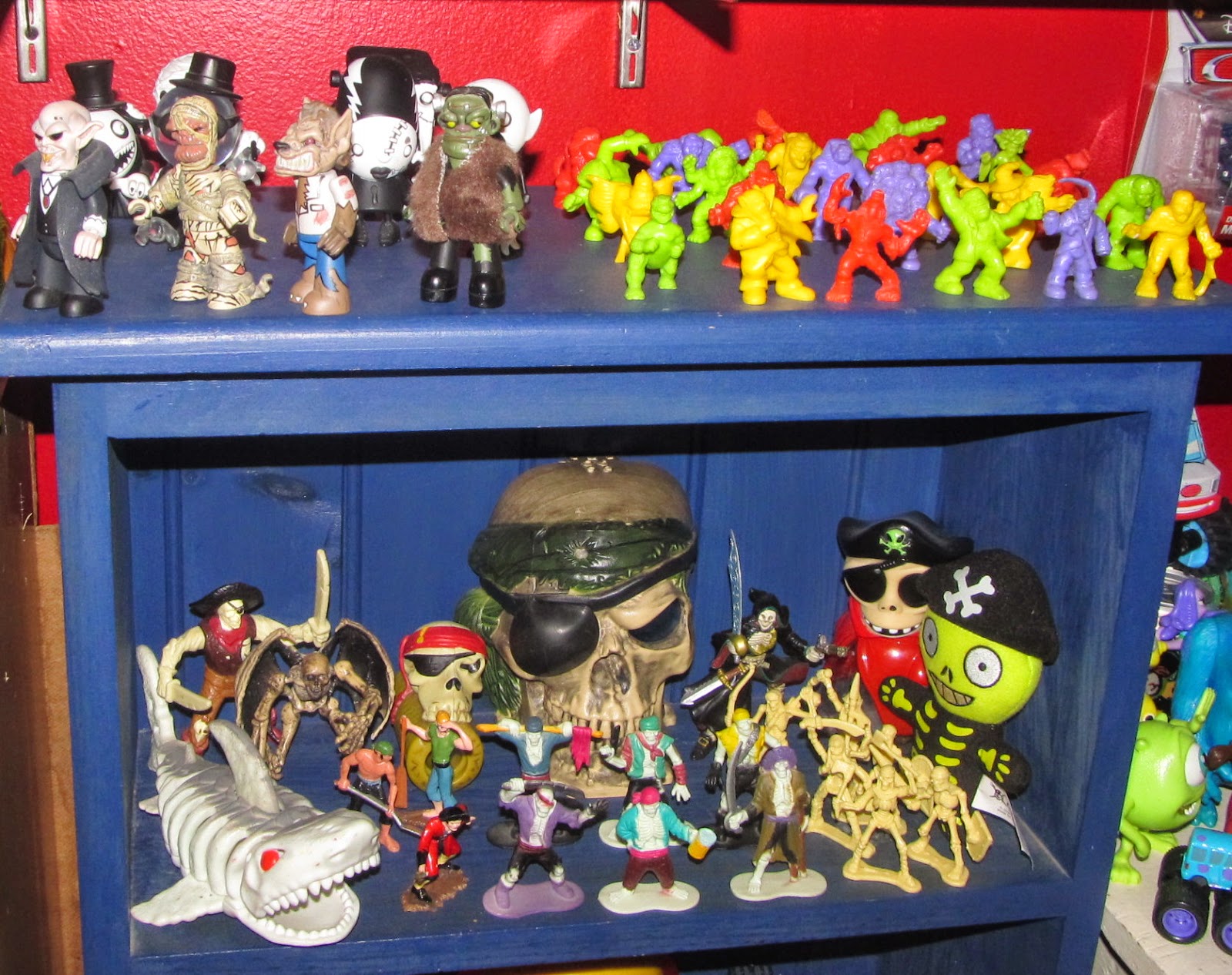 Right next to the right end of the official Halloween shelf is this little shelf. It is topped by my monster Mez-its, my set of Killer Panda Monsters, and my Monster in My Pocket figures. These guys are all beautiful to behold, and therefore get this shelf to kind of keep them out of the crowded mess that is the Halloween shelf proper. It's still not exaclty how I'd like to see all of these toys being displayed... but again, I'm runnin gout of room. Right below those monsters is my collection of skeleton pirates (plus three living pirates that had nowhere else to go). I have waxed poetic SEVERAL times on my blog about pirates, ghost pirates, skeleton pirates, and how they tie into Halloween so perfectly. So... I won't do it again now. 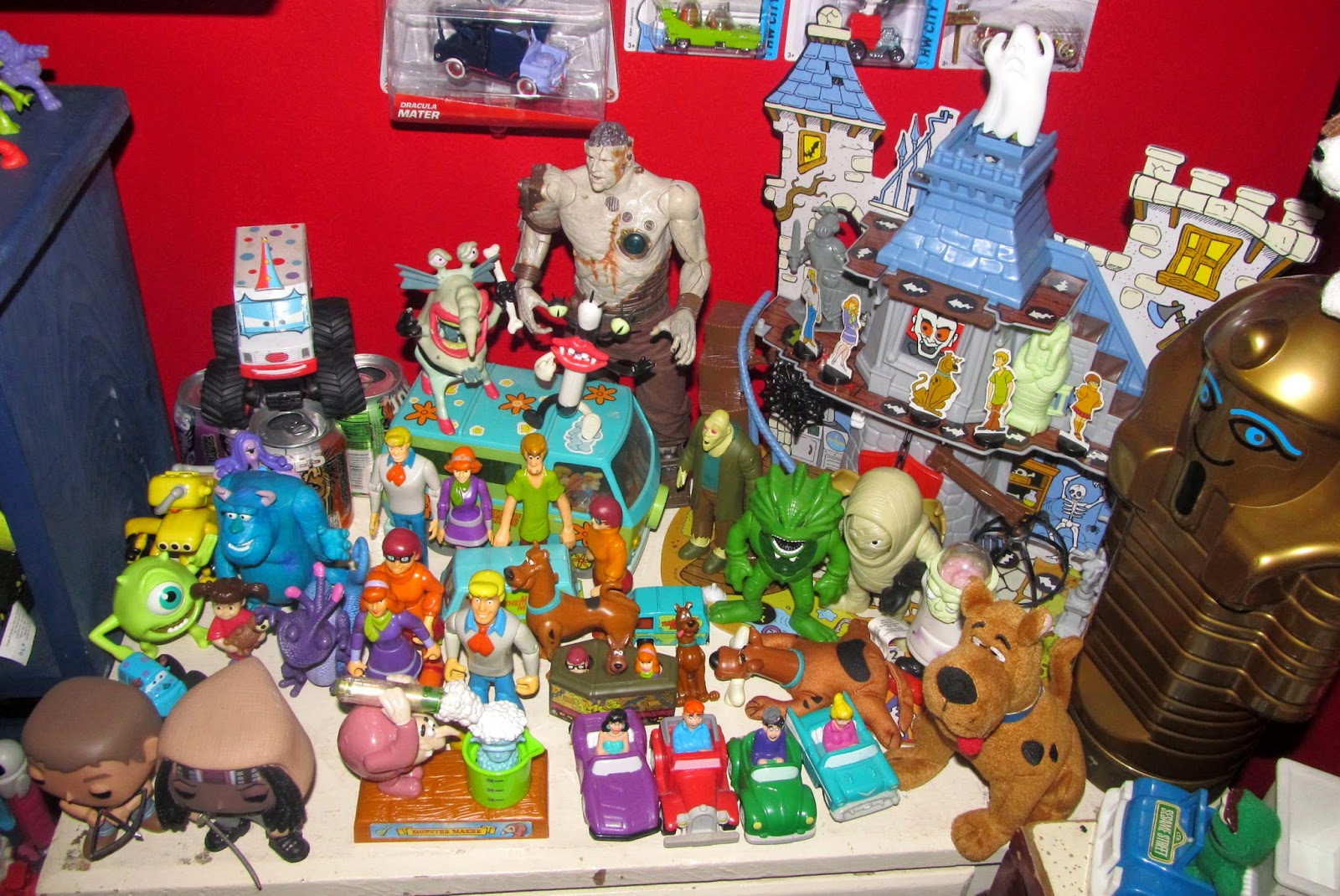 Right next to THAT blue shelf is an area mostly dedicated to Scooby-Doo, but also includes Monsters Inc., Aaah! Real Monsters, Stretchy Screamers, the Walking Dead Funko POP! and... Archie (I justify this because of the Afterlife With Archie series, which I am a rabid fan of). This is not the only Scooby-Doo area within the cave however...

Because over on my desk, I have a dedicated space for my Mystery Mates figurines! These guys are just great. I just wish they had released more monster figures before seemingly giving up. You can see I also have some Joker and Penguin figures in there, as an homage to the episodes where the gang meets up with them... and again the Monsters Inc. guys... just because. Real monsters and all that.

On the curtain rod above that very shelf is my McDonald's trick or treat pail collection, featuring a couple of vintage McBoo pails and the three Scooby Doo pails from 2012. You can also see a couple of Scooby-Doo books poking out there as well. 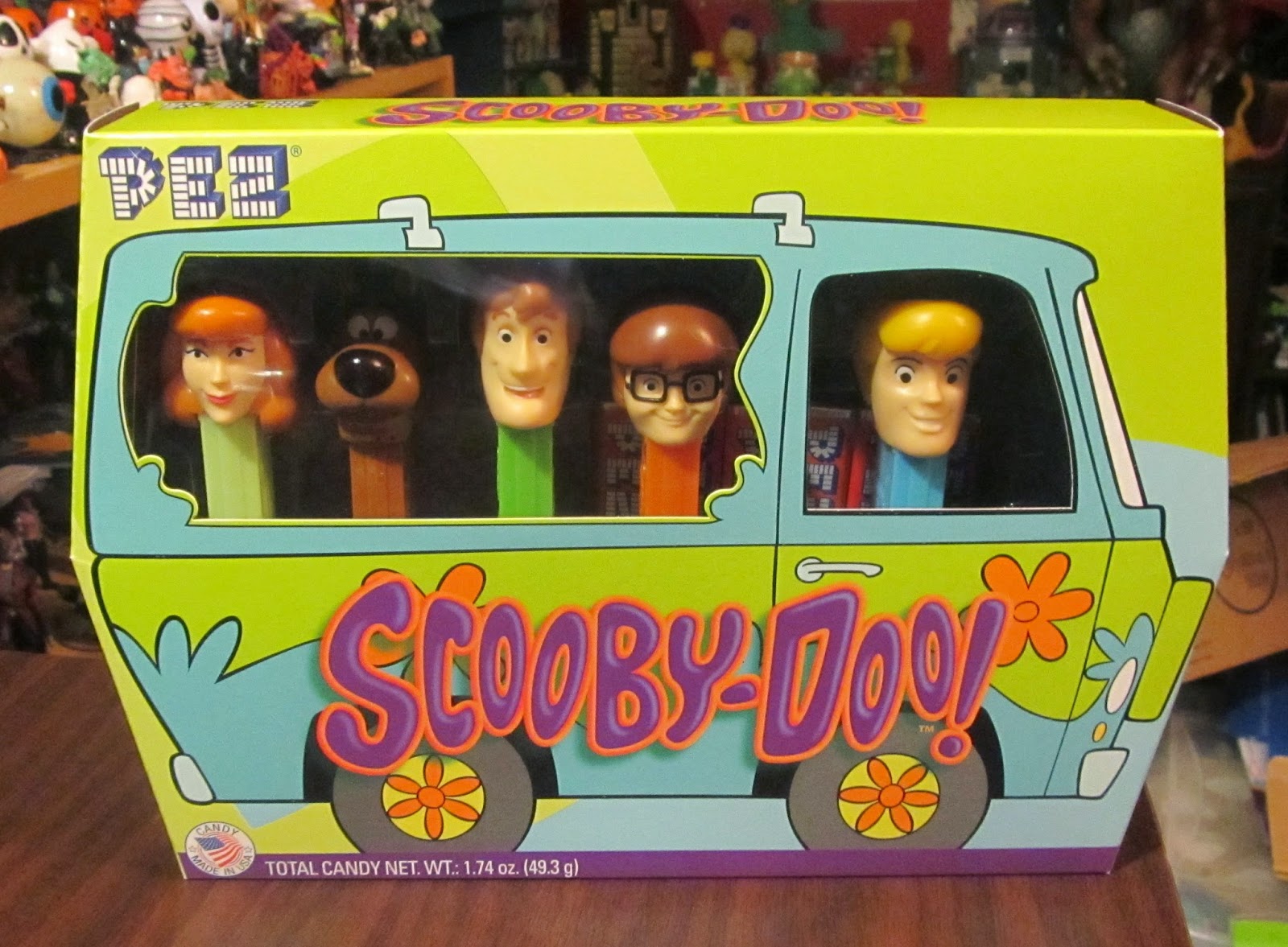 One of my most recent additions to the cave is this PEZ dispensor set that my 5 year old son picked out for me for my birthday. When I received this, I didn't even know this pack existed yet! He saw it at Wal-Mart and told my wife she HAD to buy it for me. And just look at this thing. It is truly beautiful. 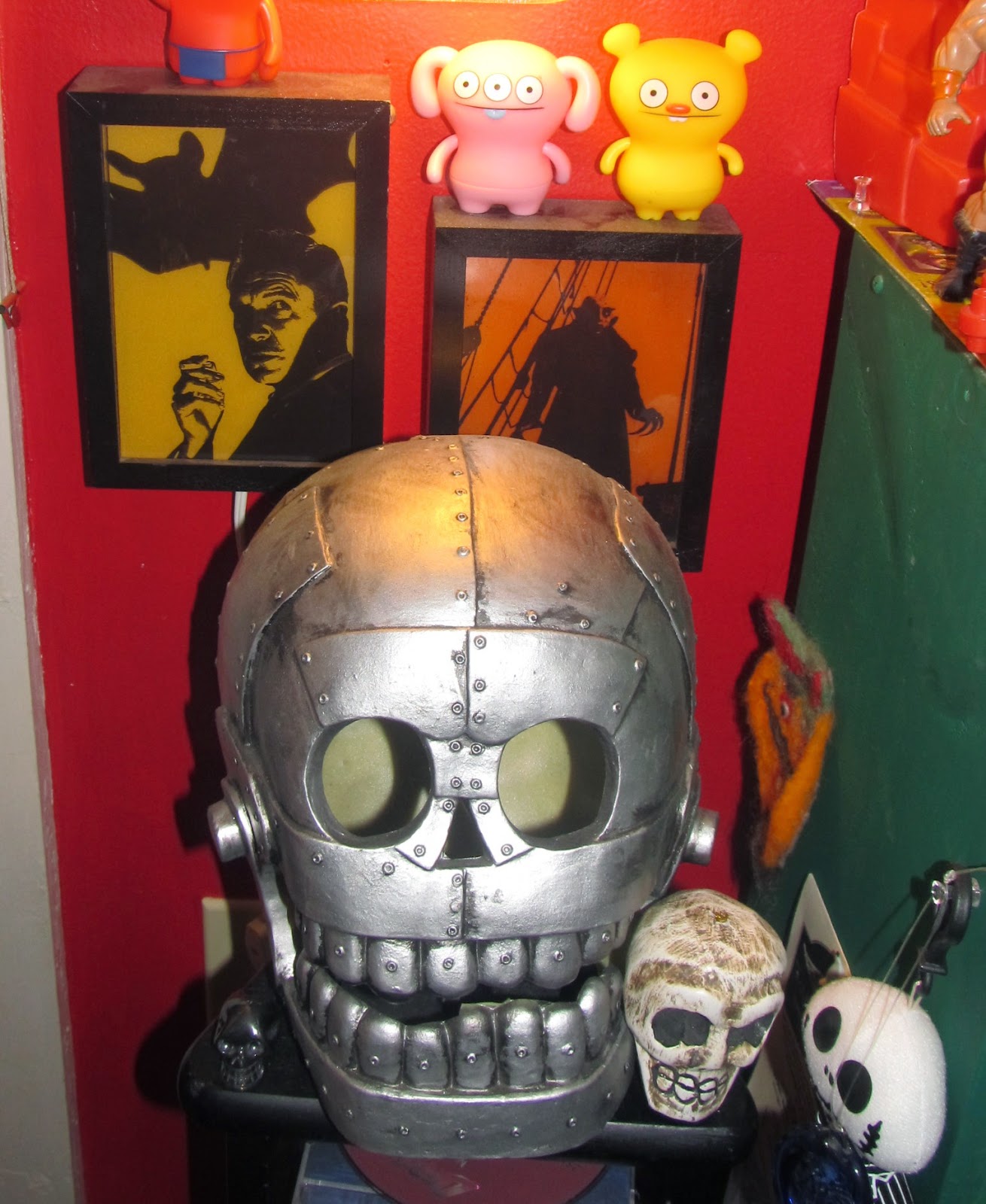 This little area sits directly behind me when I sit at my desk. The steam-punk-looking skull-thing is one of those light-up reusable jack-o'-lantern type things you buy at Wal-mart made of a sort of hard plastic-y foam that has been painted over. It is beautiful. The light boxes above it were bought by my wife from an online crafter with a now-defunct shop called "Morbid Decor" they are prized possessions. I had planned on adding a third light to the set with an image from Night of the Living Dead on it... but then the shop closed and it was no longer available to buy. Sigh. I  literally set the Ugly Doll figures on top because I had no where else to put them. It occurs to me now that I could have found something a bit more appropriately macabre to go there. 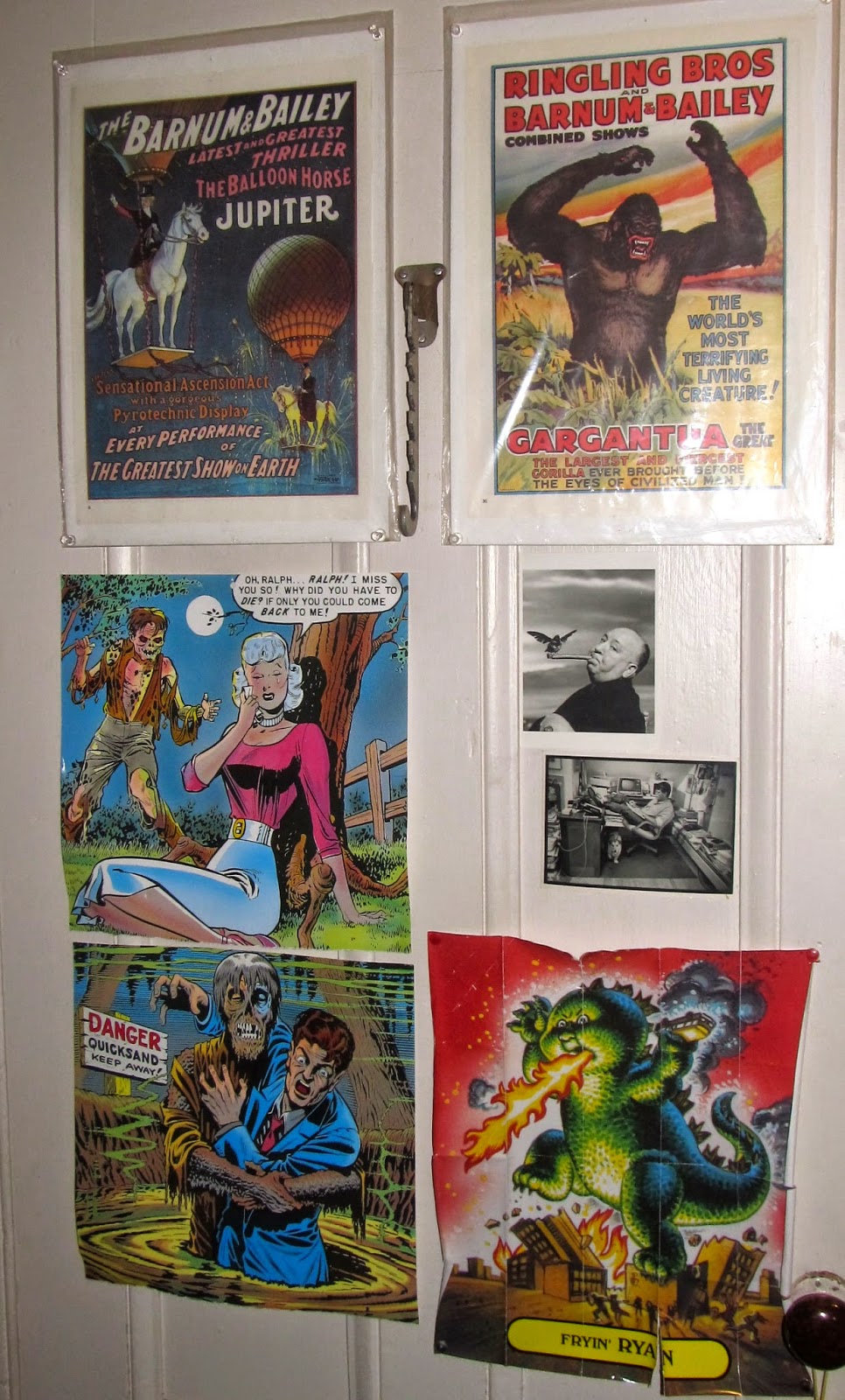 Here is the inside of the door to the cave. Some old-timey circus posters (reprints) some calendar pages from a Tales from the Crypt calendar, a "Fryin' Ryan" GPK poster, and a couple of postacards feature horror greats, Alfred Hitchcock and Stephen King. Usually there's a big vintage cardboard cutout of a teal-colored skull hanging here as well, but during the month of October he's doing his duty greeting company at the front door.

Here's a look at the shelving unit right next to the door, where I keep DVDs and more toys. What's of interest here is the set of posters, post-cards, and other images I've collected together here. Everything from old movie posters (more calendar repros) to the X-Files and Scooby-Doo... to other things I'll let you discover on your own. 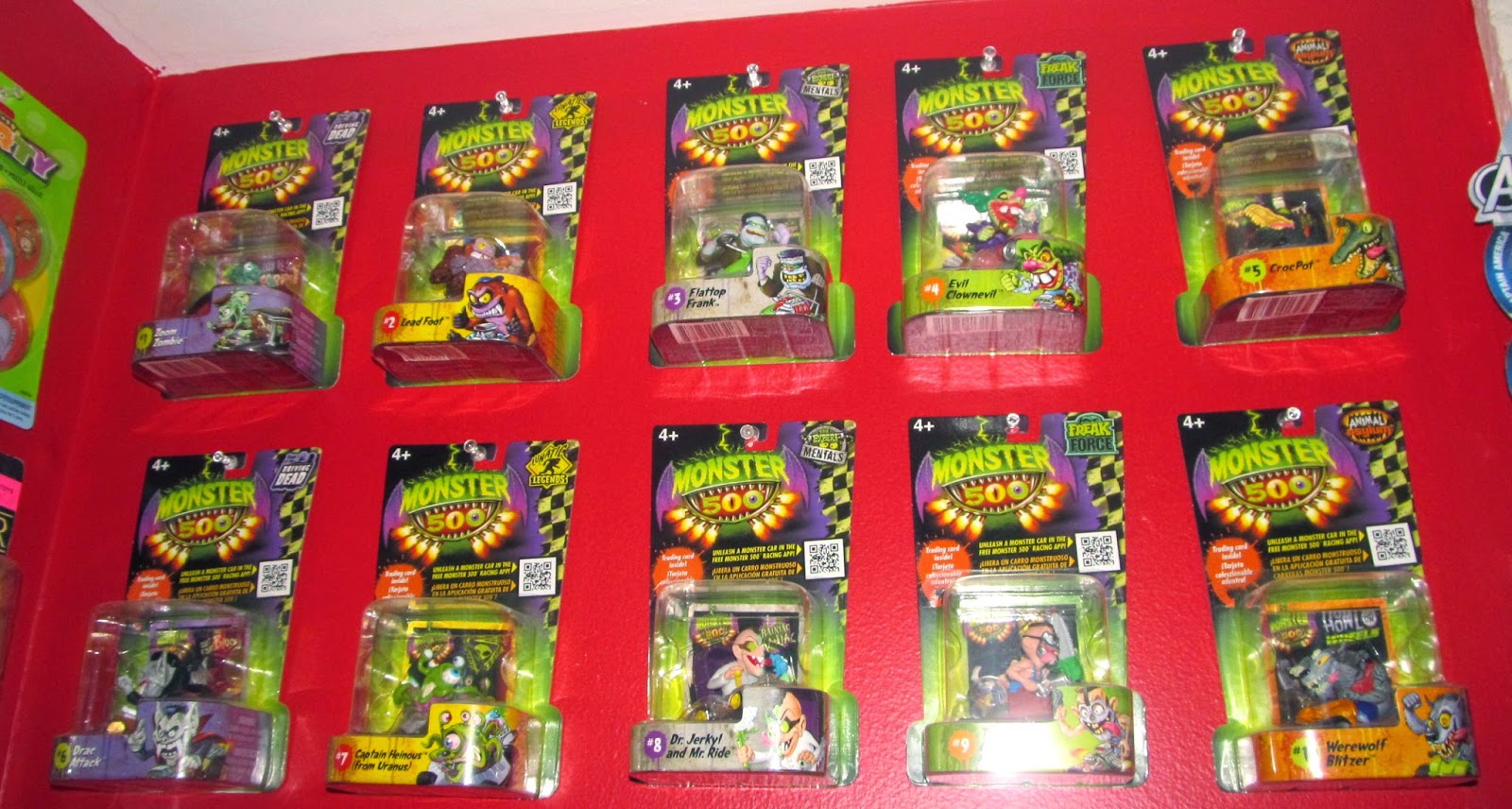 Here's my set of Monster 500 cars from Toys R' Us. Before anyone bugs me about why I didn't buy the 3-packs because they're cheaper... I like the way they look better individually packed. I don't open toy cars. This is how I display them. And I like the look to be consistent. I love this series because it combines everything cool about monsters with everything I consider to be cool about the old Rat-Fink style car artistry of yesteryear. They have a sort of Wacky Racers vibe to them as well. 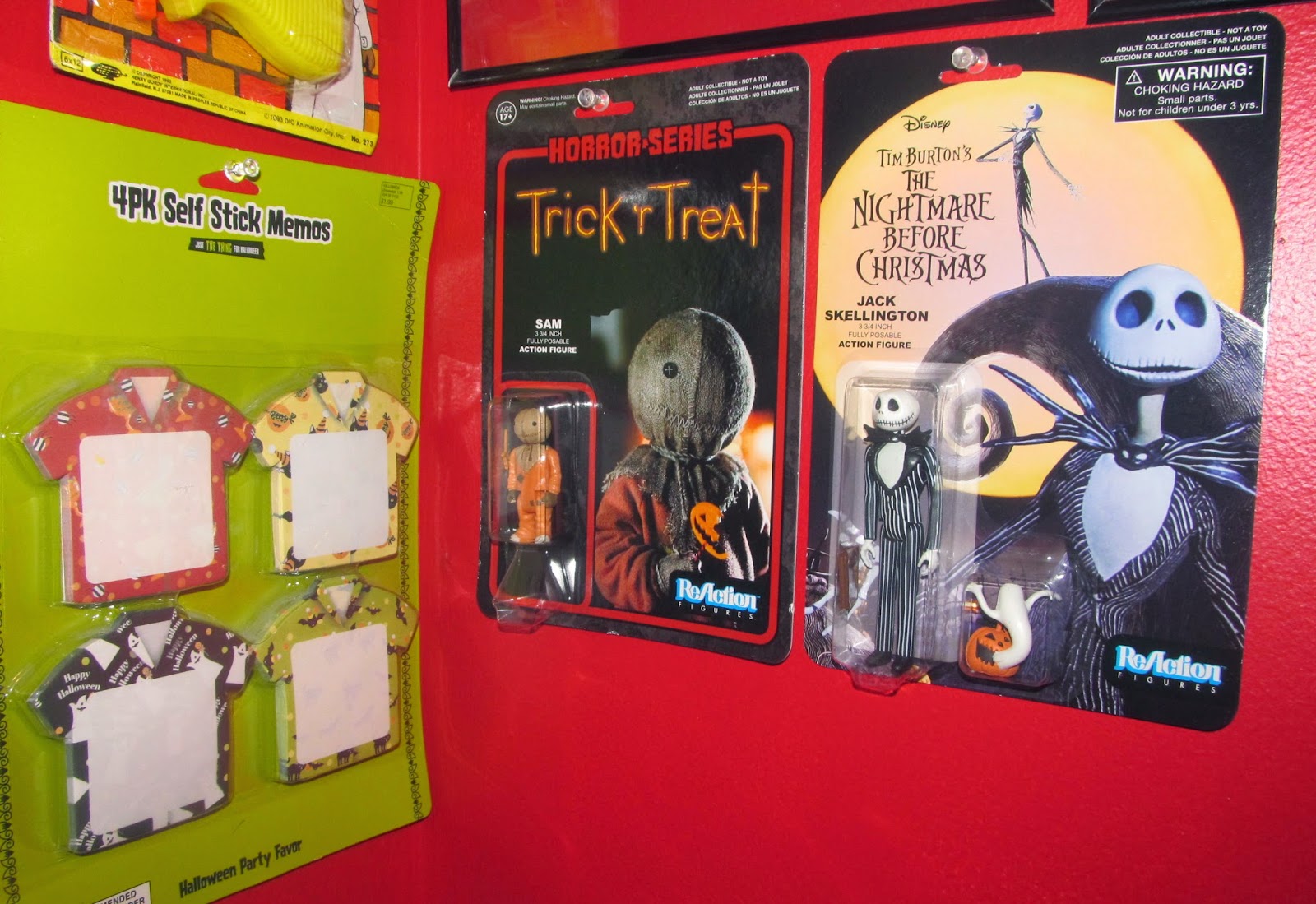 About a foot below my Monster 500 cars are these bad boys. I realized as I was taking the picture that I also have this weird four-pack of post-it notes shaped like Hawaiian shirts, but with Halloween designs on them, hanging right next to the awesome ReAction figures. So I kept that in the shot too. I knew when they announced the release of the ReAction lines that Sam and Jack would be my first two purchases. 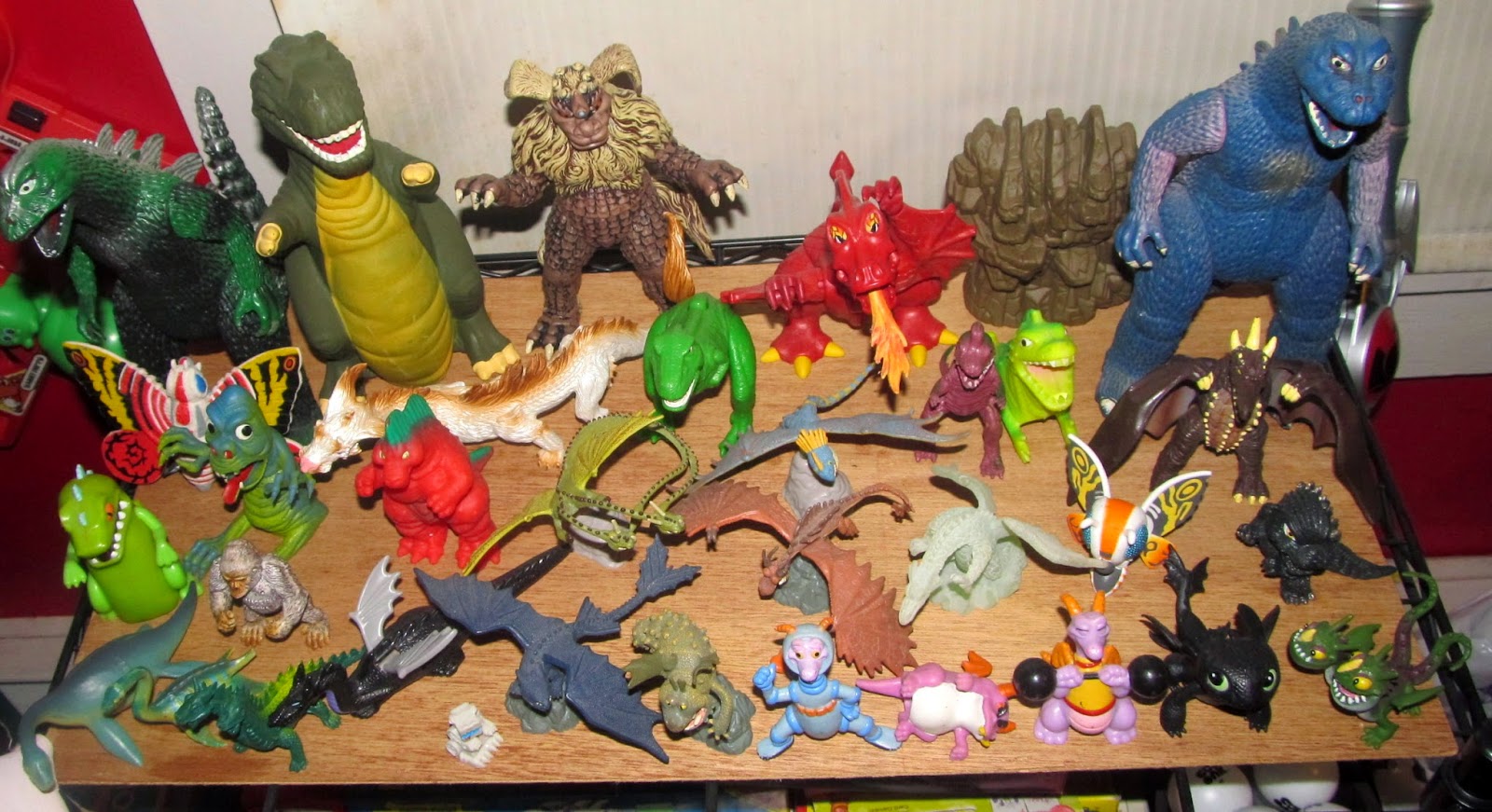 I also have a little table full of dragons, dinosaurs, and kaiju. This is stretching the Halloween theme a bit, I know, but I feel only a little. Dragons and Kaiju (and even dinosaurs to an extent) can all be categorized as monsters easily. 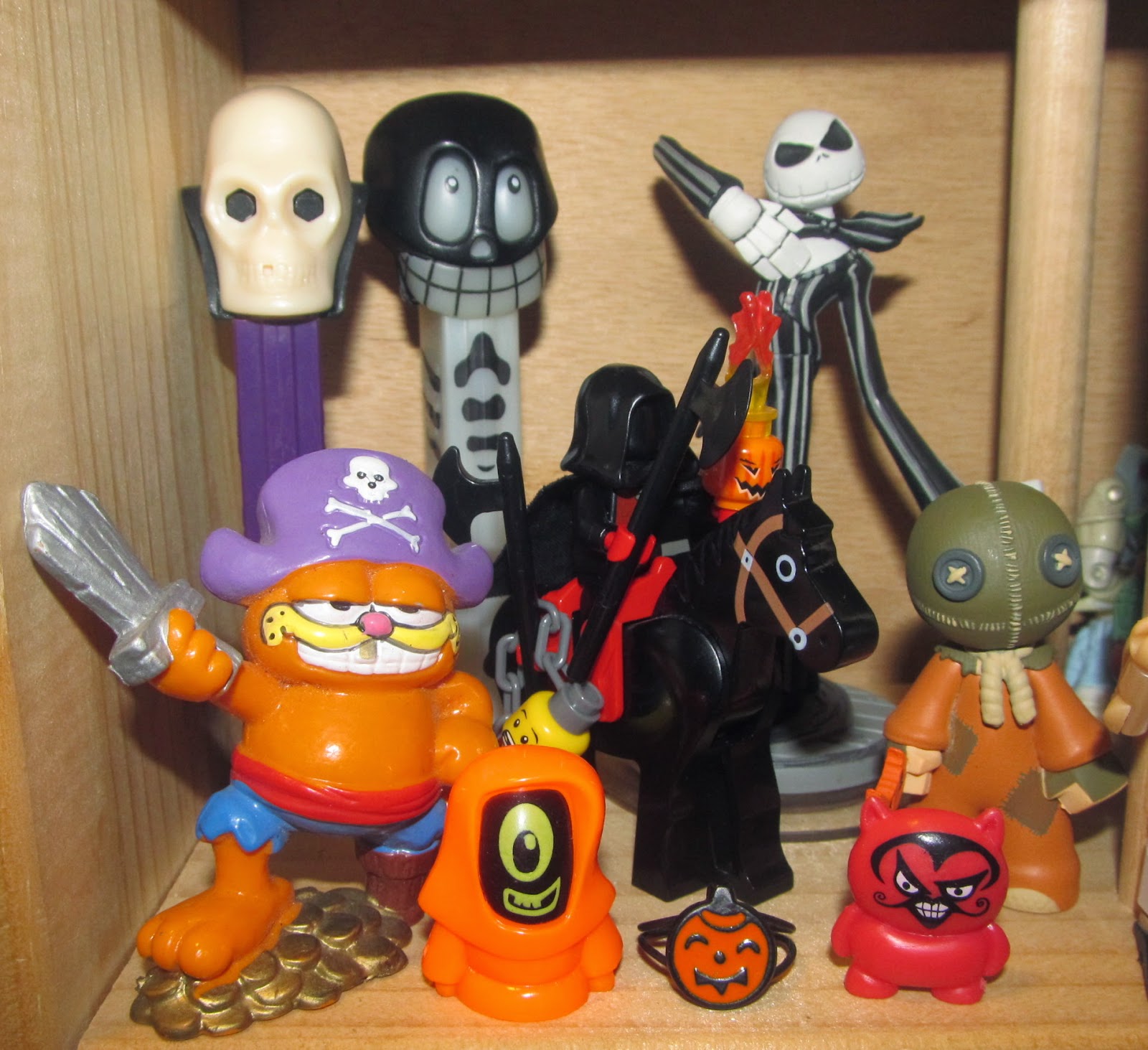 And to wrap things up, we'll end at my desk, in the tiny little alcove where my very favorite Halloween toys hang out. Here we have yet MORE versions of Jack Skellington and Sam from Trick r' Treat, alongside a LEGO custom I made of the Headless horseman. Two of my all-time favorite Halloween PEZ dispensors in the back, and some tiny Halloween tchotchkes in a Crazy Bones orange and black cyclopean ghoul, a tiny metal Jack-o'-Lantern ring, and a portly vending machine devil. But by far the star of THIS show is Garfield in disguise there, from his Halloween special. He was an eBay find, and I believe he was produced and sold in Germany back in the 80's, making it very hard to find here in the states these days. But Garfield just IS Halloween to me. So he's a very prized possession of mine indeed.

So that's it! There's actually SO much more to the cave than this very specialized and fine tuned Haloween-themed tour, but we'll get to all of that some other day. I'll be back soon with some Grizzly Goodwill Goodies sooner rather than later. Until then, Happy Haunting!
Posted by Derek Ash at 6:54 PM