Another trip out to the Brewer Goodwill yielded a much smaller crop of Halloween goodies this time around, but some other great finds were made... so let's see what I brought home! 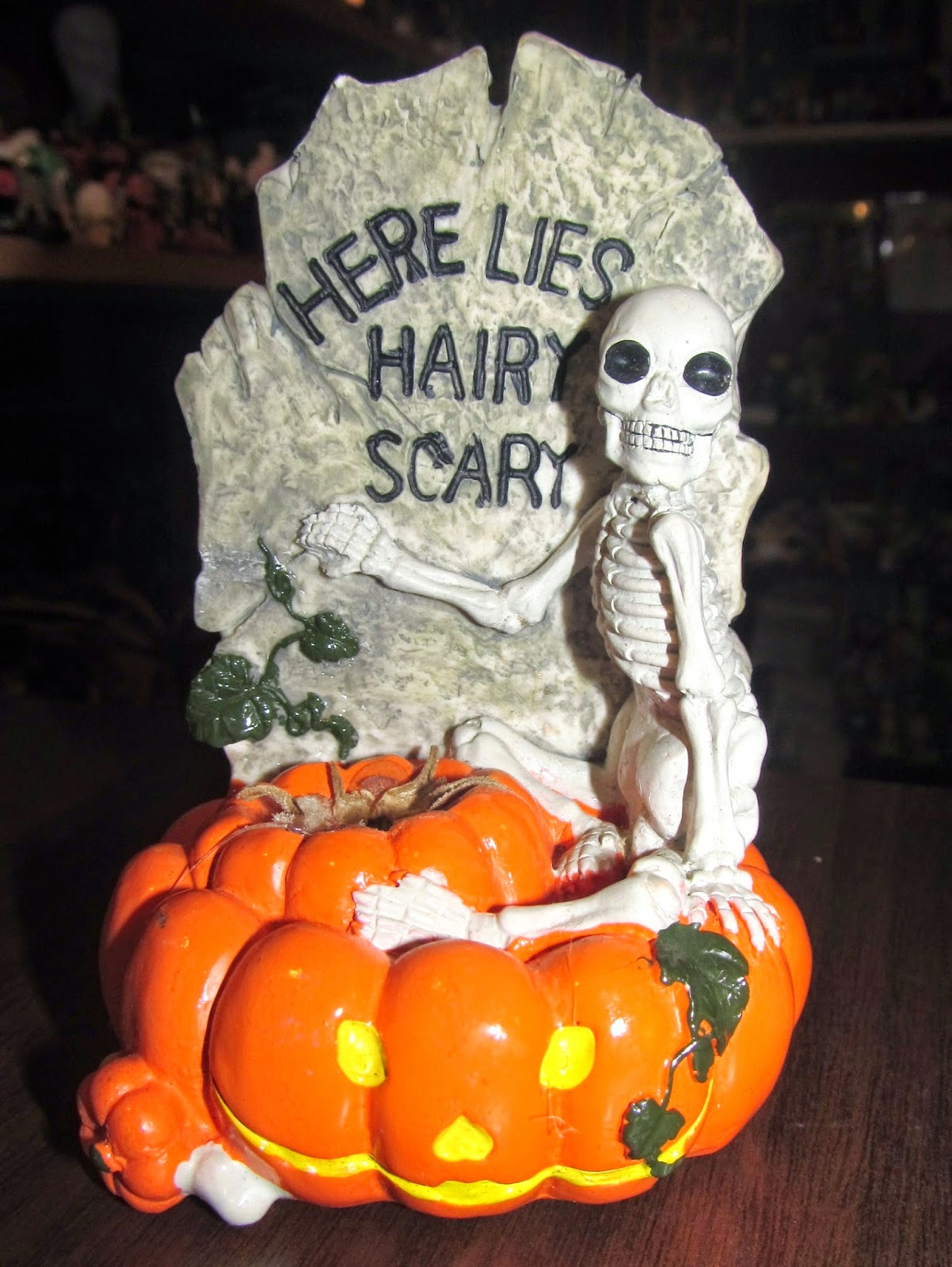 At first, I couldn't figure out what these first two items were... and then it dawned on me that they were tiny cactus plants-holders! Someone had long-ago let the cactii die in them, and then donated them to Goodwill. Did NOT matter to me as I was more than willing to remove the remains of the long-gone plants and use these to populate my little Halloween village. The first one here features a skeleton and a gravestone for "Hairy Scary". 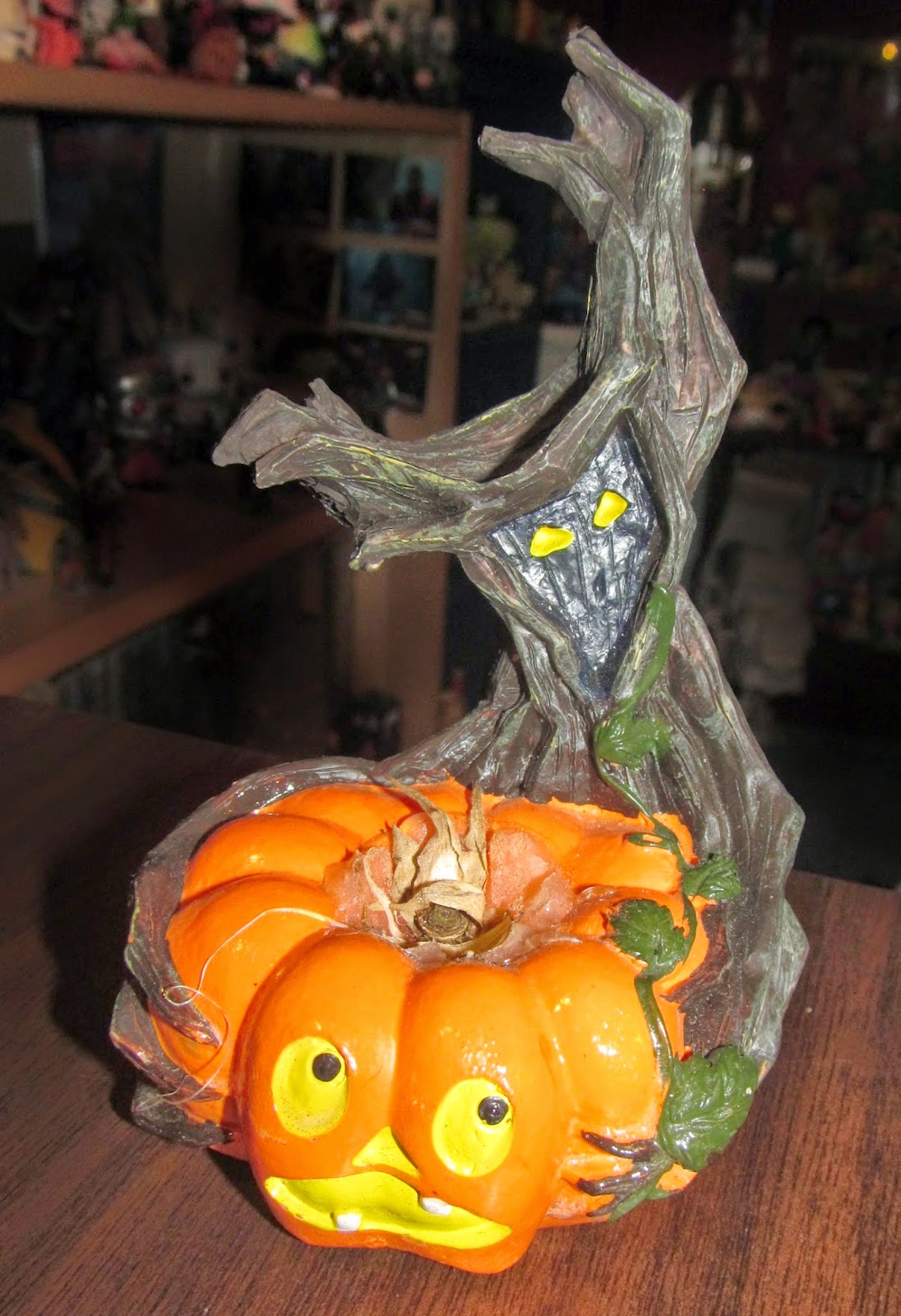 I much prefer this one though, featuring an evil tree hugging a terrified jack-o'-lantern. I want a hug too. I bet this guy gives out free hugs all DAY long. 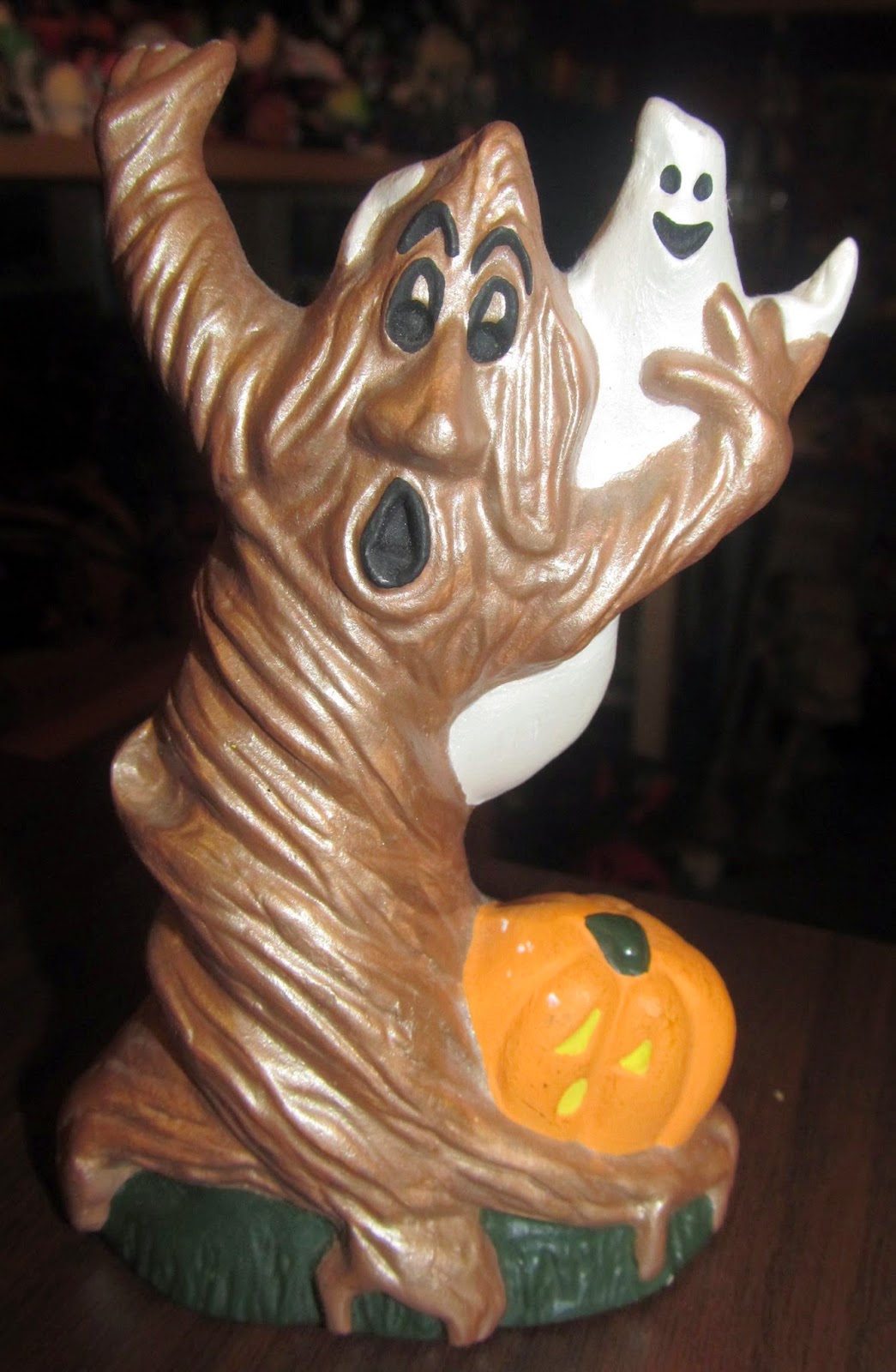 The final genuinely Halloween-y item of this trip was this little ceramic tree complete with ghost and jack-o'-lantern. No cactus remains involved here, just a nice little addition to the Halloween village. 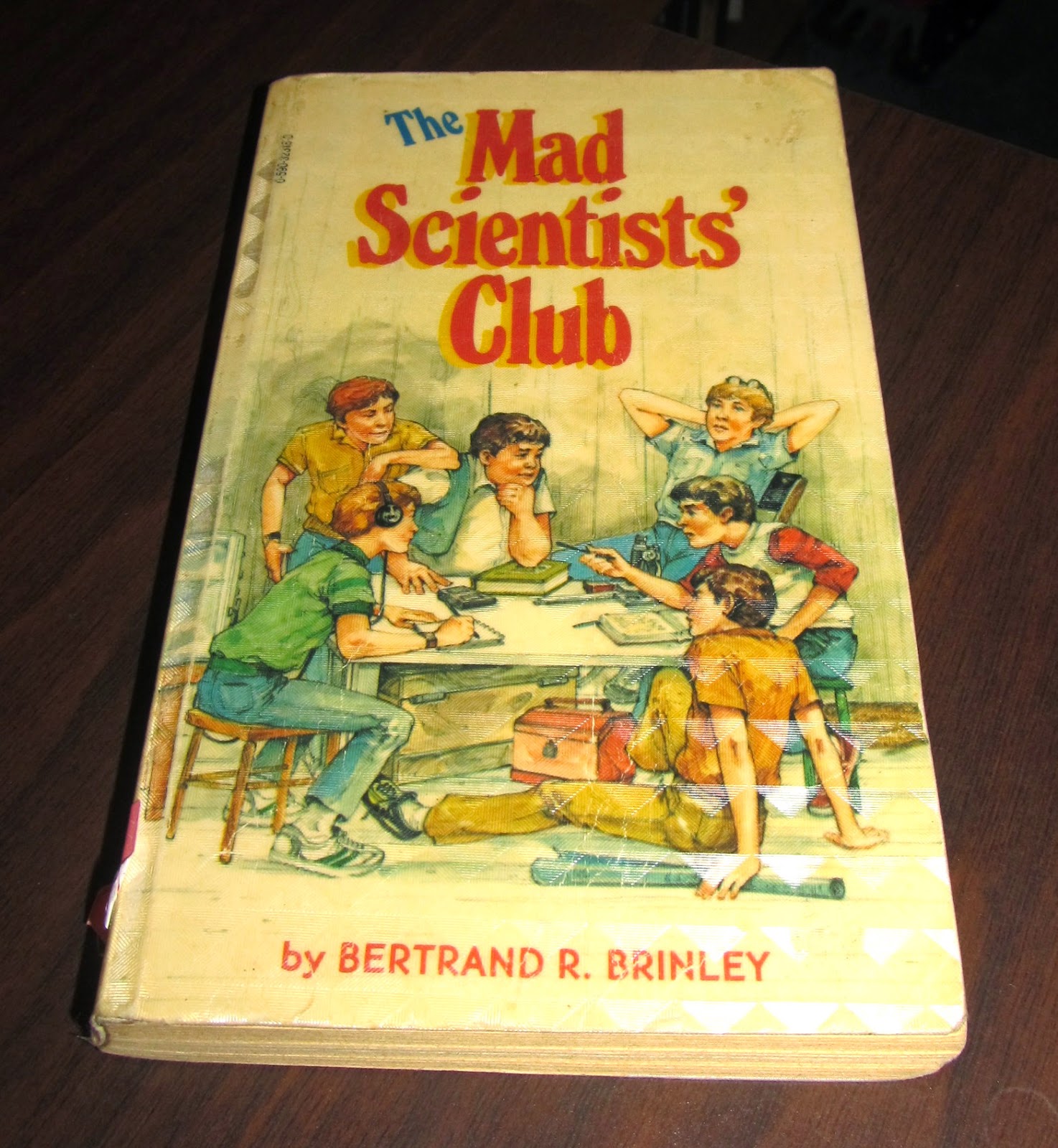 Still half-in-and-half-out of Halloweentown, we find this copy of the Mad Scientists Club, which is a collection of short stories from the 50's and 60's that originally appeared in "Boys' Life" magazine, featuring the same group of boys each time. A strange sea monster appears on the lake...a fortune is unearthed from an old cannon ...a valuable dinosaur egg is stolen.... don't these all sound at least mildly Halloween-ish? Huh? Huh? 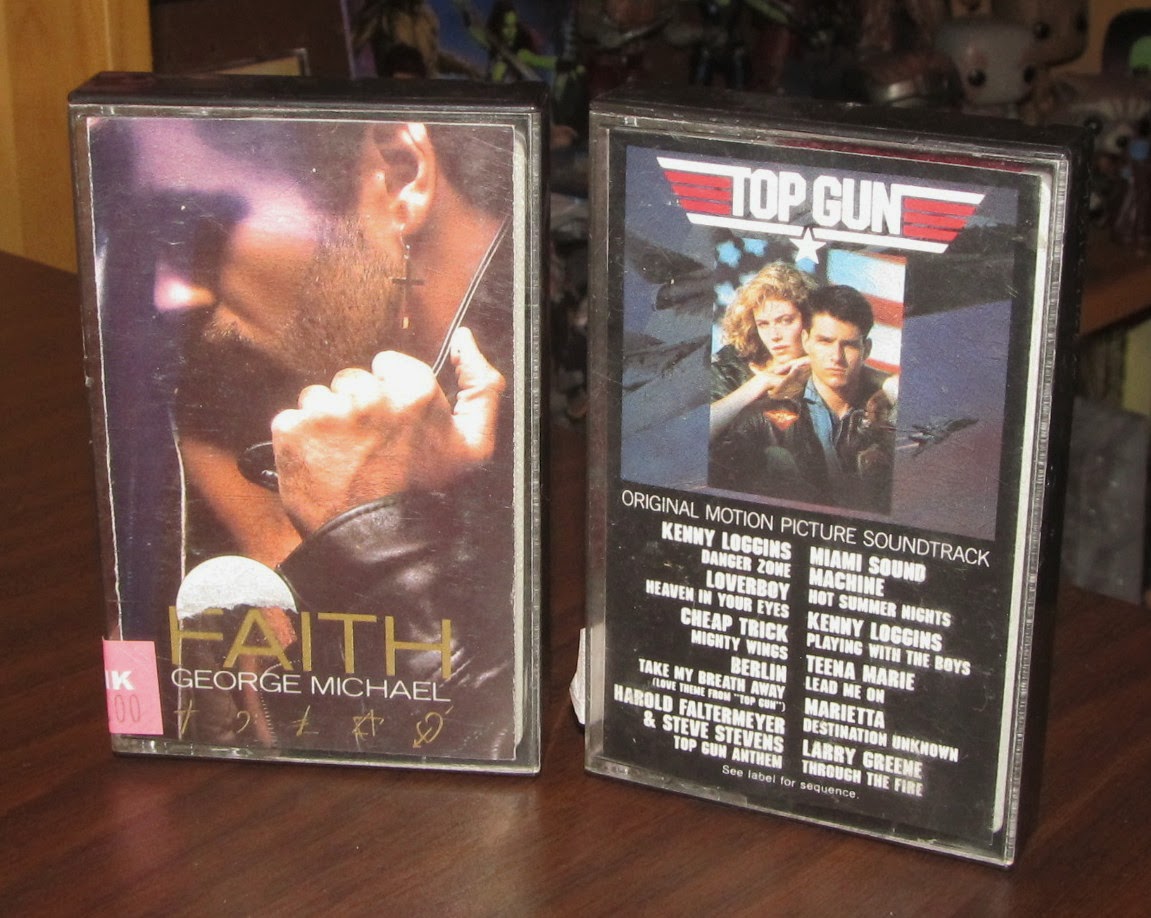 Before George Michael became a bathroom predator he put out some pretty great music. I grabbed a copy of "Faith" on cassette, and a copy of the Top Gun Soundtrack for my cassette collection! 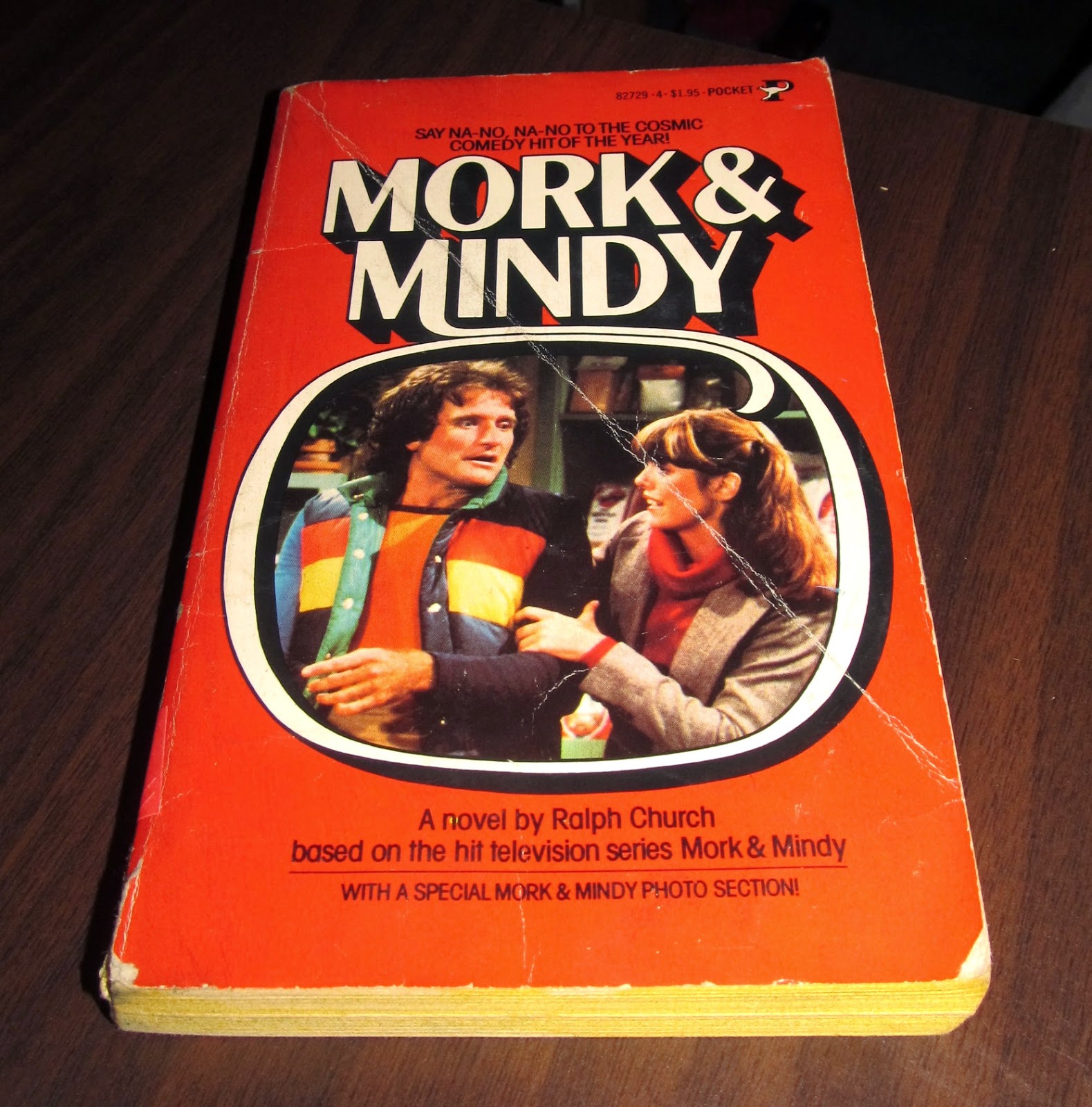 A Mork and Mindy novelization to add to my collection as well! I have a Fotonovel already, and now I have a true chapter book about Mork from Ork! 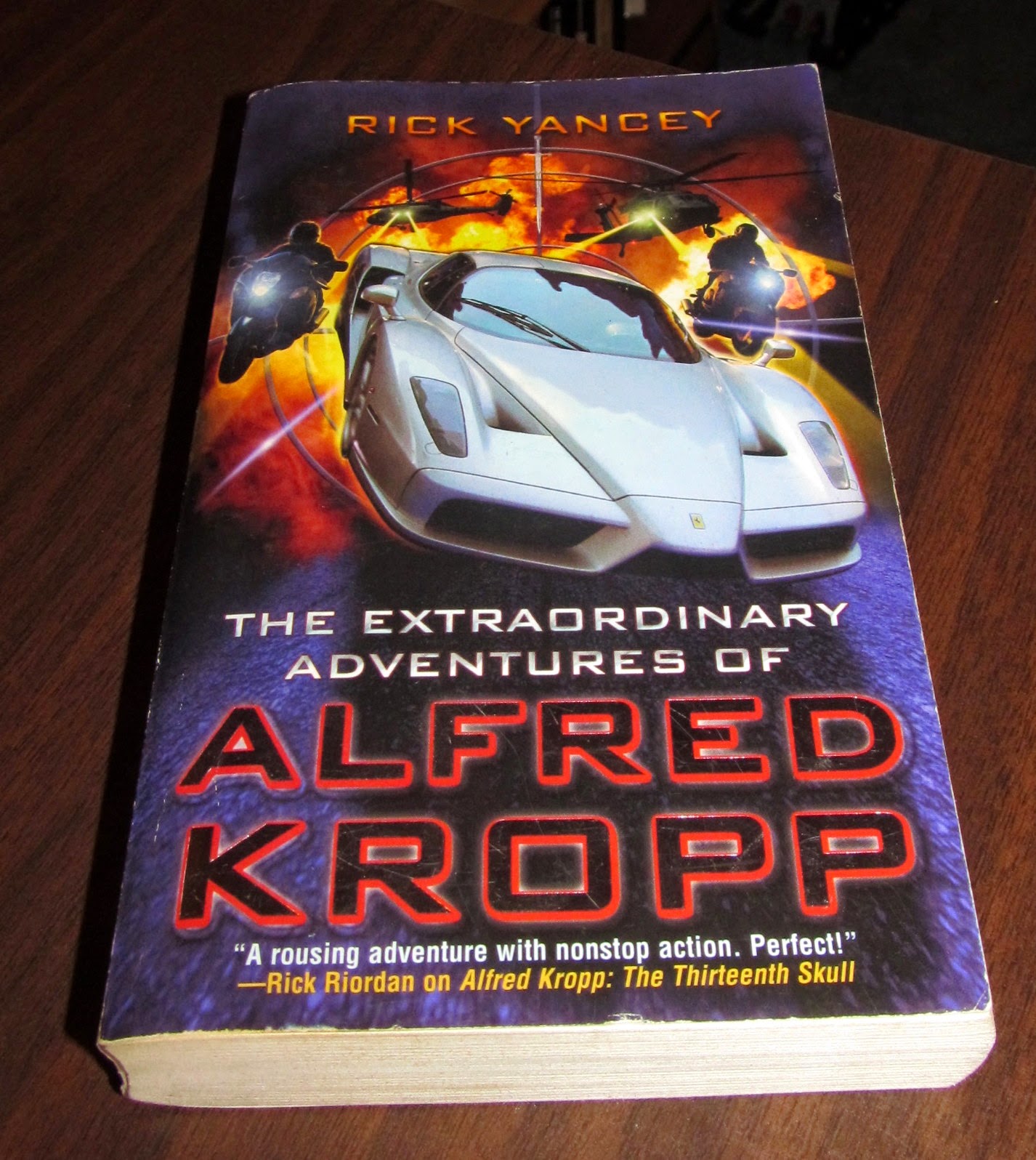 I have gone on endlessly before about Rick Yancey's novels on the blog before. I already own a copy of this very book in fact, The Extraordinary Adventures of Alfred Kropp. I loved it. So when I found a copy of the book that is the same SIZE as the other two books in the series, I snapped it up. I actually am kind of vaguely sorry that this kind of symmetry even matters to me... but here we are. Anyway, this story has to do with a loser of a kid who finds himself plunged into a life of danger and intrigue because of a connection to a society descended from the knights of the Roundtable. It's all pretty awesome. 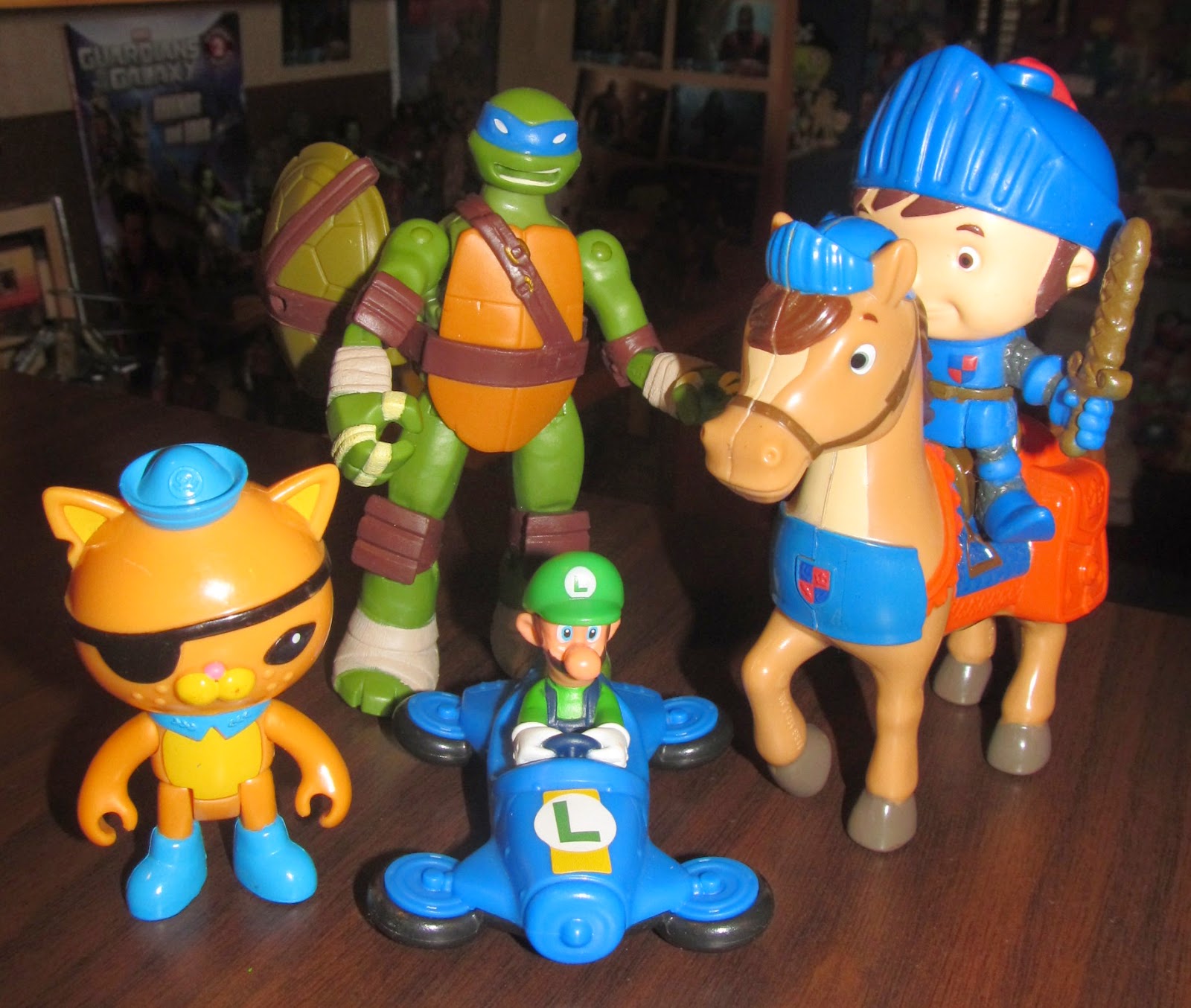 I bought this grab-bag pretty much just for Luigi in his Mario Kart... but let's be honest, I wanted the sailor cat with an eye-patch too, even though I know he's from a PBS Kids show. Cats with eyepatches are cool. I didn't mind bringing home a Battle-Shell Leonardo either, though I don't collect the Battle-Shell figures and would not have bought it on its own. Mike the Knight? I hate. He will be re-donated. Now onto the mega-exciting find of this trip: 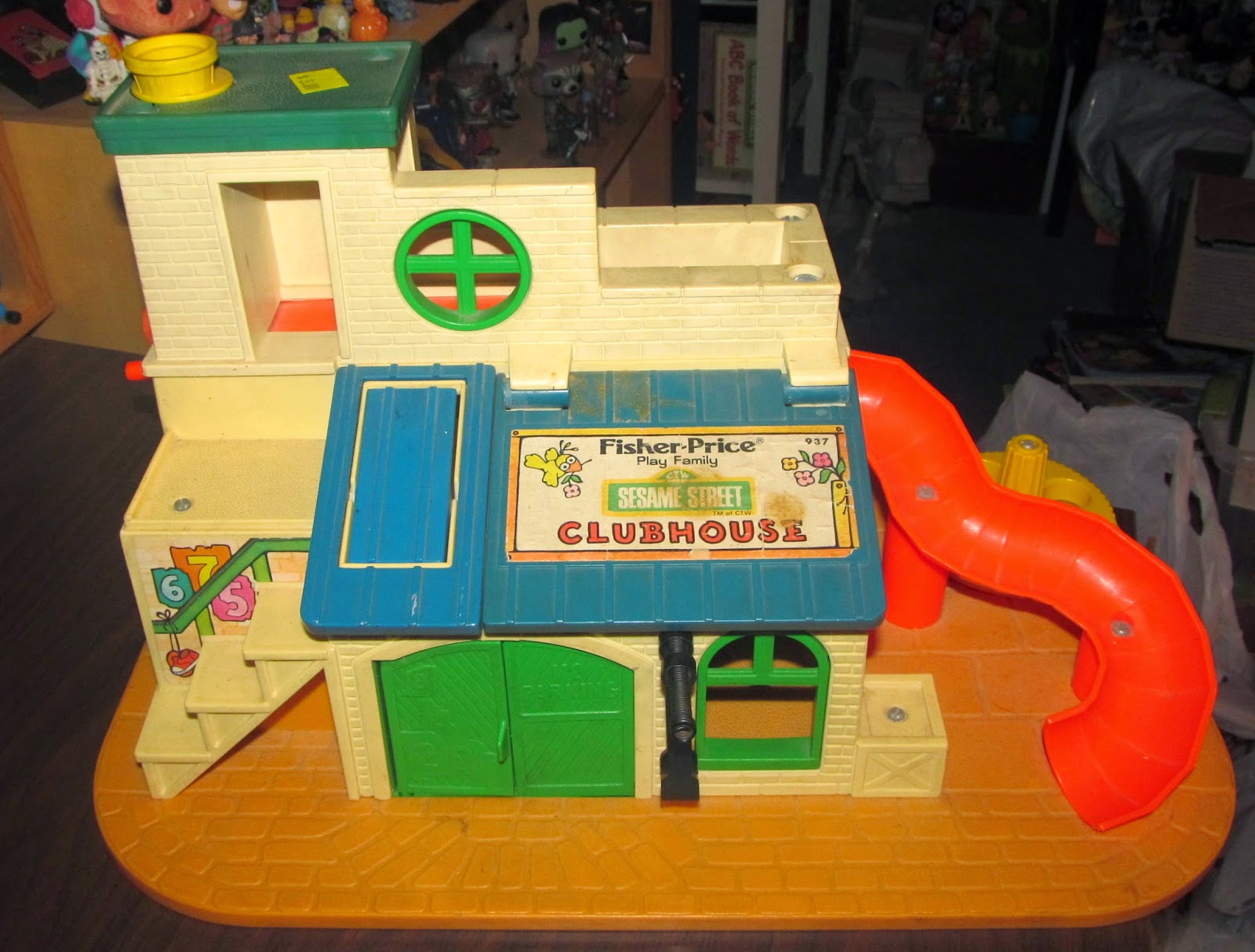 Ta-da!!! The Fisher Price Play Family Sesame Street Clubhouse!!! Now... calm down. It had absolutely no accessories or figures along with it, and there were no bags with those in them anywhere in sight. There was only the play-set... but man is that enough for me!!! 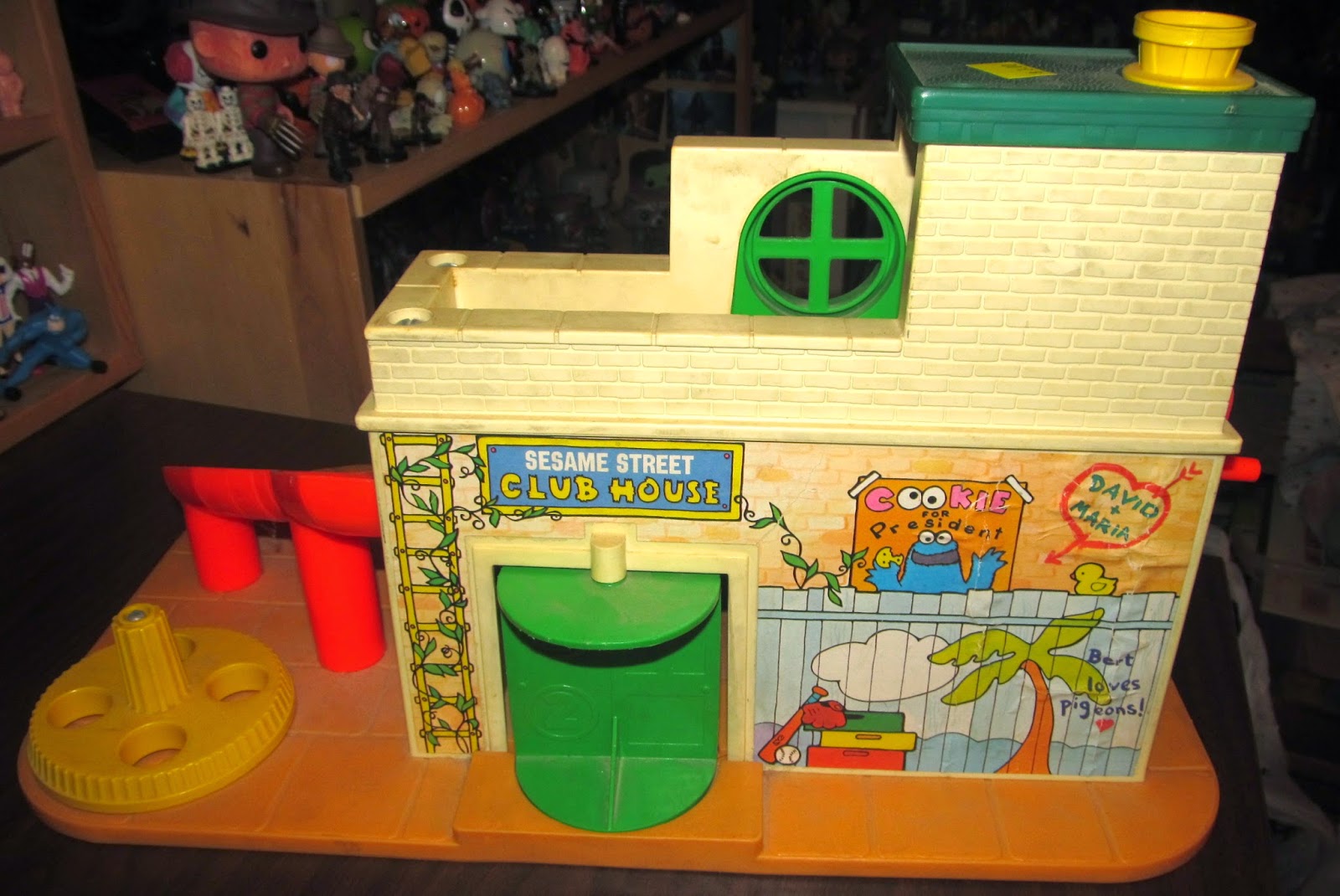 Look at the artwork on this thing! Cookie For President? David + Maria? Bert loves pigeons!!!??? YES PLEASE!!! This thing is in desperate need of a cleaning of course... and I will be cleaning it throughly, believe me... but omigosh the FISHER PRICE PLAY FAMILY SESAME STREET CLUBHOUSE!!! This thing came out before they were even calling them "Little People" people! 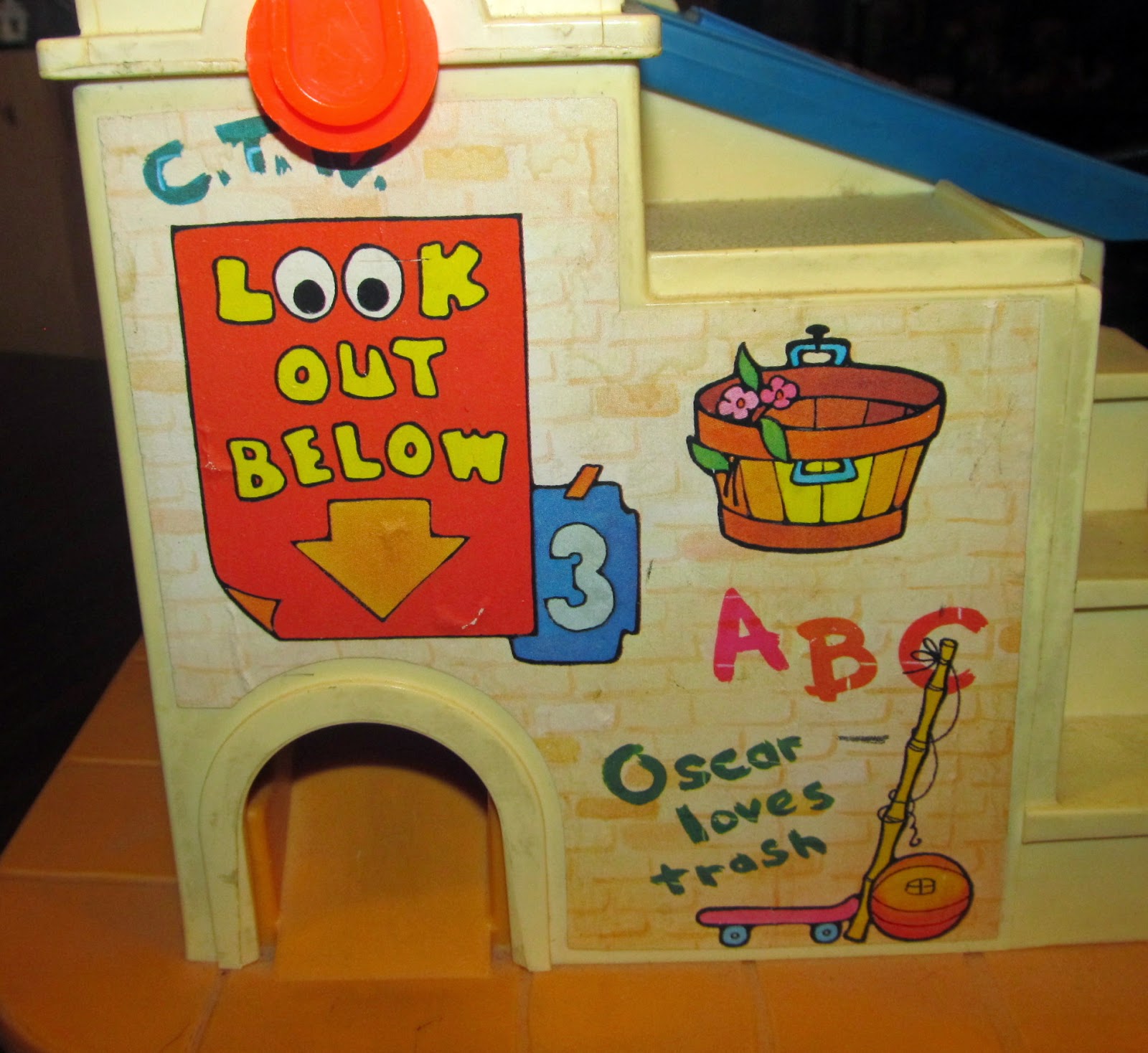 C.T.W.!!! Oscar Loves Trash!!! The real joy of this thing is in the details on the decals. 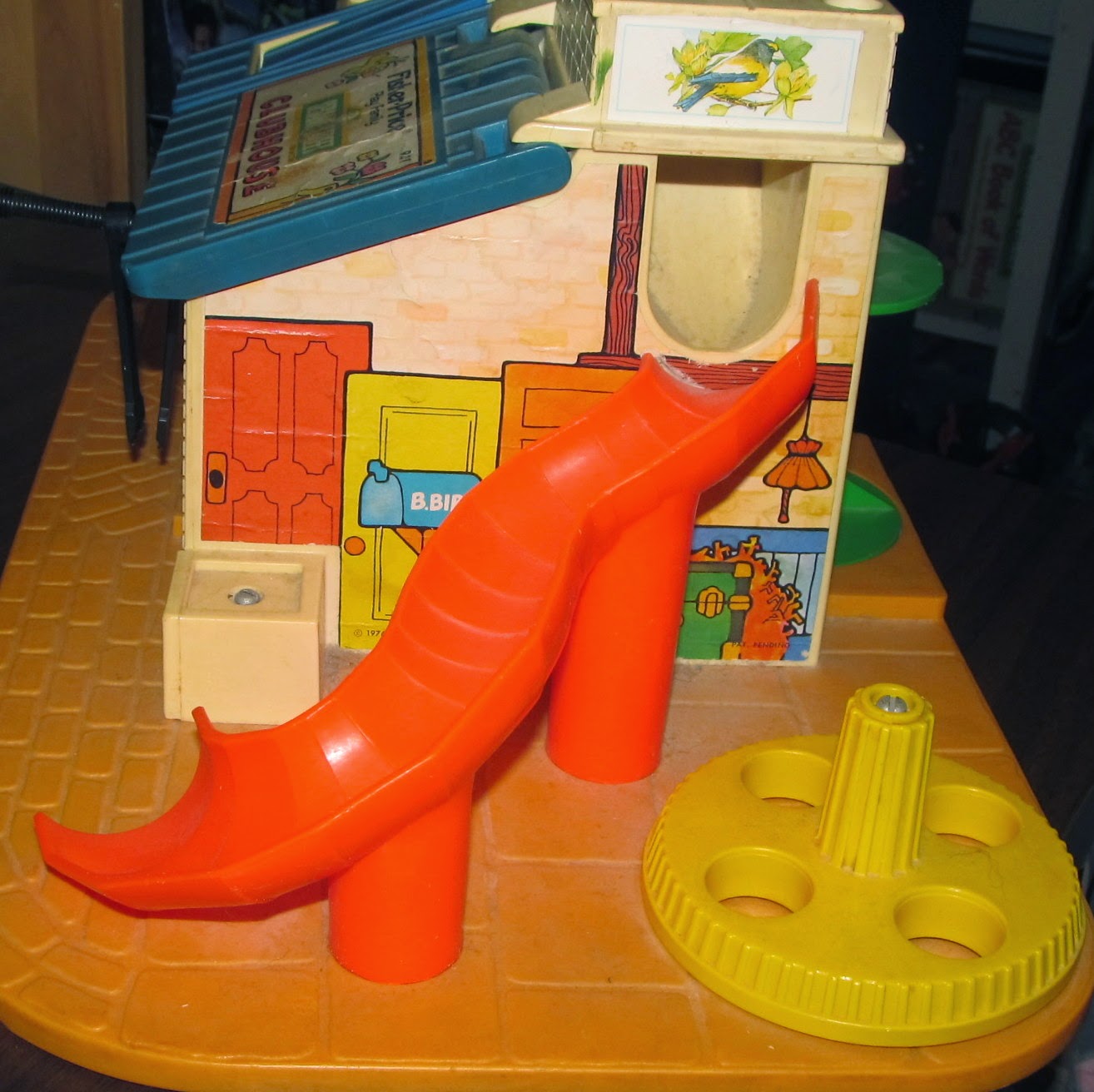 And here behind the slide we can see the doors that surround Big Bird's home. Someone added a random bird sticker sometime long ago too. Now I just need to spend the rest of my life tracking down ALL of the Sesame Street little people (well, besides the ones my wife got me along with the other Sesame Street playset she got me for my birthday a while back...) that go with this thing.

Well, that's it for tonight kids! I'll be back soon with more Groaning Goodwill Goodies! Until then, Happy Haunting!
Posted by Derek Ash at 3:08 PM