There are only 3 days between today and the BIG day ladies and Gentlemen! That means this will probably be my last straight-up "Stuff I Bought at Goodwill" post between now and then, because I'll be focusing more on the festivities around the house and just sort of rounding up anything else I've got to share before the night arrives. So let's take one last look at some Halloween-y items I've picked up at Goodwill! 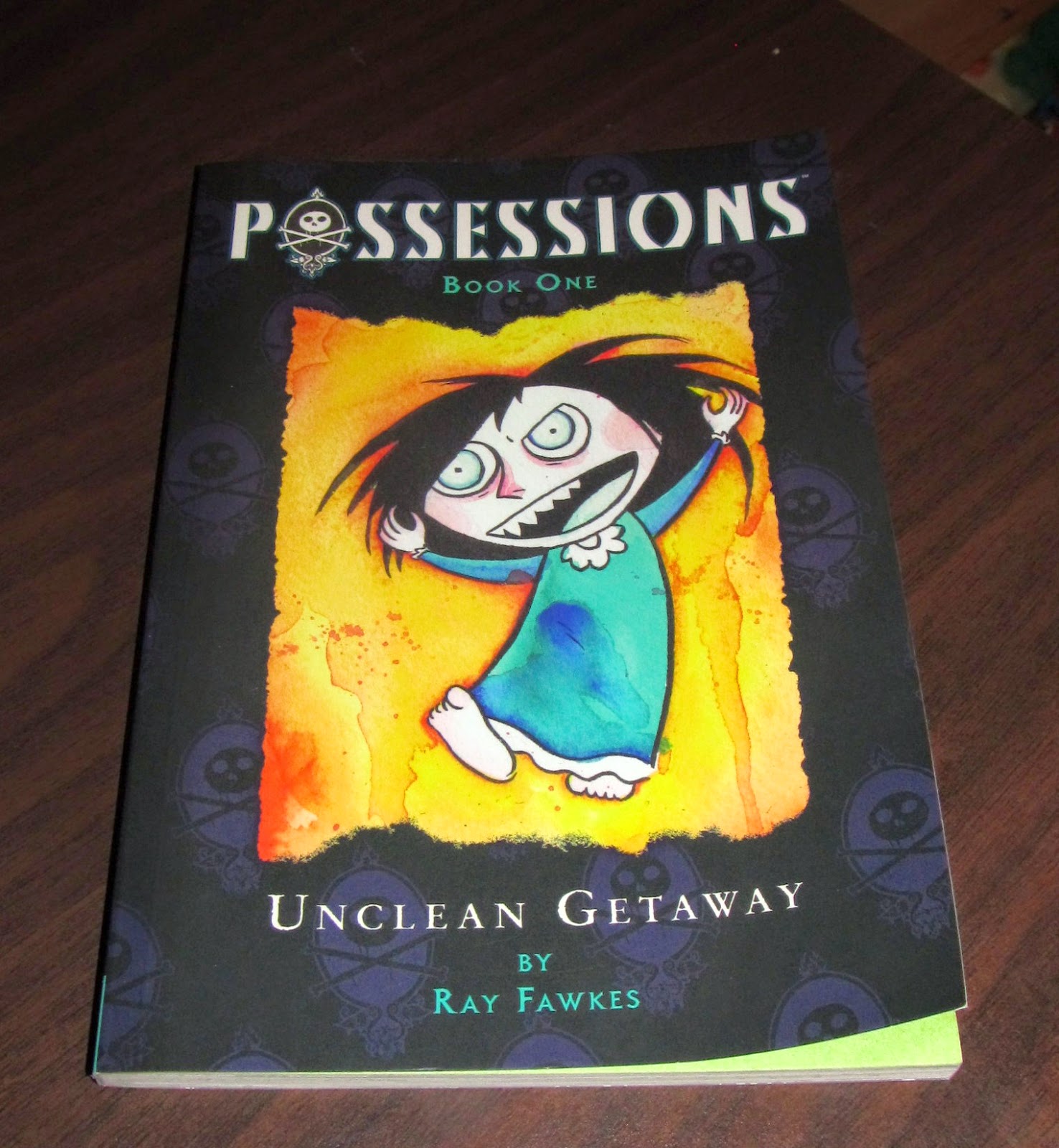 Possessions: Unclean Getaway from Oni Press is a fun little graphic novel starring a young girl possessed by a demon. This girl is added to a collection of supernatural characters including a poltergeist, a haunted jukebox, the ghost of a headless woman, and a talking, glowing sphere. The story is all about the demon Gurgazon the Unclean who has been added to the collection at the Llewellyn-Vane House for Captured Spirits and Ghostly Curiosities, and who desperately wants to escape. It has a distinct "Great Escape" meets "Perhapanauts" vibe, but almost more for the YA reader set. It was definitely a cool little tale, and one I'll probably check out the following three volumes for. "...MORE OF THE NIGHT HE CAME HOME." Ha! I thought I had never seen this movie, but after picking it up at Goodwill and watching it, I realized I must have seen it. I guess this one gets kind of a bad rap... but sitting and watching it back-to-back with the first Halloween, I have to say I kind of enjoyed this one more. There was more going on, the characters were a little more fleshed out, and the pacing was a little more to my liking. It could simply be that I hadn't seen it in so long that it felt new and fresh compared to the very familiar-to-me first film. After rewatching the original Halloween again this year with my daughter, I realized something: There are still some great scenes and classic moments that horror fans NEED to experience, but at times I found myself almost... bored. Sure, parts of the Hospital setting in part 2 (and some of the kill scenes) feel a little hackneyed and hokey... but it does have a nice consistent vibe to it. I don't think it deserves the bad rap it seems to have in some circles. 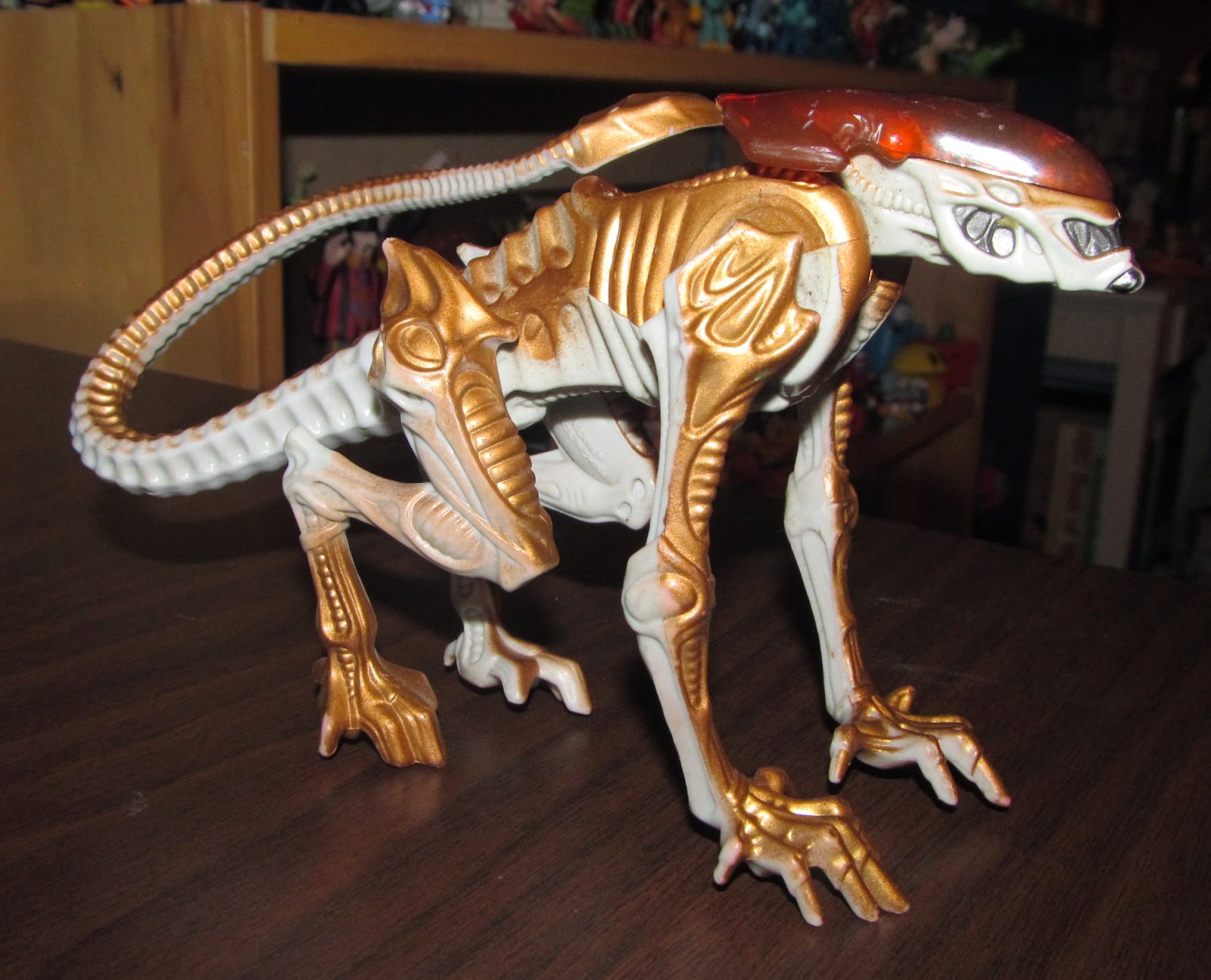 Here we have a "Panther Alien" from the early 90's Alien action figure line. Sadly, he did not come with his projectile, which apparently was some sort of firable parasite creature, but he's still pretty neat. As much as I can admire his sleek frame and interesting pose, not being much of a fan of the oddball Alien figures of various different genuses and species, I passed this guy on to a new home almost immediately. 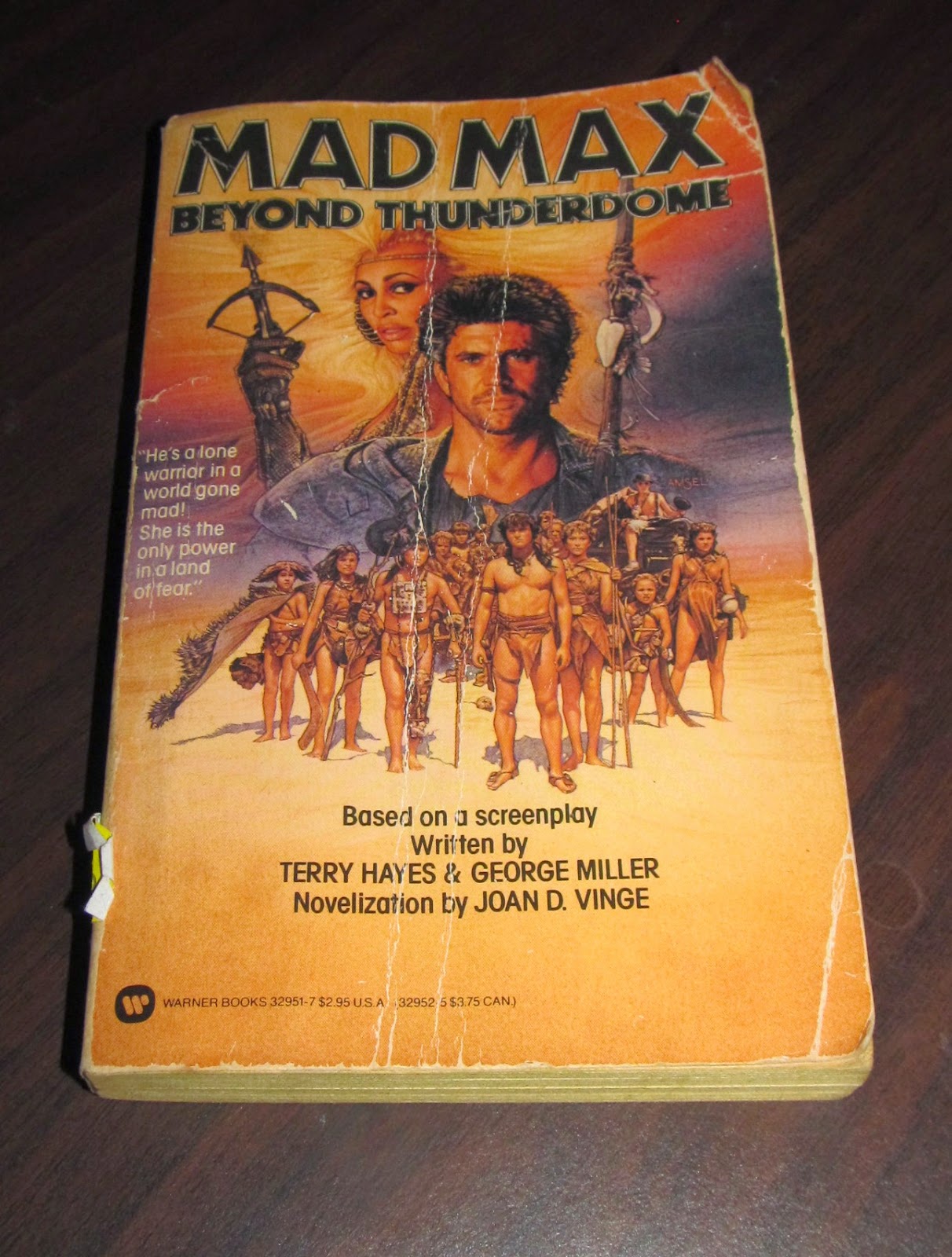 As we leave the city limits of Halloweentown and move on to other things... we find this novelization of Mad Max: Beyond Thunderdome! "He's a lone warrior in a world gone mad! She is the only power in a land of fear." I have not seen Thunderdome in many a year, but I remember it being weird, and disturbing, and really liking it a lot. Again, its a movie that seems to get a bad rap in most reviews I've heard or read, but I don't get it. Finding a novelization of the film really made my day! There was also a grab-bag I picked up that had these three handsome fellows included: a couple different versions of Raphael from the mid-2000's toy line, and a PVC figurine of Robbie from the Dinosaurs sitcom! The Raph on the left does a backflip if you bend him over at the mid-section. The Raph on the right is from the 200's series of toys, a Cave-Turtle character. 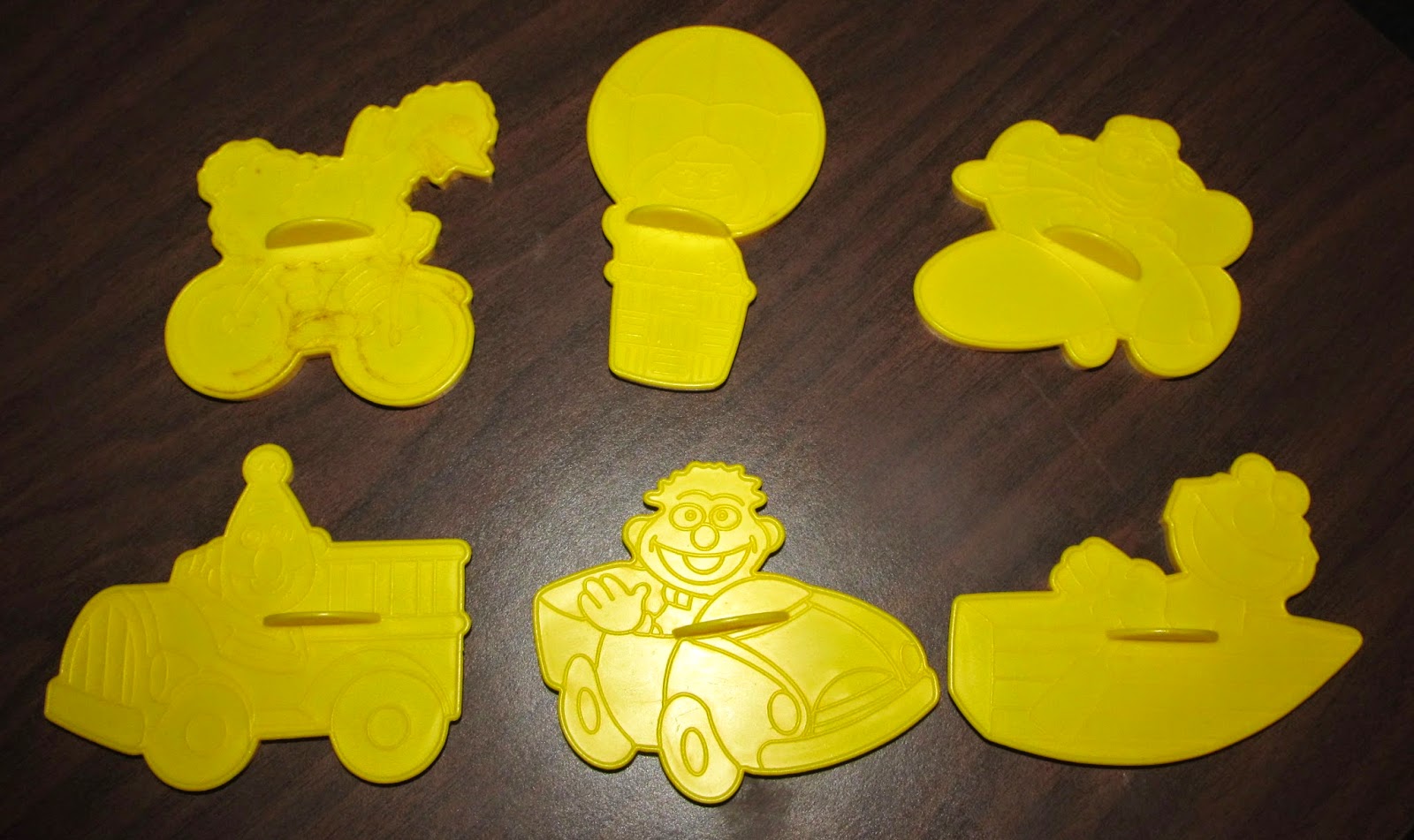 And keeping in line with the Sesame Street theme, we have this set of cookie cutters! Big Bird, Prairie Dawn, Grover, Bert, Ernie, and Elmo, all in different modes of transportation. Not sure if these are true cookie cutters or if they came with a play-doh set or something, but either way I picked up a little baggie of them for .99 cents. 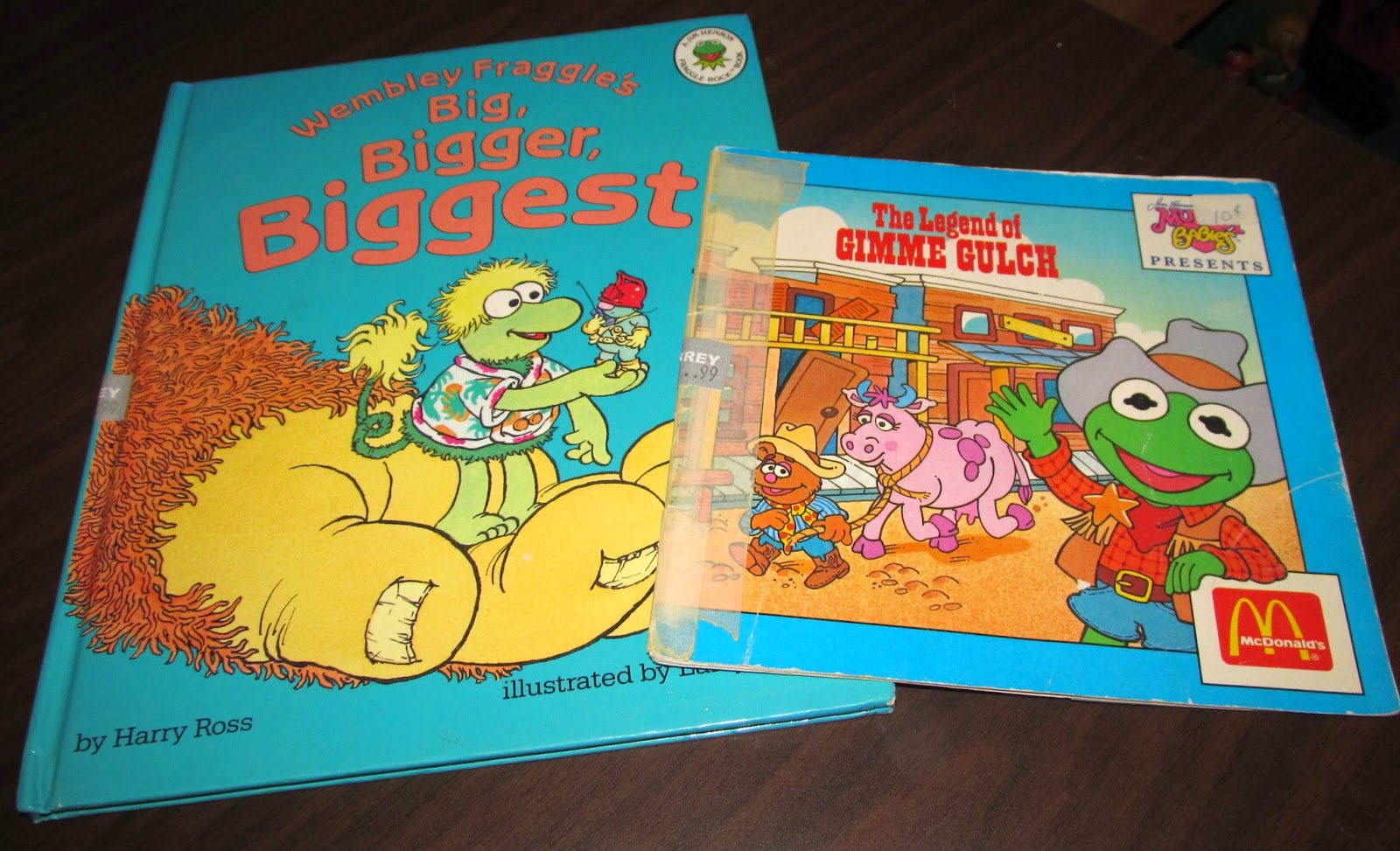 Some more Jim Henson-themed books in a Fraggle story and a Muppet Babies story. 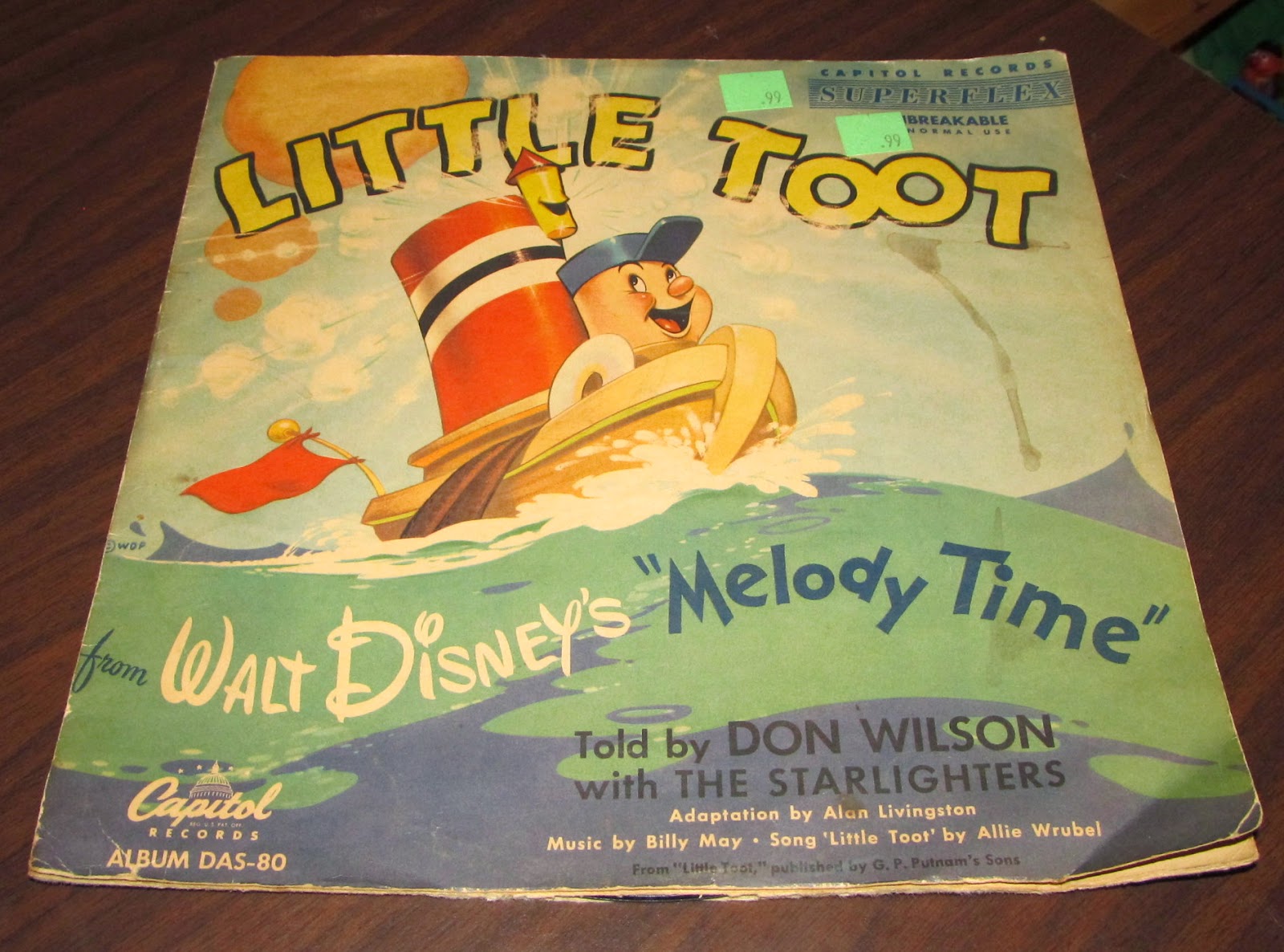 This was an interesting find. "Little Toot from Walt Disney's Melody Time" on a vinyl record. This just caught my eye and had to come home with me. 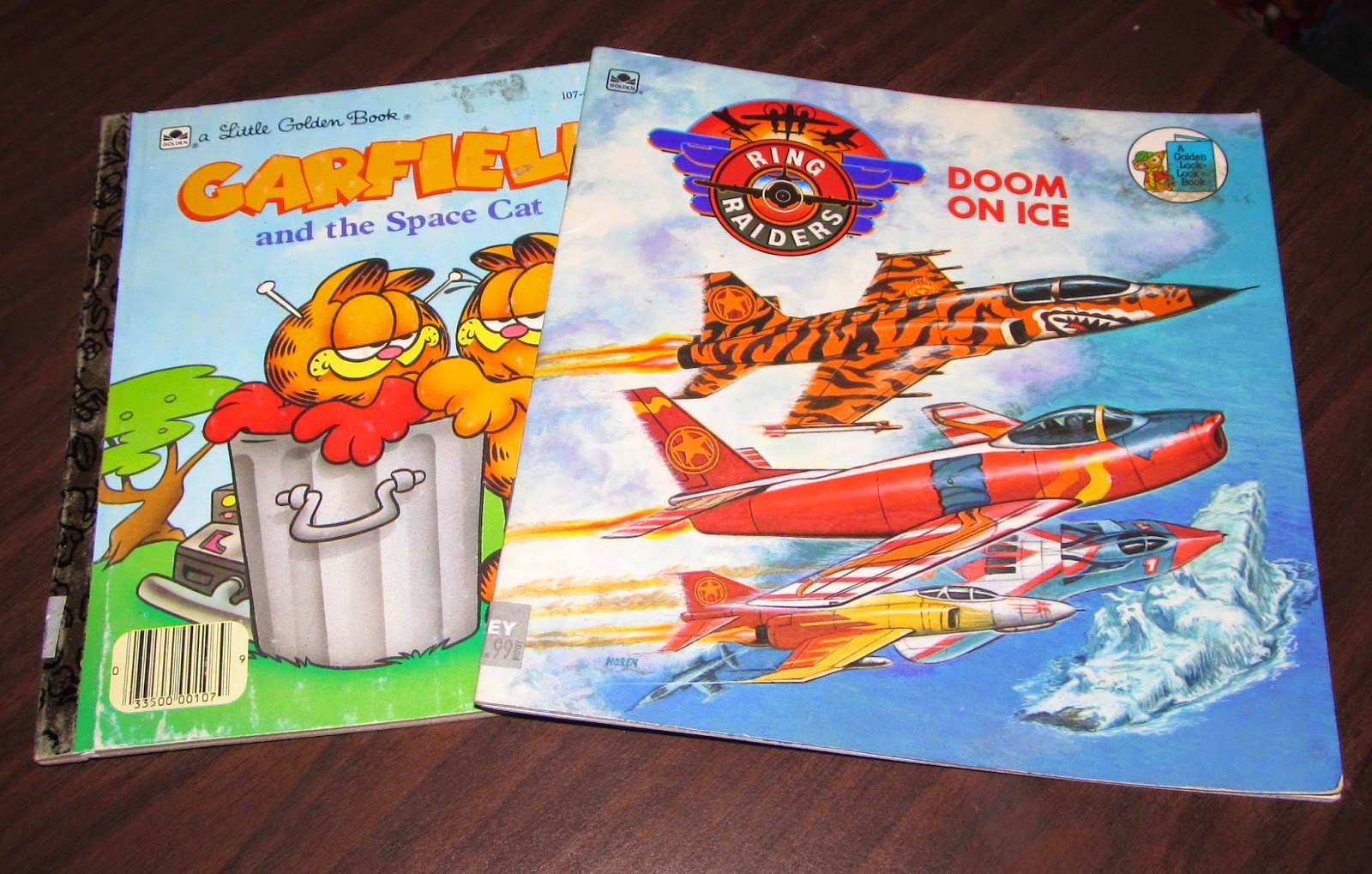 Couple of other random properties here in kids' book form. A Garfield book I already have a copy of that I will probably send off to a friend, and a "Ring Raiders: Doom on Ice" book. Ring Raiders were toyline released by Matchbox back in '89 and consisted of jets that you wore on rings on your fingers. There was also a cartoon show to advertise... I mean to tell the story behind Ring Raiders. 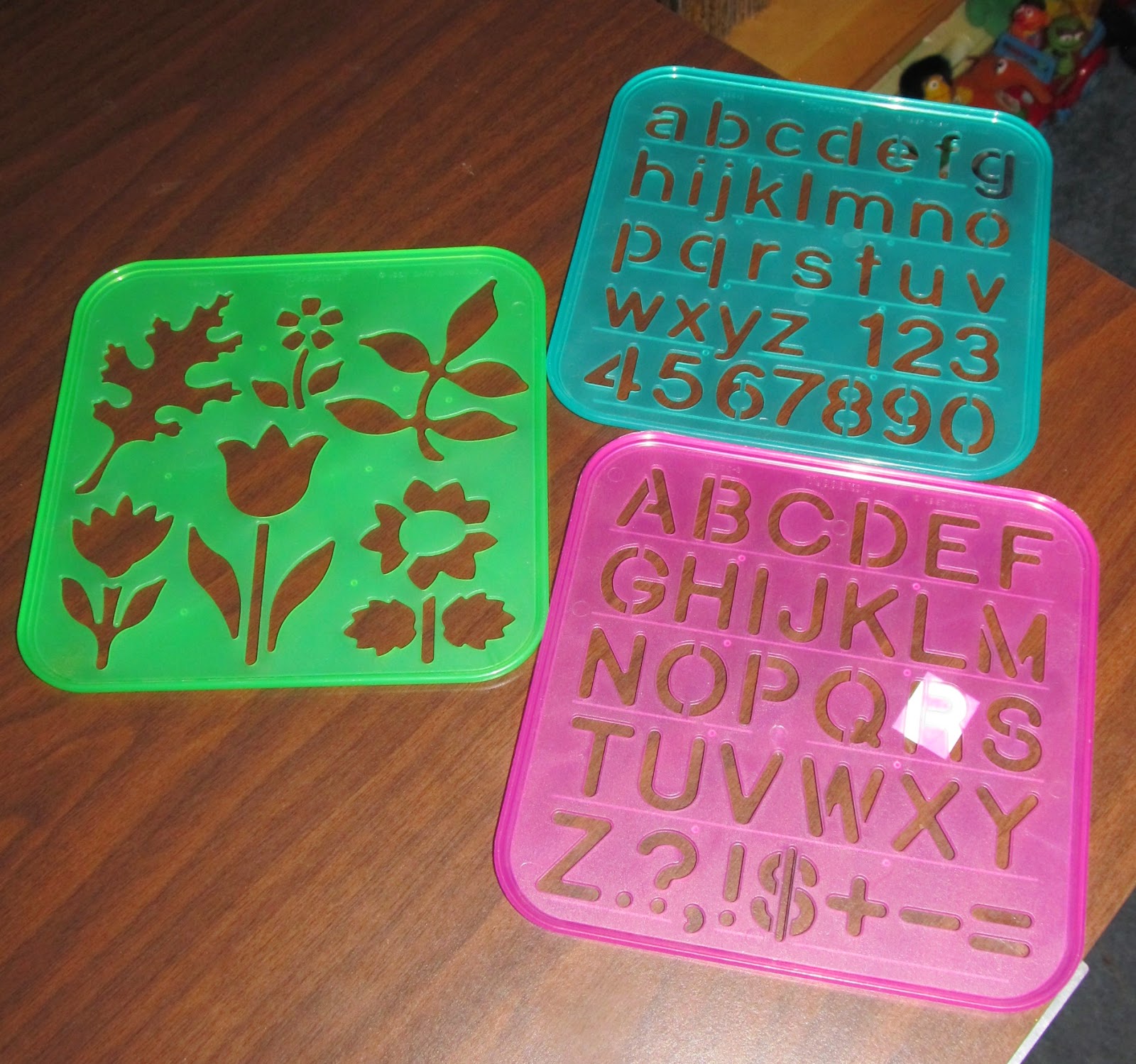 This is a set of Tupperware stencils from the 80's. My wife already owns a complete set of these (missing the yellow case) from when she was a kid. I don't know exactly what I plan on doing with these... but letting my kids play with them is the first idea that springs to mind. Which... is admittedly unusual for me. 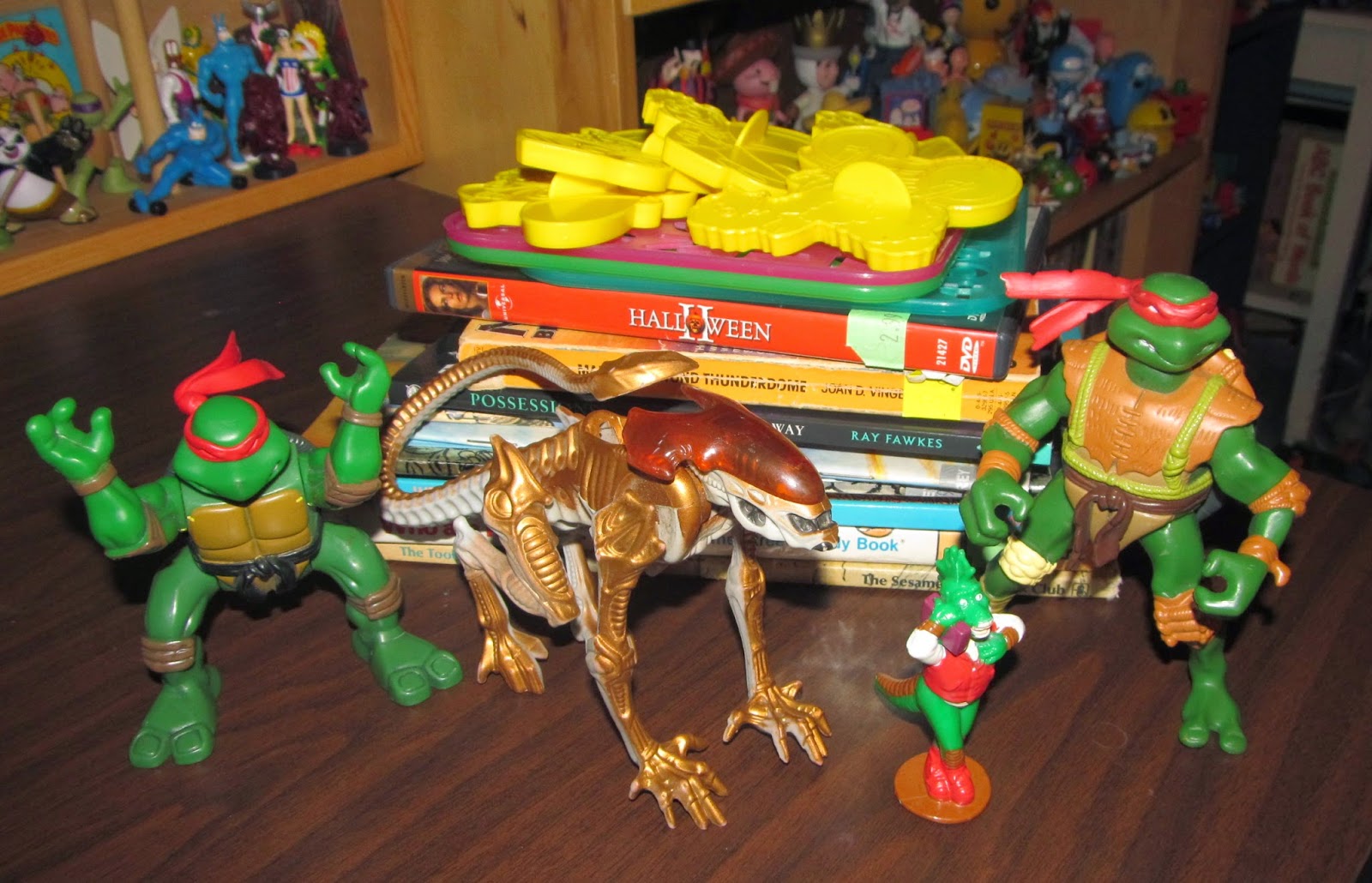 So there you have it! I'll be back soon with more Gutturally Growling Goodwill Goodies... so until then, Happy Haunting!
Posted by Derek Ash at 1:47 PM