So a... WHILE back... I won an instagram (...or was it Twitter? I don't remember now.) contest. And it was actually being done by an online buddy of mine "CRPechonick" (or Charles... or Chuck) who runs the Geek Show Ink blog and site, and whom I'm received goodies from before. He's an incredibly talented artist, and the prize he was giving away in his contest was a sketch card of any character you chose. I... being a Halloween fanatic, knew EXACTLY who I wanted featured on my sketch card. 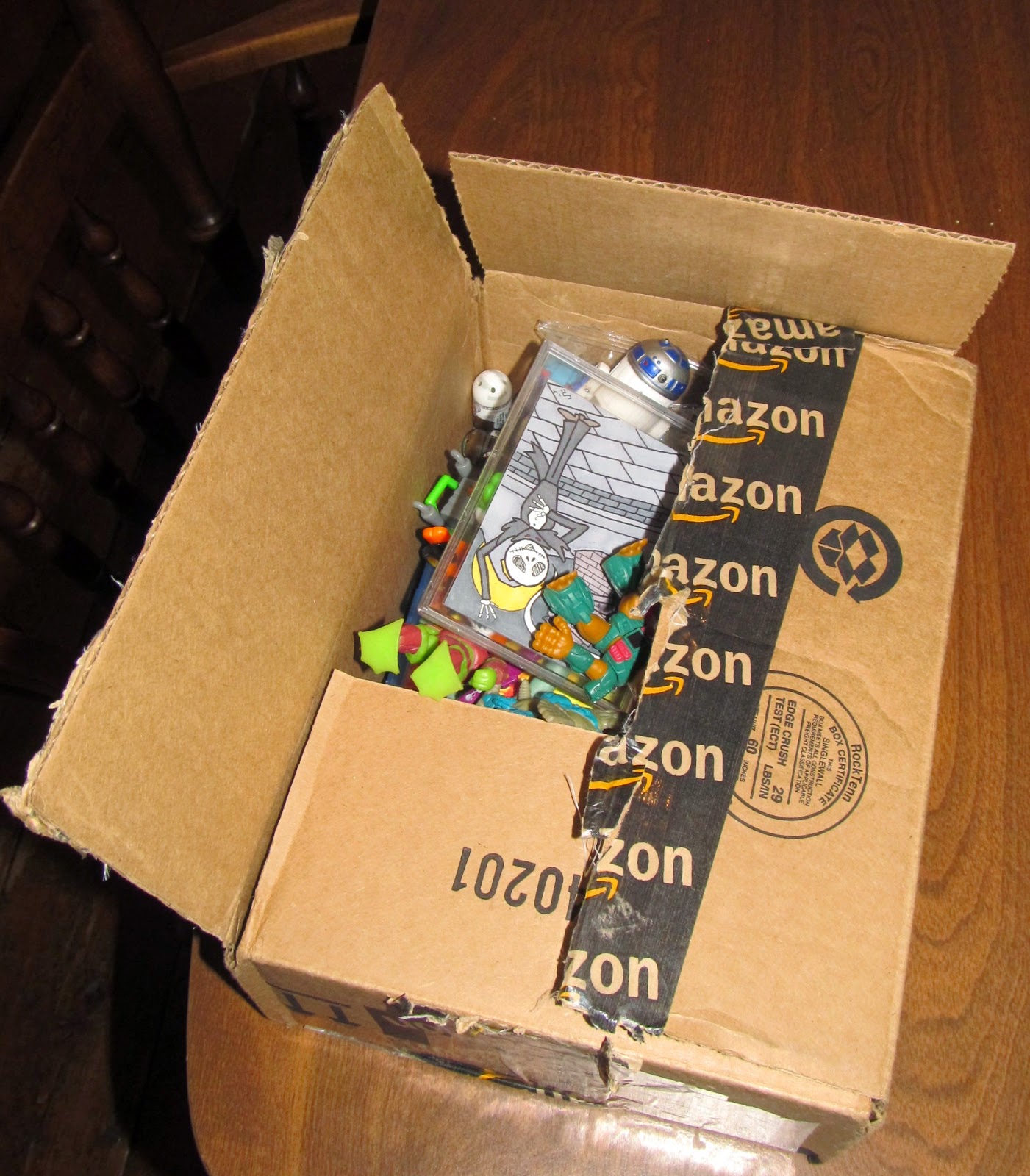 In typical fashion, Chuck sent me a whole box of goodies instead of just my prize... because that is just his way. He's generous to a fault. So let's take a look at what he sent me shall we? I'll show you the sketch card at the end (eagle-eyed readers may THINK they see the sketch card... but you would NOT be entirely correct...) and THAT will be what makes this post a part of my Halloween countdown! 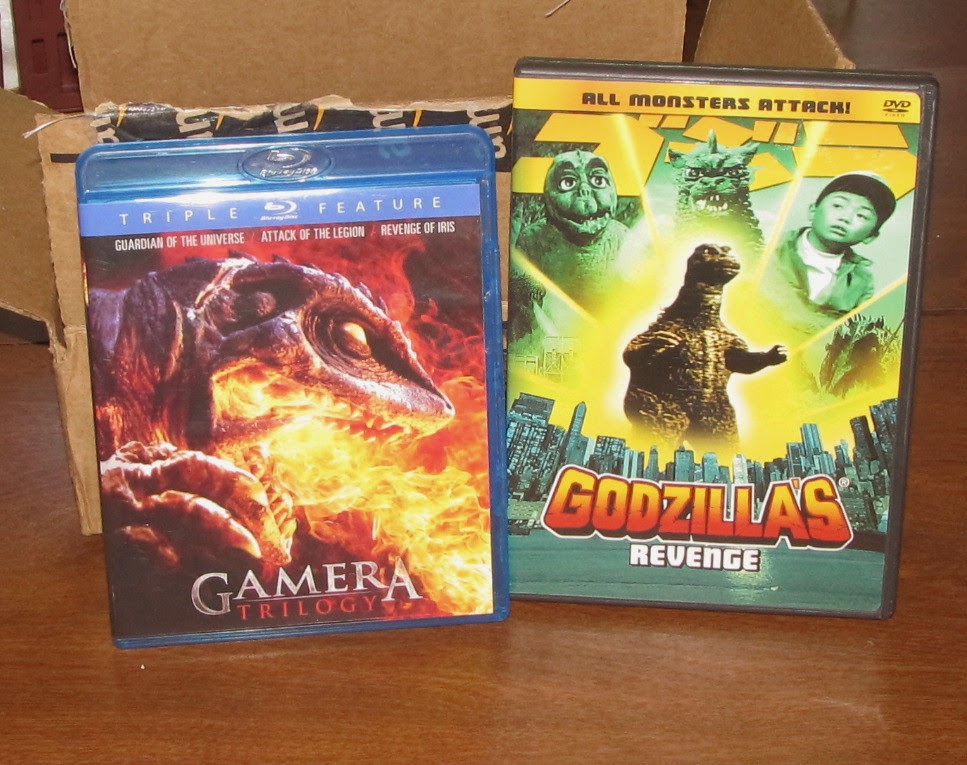 To at least start us off on a Halloween-y note, I'll show off a couple of the movies he sent me! First up, the Gamera Trilogy, which begins with "Guardian of the Universe" from 1995. I had confessed to Chuck at some point that I was interested in kaiju films and had not yet really... seen... any. So he offered to send me some because that's how he rolls. Godzilla's revenge from 1969 makes this the perfect 1-2 punch of famous giant scaly guys.

MIGHTY BEANZ! I actually ended up giving these to my two sons to play with because they love both Star Wars and Mighty Beanz. 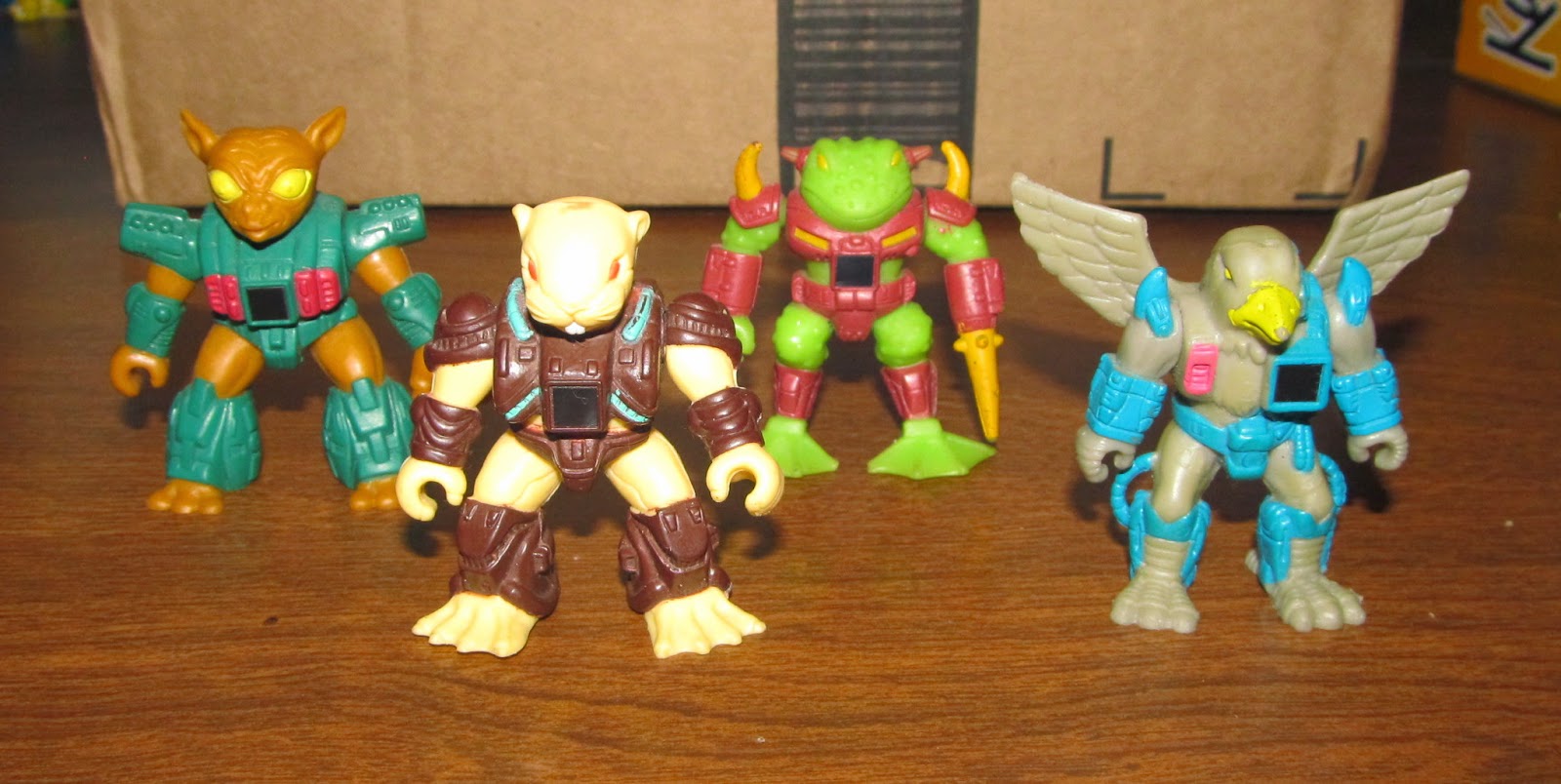 One of my FAVORITE things about this package? All the frikkin' BATTLE BEASTS!!! I had the beaver guy in the front when I was a kid, and he was actually one of my favorites!!! So glad to have another one in my collection! The others are all completely BAD-ASS as well. These are some truly cool Battle Beasts. I mean the frog? The tarsier? And ANY Battle beast with wings was automatically coveted by all when I was a kid. I like his leg hoses. Makes me think of Apocalypse. 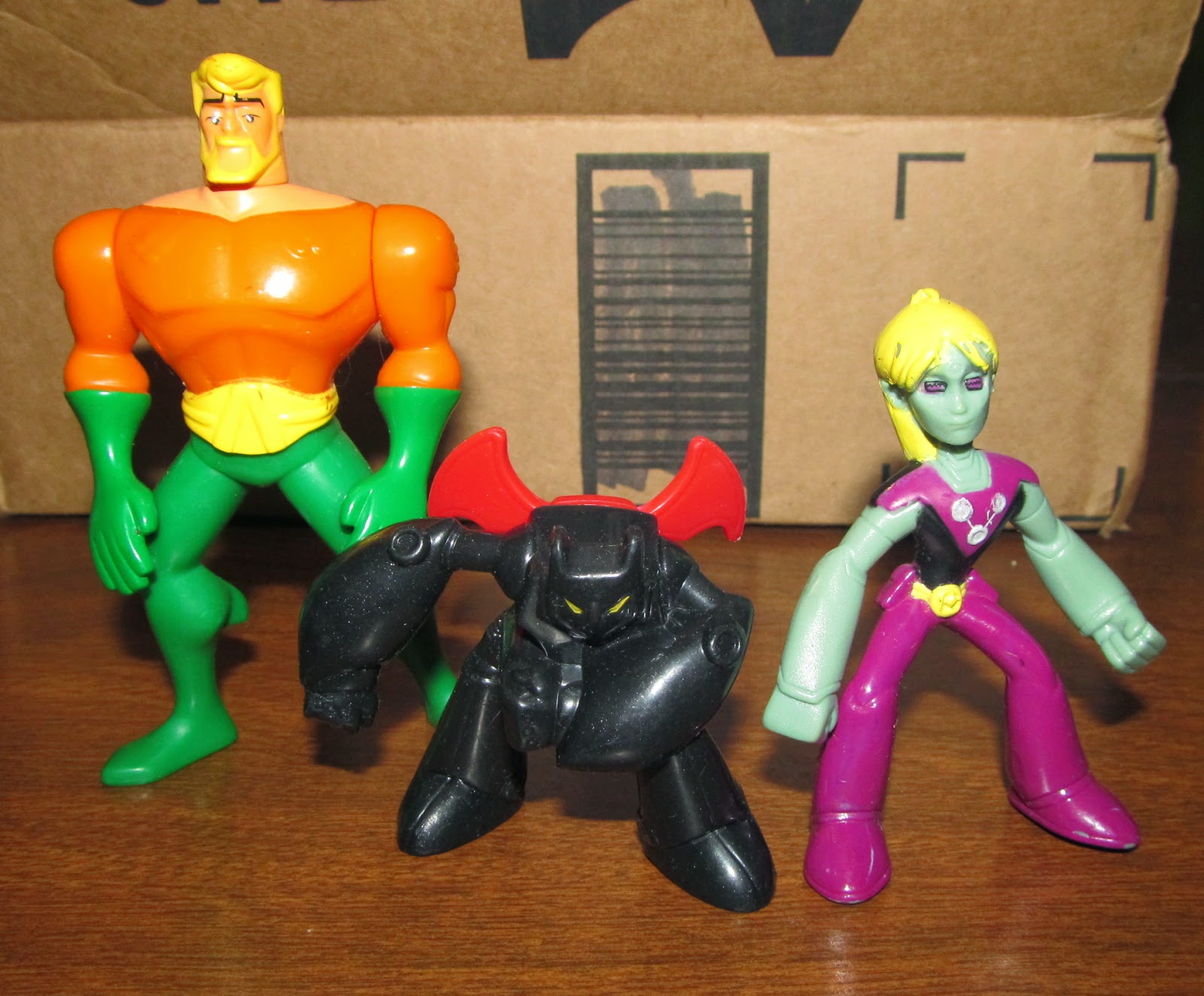 Love Batman: The Brave and the Bold so receiving two of those toys really made my day... and the Brainiac is from some version of the Legion of Superheroes, I know, but I confess I'm not sure which version. Just FYI: The bat-s**t crazy concept that the Batmobile could transform into a mecha really pleased me. THAT is what you see crouching there in the middle. THE BATMOBILE. 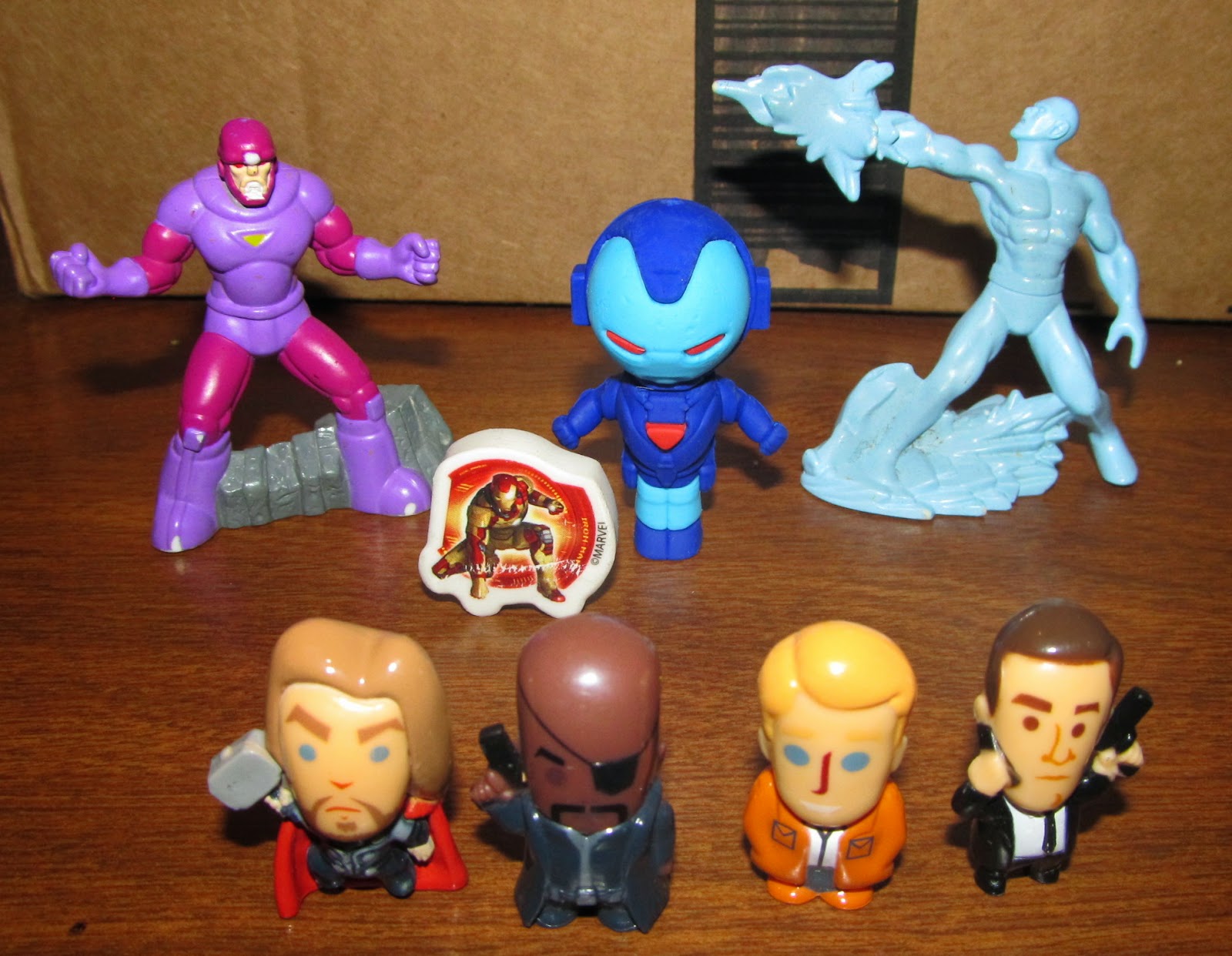 Next up Marvel! In a way, Agent Coulson is directly responsible for me winning this prize from Chuck and getting me all this cool loot. My absolute favorite pieces in this little lot are the Sentinel and Iceman. But I'm a marvel guy, so I love it all. 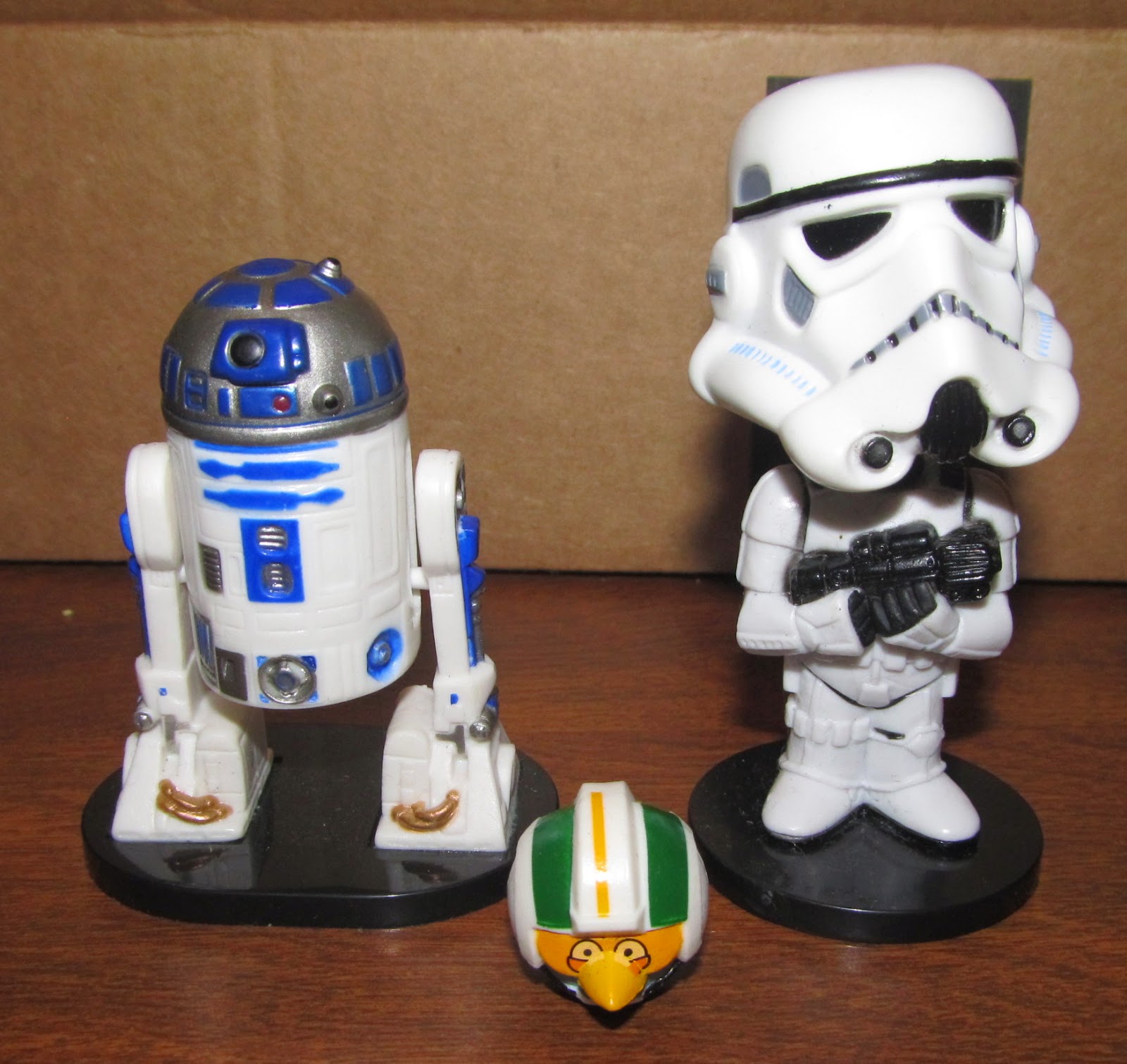 Star Wars stuff! Two bobbleheads (technically R2-D2 is a bobble-body but you get the point) and an Angry Birds Star wars X-Wing pilot! 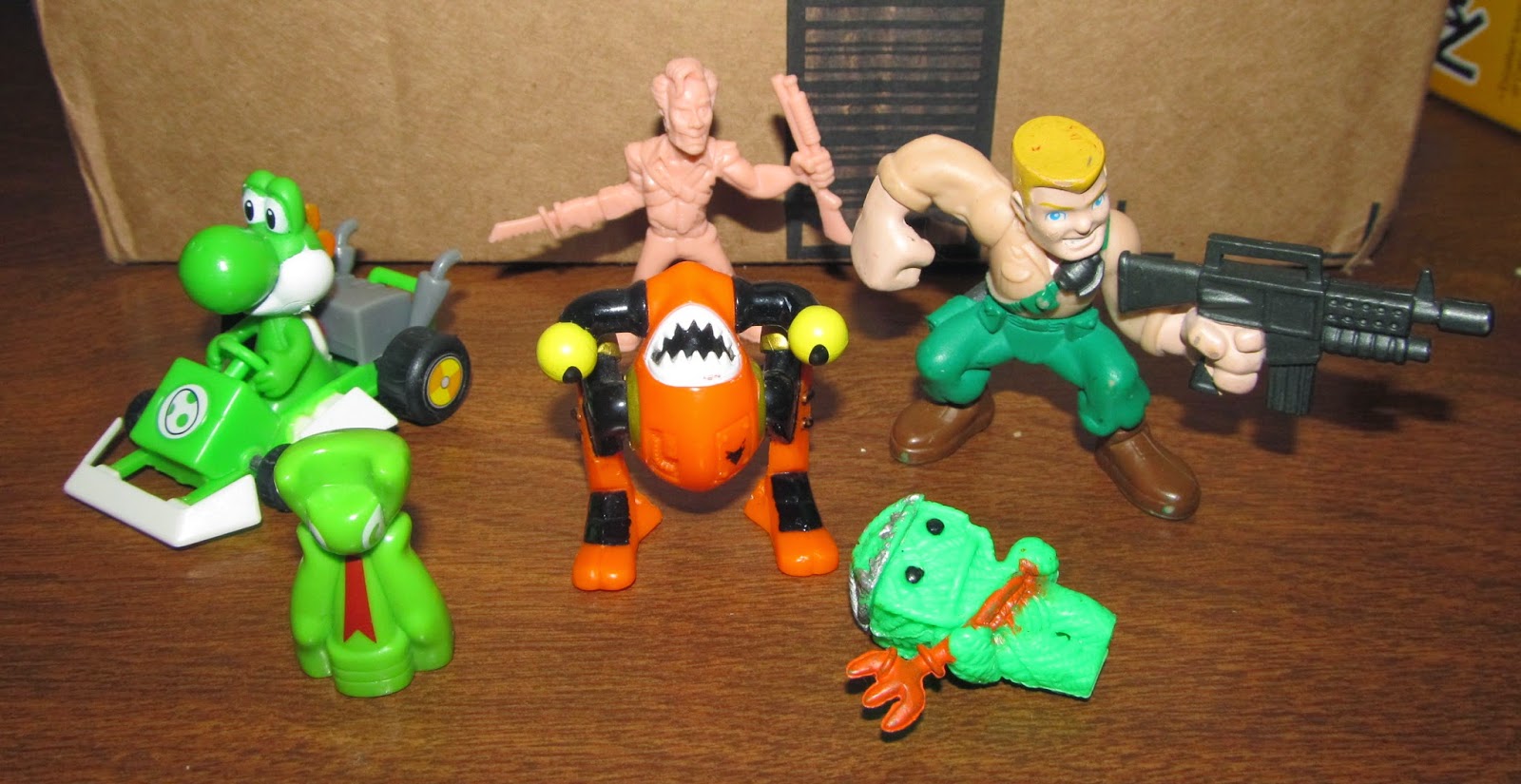 Yoshi in his Kart and the G.I. Joe Combat Heroes Duke notwithstanding, this batch of stuff seems pretty Halloween-y right? We have a Gogo's Crazy Bones minifig that looks like a cobra, a little pitchfork-wielding voodoo doll guy, and a SLUGS Zombies Sawblade Sampson figure (obviously an homage to Ash of Evil Dead). That beautiful ZBot in the center? The one who looks like a Jack-o'-Lantern carbed by H.R. Geiger? His name is "Jawbreaker" and he's from the Burger King set of 5 (of which I now only need 2 more to complete the set!!!)

AND NOW LADIES AND GENTLEMEN... The moment you've all been waiting for! The sketch card that Chuck Pechonick sent me!!! Take a gander: 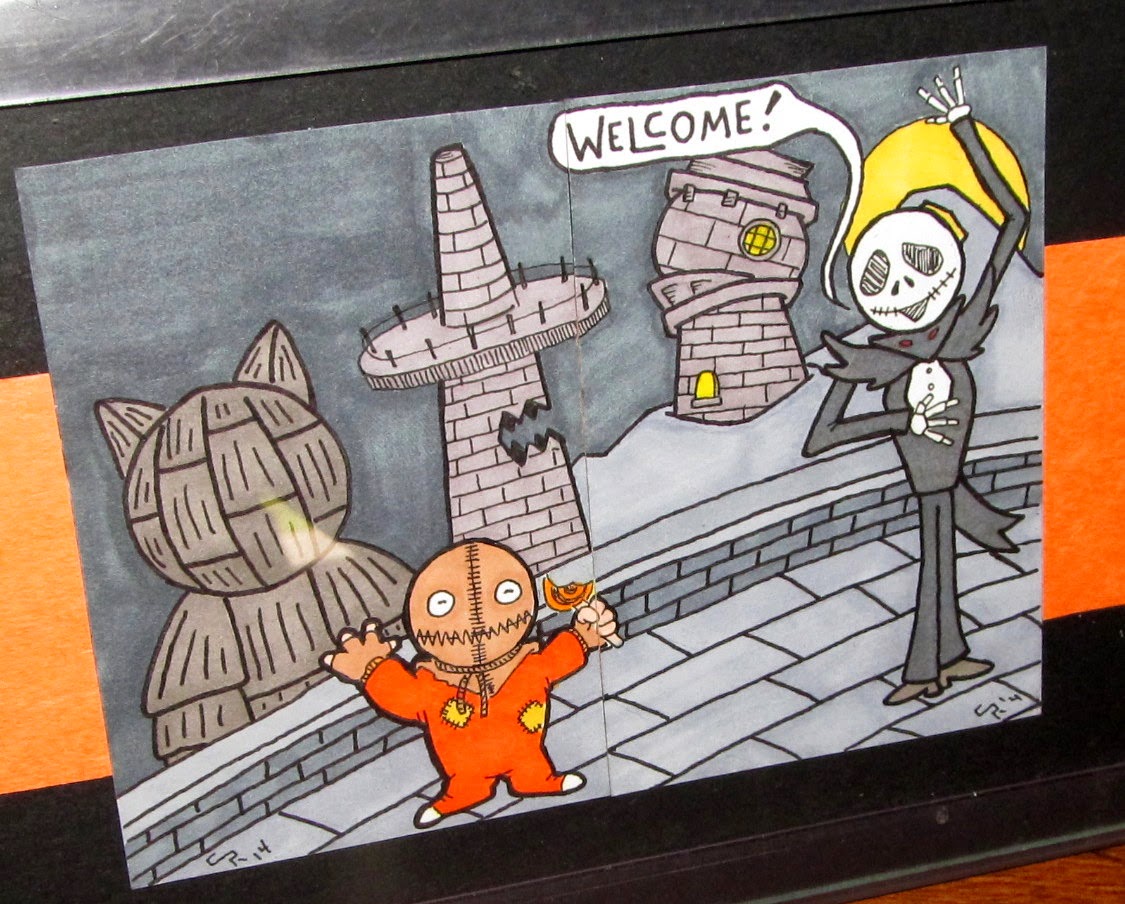 When I made my request of Chuck, I asked if he could do two characters on the same card. I wanted a nice picture of Sam from Trick R' Treat and Jack from the Nightmare Before Christmas interacting in some way. And this was his solution: To heck with it, he'd just do two cards!!! Look at this thing! I love the idea that Sam is visiting Halloweentown and Jack is welcoming him in! I've decided I want to start collecting art from anyone who's interested in doing a similar piece (Sam and Jack together) because before I started requesting this idea (I have approached a couple of other artists as well) I found a disturbing LACK of art featuring these two characters together online. Doesn't it just seem like sort of a no-brainer? Anyway, if I get enough of these collected by next Halloween, I'm going to feature them all October long. I'd love to see these two balancing on a log Calvin & Hobbes-style, or sitting in a diner Norman Rockwell-style. Sam sitting on Jack's shoulders to watch a parade... or menacing terrified children on Christmas Eve! 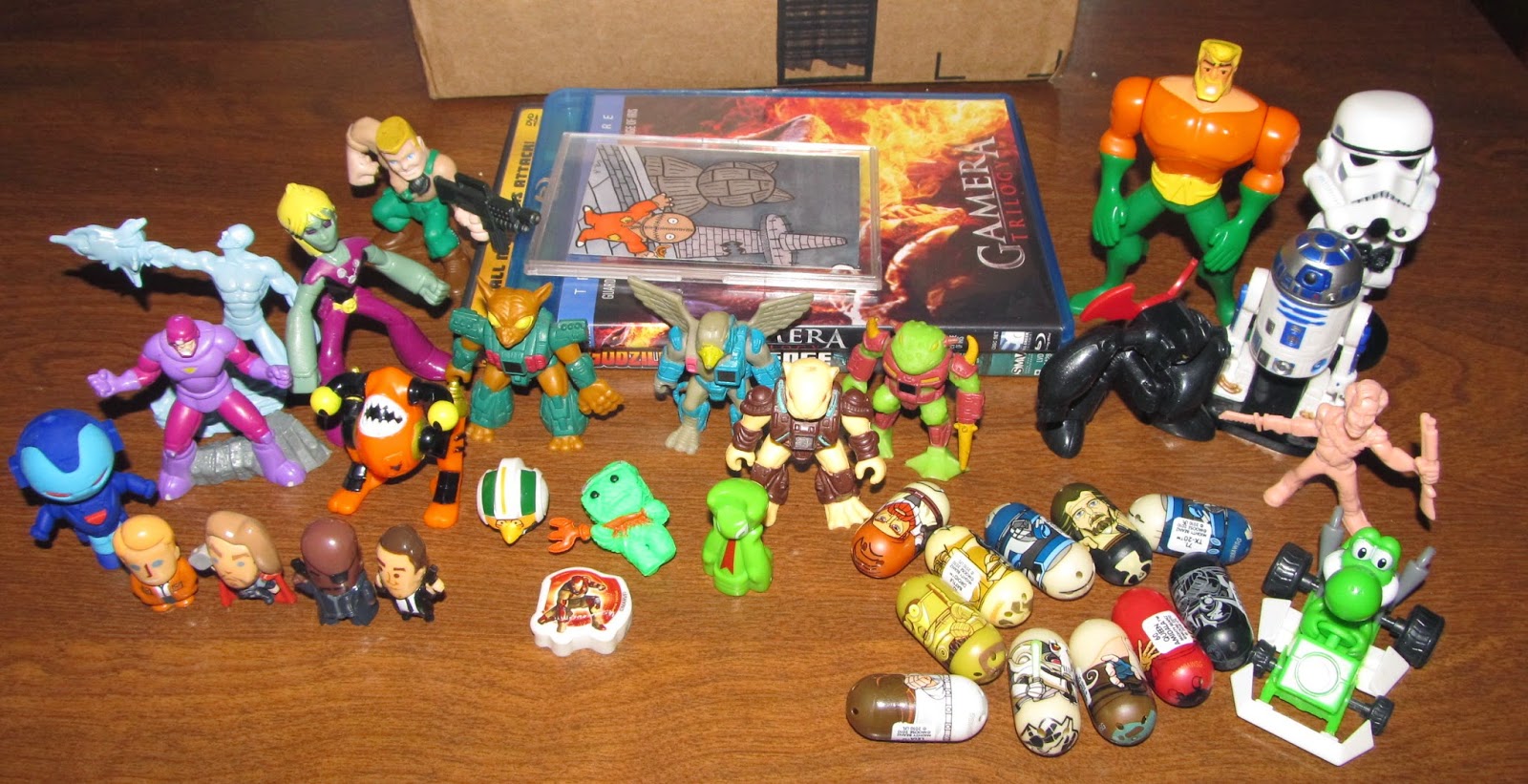 So there you have it folks! An incredibly generous package from an incredibly generous guy! Thanks to Charles Pechonick and be sure to check him out on Instagram  and Twitter and check out his site over at Geekshowink.com to see his blog, his art, and other cool stuff!

I'll be back soon with more Graverobbing Goodwill Goodies, so until then, Happy Haunting!
Posted by Derek Ash at 10:49 AM