Halloween Countdown Day 2: A Trip to the Hands of Hope Thrift Shop

So a month or so back I went into a thrift store in Bangor, ME that I've only gone inside once or twice in the past, because it's one of those places that makes my skin crawl as soon as I go in. It smells awful and you feel dirty just walking inside. I wanted to see what was in there though, because I was doing a BIG THRIFT day and I was hitting ALL the places. The store in question? The "Hands of Hope Thrift Store" I wasn't expecting to find much...

But honestly, I was shocked at what I did end up finding. 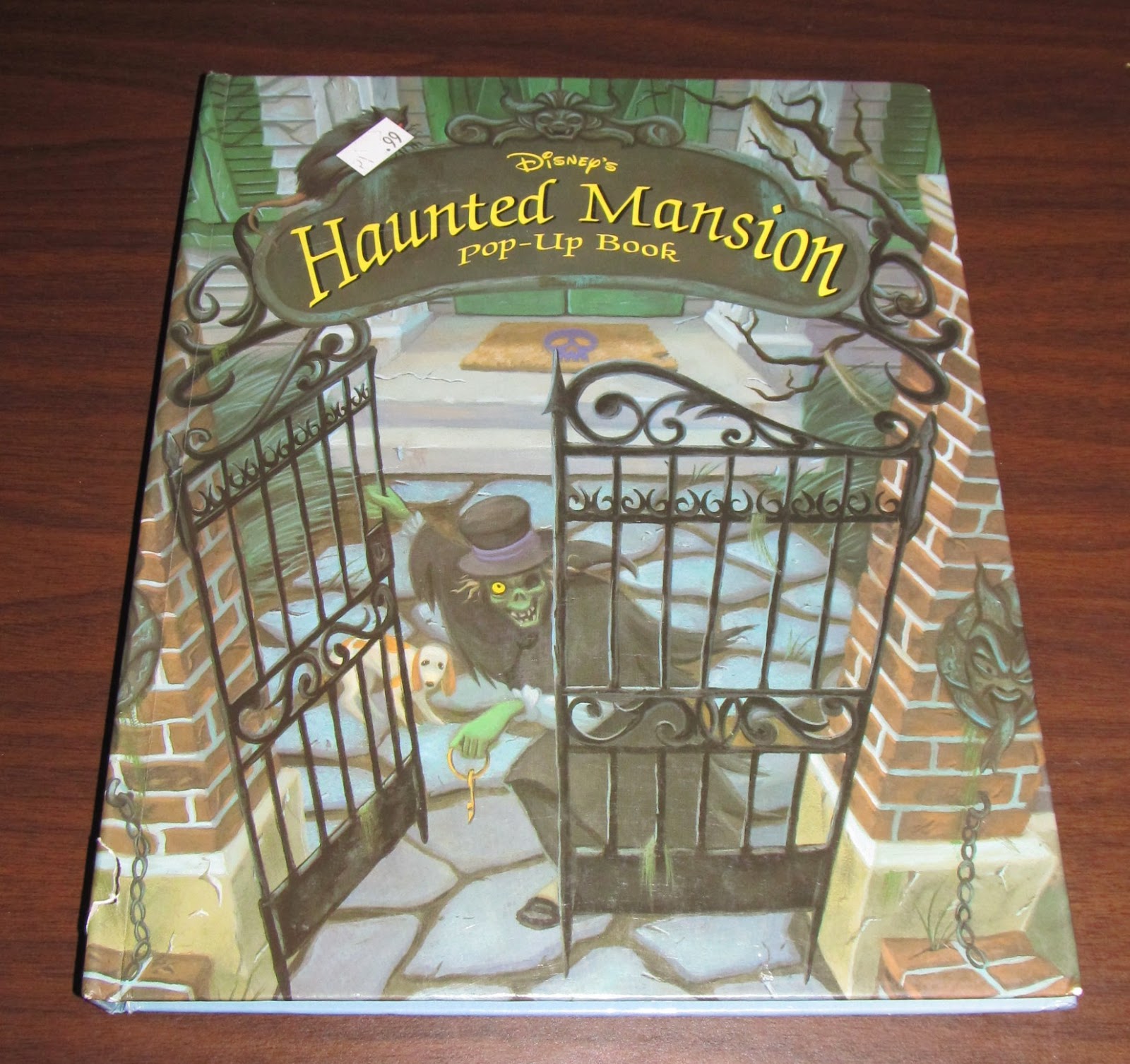 First up was this awesome Disney's Haunted Mansion pop-up book! I fully expected this thing to be WRECKED as most pop-up books I find secondhand are. To my surprise and delight it was in great shape! I have never been on the Haunted Mansion ride as I have never visited a Disney theme park in my life. But the idea is just so cool... it's on my bucket list. For now though, I will have to content myself with this thing. There are only a few pages, so I went ahead and photographed the whole thing for your enjoyment. 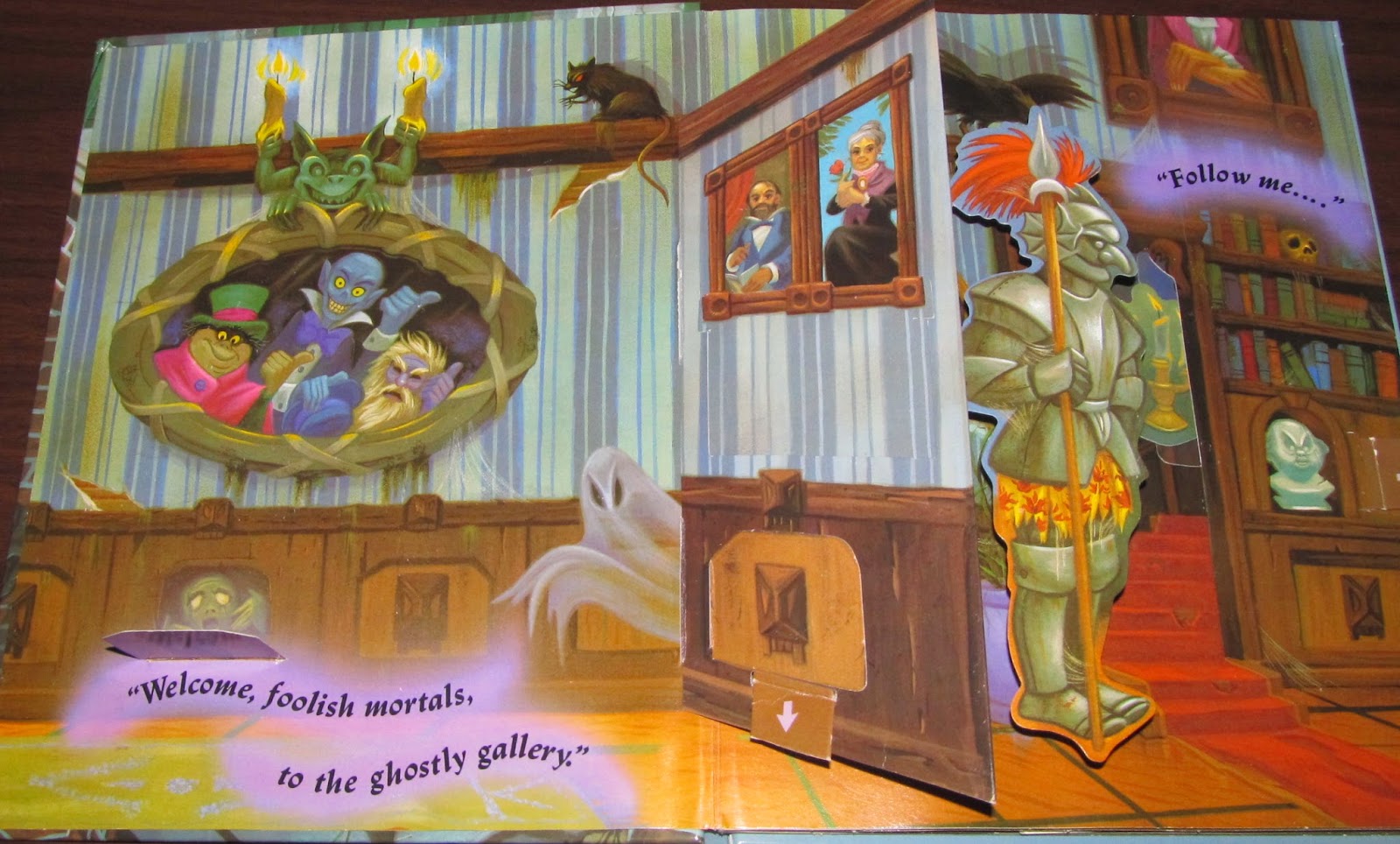 It is a little difficult to convey the complete sense of "pop-up" in these photographs, but trust me, these things jump right at you. The one major damaged bit of the book is the turn-wheel that makes Madame Leota (A hologram! the back cover proudly exclaims!) fly around. IT still sort of works... but it gets lost and starts drifting off the page and out of the book, and then out the door to steal your car. Most of the pull tabs on the pages transform portraits from normal looking folks into zombified ghouls and ghastly fiends. 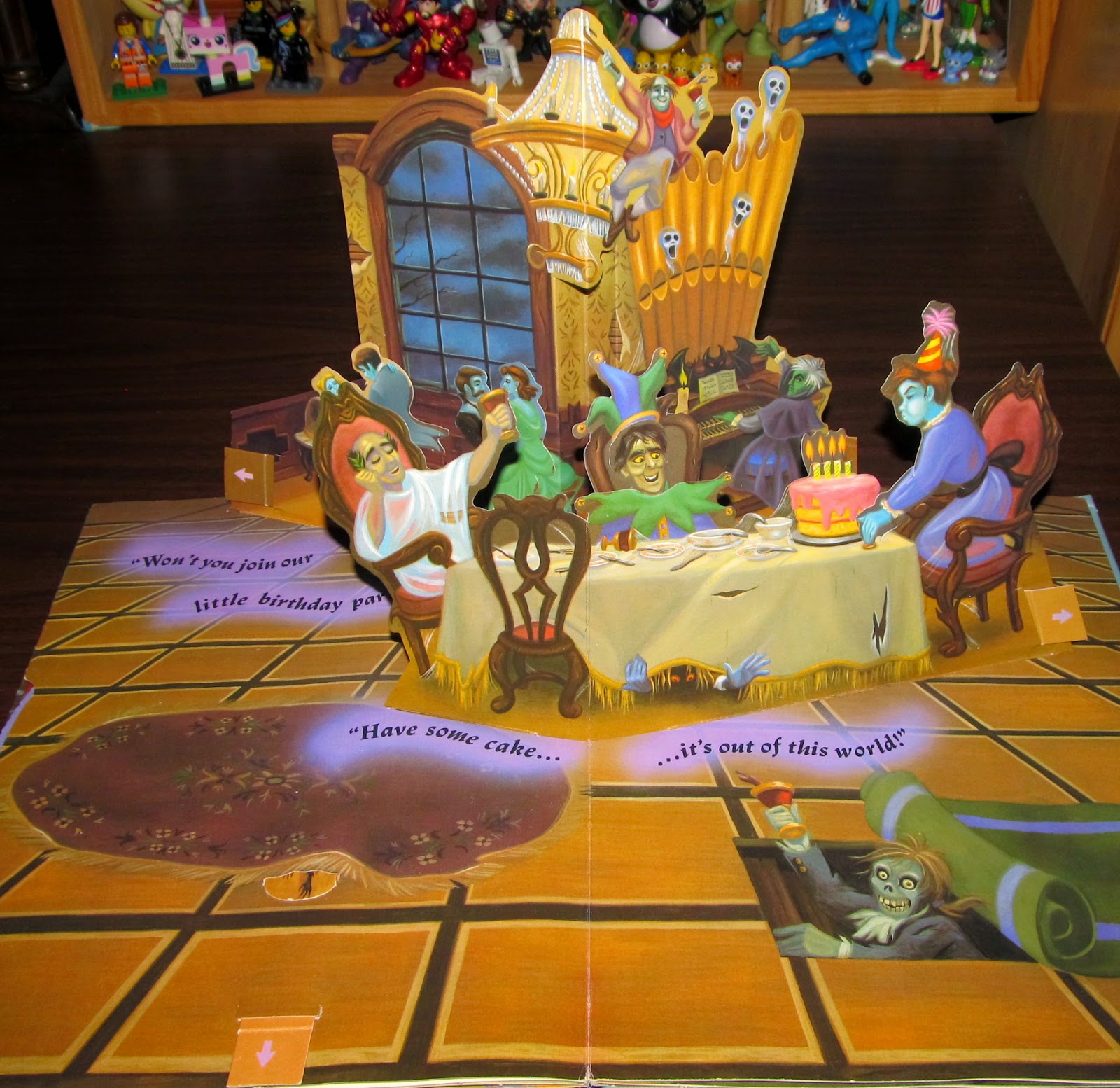 The dining hall flies tall and proud from the book in an impressive display. The pull tabs on this page cause revelers to dance a ghostly waltz, creep out from under rugs, and blow out candles on cakes (and heads from Jesters) 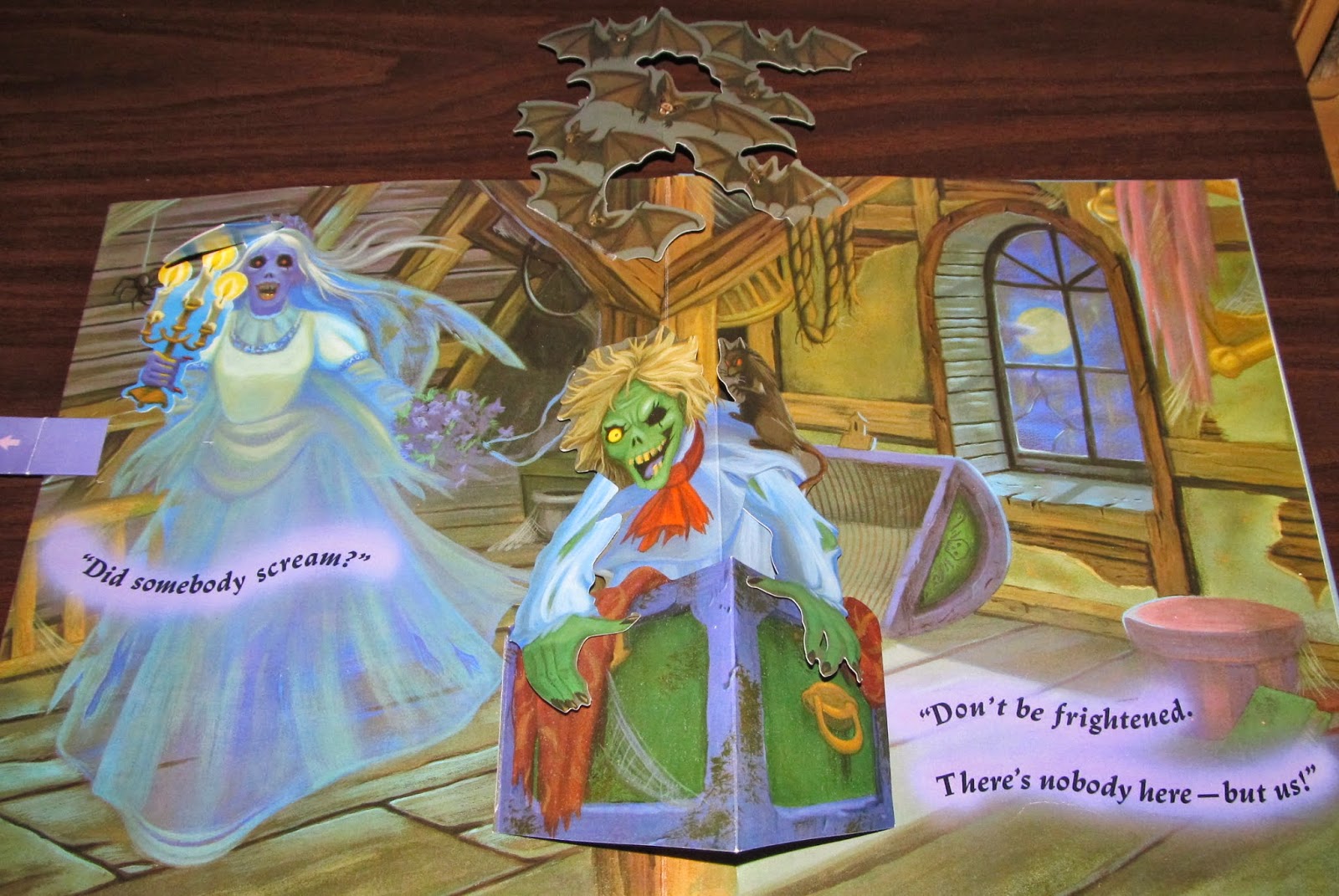 Arguably the most genuinely terrifying image in the book is the Bride in the attic, accompanied by this fellow in his trunk. 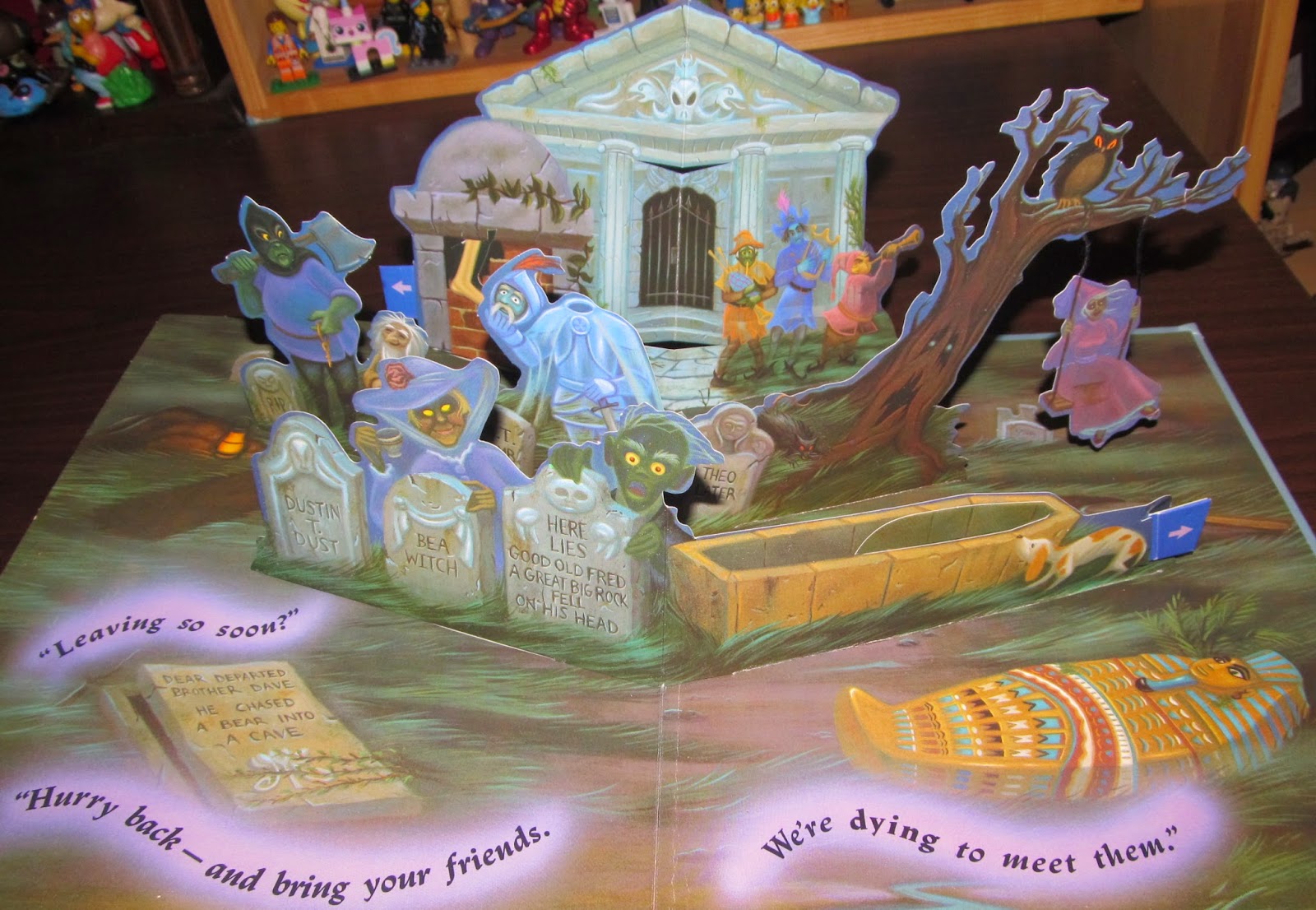 Overall this is an awesome, Halloween-y good time, with all kinds of thrills and surprises. 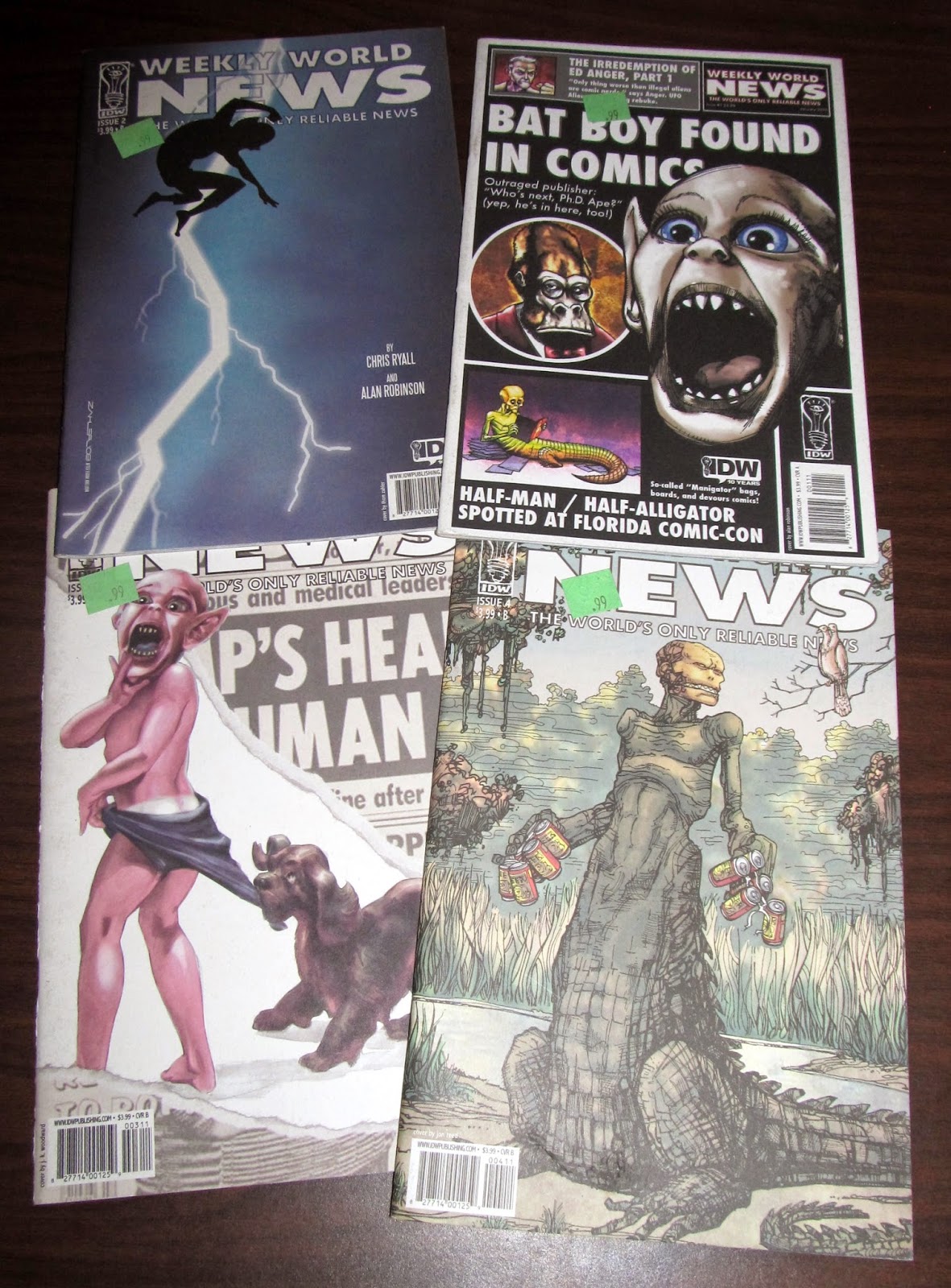 Next up I foudn the entire 4 issues of IDW's Weekly World News Comic book. I LOVE WWN crap. I didn't even KNOW there was a comic series based on the characters introduced in the now defunct "news" paper that saw the birth of Bat Boy. The writing is pretty terrible, focusing on a crotchety old man who I think was a featured skeptic in the paper itself. But those covers! It was worth it just for those alone. 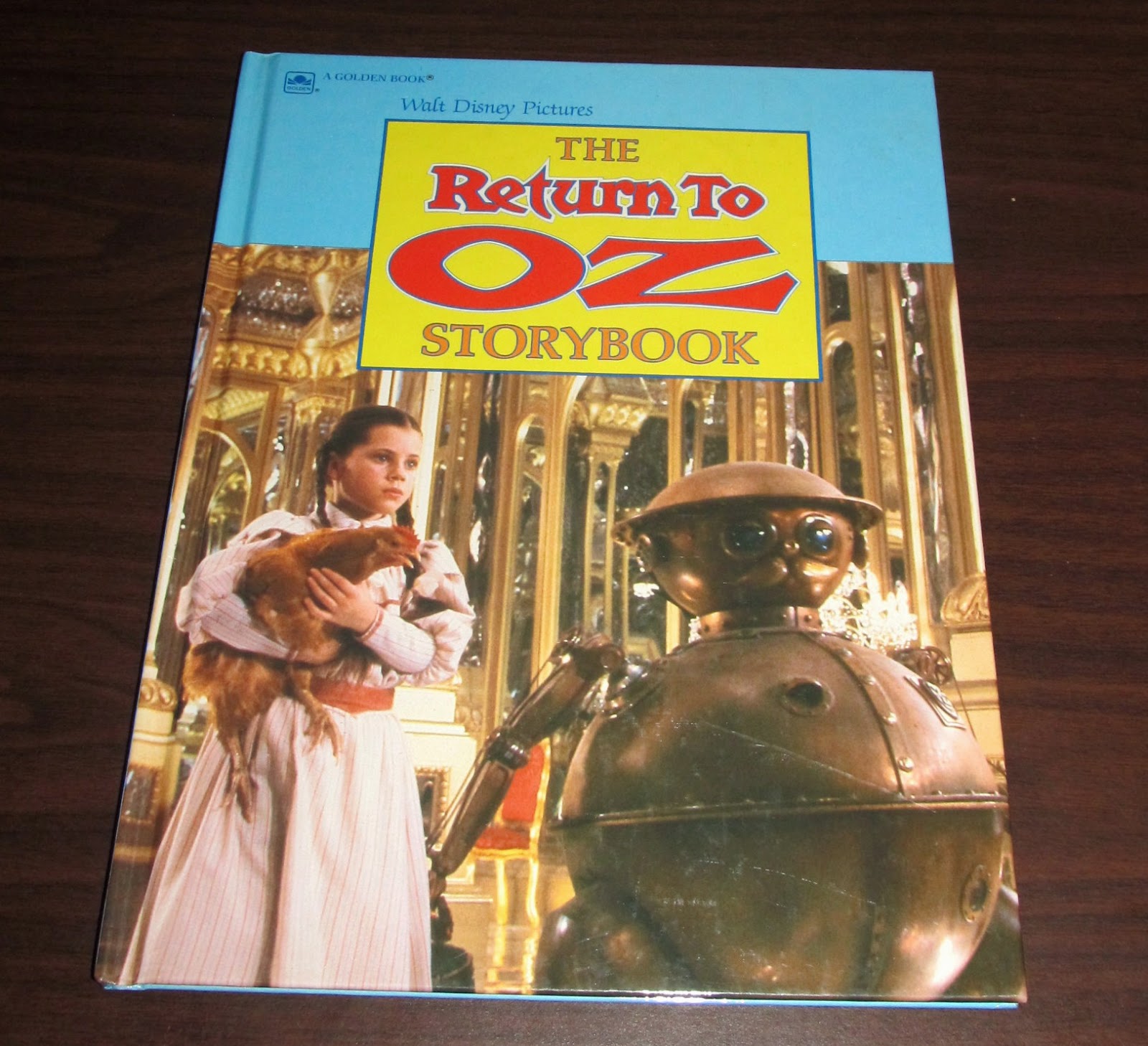 Next up was THIS beauty! I have a lot of affection for the Return to Oz movie of 1985. A lot of people hate it, but I love it for its sheer insanity. The Wizard of Oz universe has never been a sacred cow to me, so reimagining it in various ways only makes it that much more interesting to me. 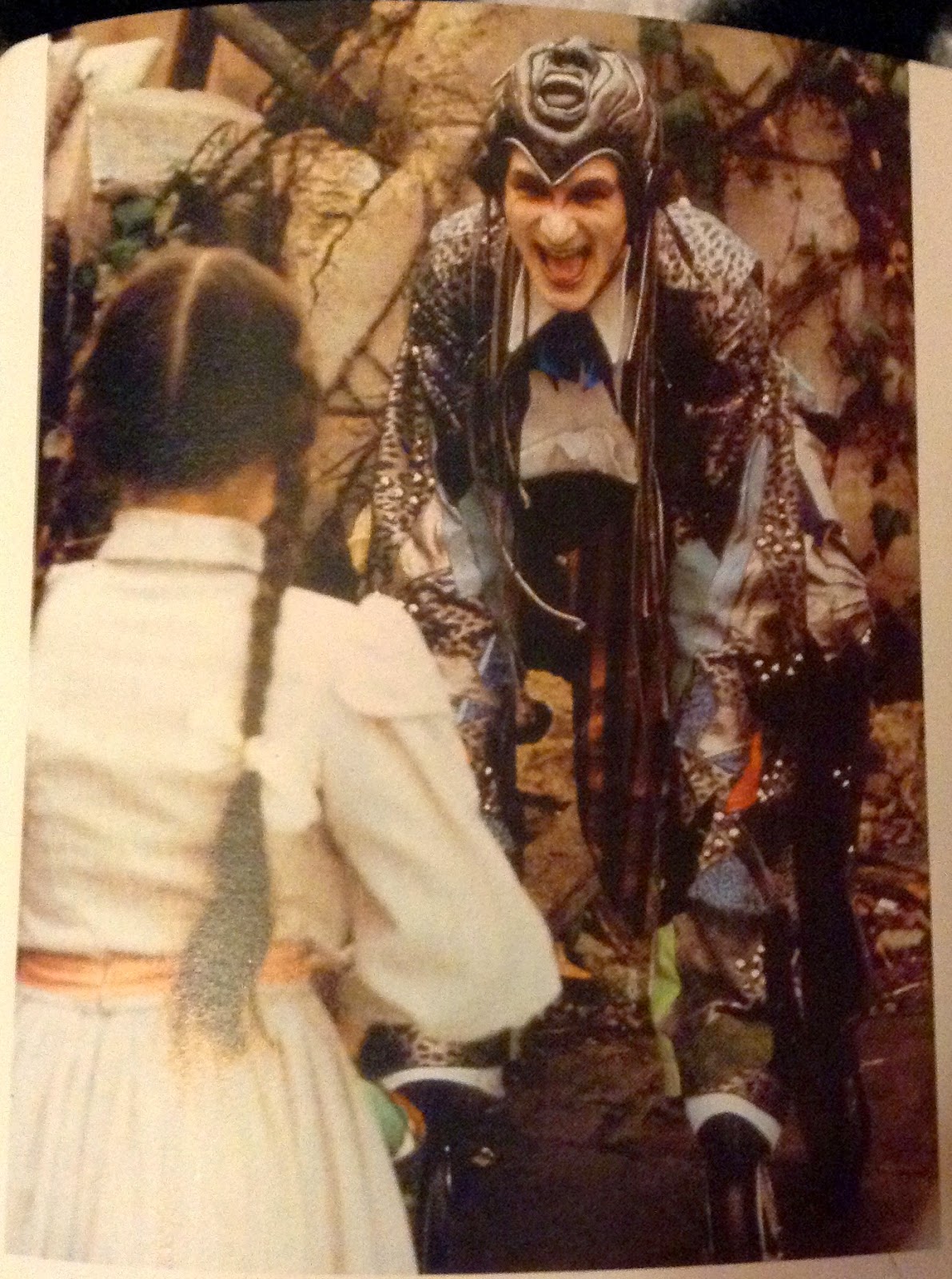 Not Halloween-y enough? Remember these guys? The Wheelers were pants-soilingly terrifying to me as a kid. 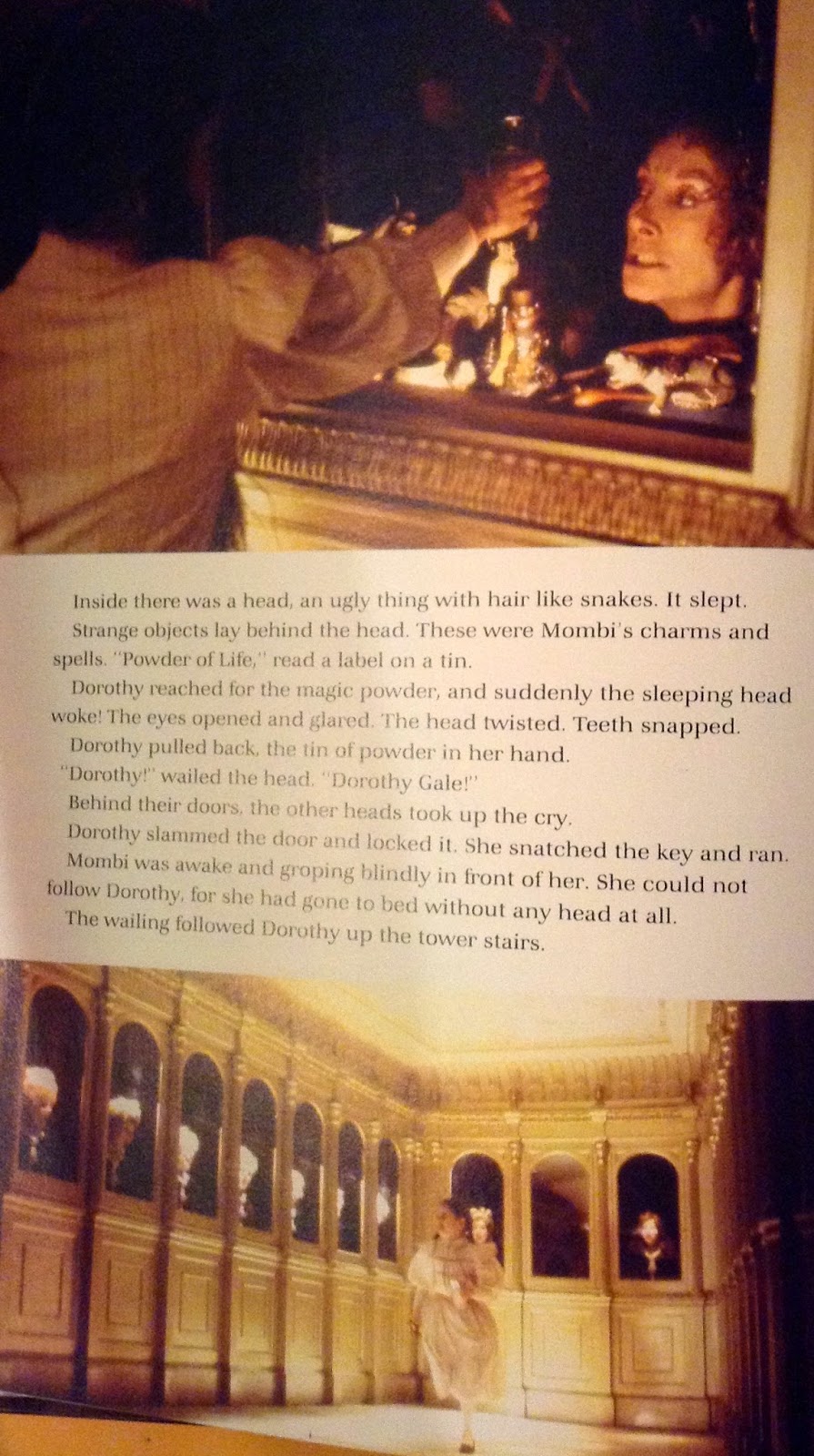 And Mombi was absolute nightmare fuel. Between her headless body and gallery of switchable heads this chick was just off the hook. I kind of want to recreate this as a Halloween Haunt some year. Like... the whole terrifying movie actually. From the electro-shock therapy to the deadly desert to the gnome king. 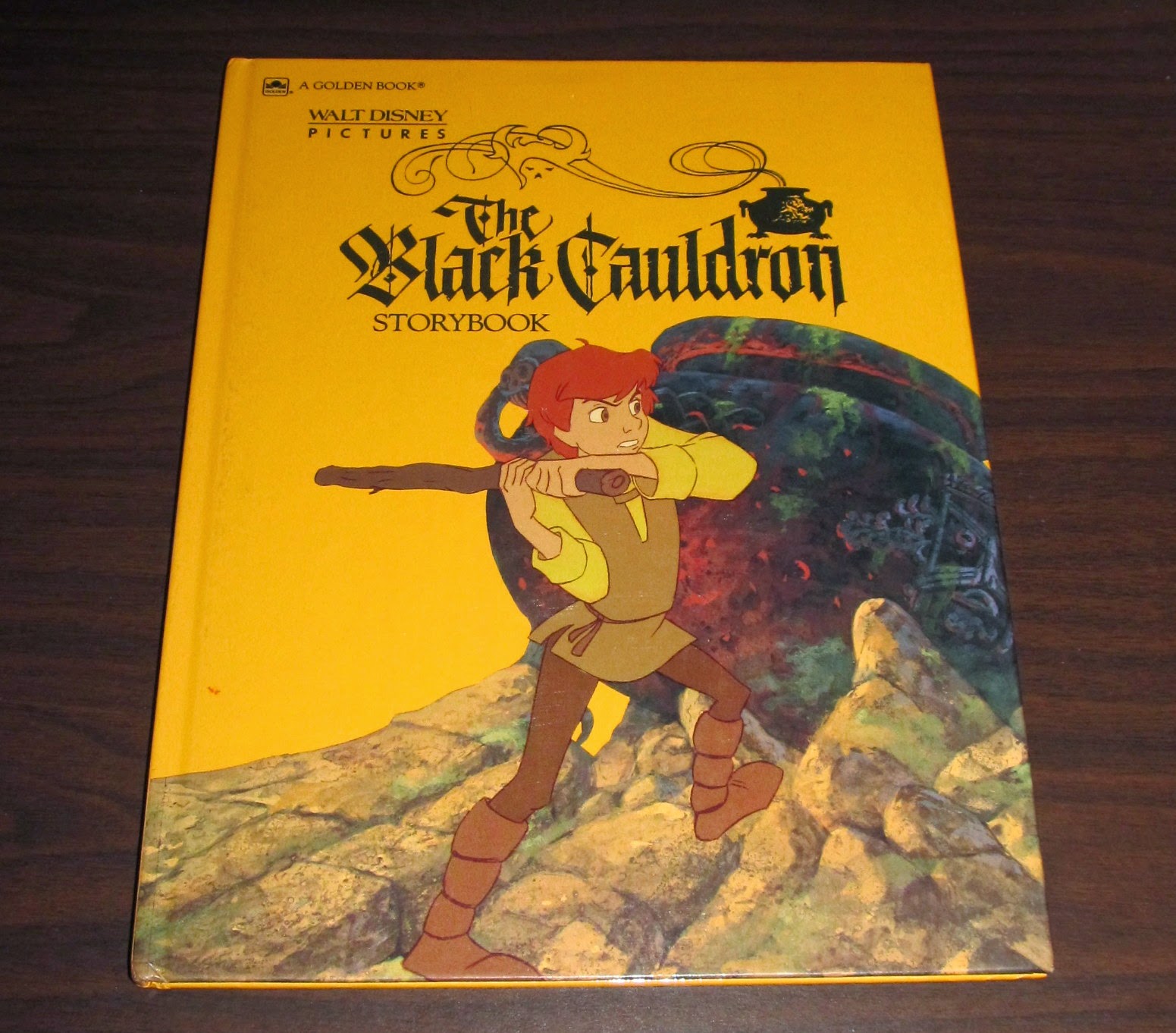 I am not a huge fan of the Black Cauldron Disney film. I love the books by Lloyd Alexander way too much for that. I seriously think of the Prydain Chronicles as being on the same level at the Narnia books, the Wrinkle In Time Series, and the Lord of the Rings as far as epic fantasy series  go. The Disney movie sort of misses that point on several levels and cheapens the whole affair. But there is a part of me that holds this book in a certain place in my heart. Mainly for being a Disney movie that has the likes of this guy in it: 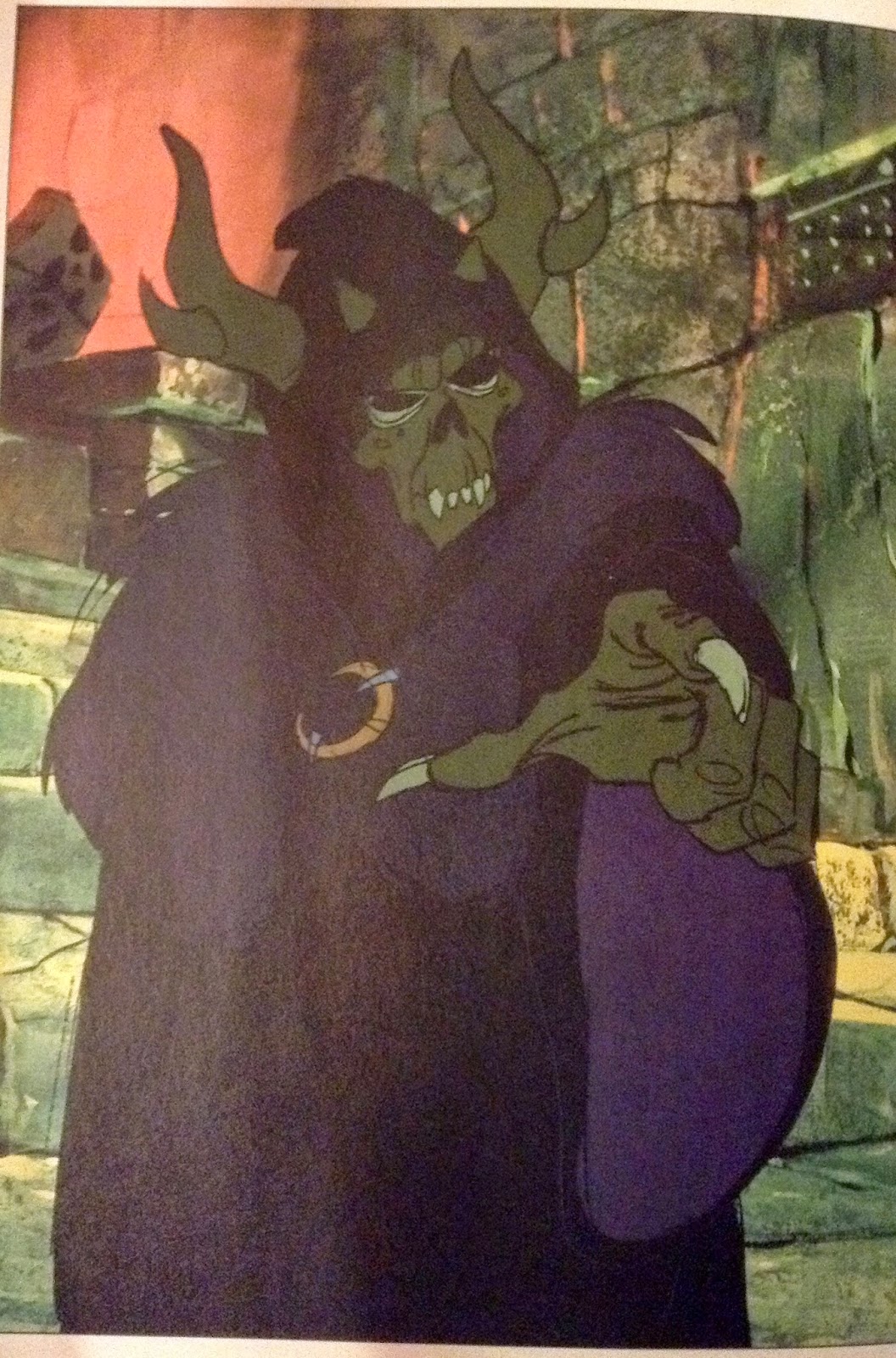 The Horned King! He's a poor man's Sauron, sure, and honestly, Lloyd Alexander cribbed this sort of villain and more from the Lord of the Rings... but I don't notice it whilst reading the books. There were alos a whole host of these guys: 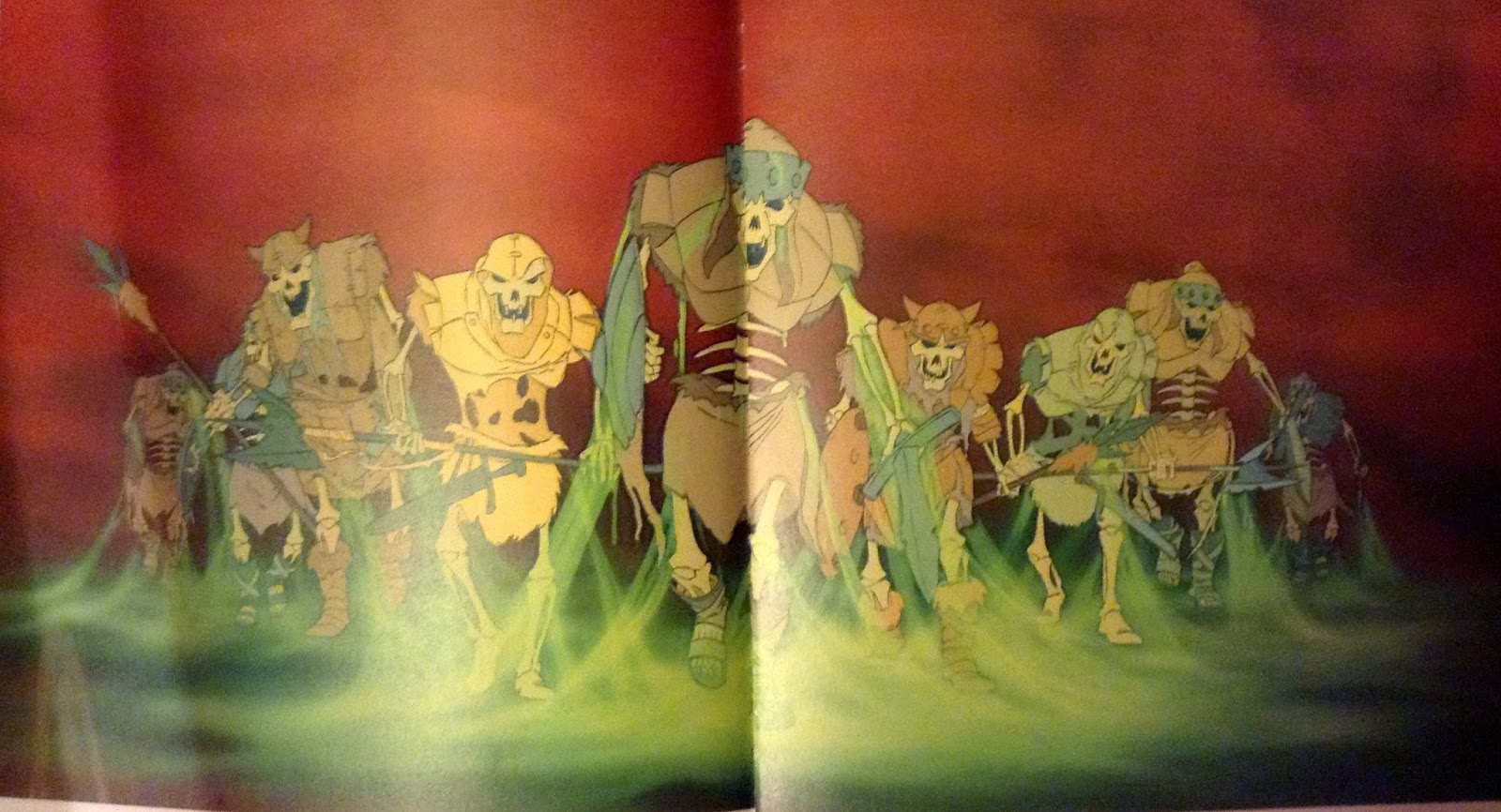 Gah! An army of the undead! 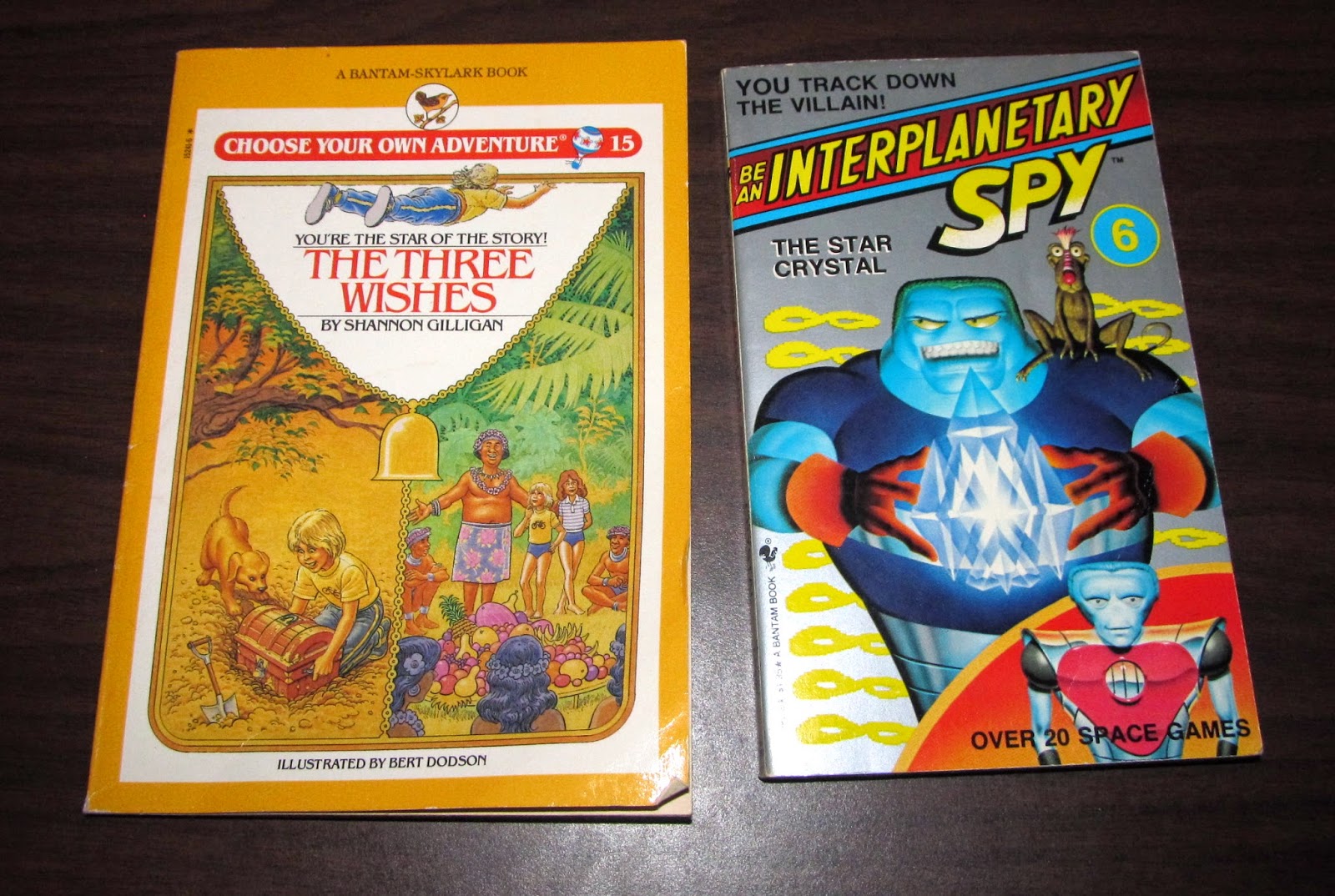 From this point on I have a hard time justifying any kind of link between my purchases and Halloween. I suppose these books could be considered... nah. They're sci-fi and fantasy at best. One of them, The Three Wishes, is a young-reader CYOA book, and the other, Be An Interplanetary Spy: The Star Crystal, is from a series published by the same company where instead of choosing options in the book, you have to solve various puzzles to get to the end, and solving them wrong means death. I read through the Star Crystal as soon as I got it home, and while it wasn't AMAZING, it was pretty fun. 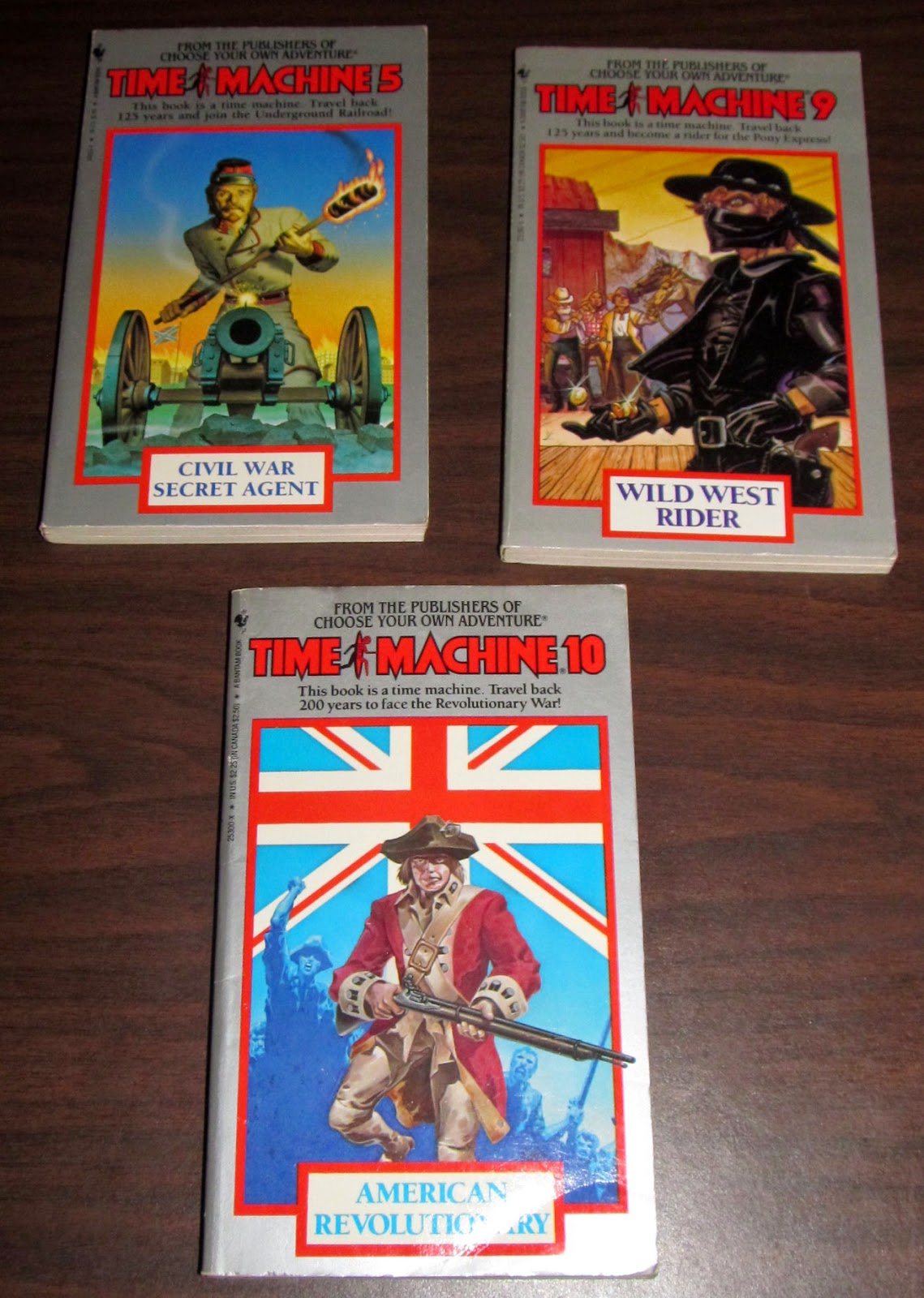 Yet another series put out by the same company as Choose Your Own Adventure, The Time Machine series is pretty much just another series of CYOA books with a historical, time-travelling theme. The three I found were Wild West Rider, Civil War Secret Agent, and American Revolutionary. I didn't even know these books existed before I found them at Hands of Hope!

This whole pile of books only cost me 7 dollars even though it should have cost me 12. I can't remember what the deal was they had going, but it involved free books included in your purchase, so somehow that knocked my cost almost in half. I did NOT complain. I am glad I gave Hands of Hope another chance, even though it still smelled pretty awful and the toys all gave me the extreme willies. It was sort of like going through a Thrift-store themed Haunted House all in and of itself... so I'll probably wait a while to go again.

That's all I have for tonight kiddos! Be sure to click on the Cryptkeeper Badge (The Creature from the Black Lagoon) in the sidebar to check out all the other participants in this year's Countdown to Halloween! I won't be doing full posts every night like this, but I will be featuring some fantastic Halloween Kids' books that I've found at Goodwill between the meatier posts. I'll be back soon with more Gruesome Goodwill Goodies! Until then, Happy Haunting!
Posted by Derek Ash at 4:46 PM