So yet another trip out to the Bangor Goodwill turned up yet more fun and funky Halloween items! (We've been out to Bangor a LOT in the past few weeks because my wife has been doing some Color Runs out there and some other stuff). So let us see what the latest trip out to one of my favorite Goodwills turned up! 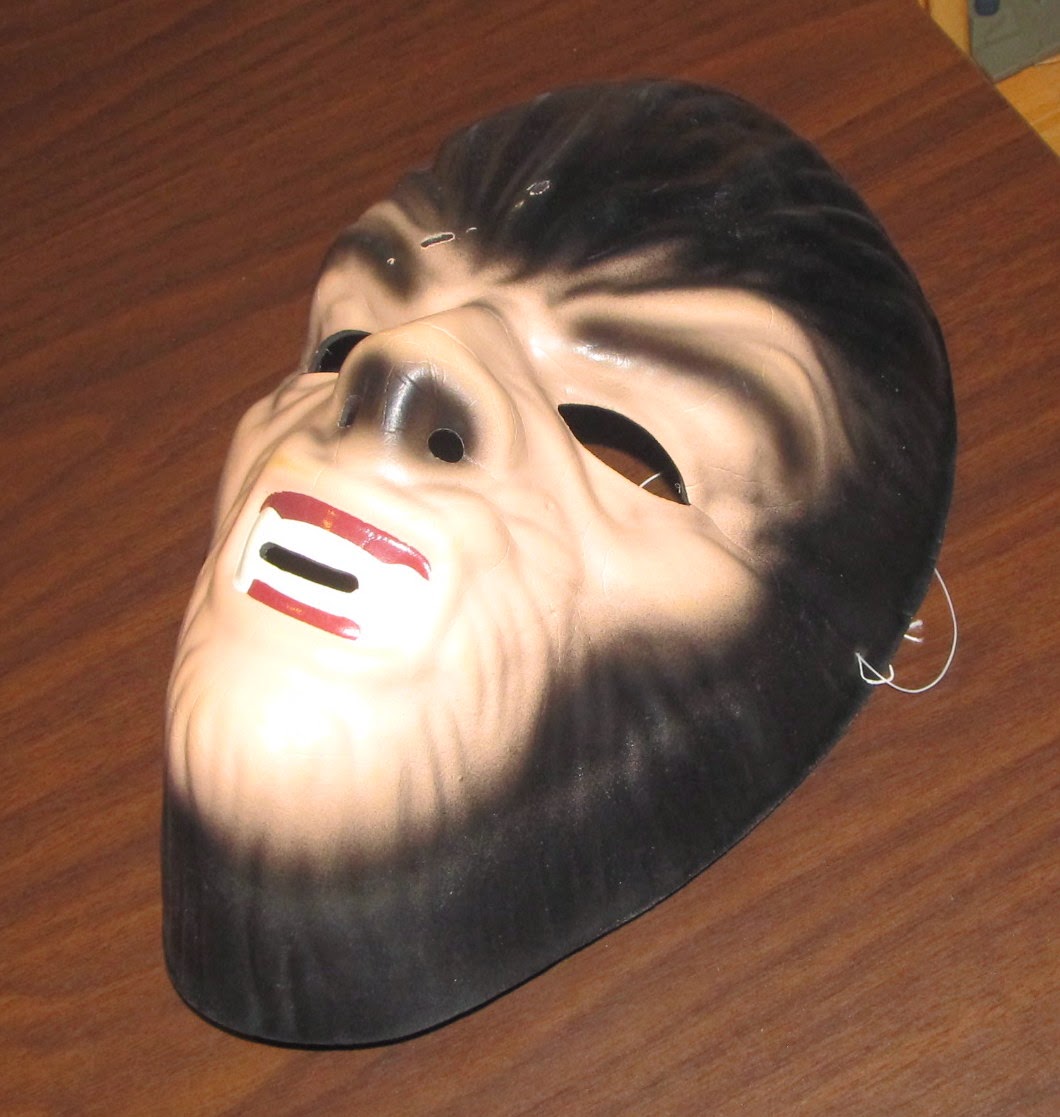 First up, I found this wolfman mask that I found to be extremely charming. Its made of some sort of rubbery, cheap foam that really wants to curl n on itself, which made getting a good photograph of the thing difficult. I love this thing though. The color shading, the snout and fangs and ruby red lips... it looks a little more Michael J. Fox's Teen-Wolf than Lon Chaney Jr.'s Wolfman... but that is neither here nor there. As you can see there is a little bit of damage on it, but I don't feel this takes away from the sincerity. 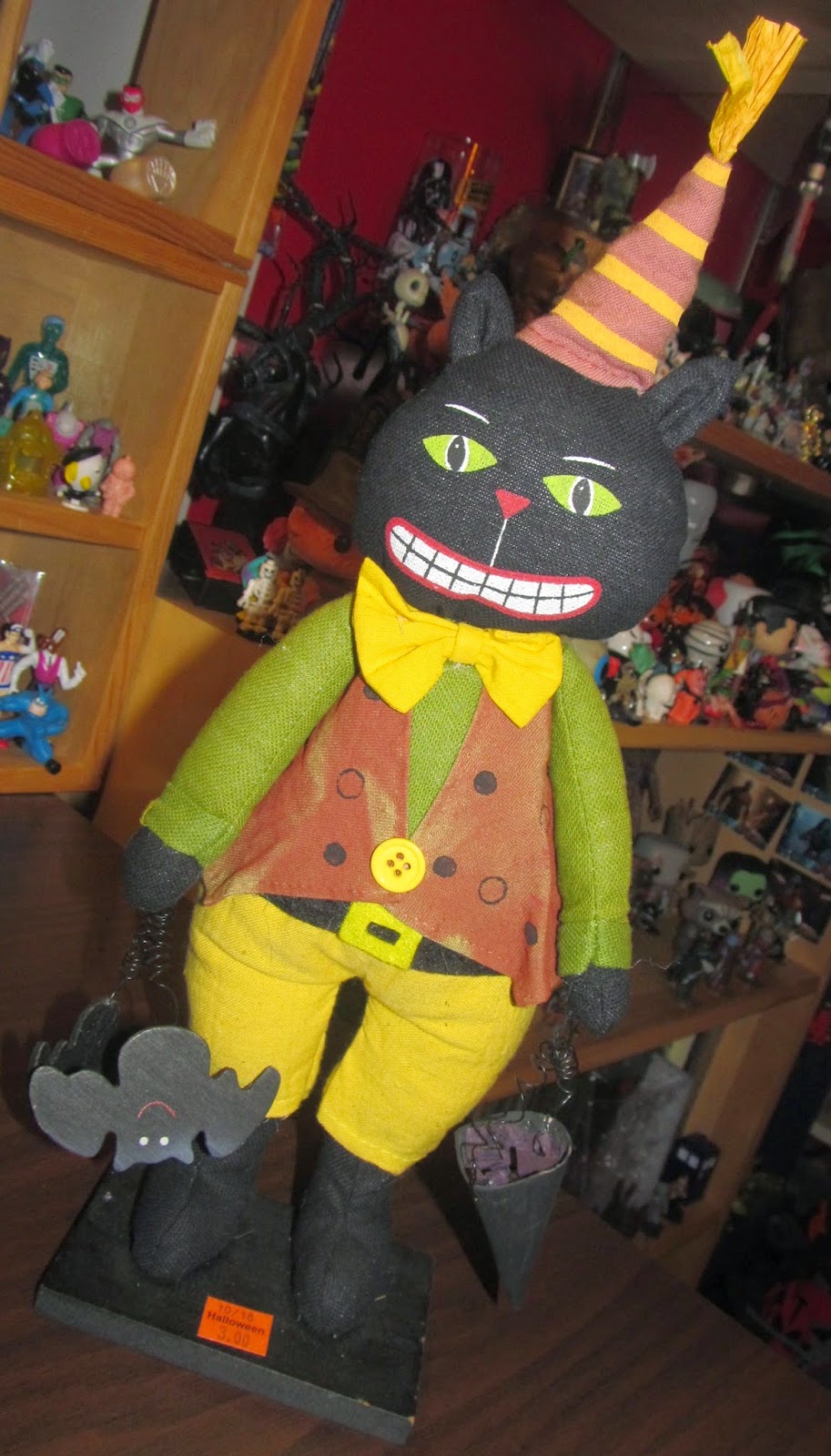 Next up we have this Halloween kitty figure that I bought mainly because I thought my wife would like it, but also because I love Halloween black cat stuff. And this guy is pretty fun. 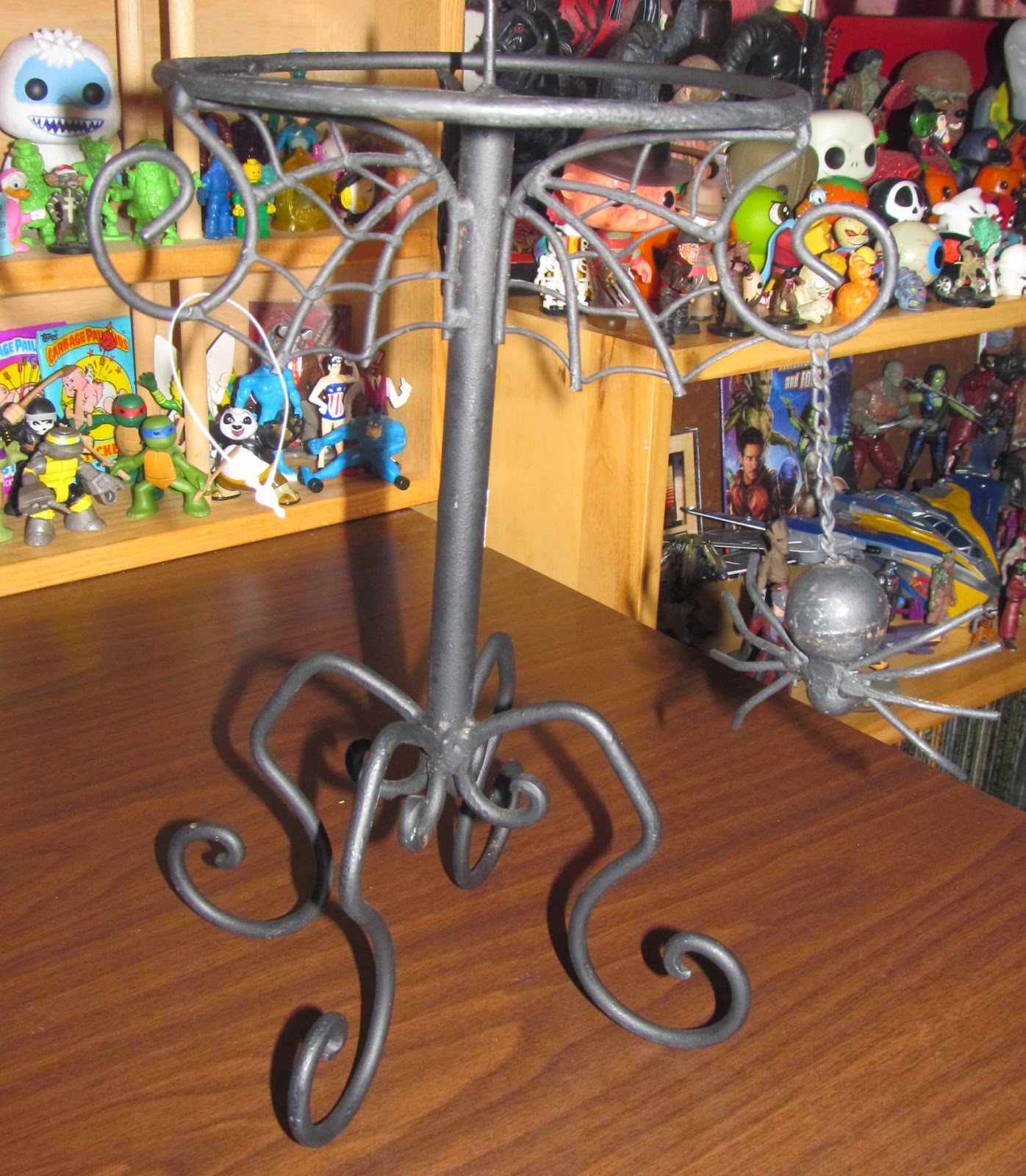 This candle holder holds one of those MASSIVE three-wick candles and has a  metal spider hanging off the side. How could I pass that up? 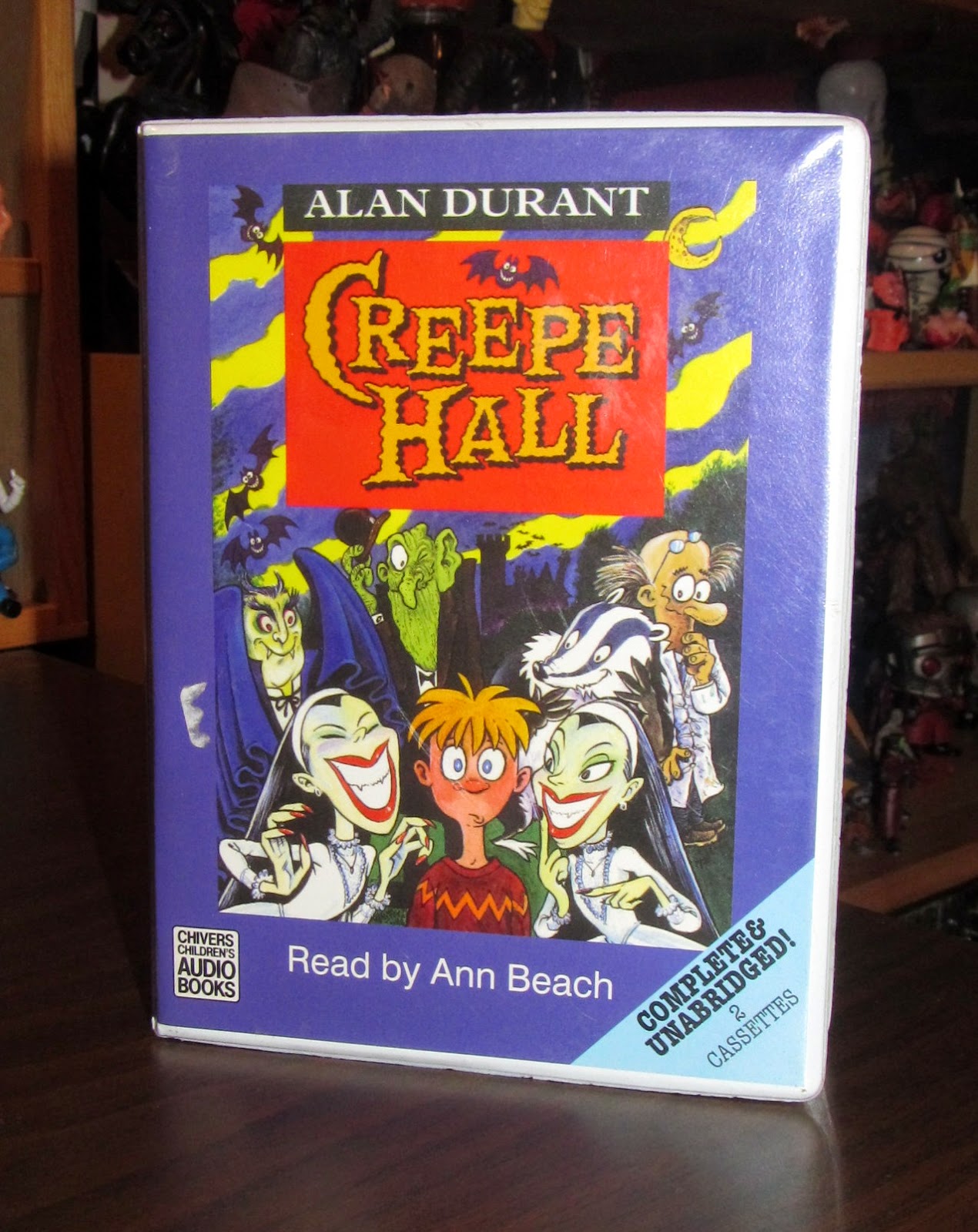 In the Halloween section I also found this book-on-tape that I thought would make a nice edition to my flourishing cassette collection. It's called "Creepe Hall" and is a story that sees a normal young man living in a houseful of monstrous family members. As soon as I have something I can actually play my cassette tapes on... I'm giving this thing a listen. 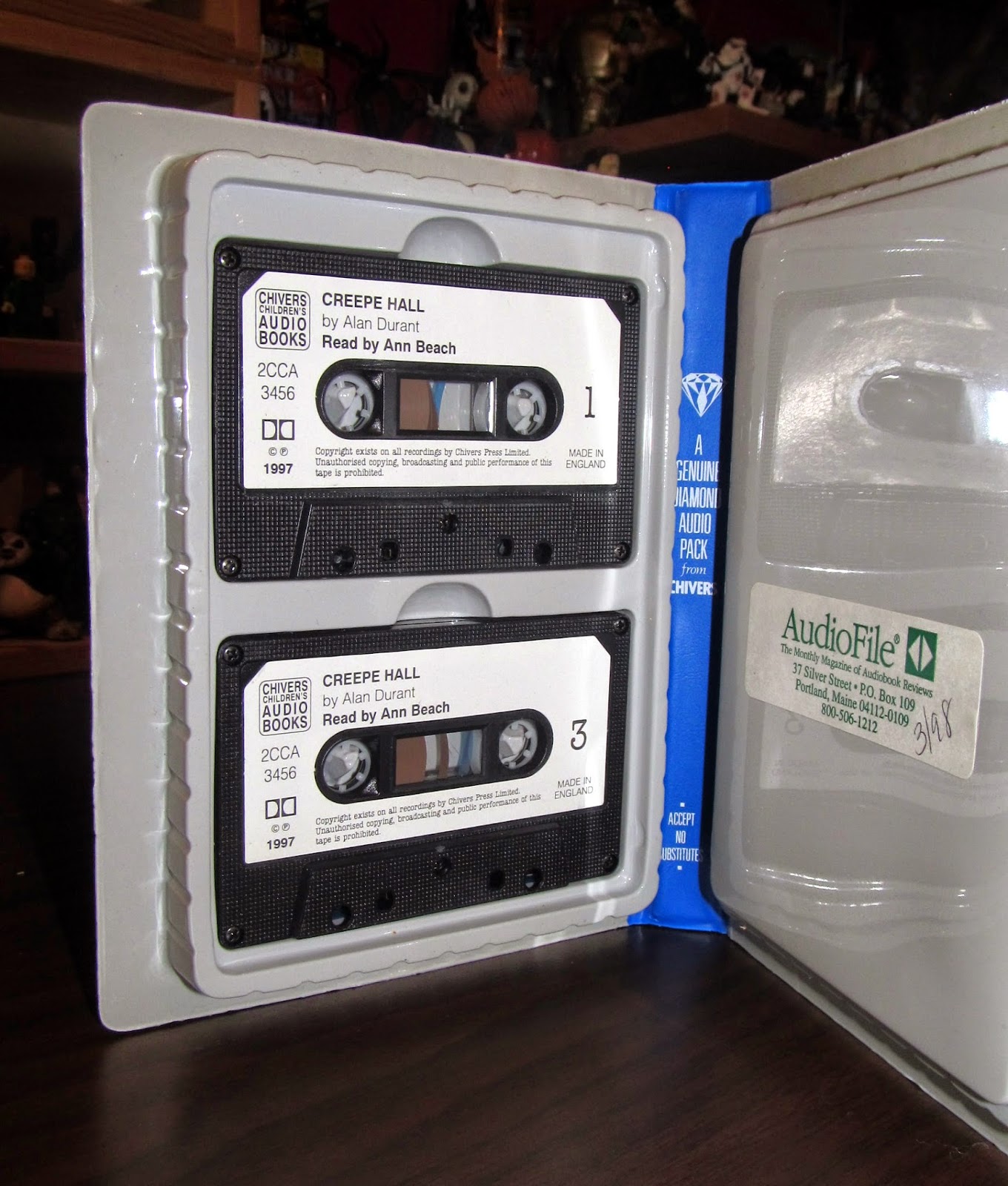 Here's a shot of the cassette tapes inside because I don't know why. 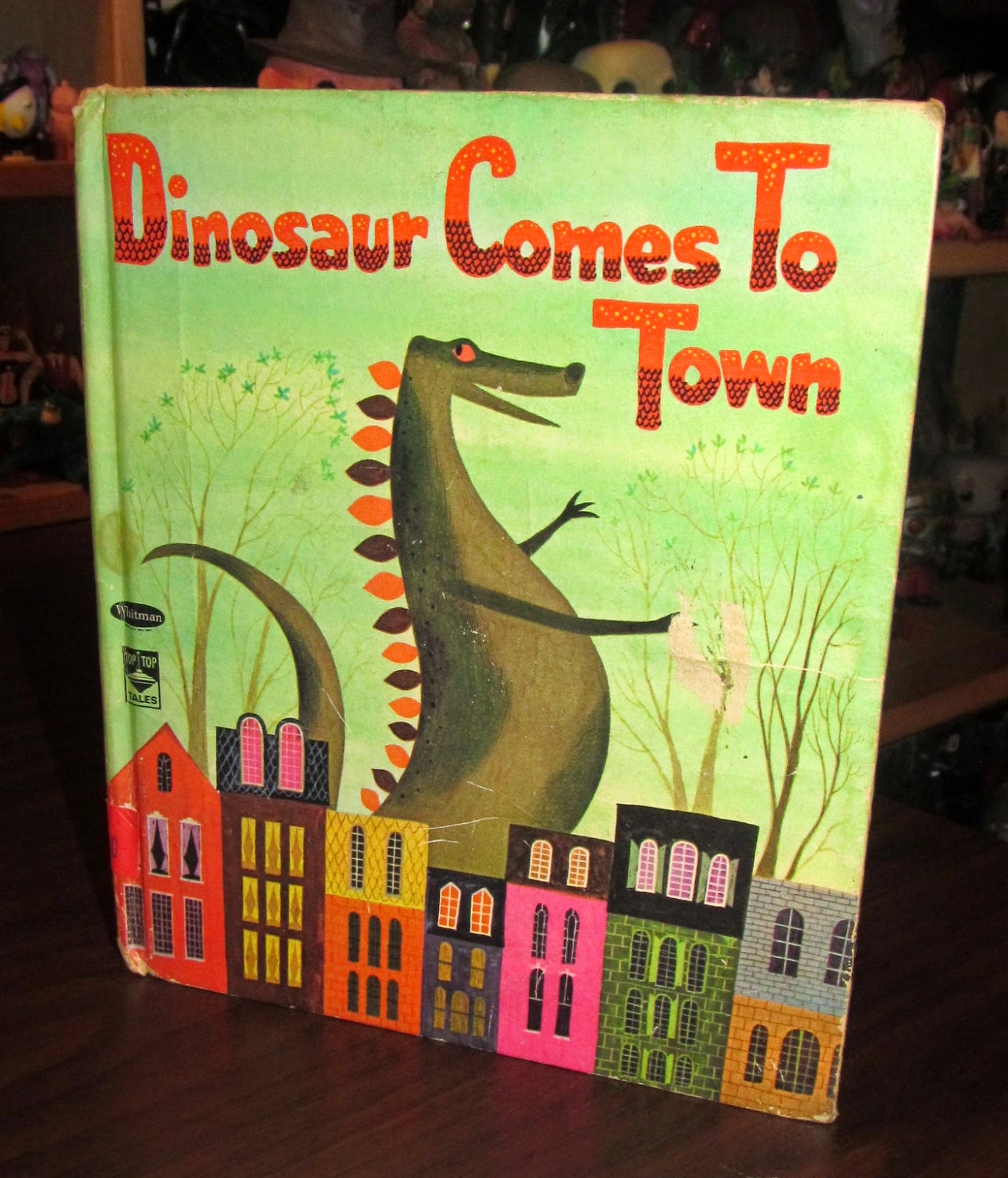 While technically not a Halloween book, I am including Dinosaur Comes to Town in our yearly Halloween reading pile from now on. The animal inhabitants of a small wooded area near a town are all terrified and on the run because a "meat-eating dinosaur" is on its way. 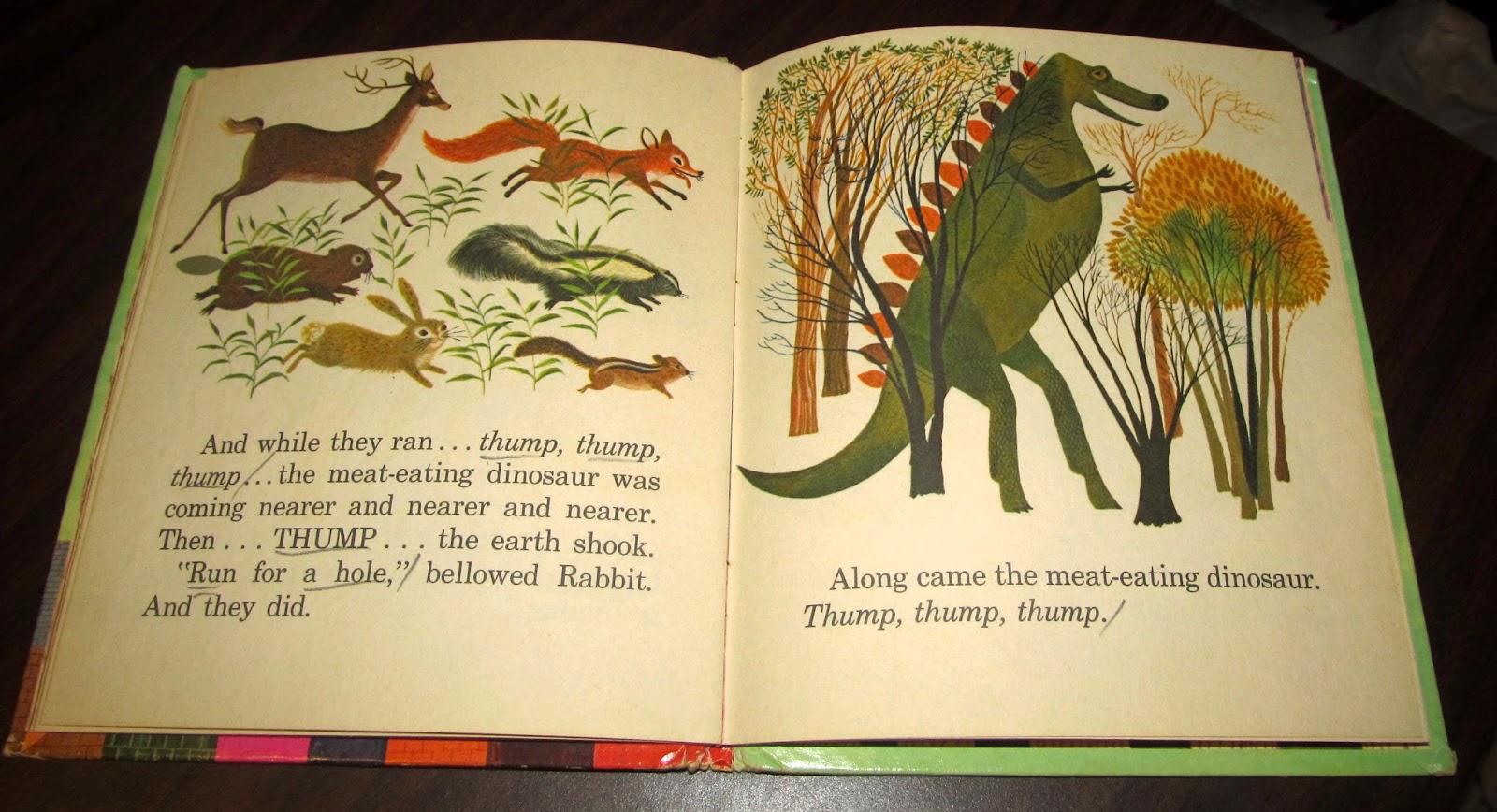 I love the aesthetics of the book, and the design of the dinosaur, which is almost more dragon than anything. 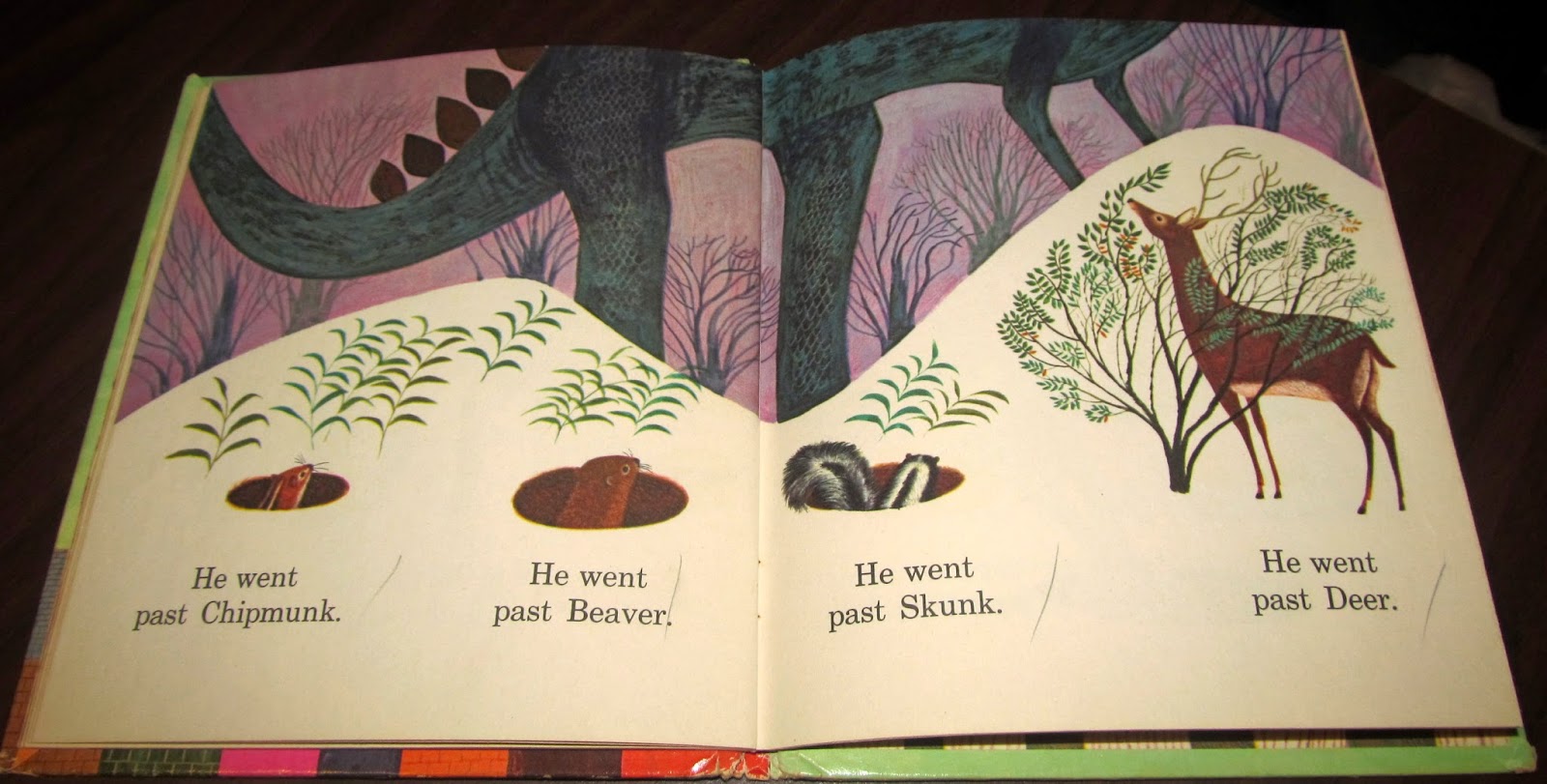 The story is weird and has a surprising ending, which I found funny and I'm sure my kids will like it too. 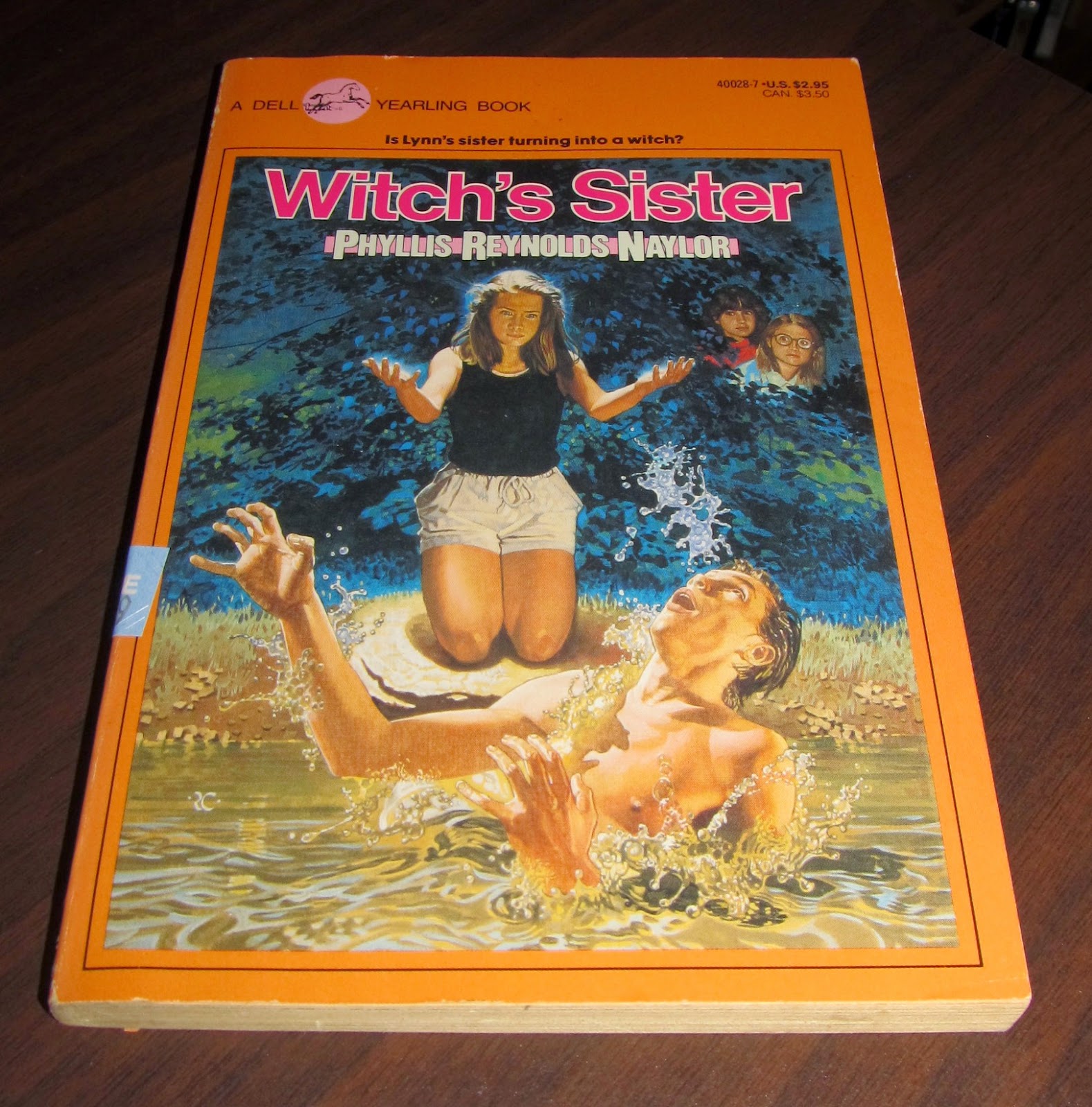 Apparently Phyllis Reynolds Naylor's Witch saga has 7 books in it, and starts right here with Witch's Sister. You can't have Halloween without witches can you? Actually really looking forward to reading this one. I vaguely remember the book cover from grade school. 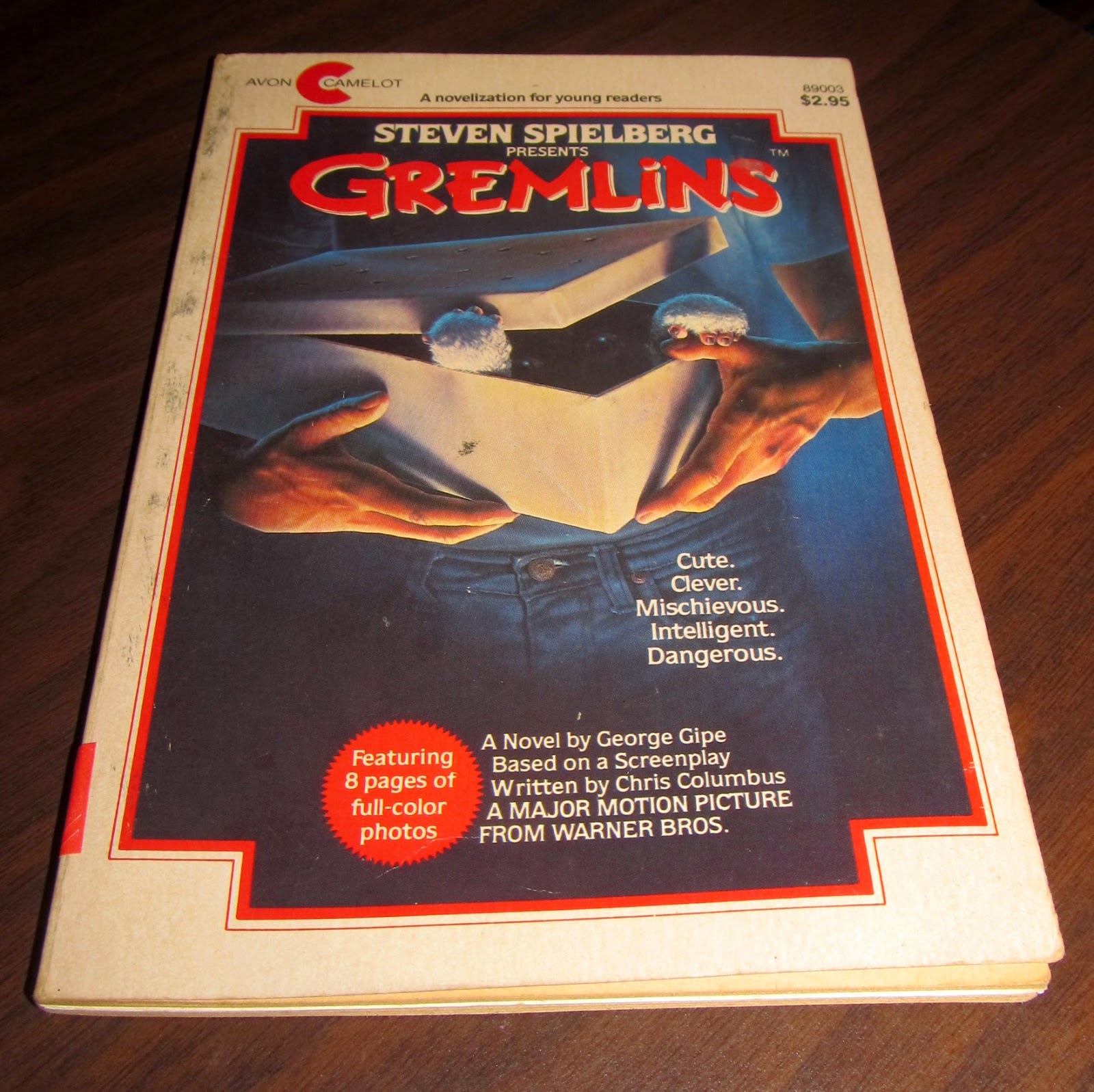 Probably my absolute FAVORITE find from this trip is this young-readers novelization of Gremlins. love Love LOVE finding novelizations of awesome 80's flicks for any aged readers. 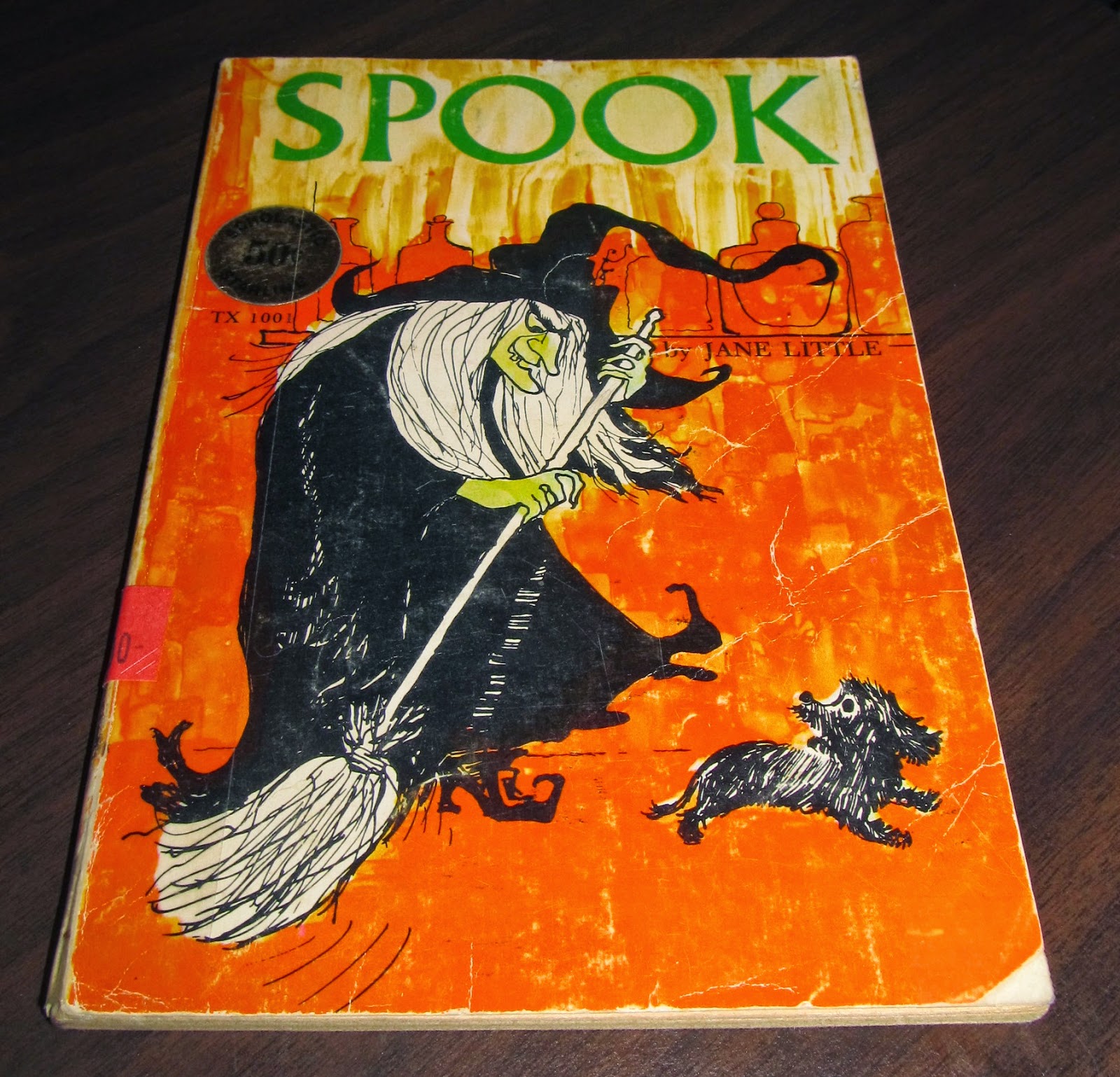 Spook by Jane Little is a cute little chapter book. Something to read to the kiddos when they get a little older than they are now. It's a book about a dog who belongs to an evil witch, who would much rather own a cat... and his quest to find a home with a little boy who loves him. 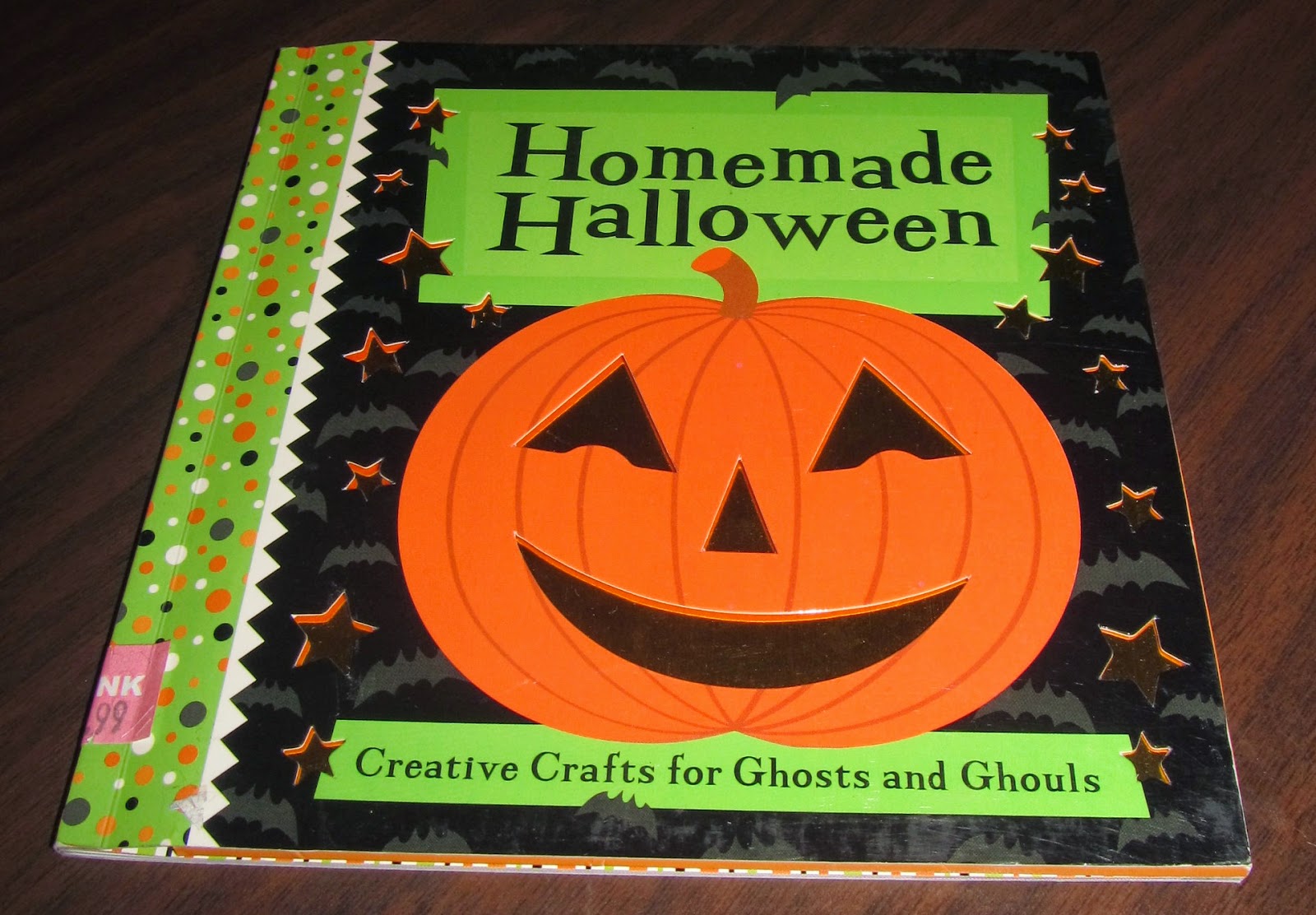 And finishing off the Halloween items is this little craft book Homemade Halloween. This is a nice one again for someone who has kids and wants to do some spooky crafts with them. Which I do... and I do. 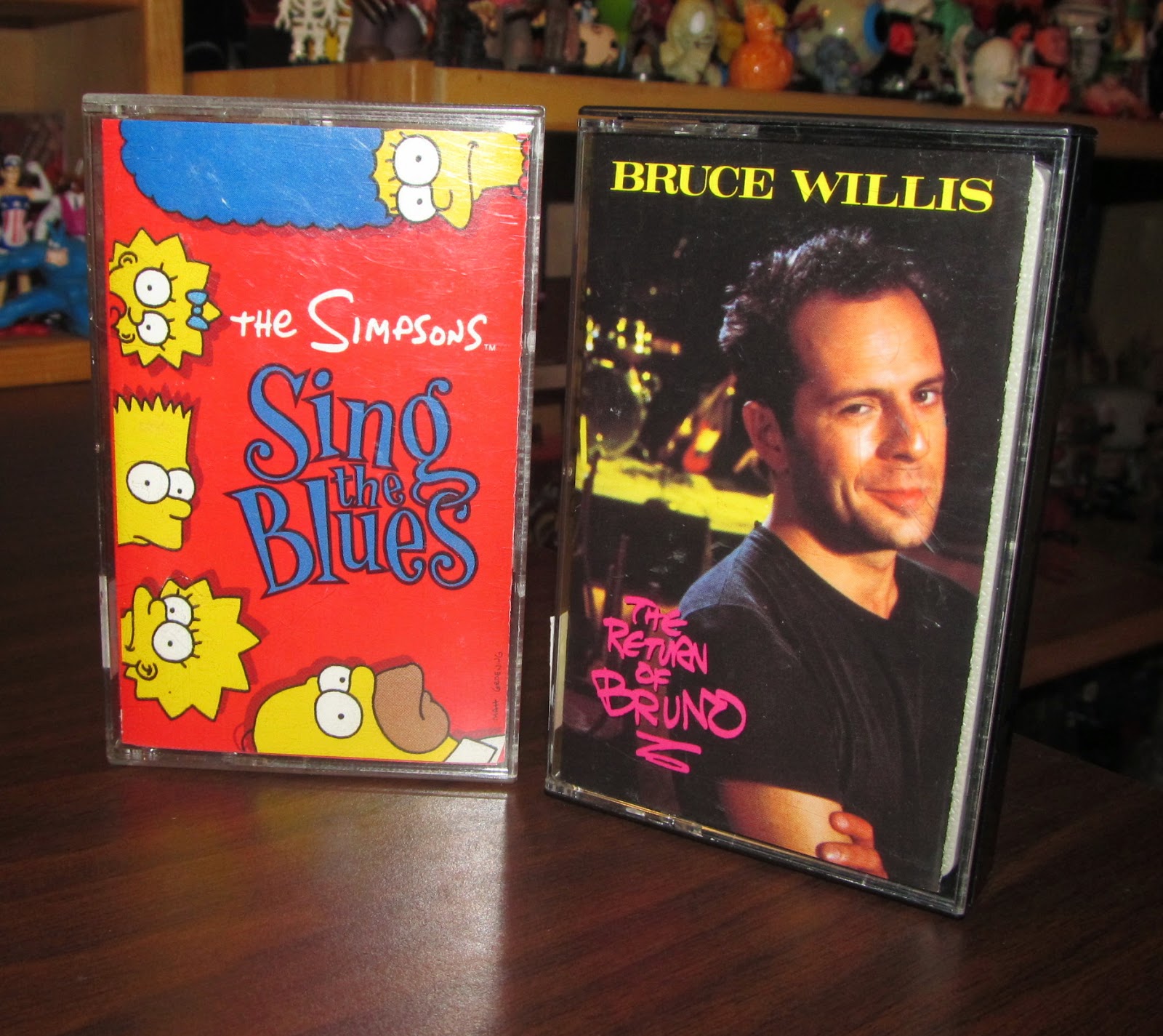 Drifting on away from Halloweentown, we have a couple of cassettes to add to my collection that are NOT Halloween related. Here we have: 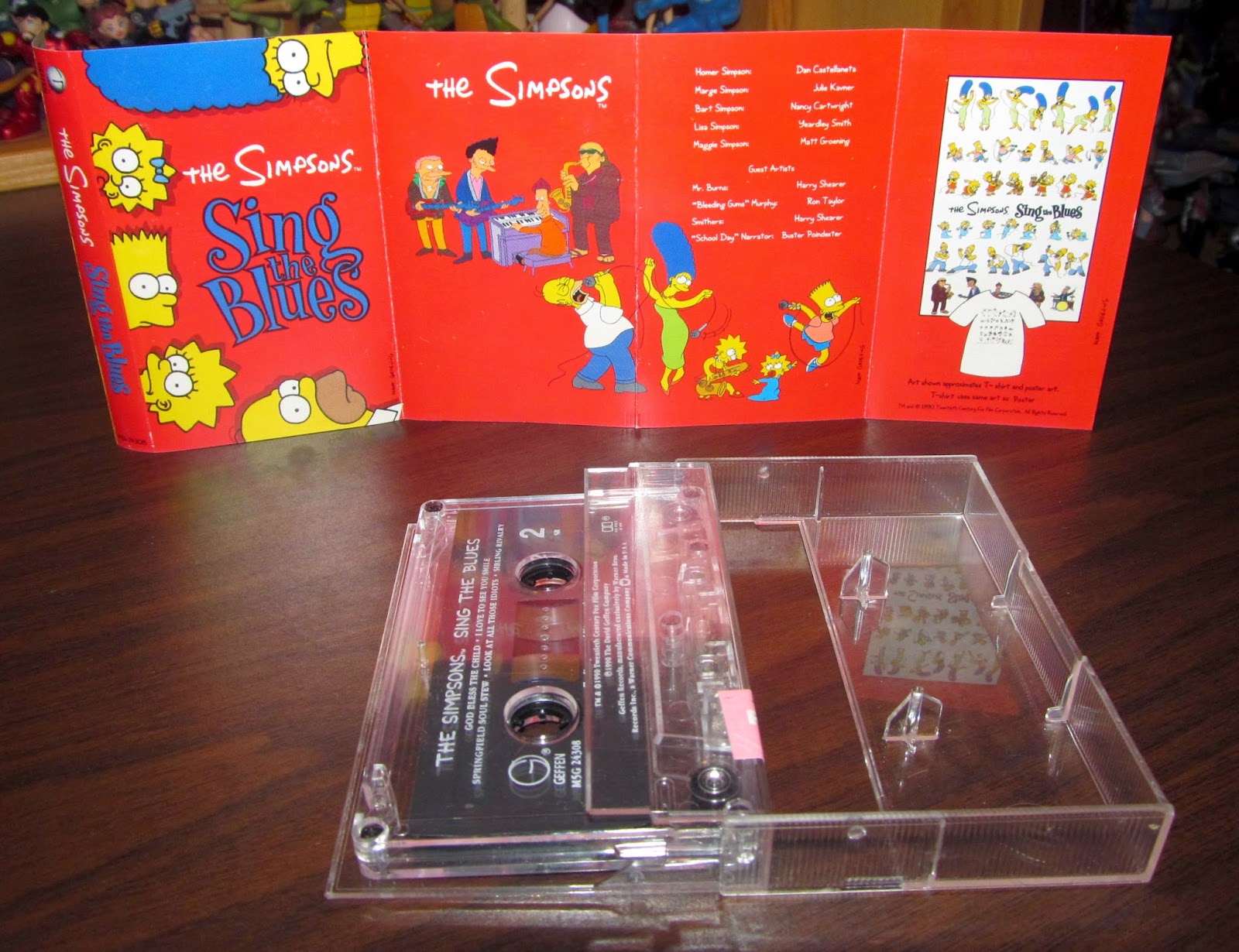 "The Simpsons Sing the Blues" which was a CD I owned as a teen and because it had "The Bartman" and more importantly "Deep Deep Trouble" and MOST importantly, "Look at All Those Idiots!" which is a song I would like to have playing on the P.A. system at my place of employment on a loop. 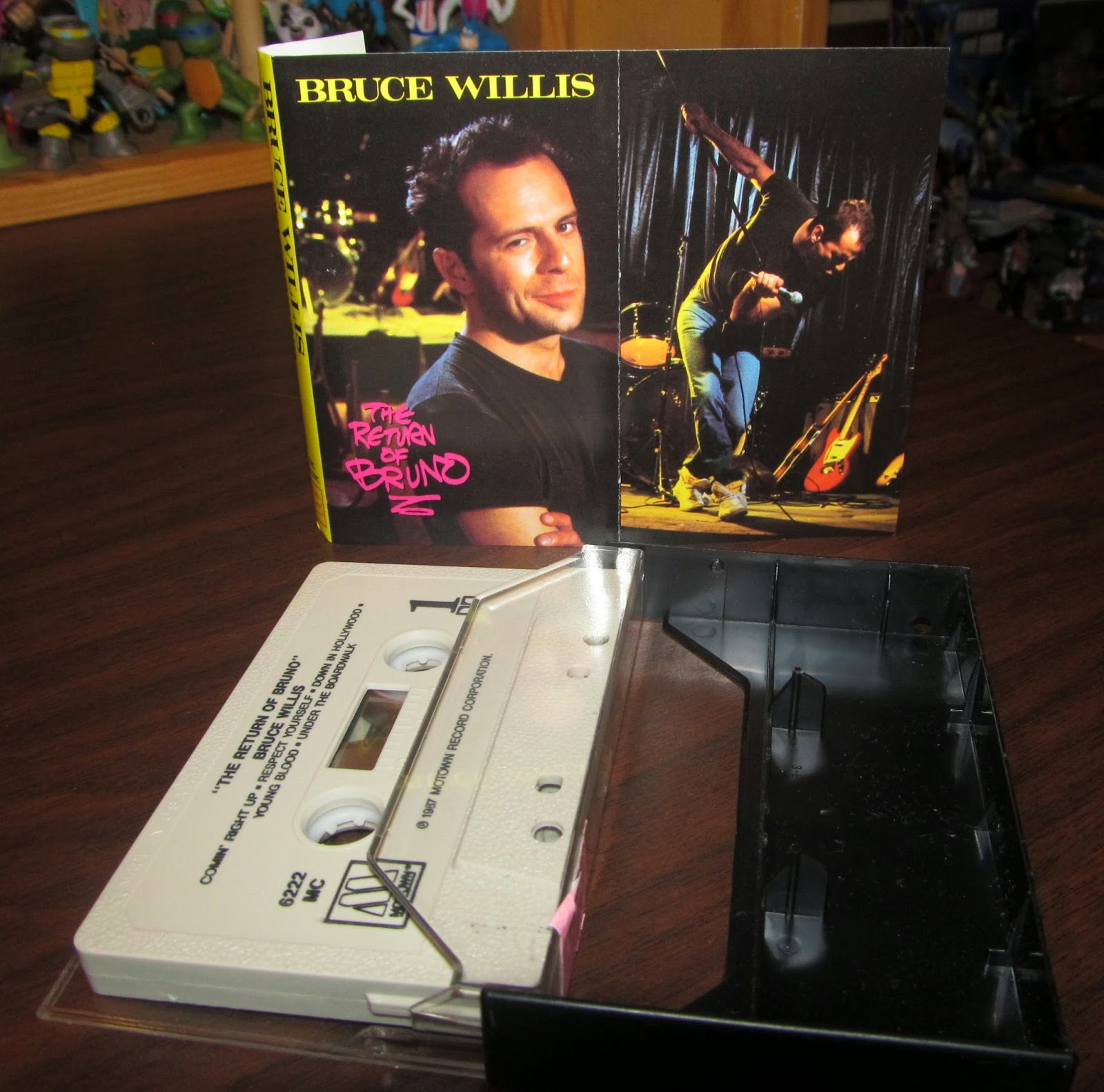 And next we have Bruce Willis's "The Return of Bruno" which has the song "Respect Yourself" included. If you can see the picture of Bruce Willis on the right side of the liner card there... you basically know everything you need to know about this cassette and why I bought it. I swore I wouldn't buy anything ironically for this collection of cassettes. Only things I genuinely love. I can't say I genuinely love the songs on this cassette... but I can say that I genuinely love that it exists. Look at that man. Just look at him. He's so ridiculously happy. 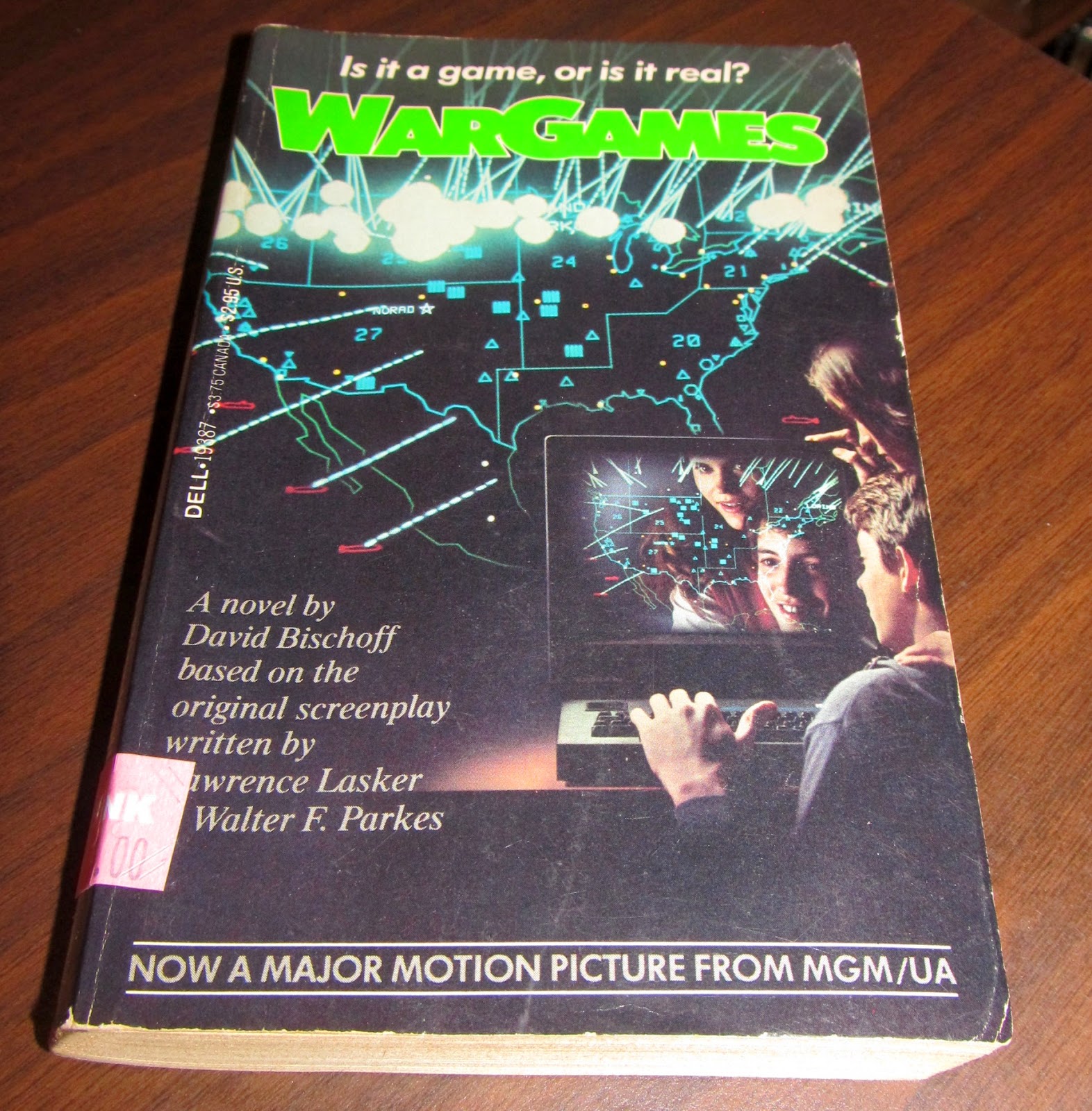 And finally, I found myself a copy of the novelization for War Games! This was a pretty genuinely exciting find to make. As heavily as this film is referenced in Ernest Cline's book, Ready Player One, it can't help but have bloomed anew in my heart with all new levels of nostalgic love. So there you have it folks! I'll be back soon with more Goosebumpy Goodwill Goodies. So until then, Happy Hunting!
Posted by Derek Ash at 2:21 PM