Halloween Countdown Day 17: A Package From Brian "The Trash Man"

So my friend Brian, "The Trash Man" over at Pop Pop! It's Trash Culture and I often exchange mail. And it's almost a cheat to include his packages in this countdown because he almost always sends me something that could be construed as Halloween-y. But hey, it's my blog, so I cheat. And besides, there are some pretty overt, directly Halloween-y things in this package to share. 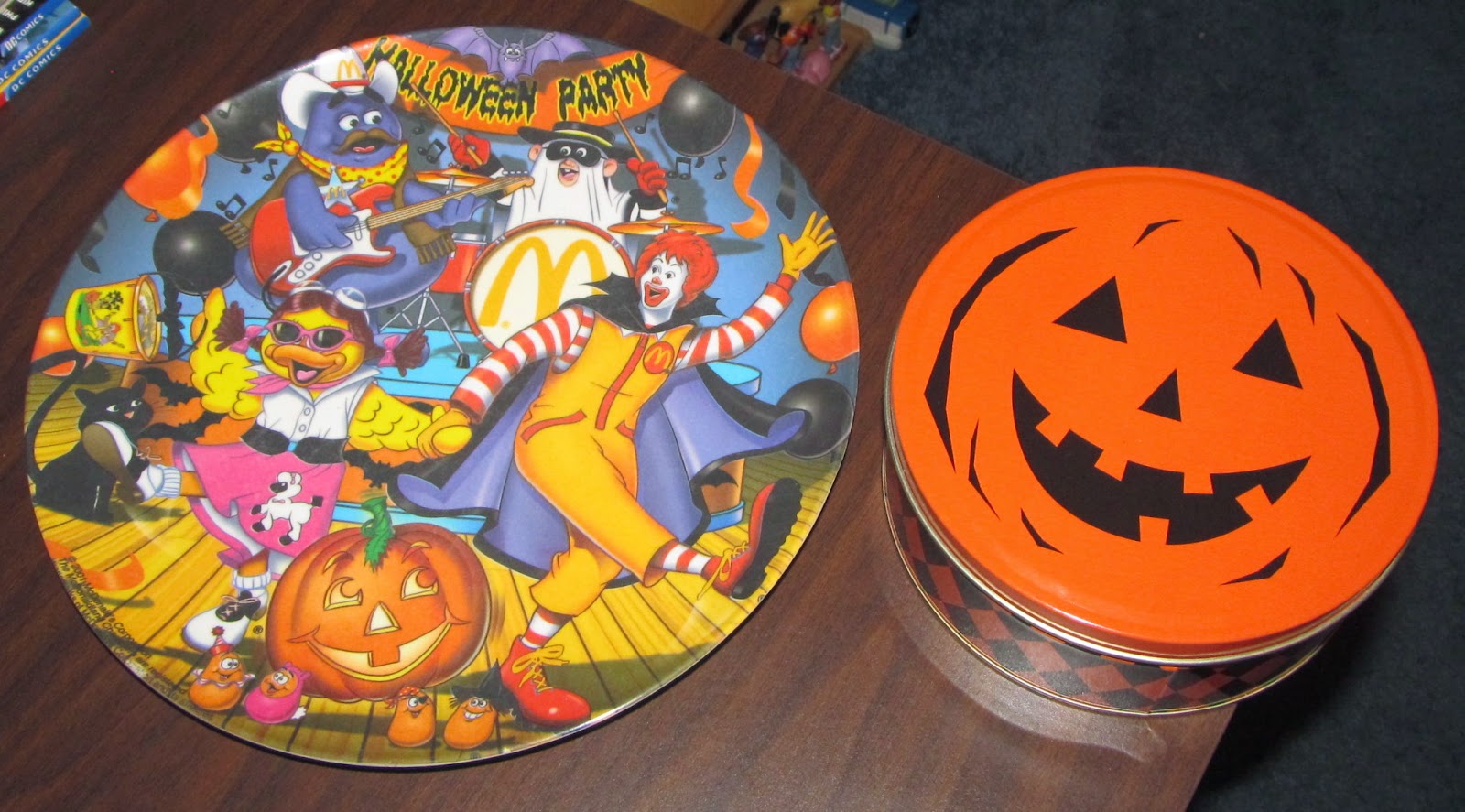 Like for instance, these two. First up we have an INCREDIBLE McDonald's plate featuring the McDonaldland Gang having a Halloween hoedown! I actually have no idea if its a hoedown or a sock-hop but based on Birdy's and Grimace's costumes, it could go either way. Next, the jack-o-lantern tin on the right which is cool enough in its own right, but once opened was revealed to contain a veritable ARMY of mini-figure toys and other goodies. So lets look at those next.

Still staying firmly in the theme of Halloween, we have these Monster in My Pocket figures. I had almost ALL of these (well, series 1 anyway) when they came out back in 1990. Nowadays my MiMP collection is getting respectable again, but is a shadowy echo of its former glory. 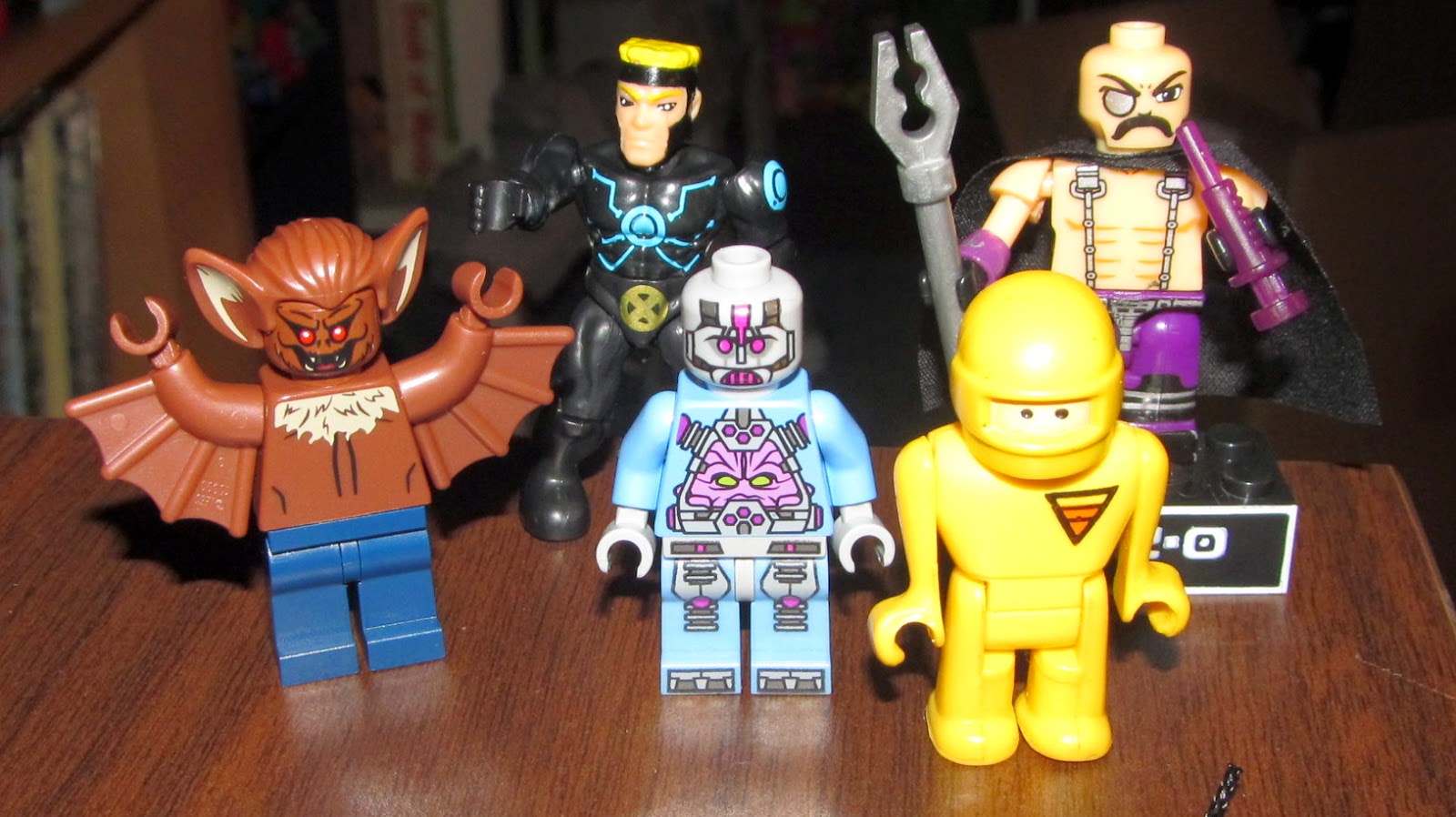 Next a squad of LEGO-style guys, ranging from LEGO and Mega-Bloks to KRE-O and whatever that little yellow space-guy in the front is from. First we have the INCREDIBLE Man-Bat figure which I LOVE!!! and Havok from mega-bloks. Havok is one of my favorite X-Men. I now own a LEGO Krang-bot from the new TMNT Nicktoon, and Dr. Mindbender from G.I. Joe KRE-O. 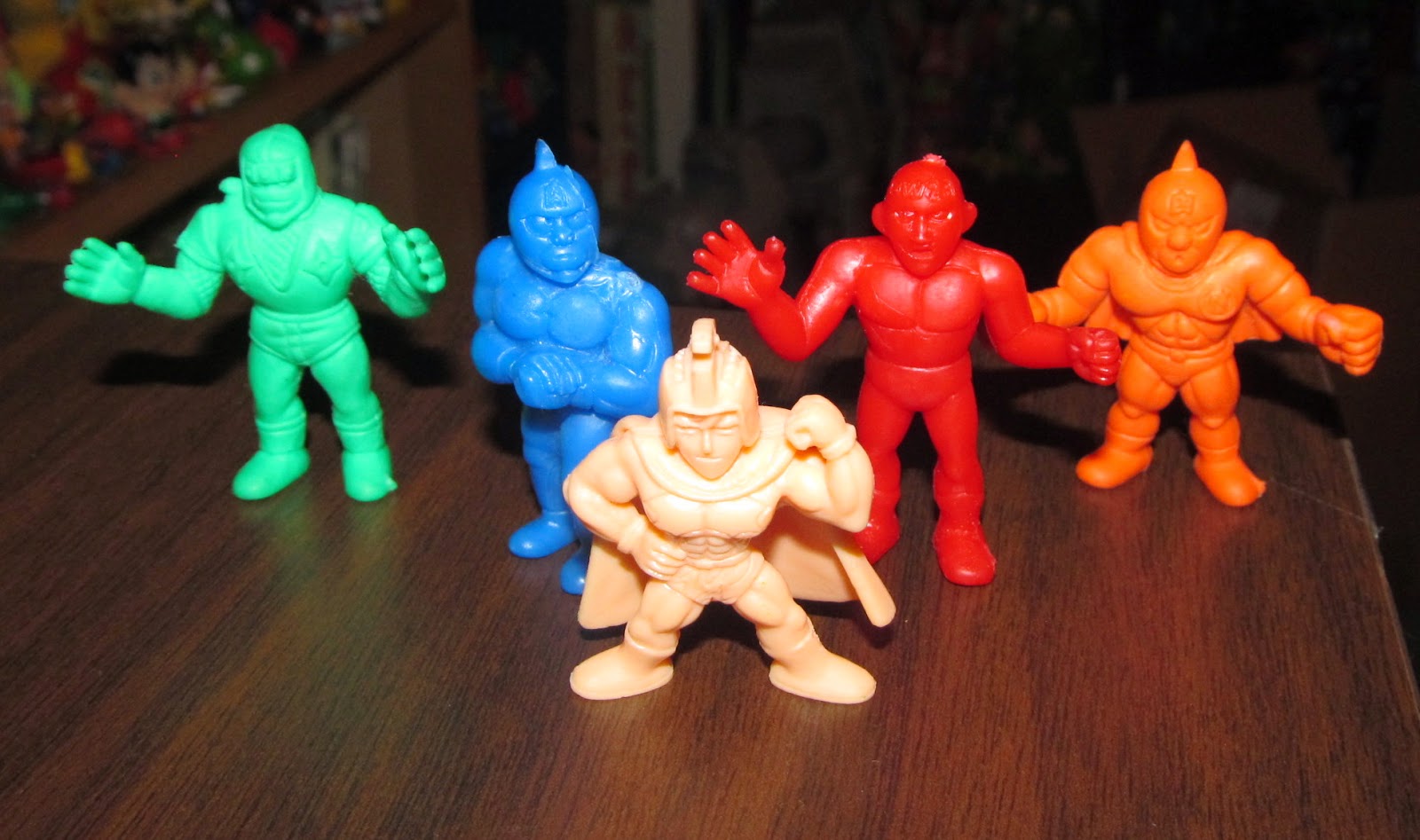 Next up are an assortment of toys from various different MUSCLE-related lines. The teal and orange guys are from the original Kinkeshi line that spawned MUSCLE Things here in the states. The Blue and red guys are hard plastic MUSCLE Thing toys, and the guy in the center is from the Ultimate MUSCLE line. Mini-figures were really like my own personal crack as a kid. I collected the hell out of both of the pictured lines above. Battle Beasts and Army Ants!!! Between all the MUSCLE Things, MiMPs, Garbage Pail Kids Cheap Toys, and the ghosts and sidekicks from the Real Ghostbusters and TMNT lines, plus just other random mini-figures from other lines... I had an army of mini-figures! The Battle Beasts pictured above are "Danger Dog" and "Fleet-Footed Ante-Lope" The Army Ant is is called "Heave-Ho". 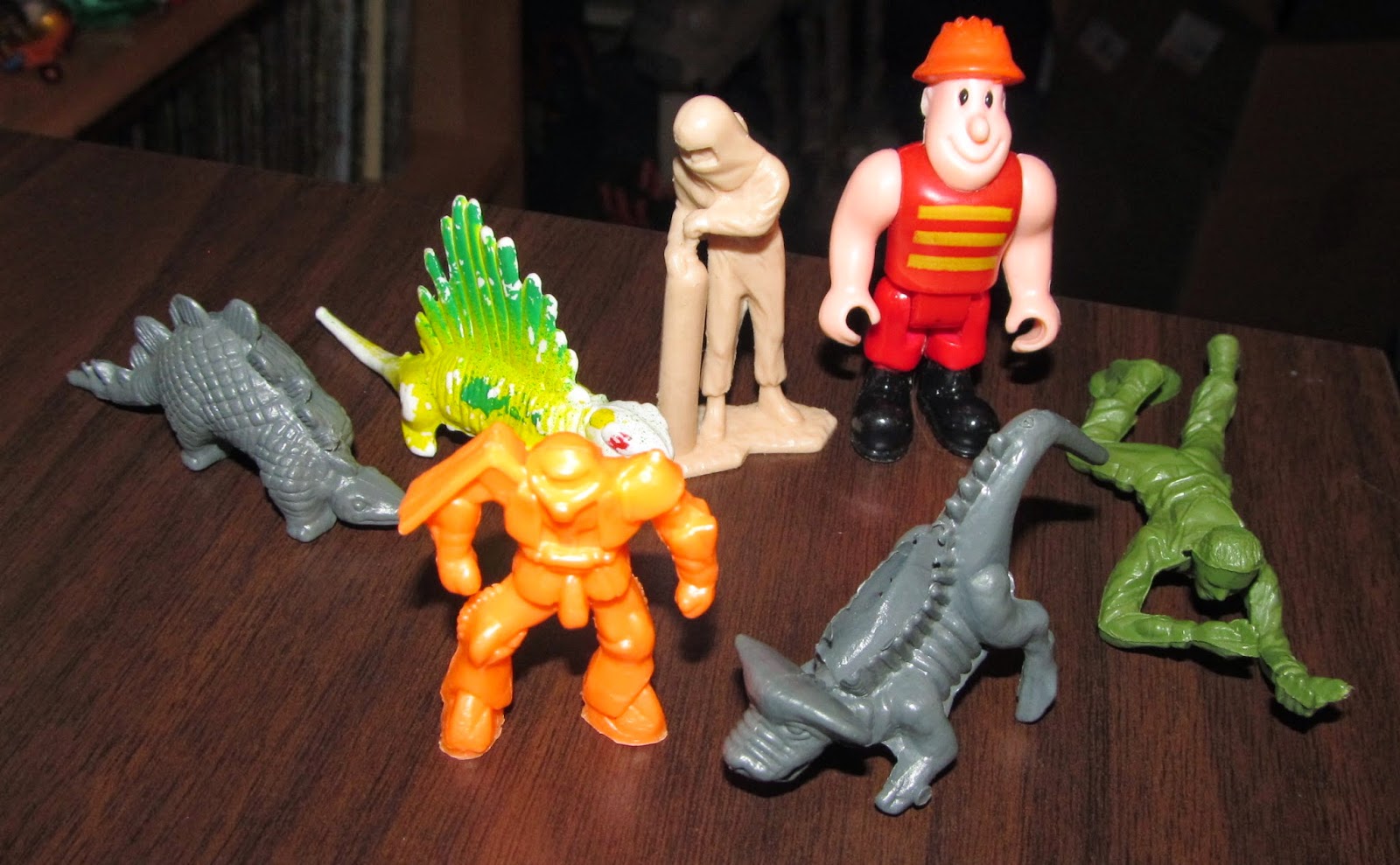 Tiny plastic robots, dinosaurs, and firefighters were also included! I placed the two I loved the most in the foreground. The Orange robot and the weird gray "dinosaur" with two ridges running down its back and a snout like the Luck Dragon from the Neverending Story. 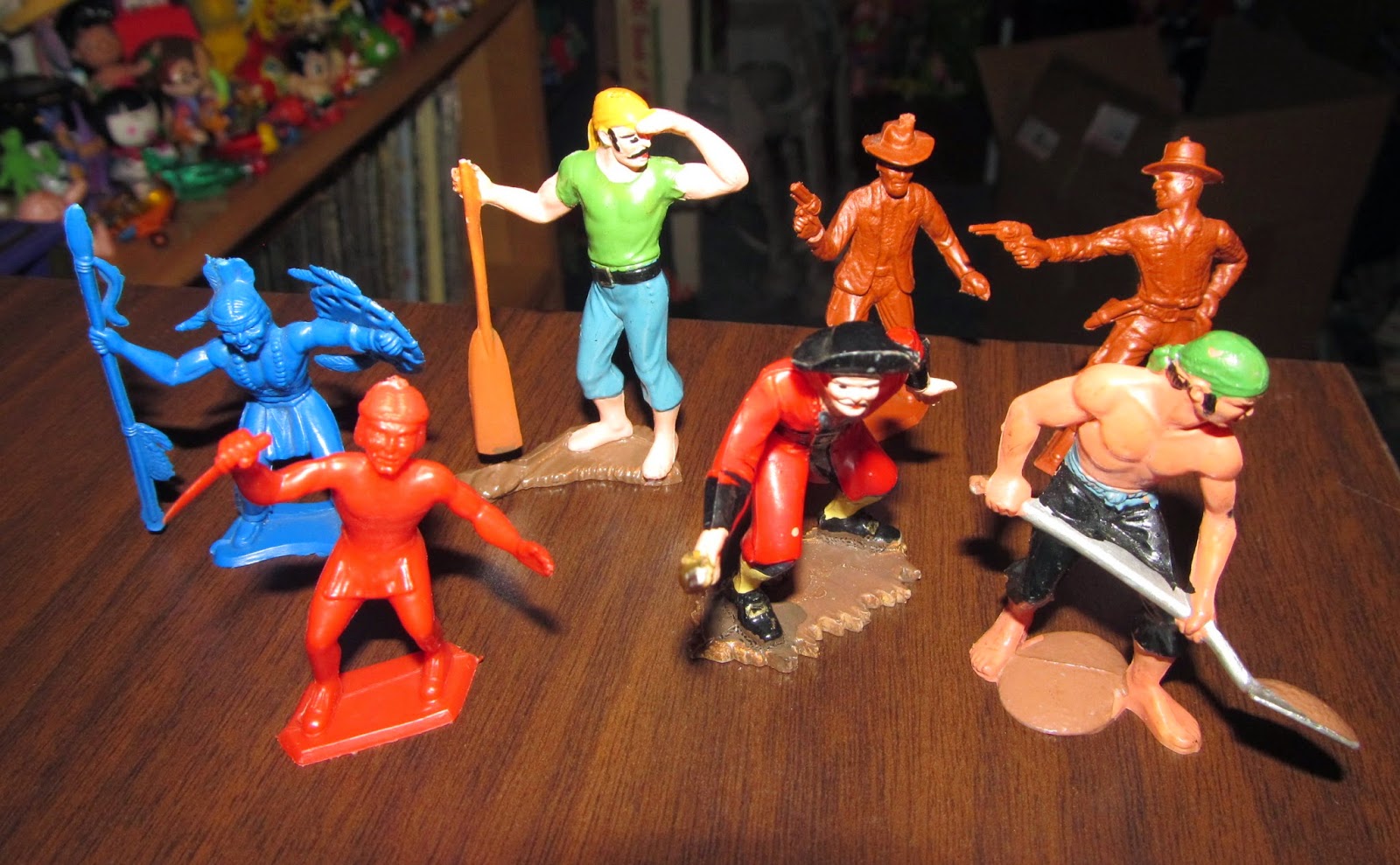 More plastic goodies included these "cowboys and indians" figures (I know that's not P.C. but it feels weird calling them Cowboys and Native Americans) and a set of plastic pirates that I believe are probably cake toppers. The pirates have taken up residence on my Pirate/skeletons shelf, even though they are clearly not skeletons. 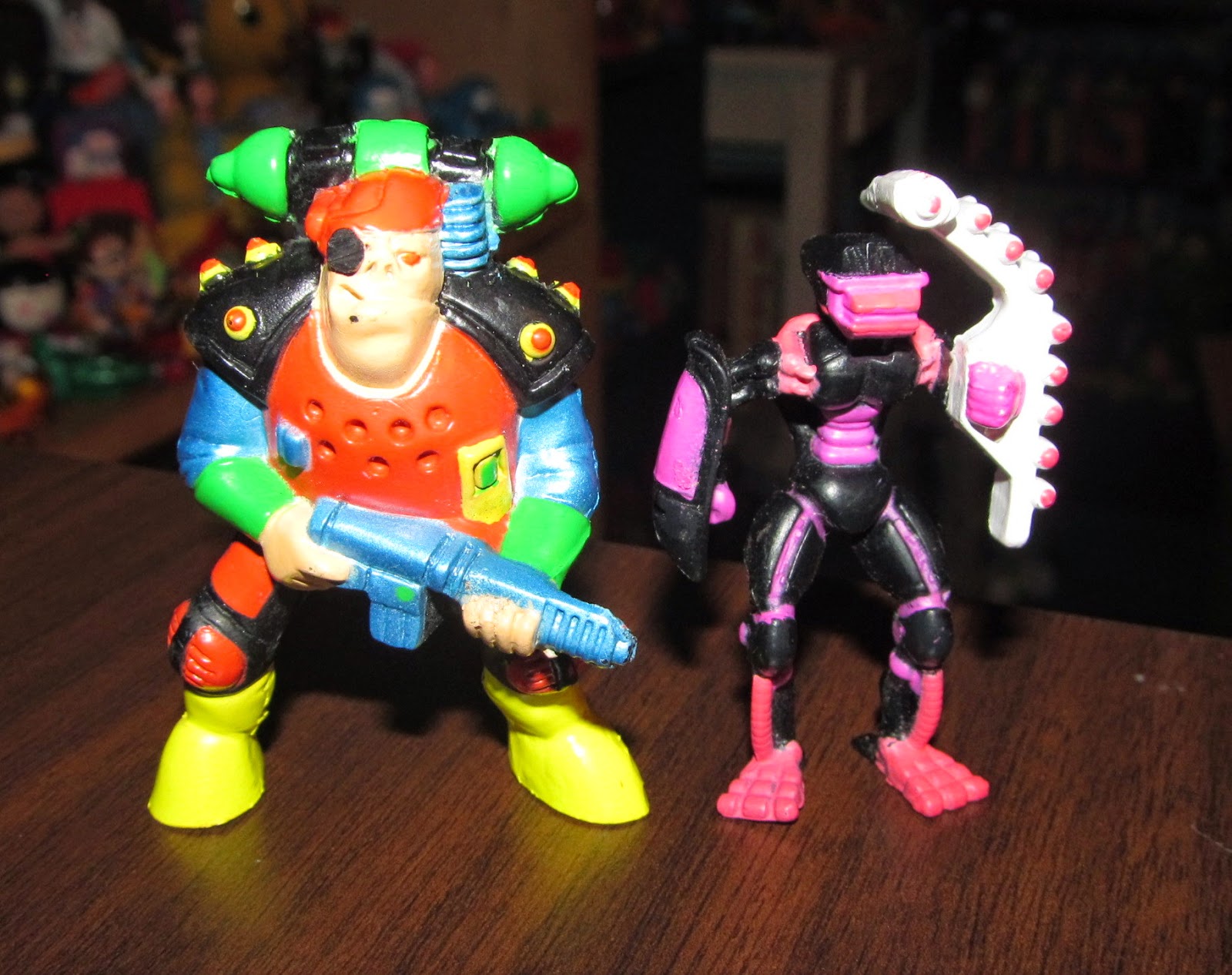 These two figures are from the Trash Bag Bunch line, which I missed out on, but would definitely like to track more down of nowadays. These guys remind me of Bebop from TMNT and Mutant Zero from the Initiative in a ridiculously vague way. 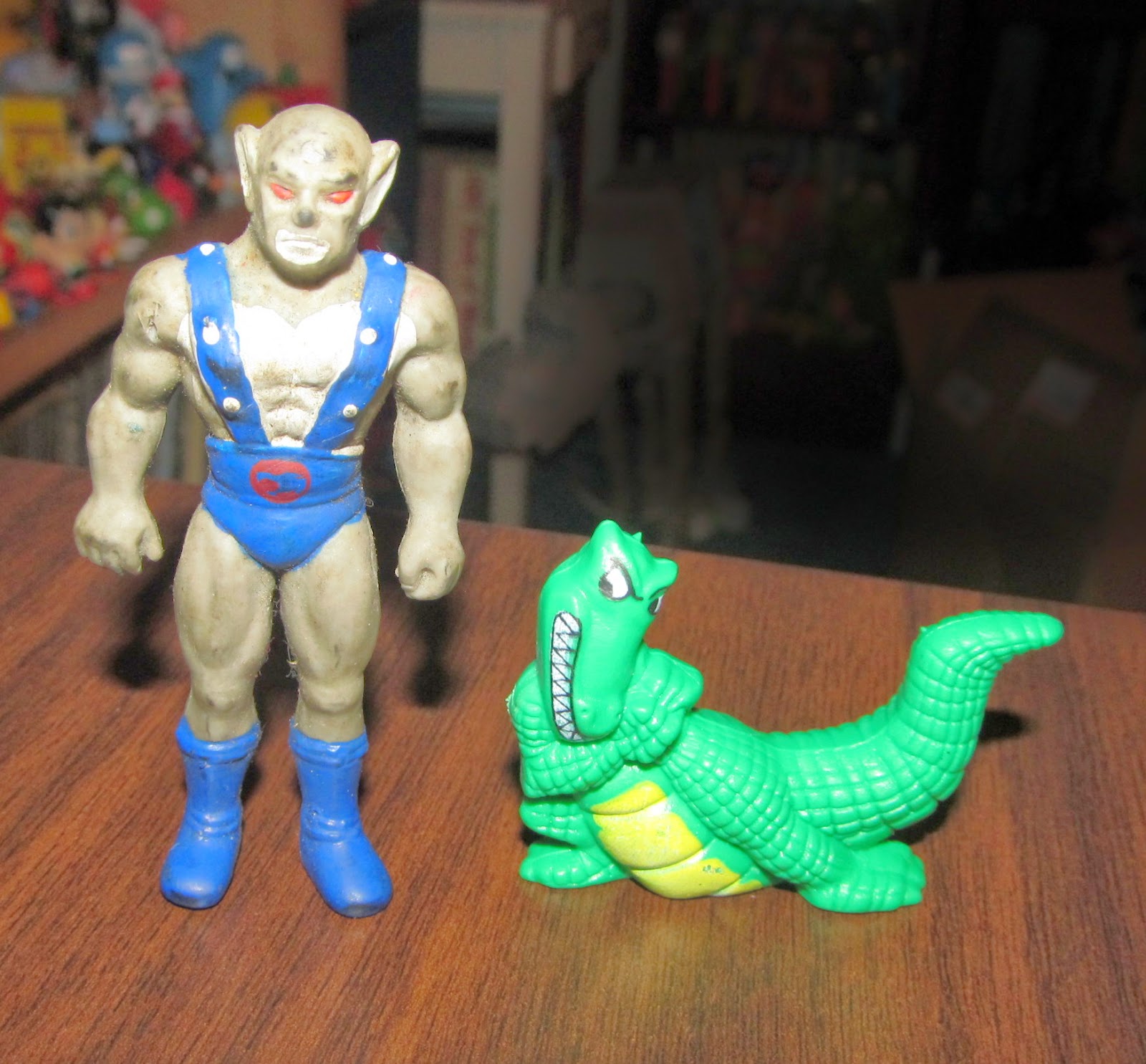 Another pair of my near-favorite toys from the whole pack were these two. A Panthro eraser!!! I was (and still am) a huge lover of Thundercats. And Panthro was one of my favorite characters from that show as well as my favorite action figure from that line. The crocodile is from old Super Golden Crisp cereal commercials featuring Sugar Bear. I am also a huge fan of advertising mascots (and their nemeses) so this hungry guy is a perfect addition to my collection. 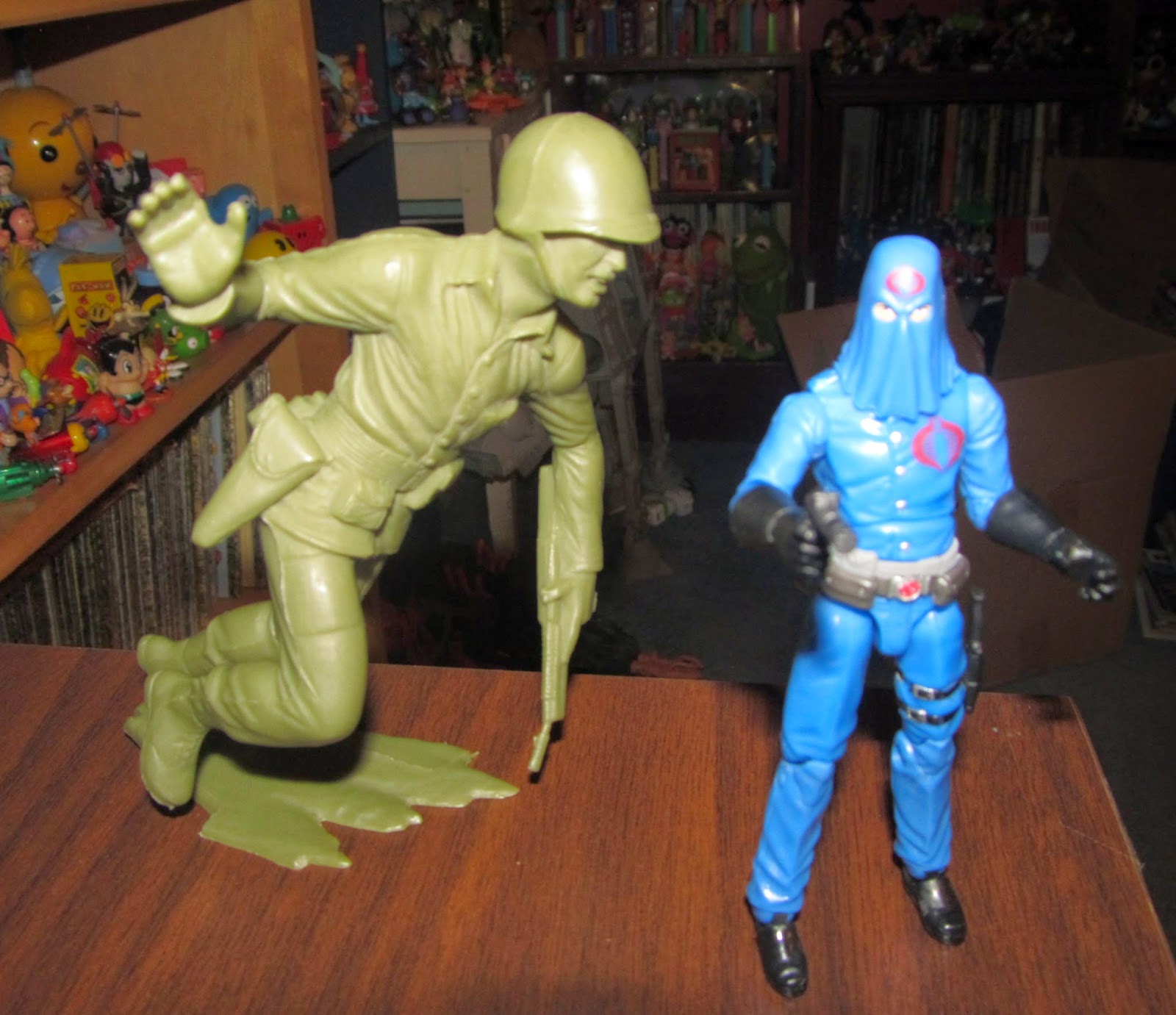 On the military side of things, The Trash Man included this mega-sized army man and a Cobra Commander action figure! C.C. ended up on my Joes shelf. He's the classic 80's villain and I love both the hooded and helmeted versions of the character. 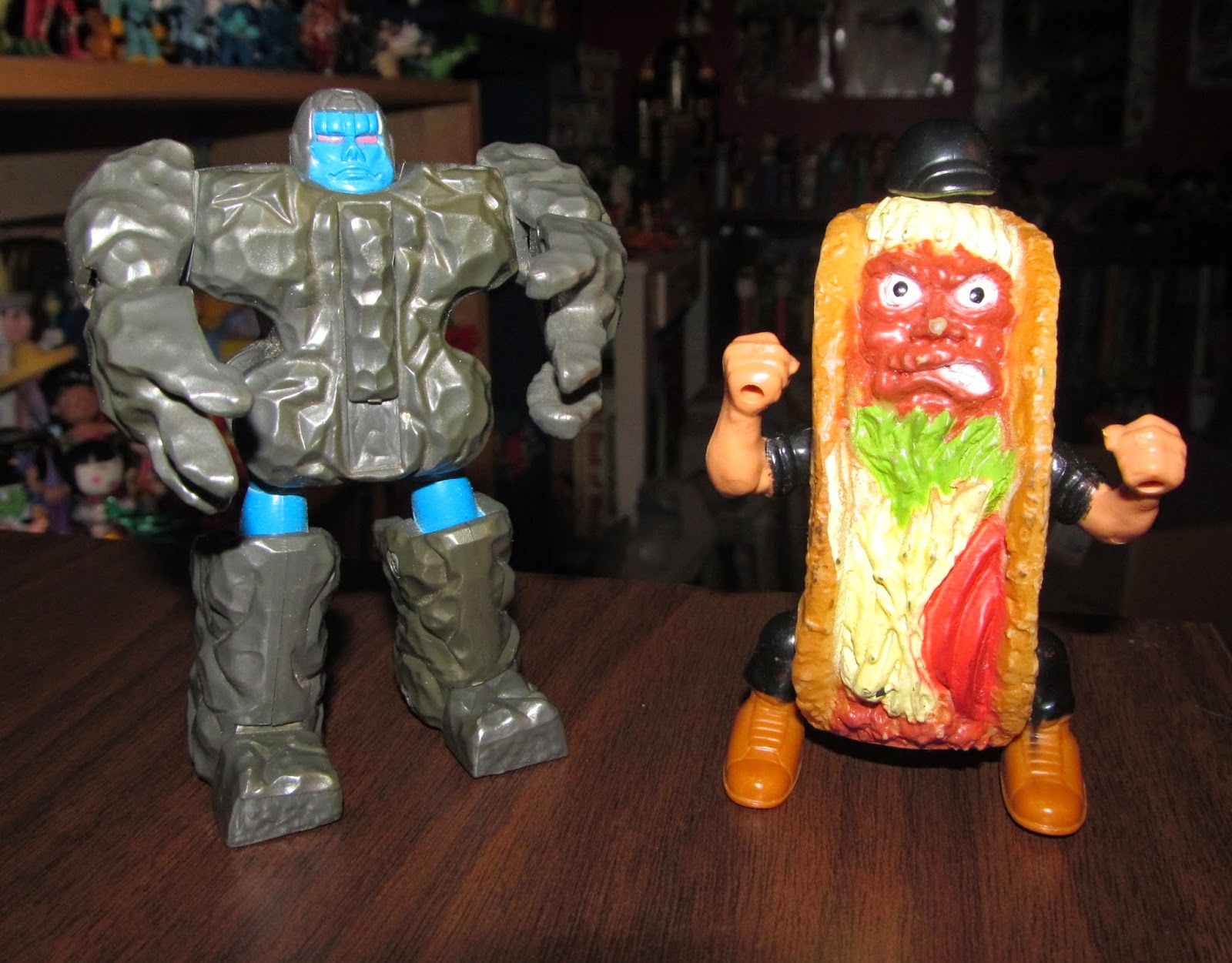 So Brian and I share an enthusiasm for the Rock Lords. I had most of the toyline when I was a kid, a receiving Granite here made me rush to eBay to see how much it would cost me to fill out the rest of my collection. Turns out... kind of a lot. It's weird to think that a series of toys that had warriors transforming into lumps of rock can go for so much money these days... but if I love 'em, obviously a lot of other people out there probably do too. The fella on the right side there is Taco Terror, one of the Refrigerator Rejects from the Food Fighters line of toys from back in 1988. I've been seeing these things make a huge comeback lately due to nostalgia and the bizarrely awesome concepts and designs of the toys themselves. This was another line that I had a BUNCH of as a kid. 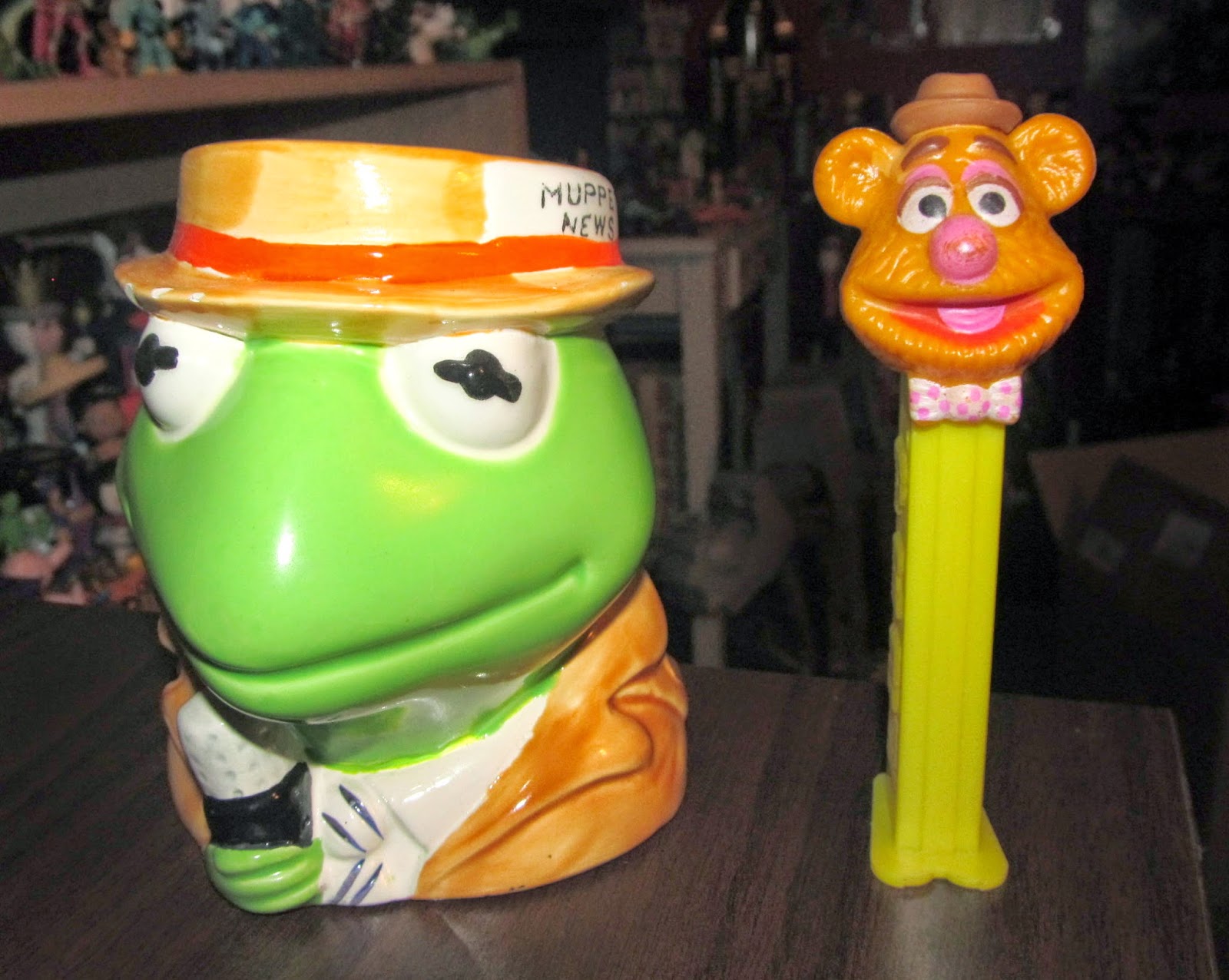 In the category of "items that made me gasp out loud when I removed them from the box" we have this Kermit mug. And not just ANY Kermit the Frog... but his Muppet News Reporter role from Sesame Street. Brian has had some amazing success sending me breakable items via the sometimes-questionable postal service. This is one of my absolute favorite versions of Kermit EVER. As this news reporter Kermit would go out and interview the characters from famous nursery rhymes and fairy tales. It was brilliant. The PEZ dispenser is from 1991 and makes a great addition to my current muppet PEZ collection. It wouldn't be a package from Brian without some sweet wax-packs (Technically the Beetlejuice cards are not in a wax-pack, I know. Don't worry about it.) and this package did NOT disappoint! I opened the ALF pack to see who the Bouillabaisseball Card featured. The other two remain sealed. 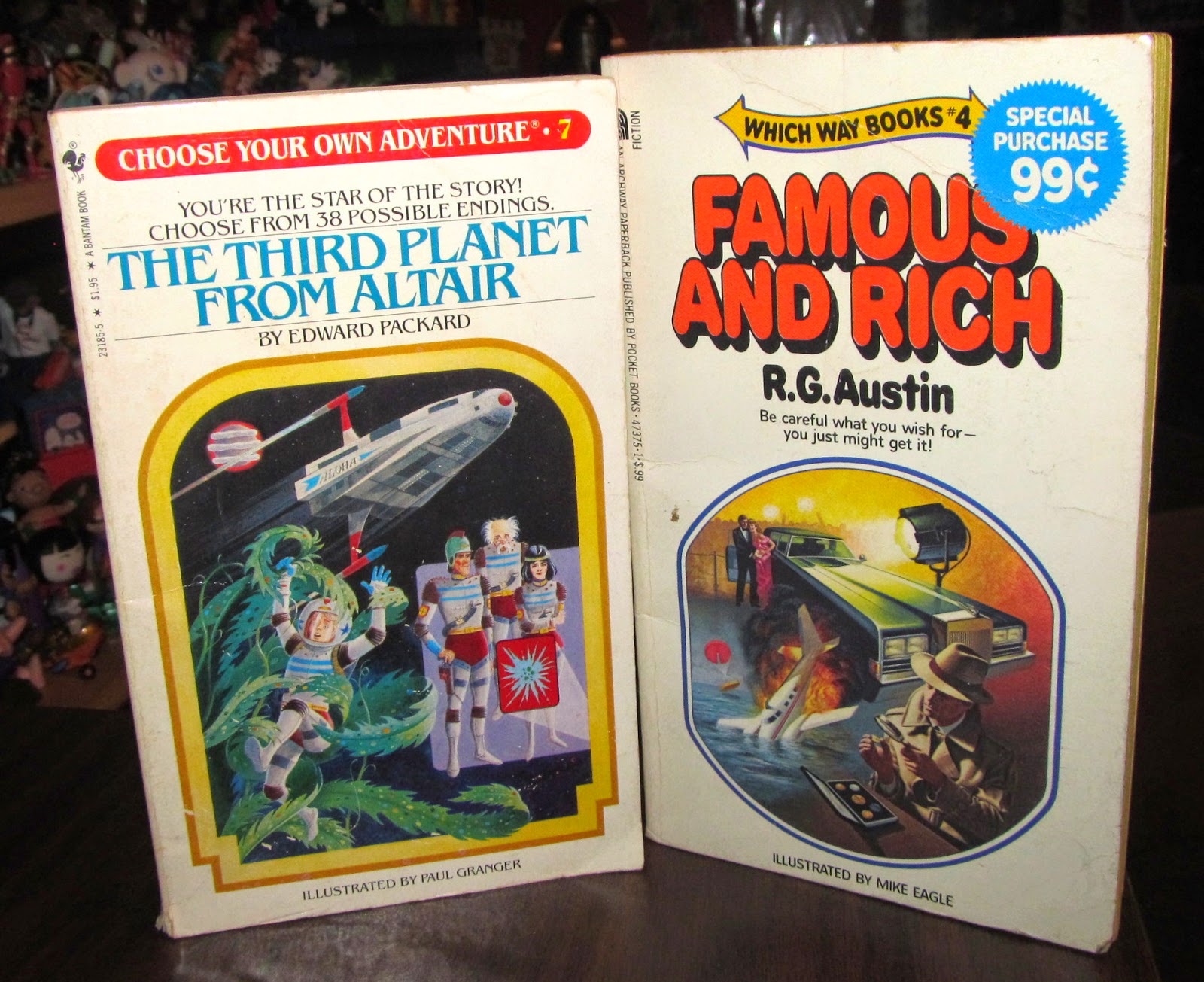 There is probably a very quantifiable laundry-list of items that people have discovered that I love just from reading this blog. Very close to the top of this list is any kind of Choose Your Own Adventure books (or "gaming books" if you're hardcore). And Brian is always hooking me up with these things. The Third Planet From Altair is the 7th book in the CYOA series and Famous and Rich (I'm assuming Robin Leach has the copyright of "Rich and Famous"?) is the 4th book in the "Which Way Books" series. Both look like they will be fun to read. 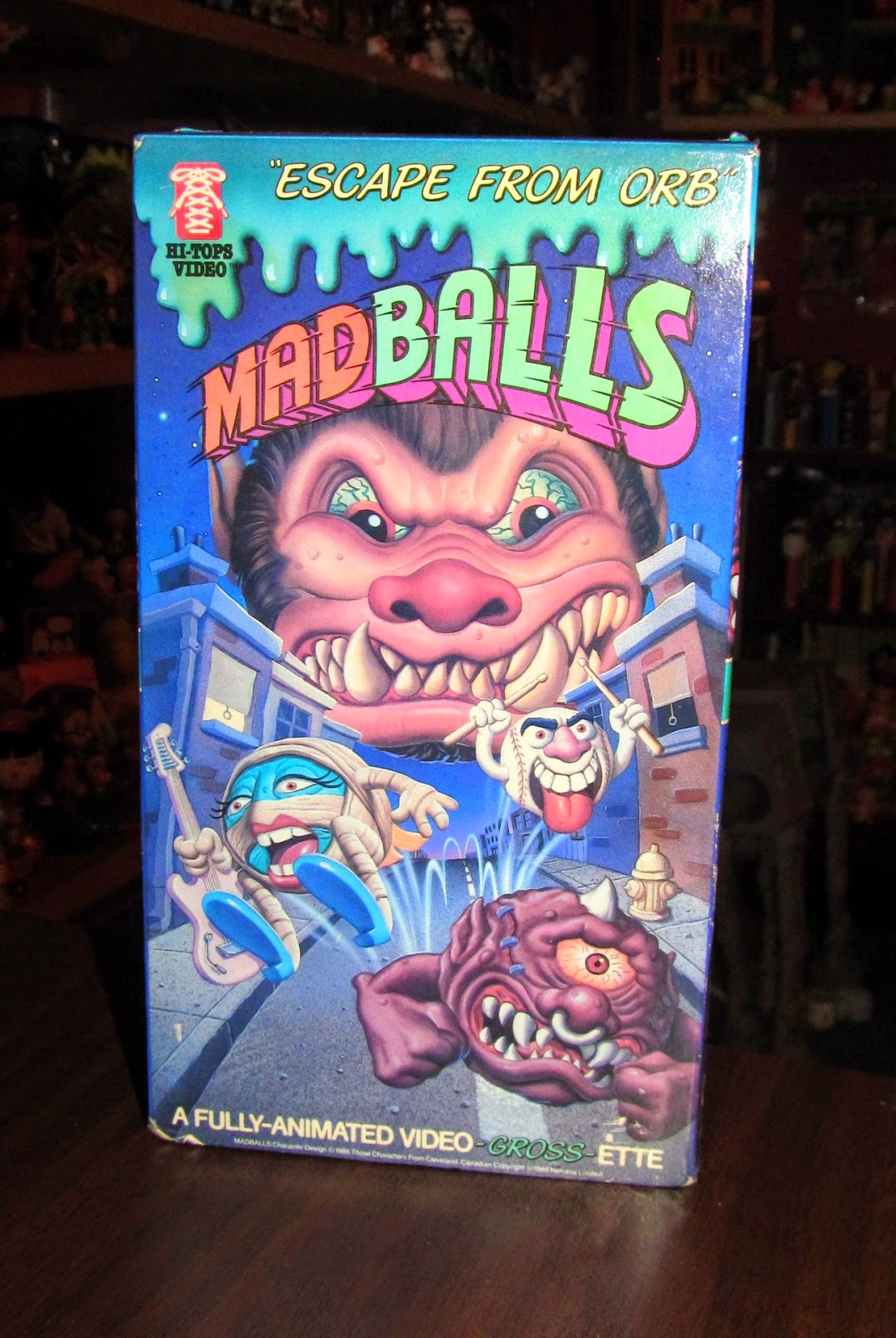 One of the other most surprising items to come out of this package is this VHS tape featuring the Madballs. I don't talk about Madballs enough on this blog, because frankly I find them next to impossible to find around my area nowadays. Madballs were not the most durable toys when I was a kid, and none of mine survived my childhood whatsoever. I have exactly two Madballs in my vast collection at this point, Slobulus and Crackhead. I would rent the video tape you see above from a local rental place obsessively as a child, as well as its sister-tape Madballs: Gross Jokes. I think they were collectively to be the beginnings of some sort of Saturday morning cartoon that simply never took off. 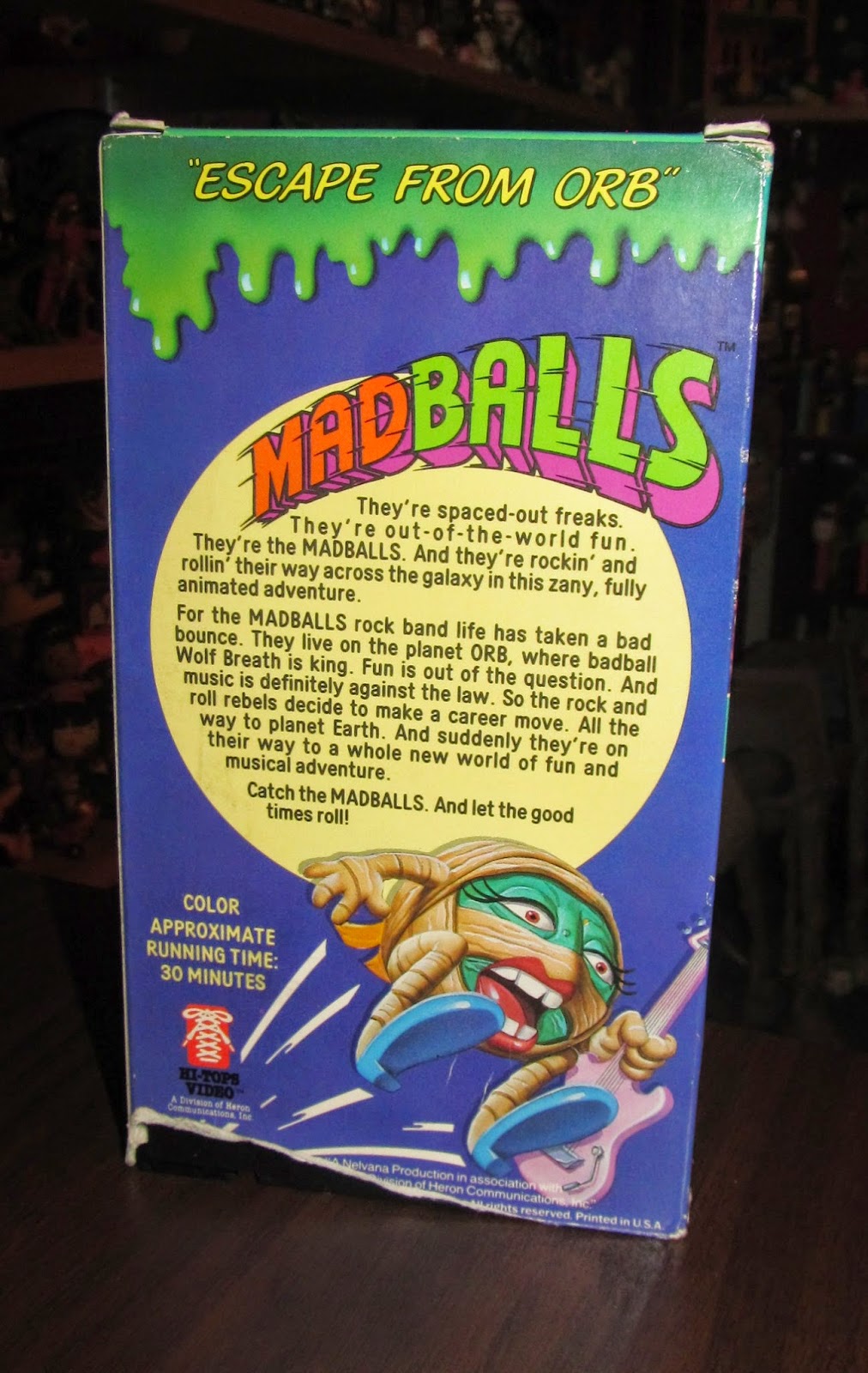 It was interesting in that it took place in a dystopian world inhabited by ball-shaped organisms (and by interesting I mean "bizarre"). The world was ruled by the evil "Badballs" (all of the second-wave-released characters, led by Wolfbreath who was heart-breakingly one of my favorite Madballs, and VERY hard to watch acting evil) and there was a resistance building to escape the oppressive world led by the good Madballs (all of the first-wave-released characters led by Screamin' Meemie) who just wanted to have fun, which was illegal on their home planet of ORB. Ah the 80's. 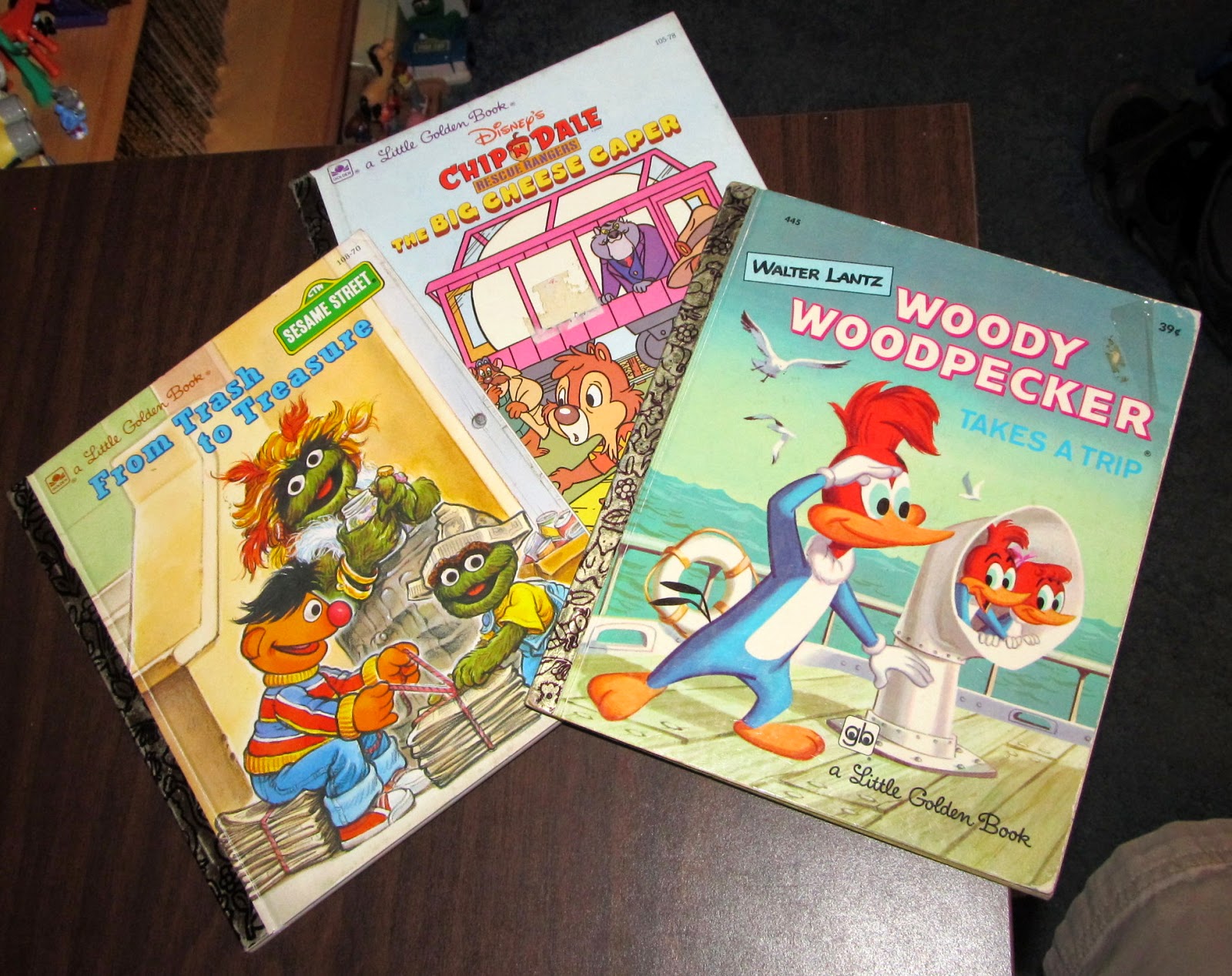 If anything sums up a package received in the mail from The Trash Man better than the phrase: "From Trash to Treasure" better... I can't think of one. So the title of the first of three Little Golden Books that Brian included in the package is more than fitting. I am of course a rabid collector of Little Golden Books which is either endearing or creepy depending on who's reading this. In the pile is a book starring one of my favorite Disney Afternoon properties: Chip n' Dale's Rescue Rangers! The Big Cheese Caper. And a Woody the Woodpecker Takes a Trip which stars the main character and his obligatory child-versions of himself that are named Knothead and Splinter. 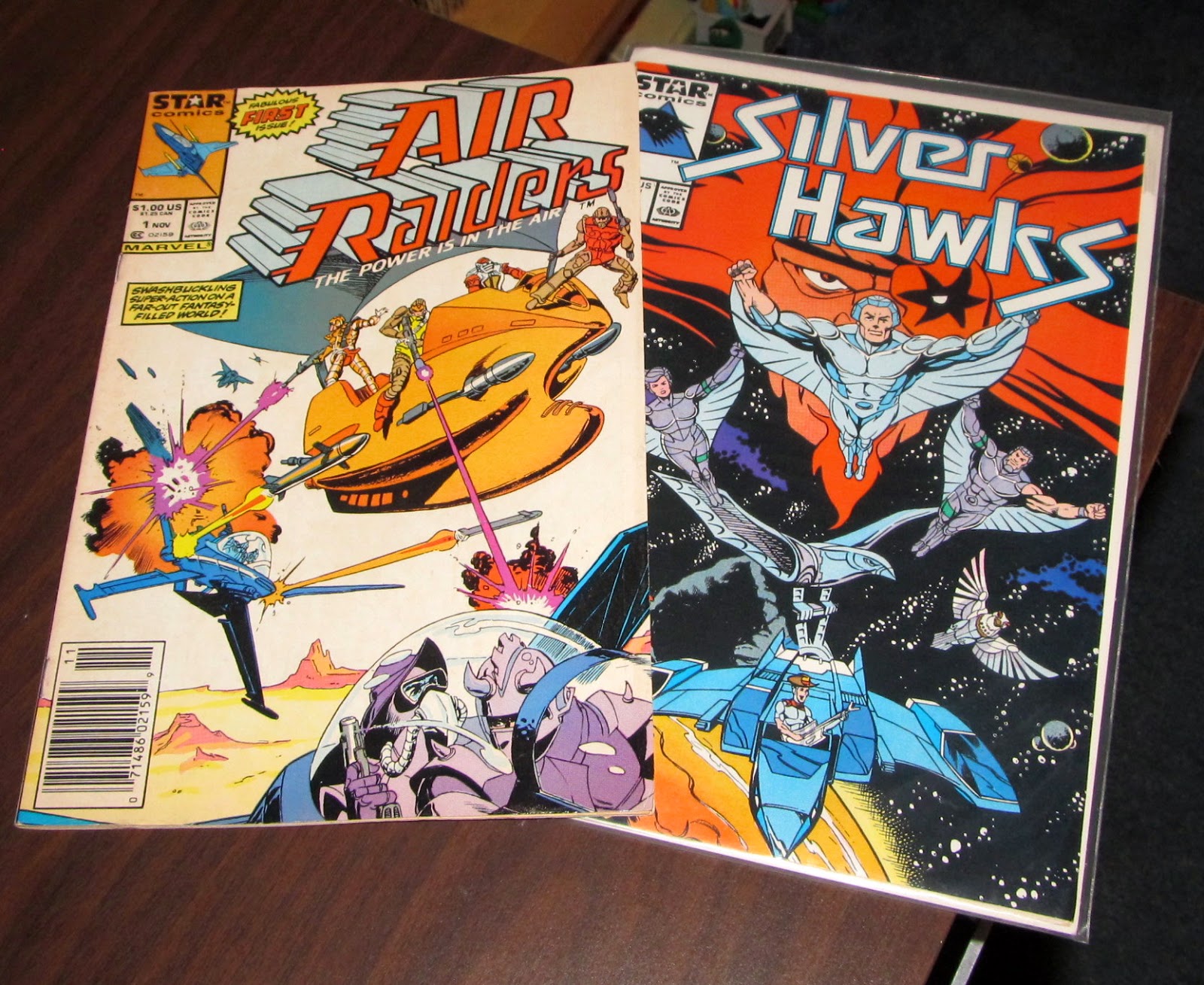 Also included in the package were some comic book treats! Marvel's STAR imprint was always good for some toy-licensing fun, and here we see Air-Raiders and Silver Hawks representing! Brian of course knows from this blog how much I love my Air-Raiders figure that I salvaged from childhood:


I never played with him properly, calling him "Vocal Chord" instead of the much more accurate and unwieldy: Tyrants of the Wind Soldier. 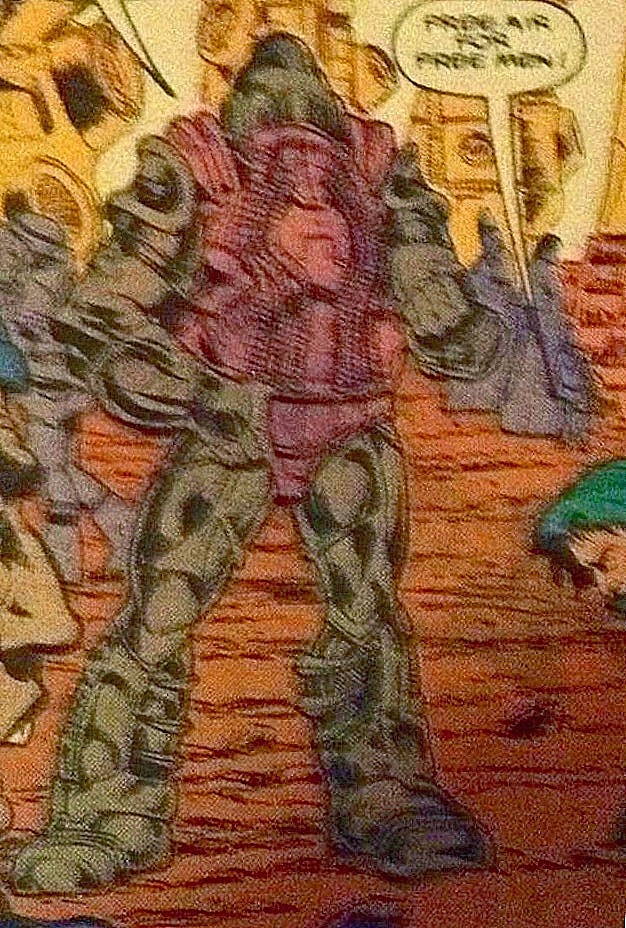 And the comic book includes this KICK-@$$ picture of "Vocal Chord" in all his glory! This sight gave me LITERAL goosebumps. 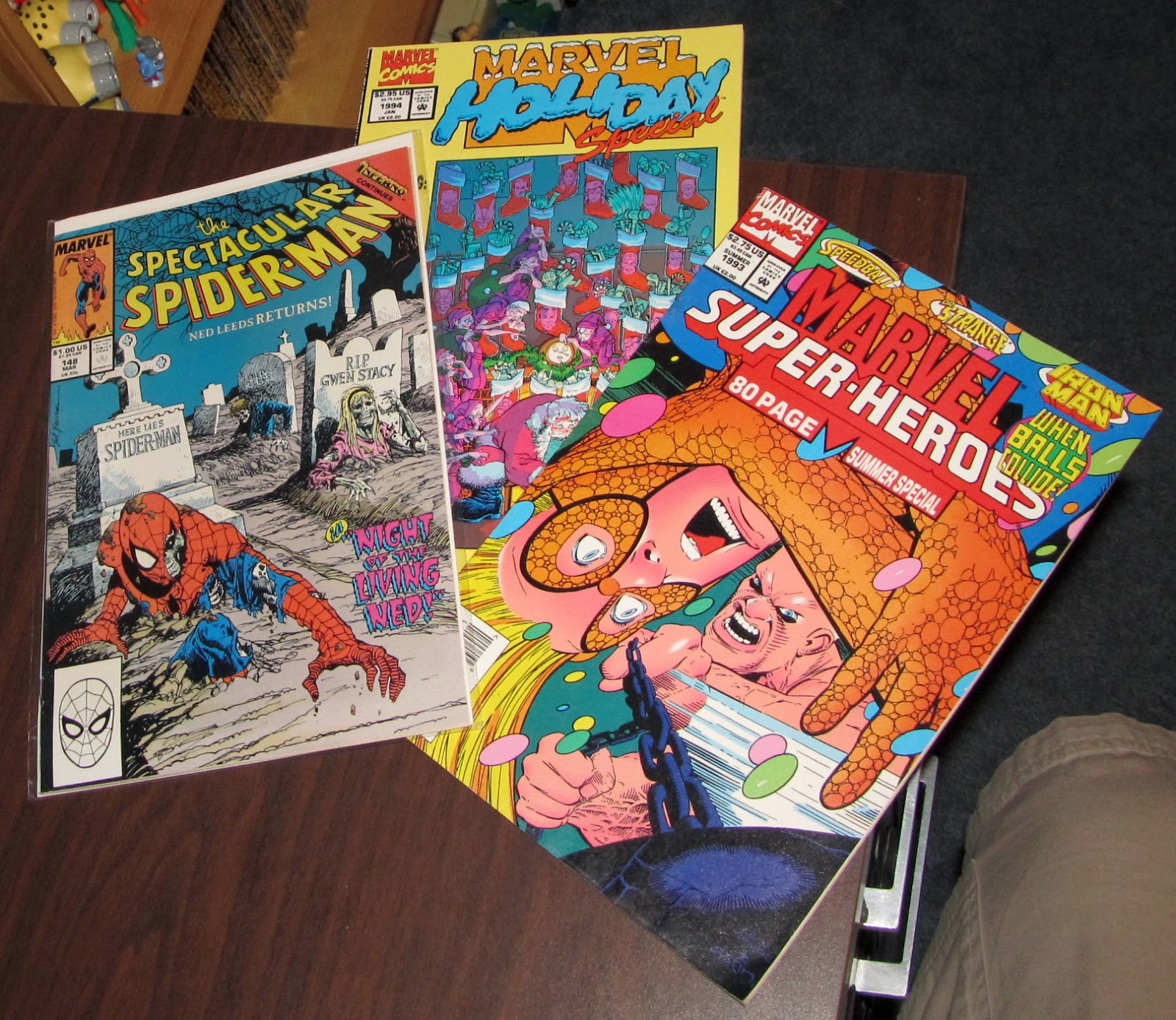 There's nothing not-awesome about these three issues as well. We have an Inferno tie-in that I actually don't own yet, a Marvel Holiday Special (LOVE the Holiday specials from back in the day!) and a Marvel Super-Heroes Super Heroes Summer Special with the tagline: When Balls Collide!!! That right there is worth the price of admission. 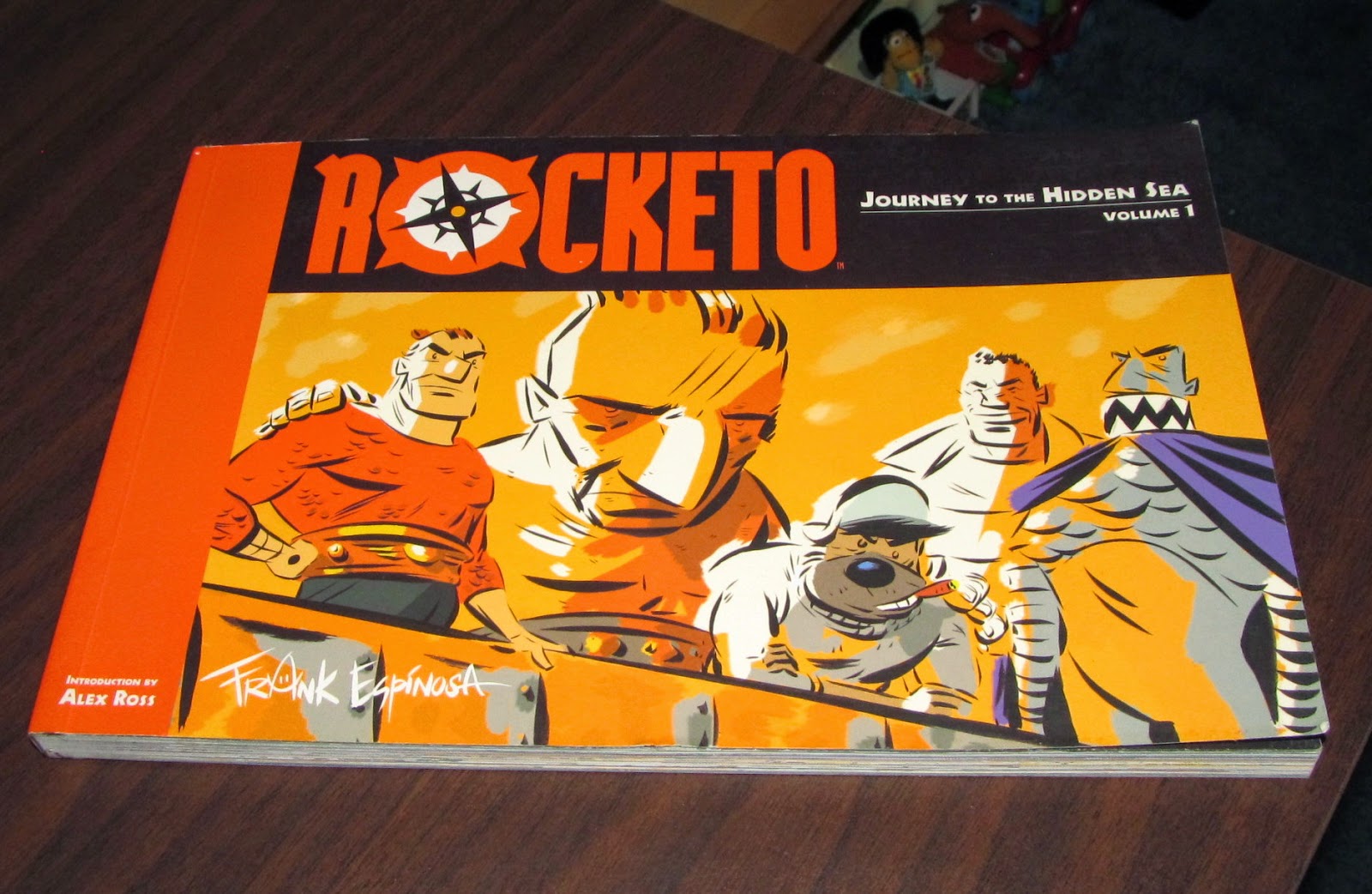 Brian also included this TPB of Rocketo which is a comic I have always been curious about, but too lazy to track down on my own. So now I can finally check it out! It looks amazing. 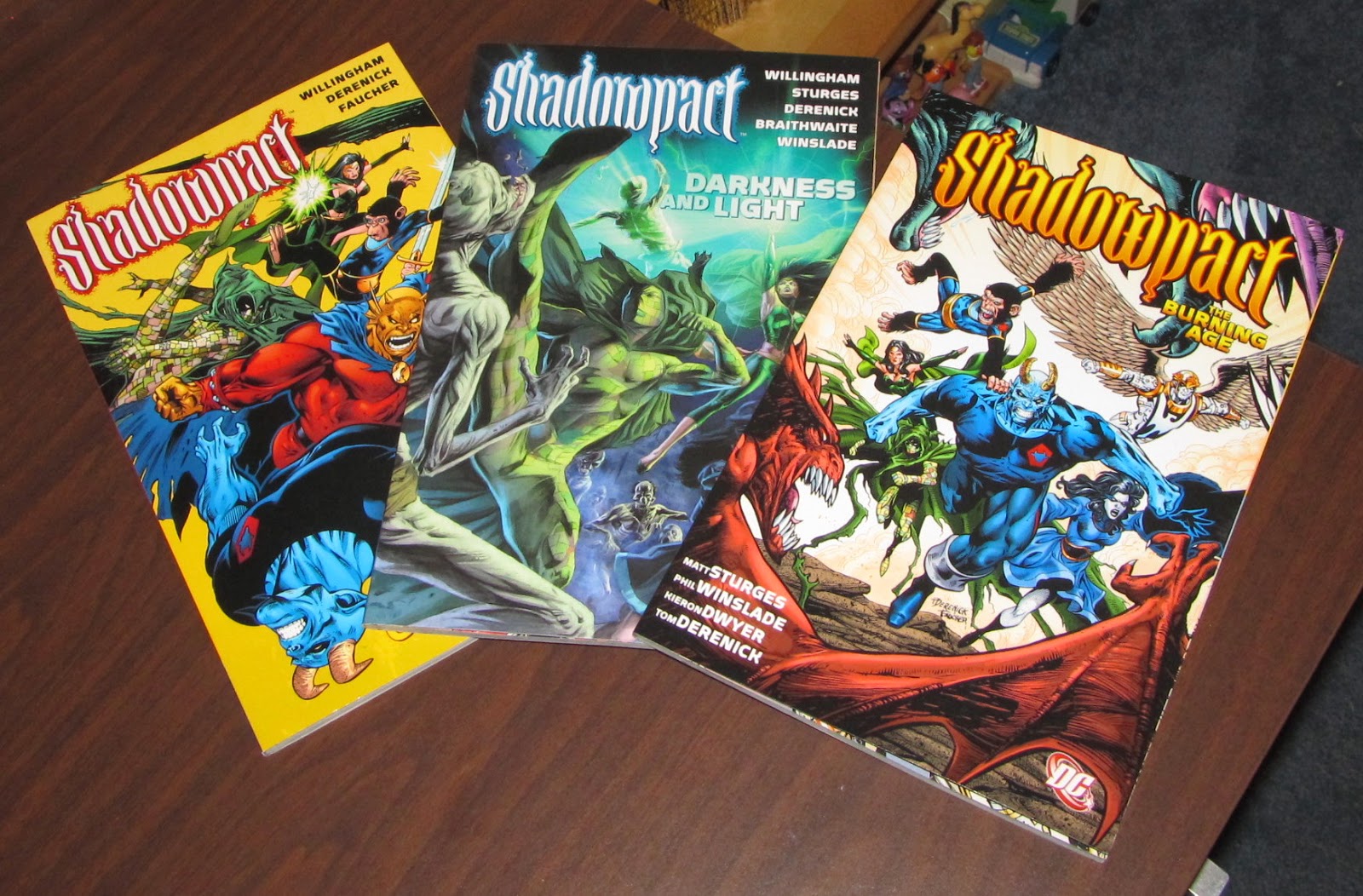 And when I had heard that he was getting rid of his Shadowpact trades due to the evil, Evil, EVIL minimalist game... I stuck my hand up in the air and said "mememememe!!!" because I liked the team back when they were introduced. These stories are of... mixed quality, and I can see why Brian had decided he no longer needed them in his collection. But I ASKED for them, remember. It was incredibly gracious of him to acquiesce. 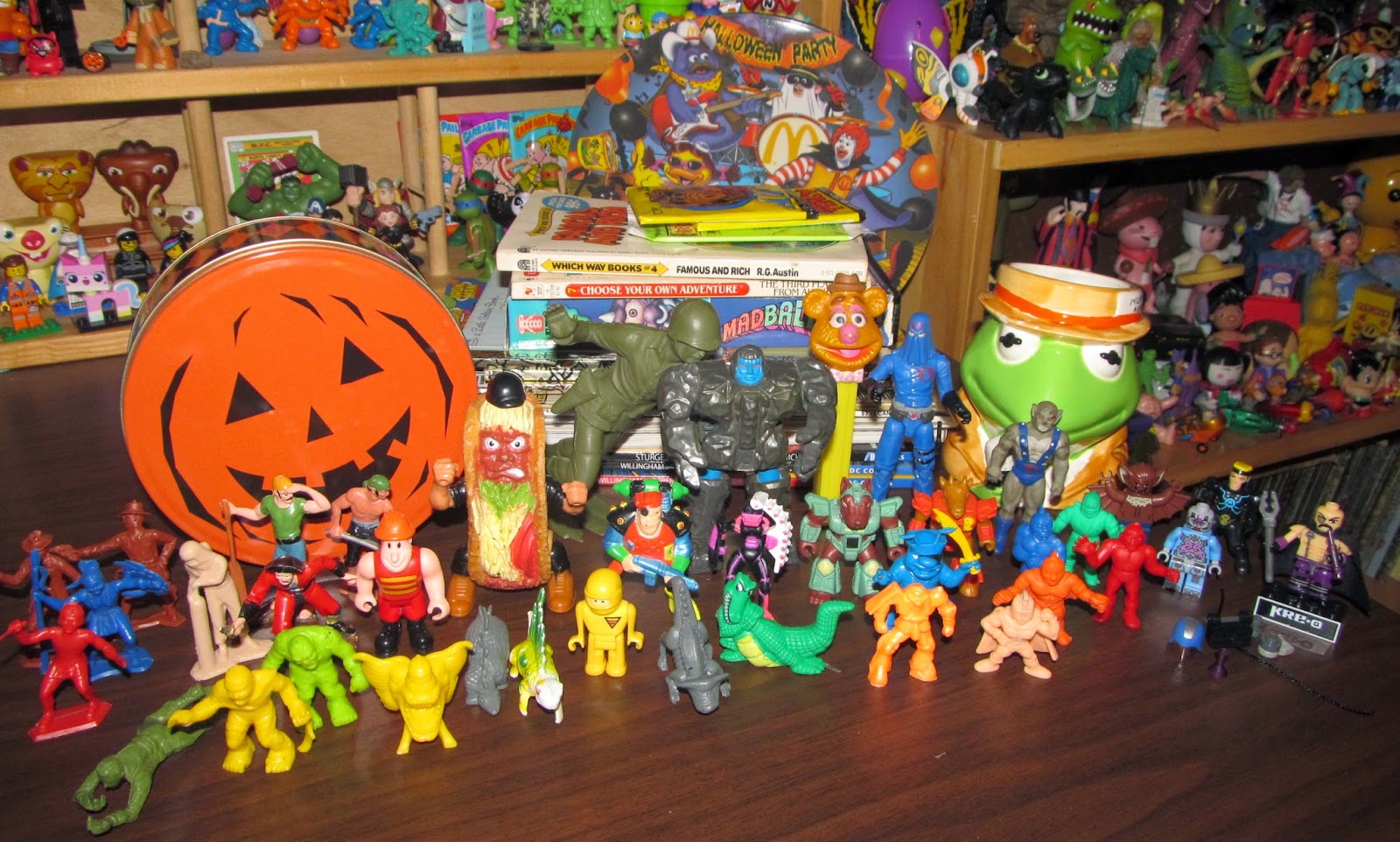 So there you have it kids! The contents of a package from Brian "The Trash Man" Farrell, of Pop Pop! It's Trash Culture fame! That's all I've got for tonight. I'll be back soon with more Gross Goodwill Goodies! Until then, Happy Haunting!
Posted by Derek Ash at 5:19 PM