October first is finally here!!! And with it, the Countdown to Halloween!!! So welcome dear readers, to the time of year I adore the most. Below I have a handful of Halloween goodies I brought home from Goodwill (along with some decidedly UN-Halloween-y things... but they're all at the end) recently! 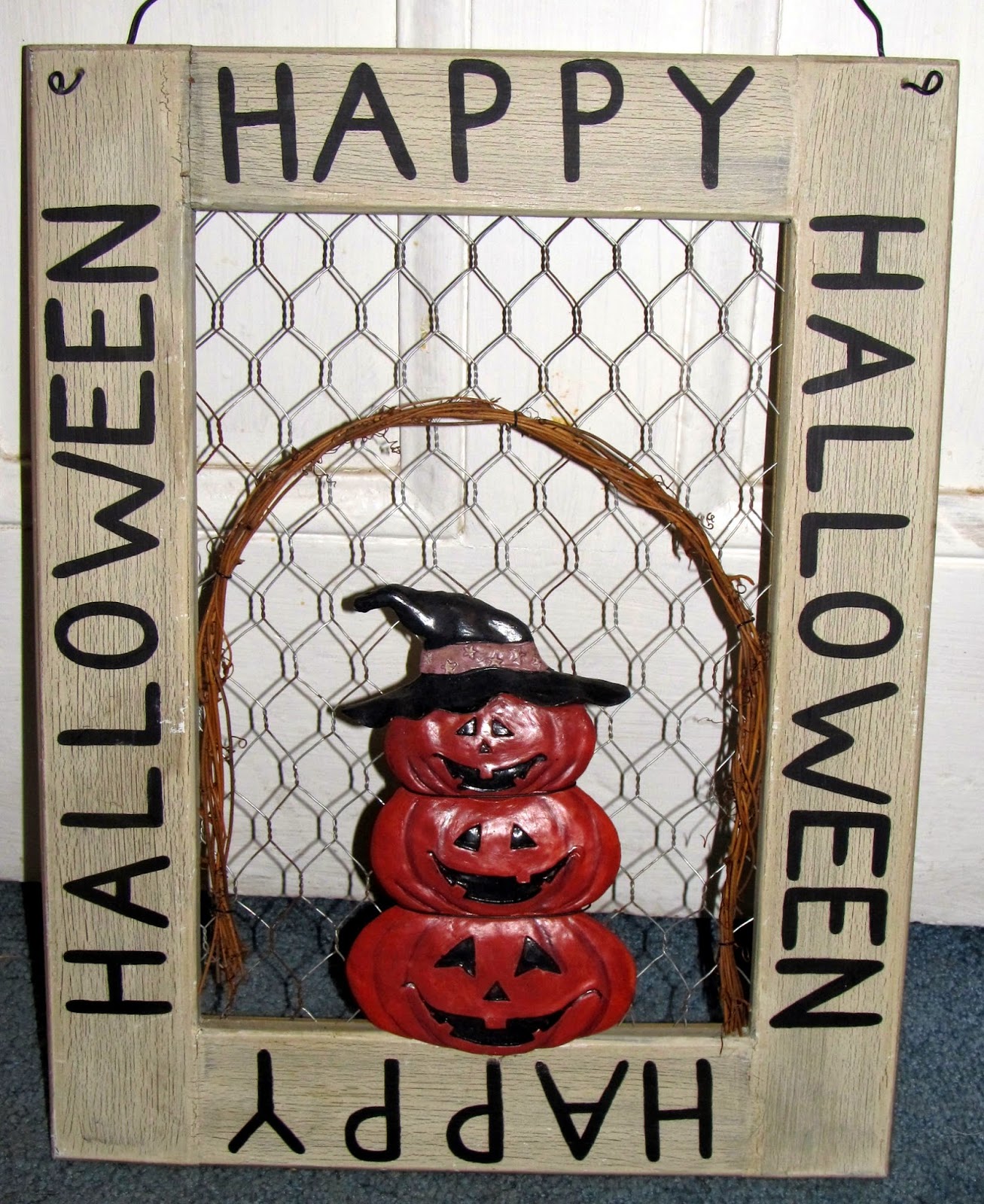 My wife does not often join me in Goodwill. She finds my obsession with other people's secondhand stuff less charming than most of my blog readers. But on the occasions when she does join me, she often finds some really fun stuff! On a recent trip with the entire family in attendance, my wife picked up this rustic little piece of Halloween heaven. This now hangs next to our front door out on the porch.

During the same trip I found this groovy version of everyone's favorite murderoue pastime: CLUE!!! As one of my favorite 80's movies, and one of maybe two distinct boardgames dealing with murder in an old mansion, CLUE is one of my favorites. It's one I actually enjoy playing from time to time as well. 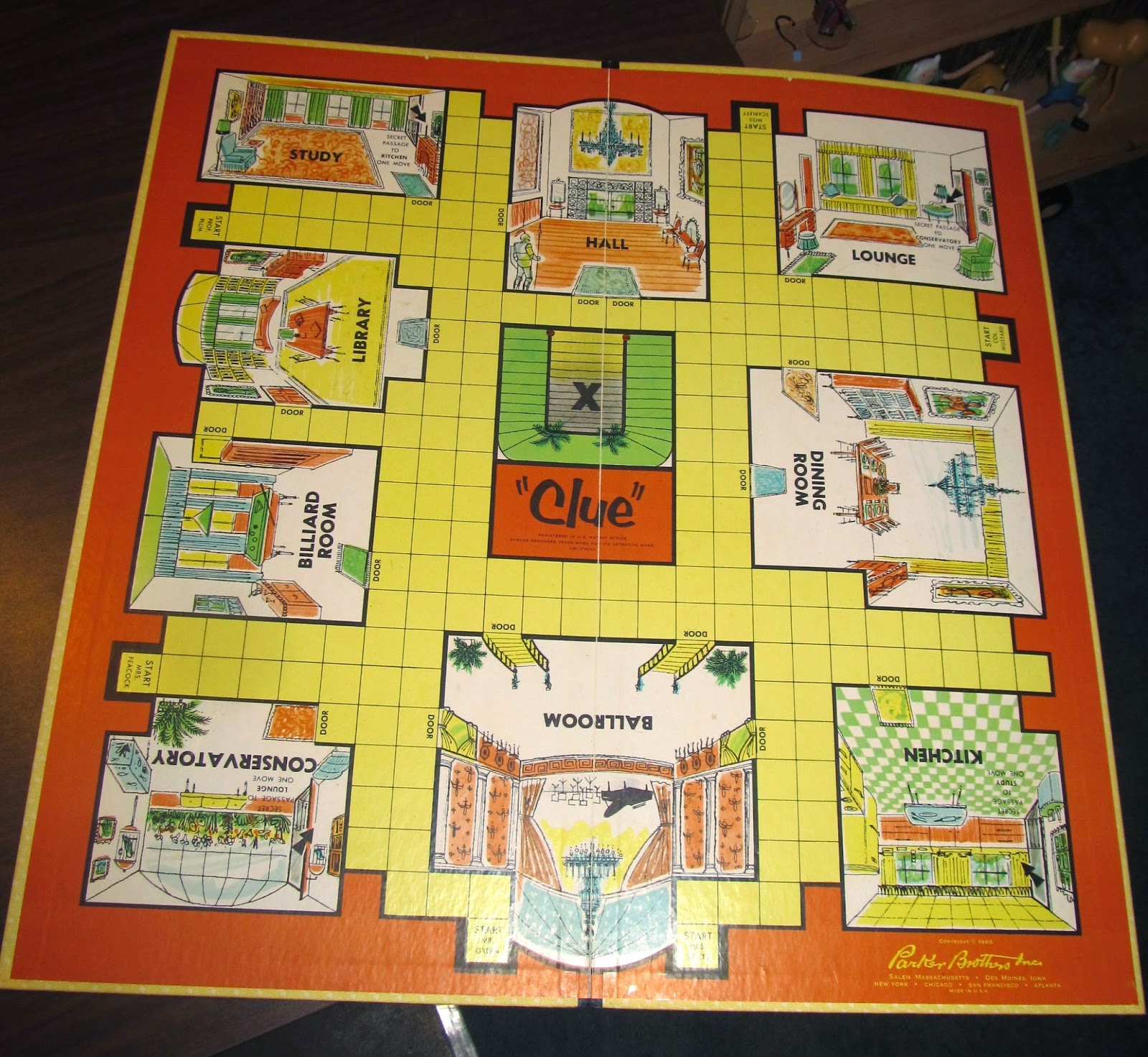 Love this burnt orange background for the boardgame, and the illustrations for each of the rooms. 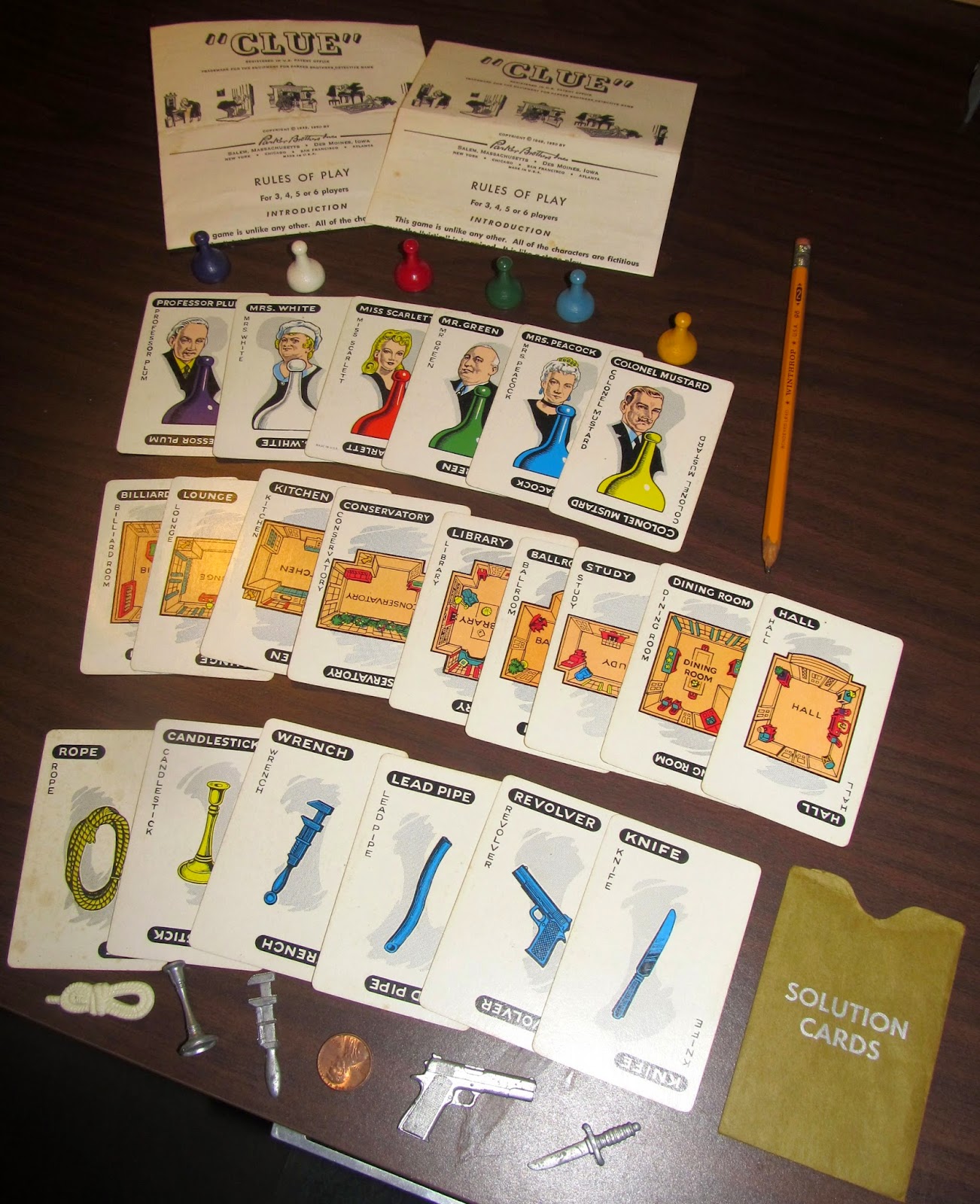 Which honestly leads me to wonder if these are the cards that even go with this game. a quick google search reveals that they are indeed NOT the cards originally included in this game... but look how cute those little potential murderers all look up there, lined up in a row! I actually would have framed the set of cards had they been this charming. Oh well. I still love the box. 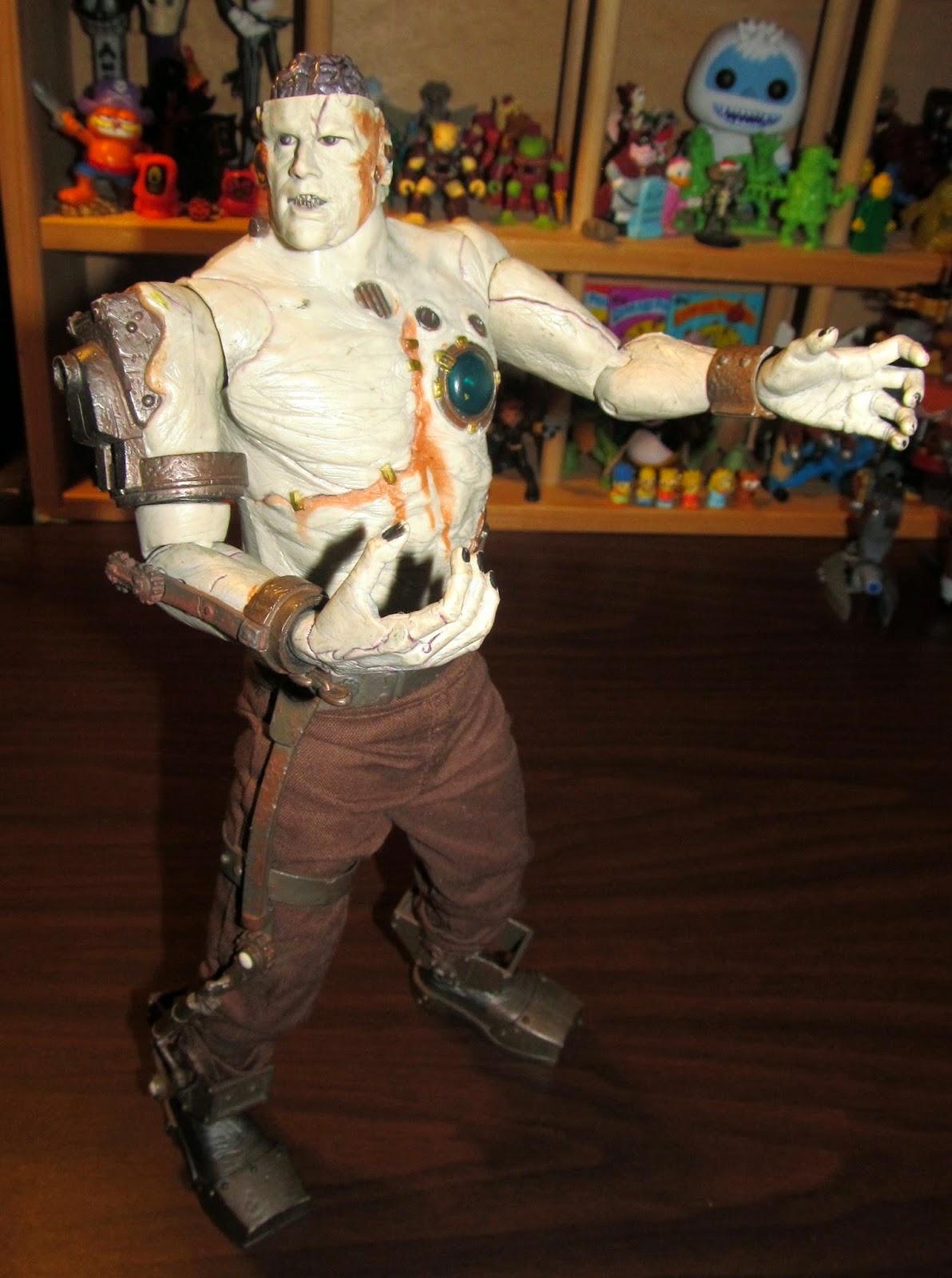 This grisly fellow is meant to be a 12" reproduction of the Frankenstein's monster from the 2004 Van Helsing film... which I did not like. But when I found this toy for .99 cents... I fell in love. He looks downright gruesome! I like his arm, the mechanism driven into his chest (it still lights up sporadically) and his huge metal boots. I even like his exposed brain (which I assume is missing whatever was used to cover it up originally). I will promptly scrub any prior knowledge from my mind of the film, and display this guy with a bunch of my other monster toys.

Next up is this trio of Halloween-themed books. First up we have Beverly Cleary's Ramona and her Father which I may have referenced in the past as a series of books I've been trying to track down for my wife. Halloween actually plays a prominent role in this book, for a few chapters at least, as you can see on the cover. Then we have Halloween Fun: 101 Ways to Have a Safe and Fun Halloween which is not as snooze-inducing as it sounds. It's a pretty fun little craft book for someone with two little boys. There are lots of fun ideas for creepy little crafts and games to play to ring in the Halloween Season. Finally we have Pebbles and Bamm-Bamm and the Wicked Witch which is something I picked out for a friend, as I am not the hugest Flintsones fan myself. 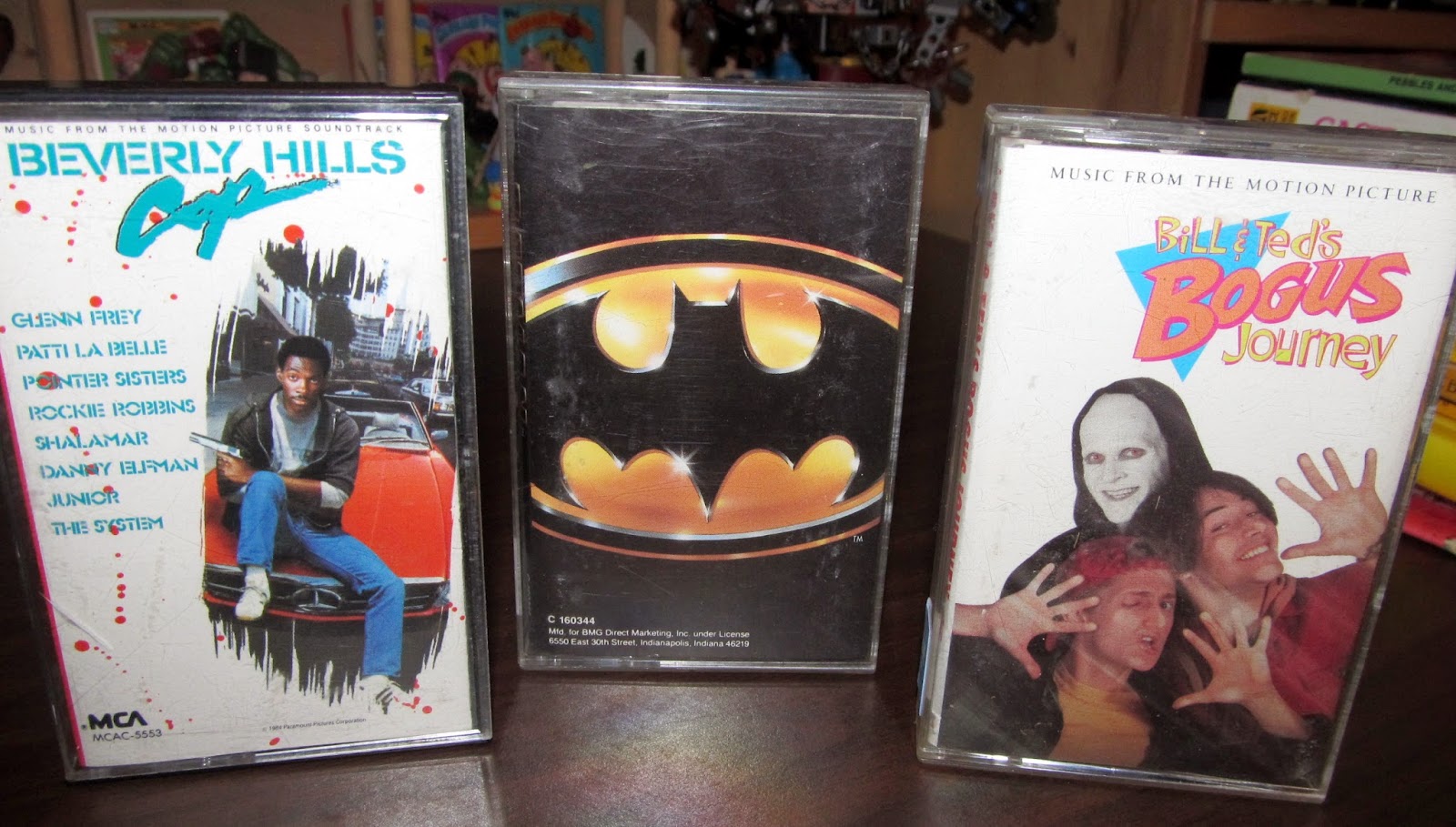 Here we start drifting further out from the Halloween theme. But I still can't wait to talk about my newest obsession: Collecting audio cassettes! I'm mainly focusing on movie soundtracks right now, but I'm also snapping up some other stuff too. I definitely blame the Awesome Mix from Guardians of the Galaxy for getting me back into cassettes. I've never really understood the impetus for collecting VHS tapes or even vinyl records for that matter... but suddenly I have these tangible objects that bring me back to some of my happiest memories in high school. 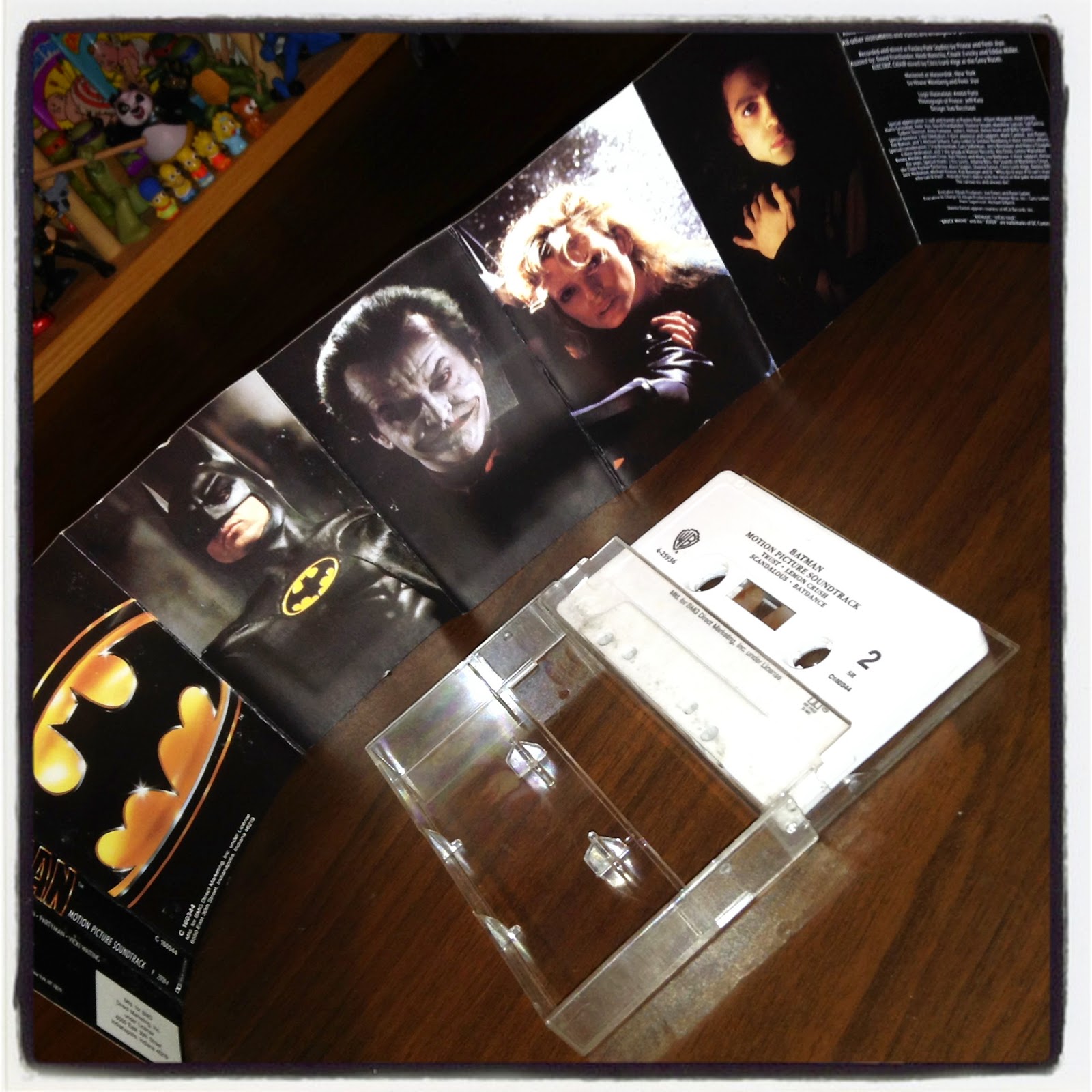 Of course High School included arguably some of the happiest and unhappiest days of my life, but most of the happiest days involved music and boy howdy I loved making mix-tapes back then. As someone who lived in a gutted out liquor store as a teenager, and slept on a dilapidated loveseat in a closet with a floor that flooded and froze over every winter (I laugh at you Harry Potter)... the pure gold that was a blank cassette tape that I could then fill up with songs and was magical. 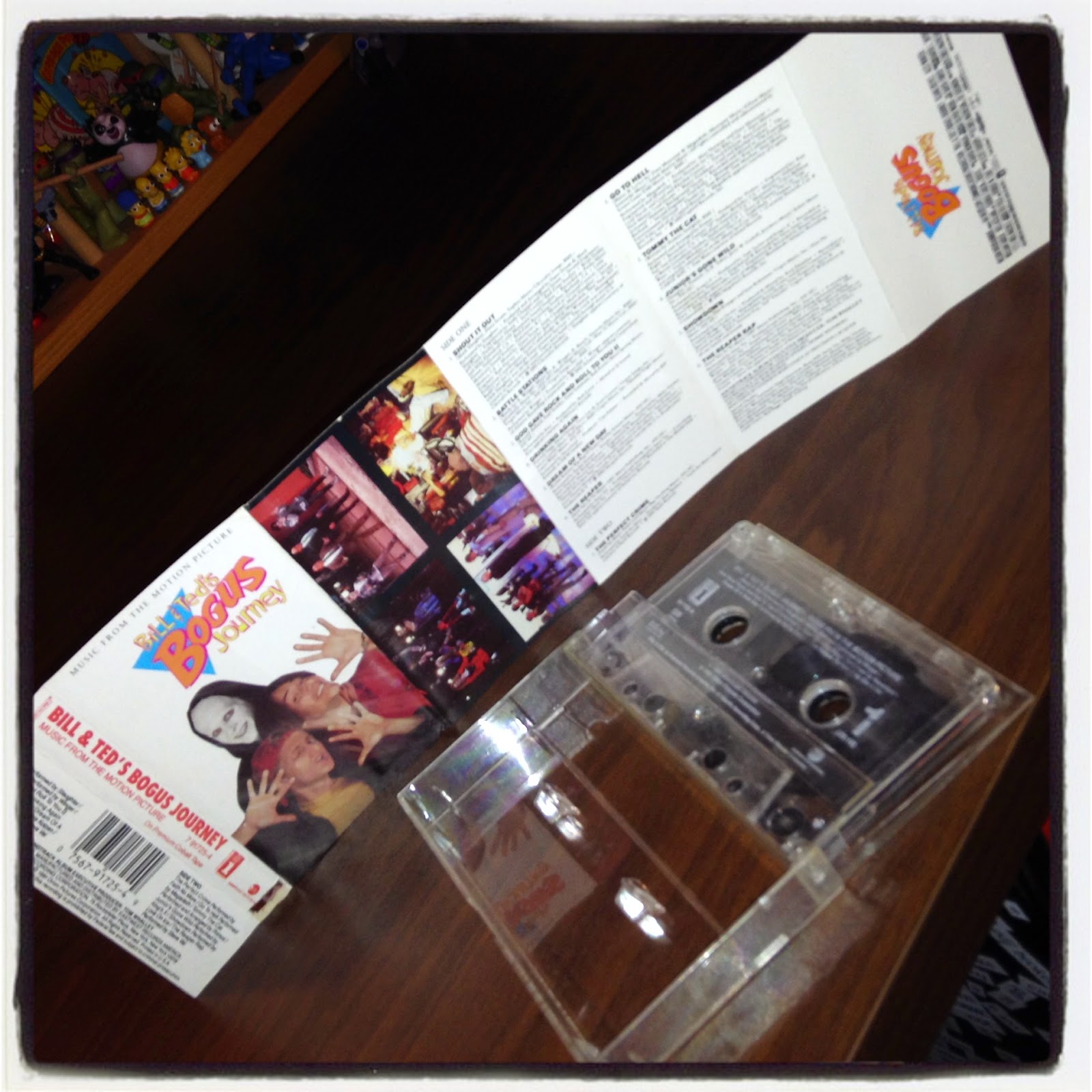 I would make mix tapes for my closest friends as they were pretty much the only gifts I could afford to give back then. My Aunt who spoiled me with action figures as a kid began spoiling me with cassette tapes and a decent tape-to-tape recorder. I also had friends who had CD-to-tape recording capabilities, so I would scab their music all the time. ANYWAY. I'm collecting audio cassettes now. 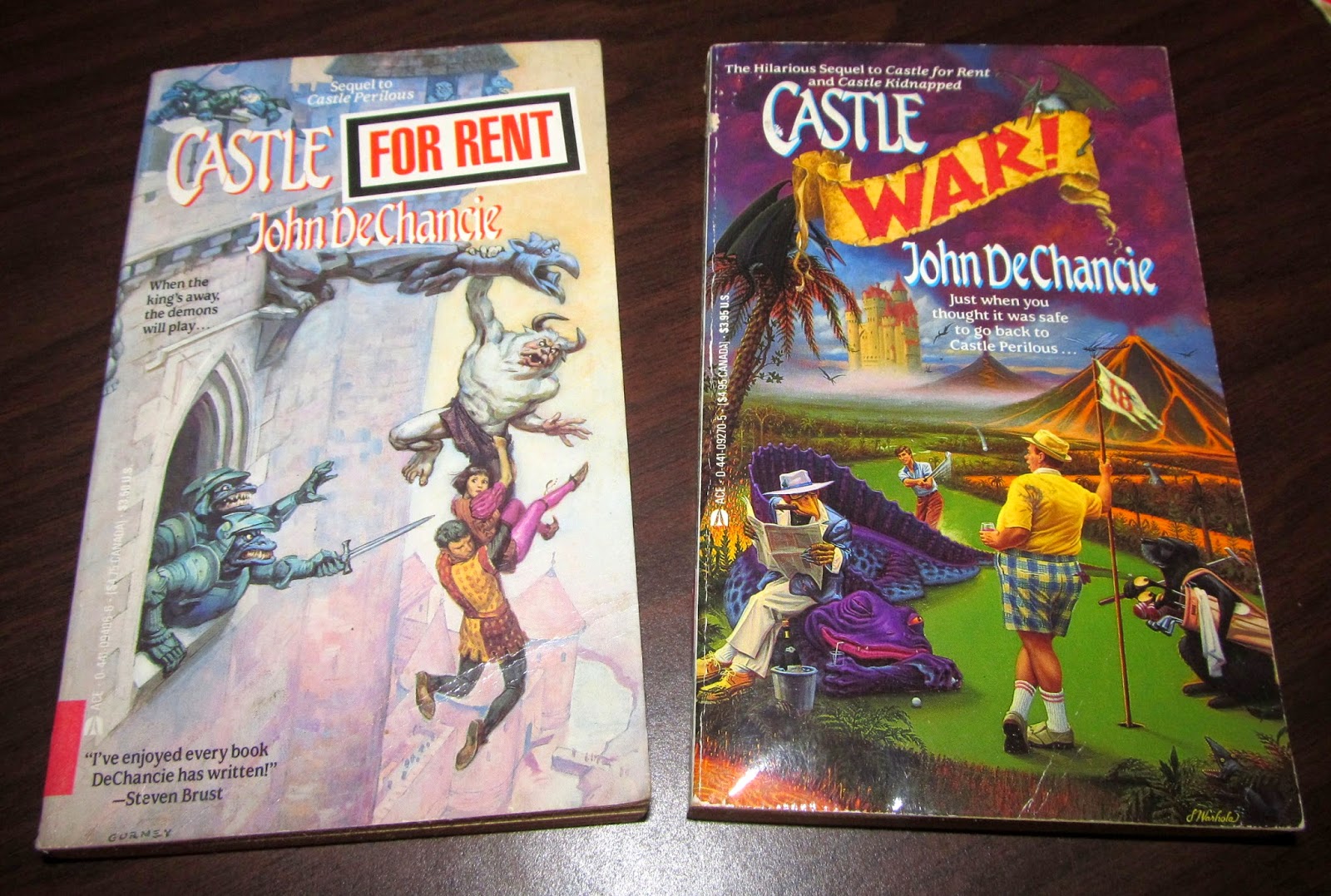 I discovered the book Castle Perilous easily fifteen or more years ago. It is one of my all time favorite comfort-food books. It takes place in an interdimensional castle that plucks people and creatures and other... things from all over the multiverse. Sometimes folks wander the halls and end up on jungle planets or being chased by angry french swordsmen. It's facets are endless, and the Guests are outrageous. After I discovered the first book in the series and fell in love, I discovered more in the series. Up until a few years ago I had despaired at ever finding these two particular books right here: the 2nd and 4th books in the series. Castle for Rent and Castle War! I highly recommend the series to anyone who likes books like Neil Gaiman's Neverwhere where absurdities rule and literally anything can happen. 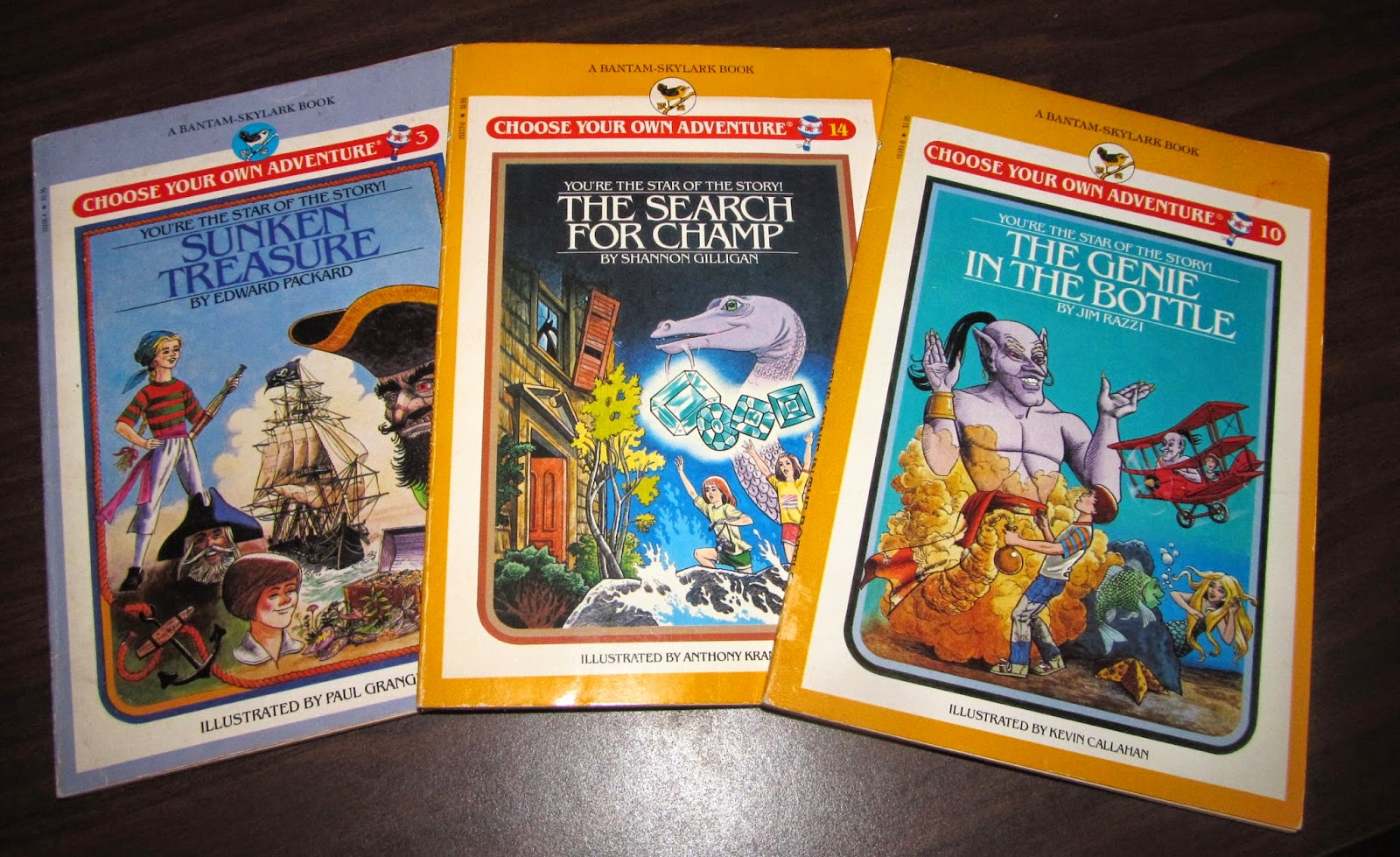 A bevy of young-reader Choose Your Own Adventure books! These are all semi-Halloween appropriate, including Pirates, lake monsters, and genies. 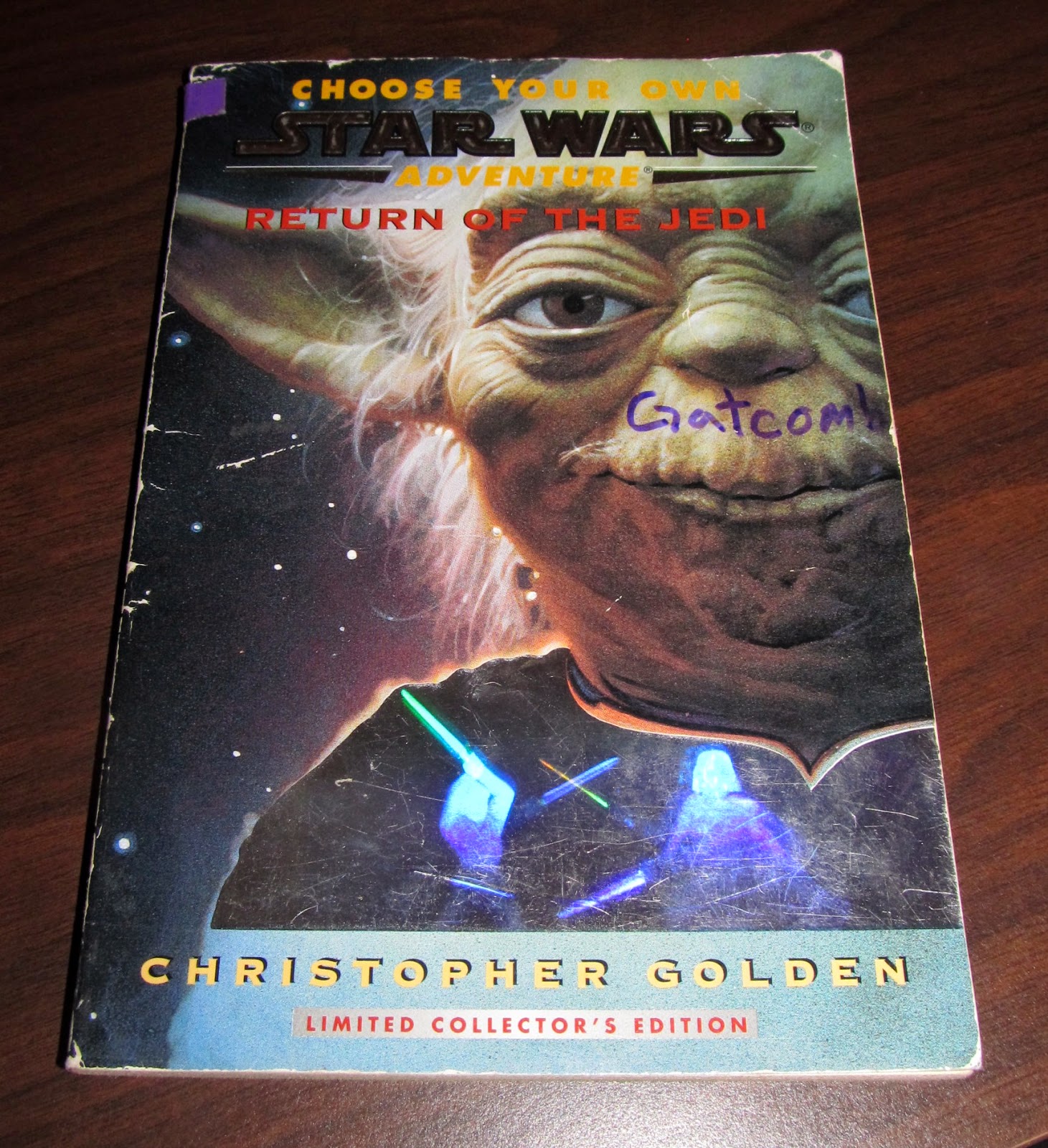 They also apparently put out a Choose Your Own Adventure series involving the Star Wars books. How that works I'm not entirely sure. Maybe Darth Vader doesn't die in one of the endings? Maybe he tells Luke "Psyche! I ain't the baby daddy!" I don't know. But I aim to find out. 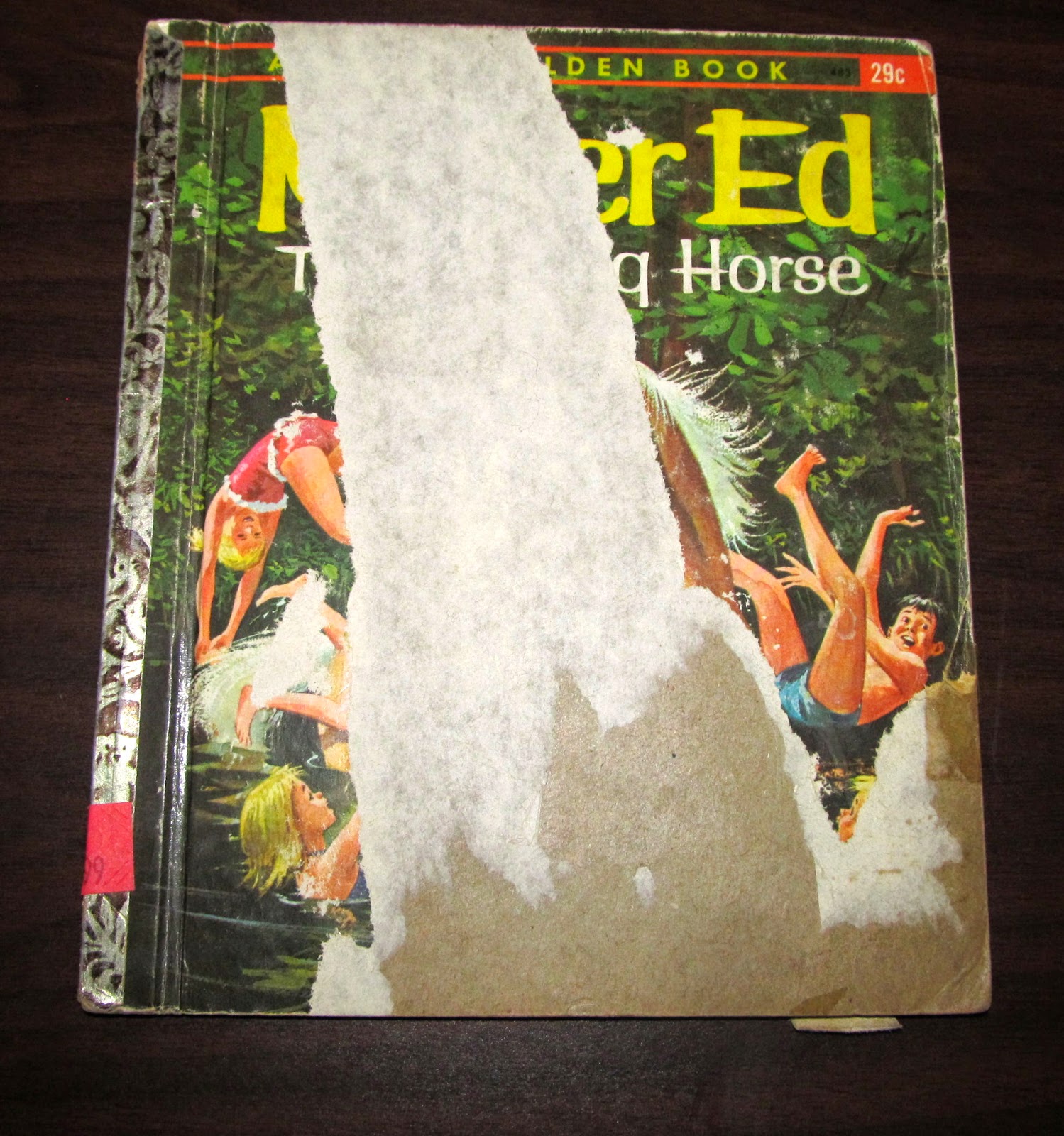 In a genuinely tragic turn, I found this Mr. Ed the Talking Horse Little Golden book that had the cover completely demolished. I still picked it up. Because MR. ED HAS A LITTLE GOLDEN BOOK!!! 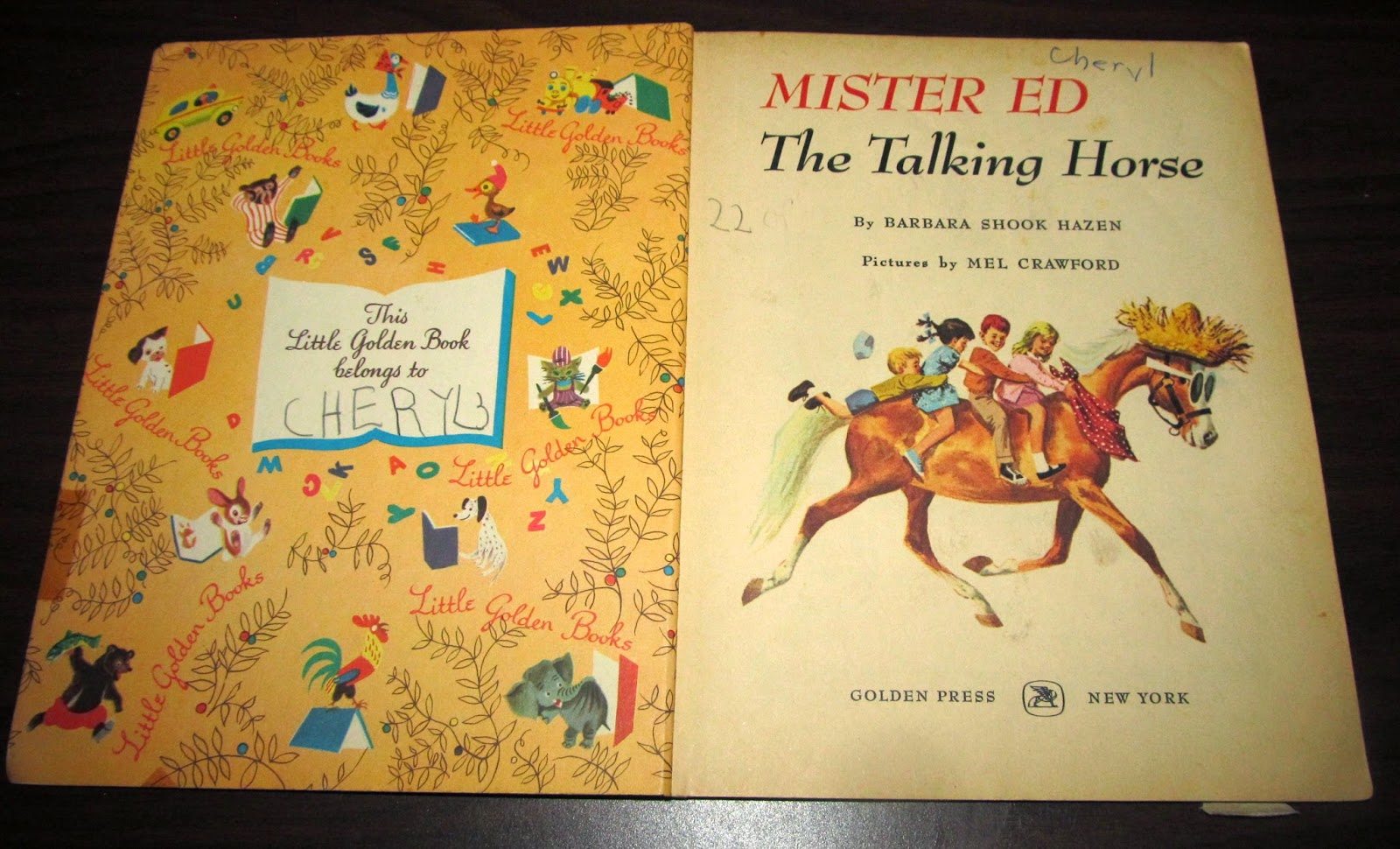 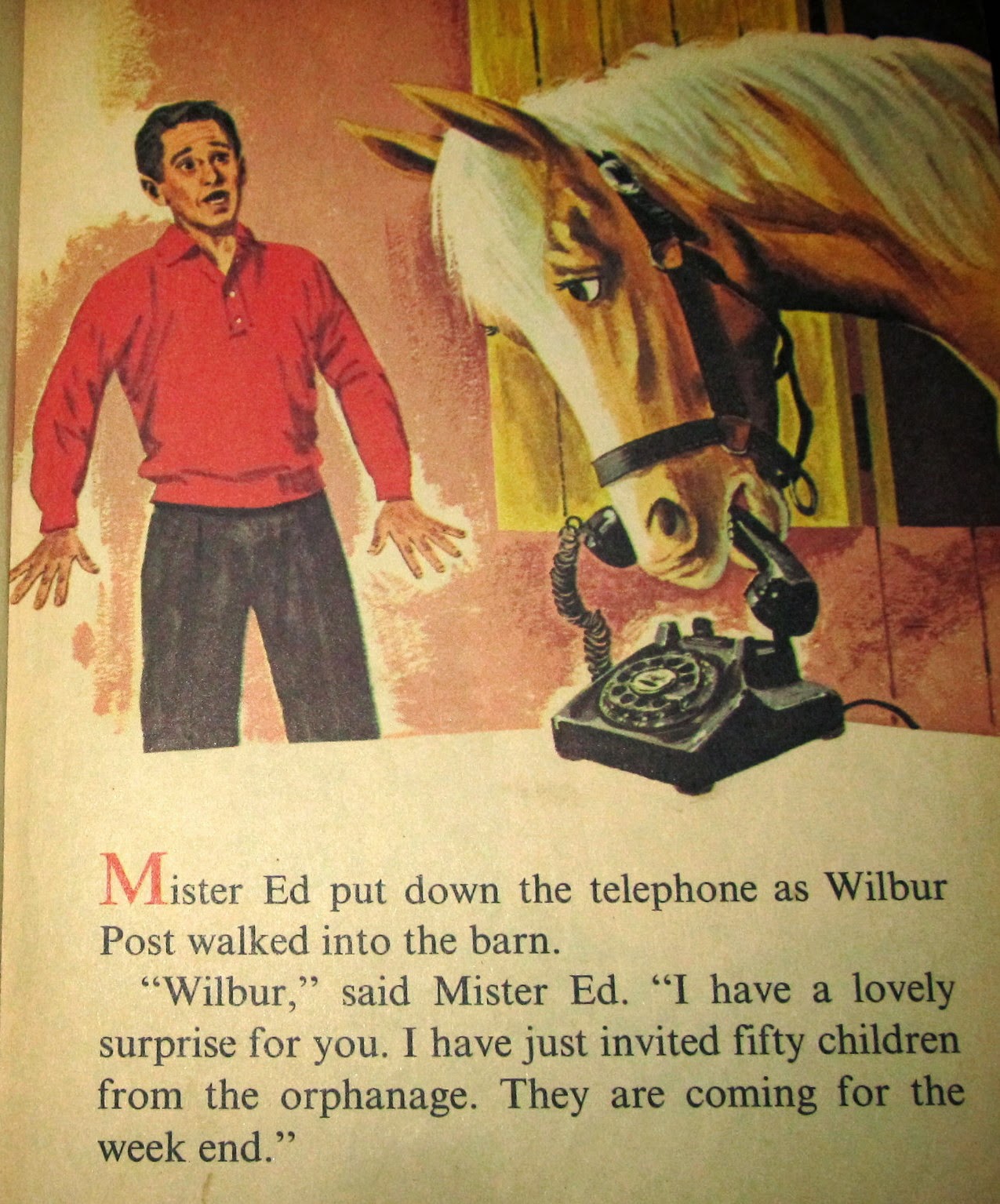 I used to watch the S#!T out of Mr. Ed on Nick at Nite back in the day. Crazy. And now I own the book. 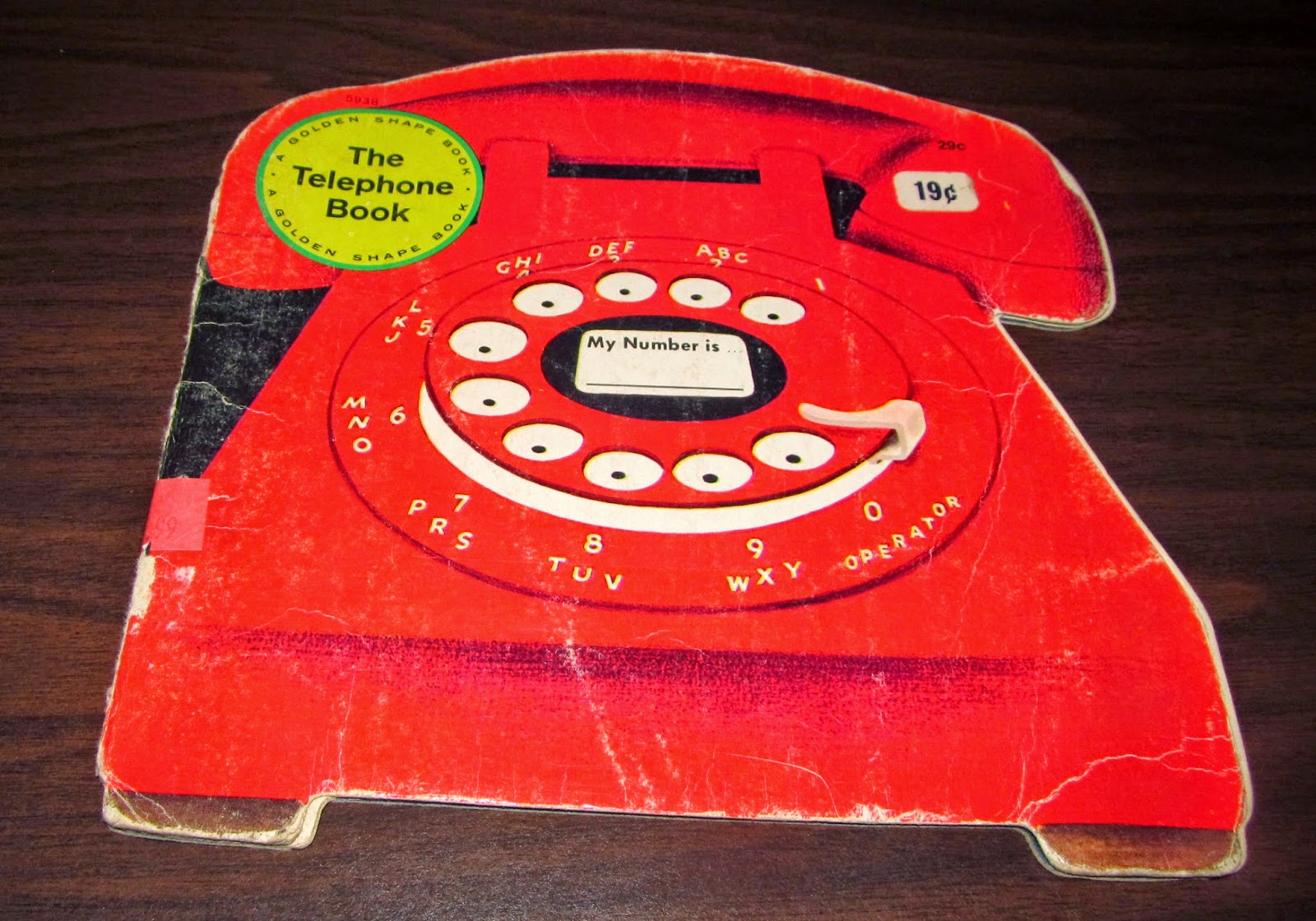 And finally, in what could be described the CREEPIEST of the Halloween-iest items in this post... is a disturbing time capsule detailing the life of people who lived before smart-phones. Look at all of the abominable mechanical devices they needed to listen to music, watch shows, take pictures, and write stuff!!! Eegads that's horrific (just let me have this okay?)!!!

So that's it for tonight kiddies! I'll be back tomorrow with more Ghastly Goodwill Goodies!!! Until then, Happy Haunting!
Posted by Derek Ash at 5:04 PM