Another Trip to the Brewer ME Goodwill

So, my usual stomping grounds are contained within the Ellsworth, Maine Goodwill. I'm there usually once a week at the very least. But occasionally I get to range out to one of the other Goodwills within about an hour's drive from my home and I almost always find some good stuff on these field trips.

So on Friday, when we took our kids to an indoor bounce-house fun-tertainment facility called "The Maine Jump" in Bangor, I managed to squeeze a quick trip to the Brewer Goodwill, which is on the way. (We went to the Bangor store on Sunday, but I'll post more on that trip another day).

My trip to Brewer did not disappoint. Since there are ALWAYS BOOKS I'll start with those:


First up, a couple of Little Golden Books. I picked up The Golden Egg Book because I am always on the hunt for Holiday books for my kids (and it was a nice way to fluff out my LGB collection). I don't even really think it's that old of a book. But Holiday books usually get into the club, old or not. By far the coolest of the duo is Muppet Treasure Island which is exactly what it seems to be: an adaptation of the movie. I am apparently turning into a full-blown Little Golden Books fiend. More on this at another date. Both of these books cost me .99 cents.


Next up I found the novelization of the 1989 Tim Burton Batman film. I owned this book back then, and seeing it made me deliriously happy. I can't even tell you how much nostalgia this brings back. Even just flipping through to look at the chapter headers brought back memories. If I'd found a cassette of the soundtrack to go along with it I might have needed to excuse myself to the bathroom. This book was .99 cents.

I think the book that had me the absolute MOST excited was this one however... even with the hallucinogenic properties of the nostalgia bomb from the Batman novelization THIS book just screamed I"M YOUR BOYFRIEND NOW NANCY!!! HAHAHAHA!!! Which meant a lot, even if my name is not Nancy.

That sounded better in my head.

Anyway, once you get past the neon orange and green cover, and the obvious fact that this is "New Nightmare" Freddy (the weird organic bladed glove gives it away)... you slowly begin to realize that they put out a Goosebumps style series of novels that isn't even a hackneyed attempt to simply repurpose the scripts from "Freddy's Nightmares: The Nightmare on Elm Street Series". A quick Google search turned up 5 (!) more books in the series. I'm beginning to think I may need them all. "How's the writing?" you may ask? Well it's not great to be honest, and I flipped to the ending to see if my suspicions were correct... and they were. The pretty much find a tenuous and bizarrely illogical way of tying the story to Freddy Krueger. And that's... okay! He also serves as Crypt-Keeper, introducing the tale, and wrapping things up for us at the end. I paid .99 cents for this kitschy masterpiece. 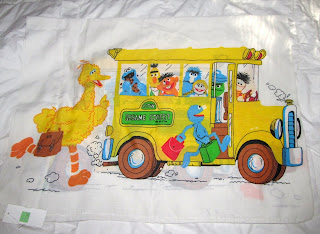 Next up I have this pillowcase featuring Sesame Street. Regular readers of this blog will already know that I am obsessed with Sesame Street. And FYI I pretty much plan on letting my youngest son use this on his bed because I've given him the Sesame Street Fever. This one was a last minute purchase because the woman in line in front of me actually had it in her cart and she changed her mind and handed it to the cashier to return. I asked if I could see it, and immediately added it to my pile for another .99 cents. Why?

Because Roosevelt Franklin. See that kid driving the bus? That's this muppet:

I. Love. Roosevelt Franklin. He stopped making regular appearances on Sesame Street 3 years before I was born but he still made occasional appearances and they still showed some of his sketches later. The more I learn about him later in life, the more I want to see him come back.

He was intended to be a role-model for young black inner city kids. Unfortunately some critics of the character either felt he was an insultingly over-the-top negative racial stereotype, while others felt he was too "white-washed" and watered down to truly represent kids of color. Personally I think it's a shame that an effort to make a black character to help empower black kids got stomped out by a bunch of critics. And wow... I spent waaay too much time talking about this pillowcase. Basically it boils down this way: If it's got Roosevelt Franklin in or on it, I'm buying it.

Sharp Tooth! I picked up this old Pizza Hut puppet from The Land Before Time for .99 cents. Remember these? I took two pictures because I wanted one that really showcase the puppet (the one on the right) but then I had one shot I took completely by accident that I felt really made his menace come to the forefront (the one on the left... can't you just imagine that face staring in your window at you?)

I also paid .99 cents for this G.I.Joe lunchbox from 1989. This I got pretty excited about too. I am trying desperately to NOT collect lunchboxes... but then there's this. I own this now. It's in the cave. Taking up space. I have a vintage lunchbox now. I'm hyperventilating a little bit and I don't know if it's from excitement or fear. Someone help me. 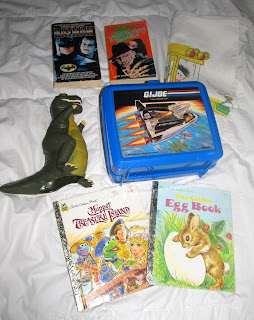 Here's a shot of the whole haul! Every item you see here cost me .99 cents. These were great, but not even the greatest of the weekend.

I'll be back soon with even more Geeky Goodwill Goodies (from this same weekend)! Until then Happy Hunting!
Posted by Derek Ash at 6:29 PM