So it's time to return to the Goodwill Geek's Mailbag! (Gotta come up with a better name for this...) 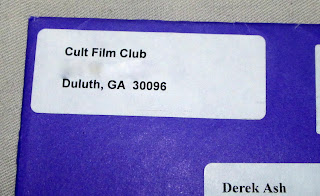 This came to me in the mail last week, and I am just now getting the chance to blog about it. I recently ordered one of the Cult Film Club's "No Tipping" Sticker Packs. I guess the money goes to help them with hosting and production costs... but I'm not so sure. They're a sketchy crew over there at the Cult Film Club. Jaime Hood over at Shezcrafti gives me reason enough to be suspicious. Pax over at the Cavalcade of Awesome plays it a bit more straight and narrow... but man that guy just seems too squeaky clean. You know what I mean? 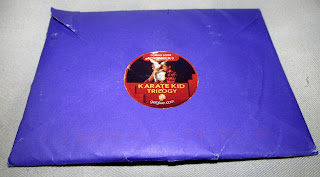 Anyway, this envelope arrived, decorated with a kick-ass Karate Kid trilogy sticker. It felt like the red-carpet treatment from the very beginning, you know what I mean?

Included were these neon-colored protective index cards... one of which had a more-awesome-than-I-could-ever-hope-to-be piece of original artwork from Shawn Robare. I'm still decidining how I want to display this in the cave. Just tacking it up somewhere seems dismissive. I'm going frame shopping. 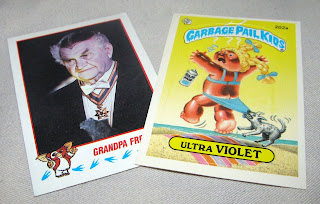 Also included were these two random vintage collector's cards. What Shawn may or may not realize is that he could not have picked better cards to select for me specifically because I love GPK and I love Gremlins 2, and specifically the Grandpa Fred character because he is a horror host with aspirations. And because: "Fire. The Untamed Element, Oldest of Man's Mysteries, Giver of warmth, Destroyer of forests, right now this building is on fire. Yes! The building is on fire! Leave the building! Enact the Age Old drama of Self-Preservation!" Because I want that as a ring-tone when I finally get a big-boy smart phone. 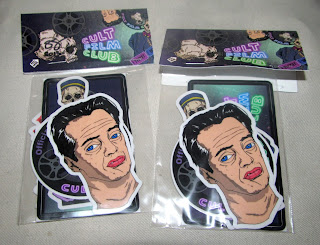 Anyway... here are the sticker-packs themselves. I ordered two because I F**KING LOVE CULT FILM CLUB!!! And I want it to go on forevers. If you look closely on the left, Shawn signed the header of the pack for me. That one doesn't get opened. It's so f**king money, baby. 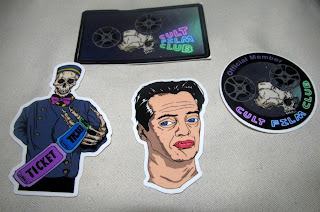 Here are the stickers from the pack I opened. There was actually a Branded in the 80's sticker included as well, but I didn't realize it was in there until after all the pictures were taken. It was stuck to the back of one of the other stickers I think. Not sure. But it was awesome too... just not awesome enough for me to over-come my laziness and get an additional picture of it. Sorry Shawn. I think my absolute favorite one is the ticket-taker... but the CFC projector-skull is just such a sweet design I can't decide... and Steve Buscemi has never looked better than he does as a sticker.

(BUT if you buy some stickers and then post a comment on Shawn's Branded in the 80's blog, he'll toss one if for you too!!!) 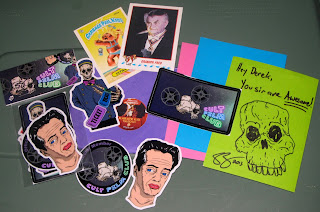 Here's (almost) all the loot together in one shot!

I have not decided what I want to stick these all over yet. I'm thinking I'll slap them on a binder and put AWESOME stuff inside. For now, I just have them in a card collector sheet until I decide. If they're durable enough to go on my car that's definitely where at least one of them will go.

Soon I'll write a post on the stuff I got from Boxsome! I thought about just including it here, but I really wanted to let Shawn's stickers and the Cult Film Club shine here. The blog is great, but be sure to check out their podcast! But wait! There's more! Join the club and watch the movies in time to listen along! You can also follow them on facebook and twitter so look for them there!

I want to send out a genuine thanks to Jaime, Pax, and Shawn for coming up with such a great, addictive podcast, and for such an incredibly cool way to support and promote it!

I'll be back soon with some Geeky Goodwill Goodies! Until then... Happy Hunting!
Posted by Derek Ash at 3:16 PM