So Finally, My Trip to Bangor a While Back...

So just a while back I talked about my most recent trip to the Brewer, ME Goodwill. That had a couple of nice finds. I like getting out of the local store from time to time and seeing what shows up at other stores in the hour radius around my home.

But then that same weekend, I actually went to the Bangor Goodwill, and I found the following loot: 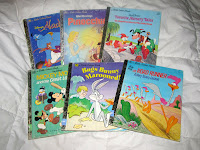 Little Golden Books! There were actually a TON of Little Golden Books I was tempted to bring home... but I didn't want to spend 20+ dollars on a bunch of them that I wasn't really sure I actually wanted. I ended up paring down to a couple of Sesame Street books (always a must-have), some Disney and Looney Tunes books, and some oldies but goodies I remember from when I was a kid. All of the Golden Books (and similar ilk) were .99 cents apiece.

Of particular note, were these three. The Raggedy Ann book I had as a little boy and I loved it. I think I remember having both the Benji and Wizard of OZ books as well, but how cool is it that Benji has a LGB? The one that really stands out of the three was the Wizard of OZ book, which looks like it was actually manufactured incorrectly. As you can see from the picture above on the right, the back cover was attached upside down. I don't think it makes it worth money or anything, I just thought it was really weird and interesting. 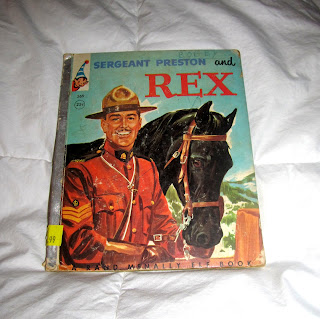 I was particularly excited to find this little piece of history: It's not a Little Golden Book but a similar concept: It's a Rand McNally Elf Book from 1956: Sergeant Preston and REX. The best way to describe the condition? Beat up. It's been written on a bit, and the price tage took off some of the foil spine-cover... grrr... but it's still a great little treasure from days gone by. 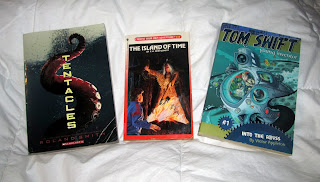 Just some random YA books here. The Island of Time is a CYOA book from 1991. I like the concept behind sort of rebooting Tom Swift (he's a Jr.) as a daredevil modern day inventor/adventurer... And Tentacles is the second in a series of books about Cryptozoologists I've been meaning to read. All three of these books were .99 cents as well.

Saw a bunch of pretty cool old comic books while I was there... but boy, if Goodwill has one really weak-spot price-wise it has to be comic books. They seem to think people can't just go buy old cruddy comic books for .50 cents apiece anywhere else. 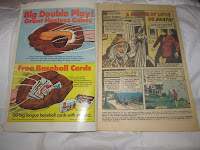 The ones for sale at the Bangor store were all 1.99 apiece! So, sadly, even though there were a bunch of kind of semi-cool old books I thought about picking up... I only ended up leaving with the 2 pictured here. These 2 just called out to me to buy them. I don't care if those books were worth a FORTUNE (I'm telling myself) I just wasn't paying that much.

So Quik Bunny and Grimm's Ghost Stories made it home.

Yes. I paid 2 dollars for a comic book about the Quik Bunny. Spider-Man does make a guest appearance. 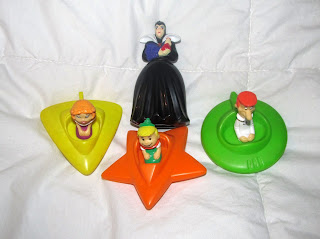 All right, we're officially past the books (Mostly. I have one more to share later) and into the toy department. THIS set of four toys was in a grab-bag together and was only priced .99 cetns! The Jetson's Toys are Wendy's premiums from 1989. 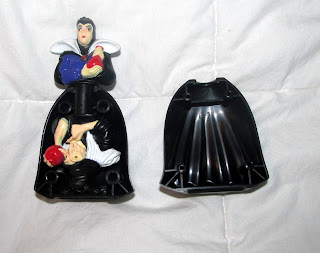 The Evil Queen from the 1993 run of Snow White Happy Meal toys is EXCELLENT. She has an old lady up her skirt. I wish everyone in the world had this feature. 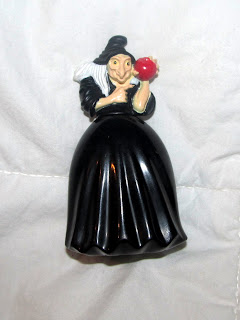 Not necessarily an old lady I guess. We could keep plumbers down there, or tax accountants... or whomever. You have to admit this toy is cool as heck though. I keep mine in Queen mode right now, but the old witch is sure to rear her ugly head sooner than later. 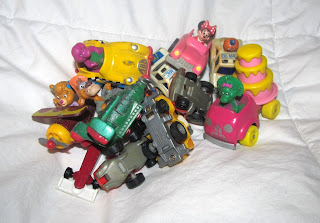 Up next is a grab-bag of die-cast cars I found for 7.99 on regular price... but because it was the half-off color, I got it for 3.99. You'll notice some of the Tail-Spin vehicles in there (which I already had) and some Barney and Baby-Bop cars in there too... And a Minnie Mouse... But the real reason I picked up this bag was for these: 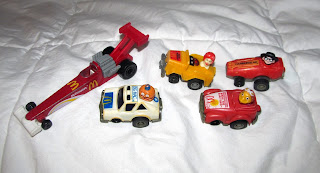 From 1984, the four pull-back cars are in slightly rough shape, but still fun. There were 3 of the Big Mac cars included, one missing a tire. And the really cool part is, I have vague memories of actually owning some of these when I was a little boy. I think these were the exact sort of toys that were pulled back, let go of, and promptly lost forever under my Grandmother's stove. The dragster on the left is from 1993, from Hotwheels. I love this car. It's got a bit of paint wear... but it just looks so money baby. I paid under a dollar for each of these guys (since I did not really want the other cars in the bag).

Finally... there was one last find I made that day that REALLY had me excited. And here it IS: 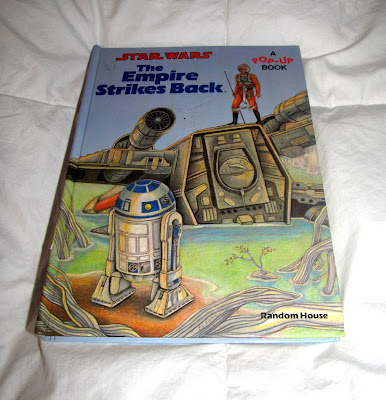 A copy of Star Wars: The Empire Strikes Back Pop-Up Book from 1980! I paid .99 cents! I thought this book was a genuinely exciting find that left me hopefully digging for the other 2 books for the next 20 minutes. To no avail. But still... Yay! The genuine "pop-ups" are actually kind of scarce in this book, including only the title page with Luke on a tauntaun, and then a ship flying past Cloud City later in the book. The rest of the book is of the interactive "pull here" or "slide tab" variety. But they're all fun! A favorite of mine is Luke retrieving his light-saber in the wampa's ice cave. I took shots of every single spread in the book (and two of Dagobah because it's pretty cool to see both versions of the pages). I'm not going to comment on them. I'll just let them speak for themselves.

That's it for me tonight folks! I'll be back soon with more Geeky Goodwill Goodies! Until then, Happy Hunting!
Posted by Derek Ash at 1:39 PM