Welcome back to Goodwill Gaming Week! Today I'm going to showcase an amazing copy of a Mexican BINGO game: "Juego De Loteria". It is "Autentica" which in my hackneyed translation I think means authentic... I'm not going to Google it. You want... you can do it. I paid .99 cents for this bad boy. 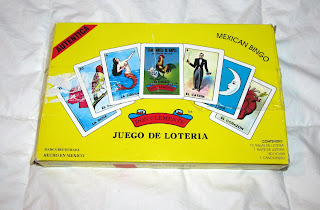 Here's the box. The artwork is what initially caught my eye here. It occured to me that some of the images on the top were vaguely Tarot-ish, and so I popped open the box (you can see some tape damage where they resealed the box before donating it) to look at the BINGO cards. 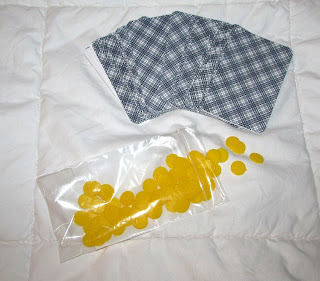 Included were this baggie of little yellow chits, and this deck of plaid-backed cards. The cards are shuffled and drawn to determine the pictures on the BINGO cards to cover with the chits.

Some of the images on the cards are people of various different walks of life. Including dapper gentlemen, Ladies in skirt-suits, knife fighting valientes (valiant or brave)... and chalupas? I have no idea why this woman is being referred to as a menu item at Taco Bell. Okay I did Google that one. The chalupa is the canoe. This makes some sense to me now. I'm trying to be culturally sensitive here. 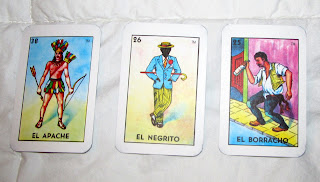 Here are a handful of gorgeously illustrated images of either cultural, celestial, or mythological significance. El Sol and La Luna are obviously the sun and moon respectively. El Mundo is the world. El arpa is a harp.

And here is some unadulterated nightmare fuel for the kiddos. But apparently La Calavera refers directly to something to do with the Day of the Dead holiday. The other three cards are all pretty much on the nose.

Here we suddenly have a random assortment of items from mildly menacing to bizarrely mundane. What a lovely gorrito! Have some ketchup.

And an assortment of juicy melons. Oops! How did that mermaid get in there? 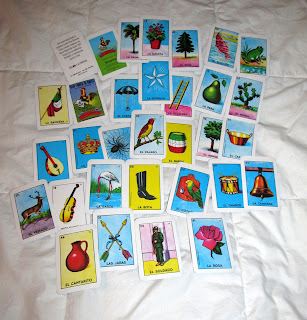 Here is the entire rest of the assortment that I didn't feel like highlighting. Lots of pretty, innocuous, and regular items one might encounter while south of the border. I actually really love the look and feel of the artwork on all of these. I may have had a chuckle at some of the more scandalous images, but overall this is a game from a different culture, and I think the contents of the images speak volumes about some of the day-to-day experiences. 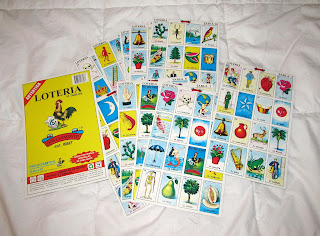 Here are the Bingo cards themselves. I probably won't actually be playing this game with my kids, to be honest, because I don't want to have to explain about the drunk guy or Satan... but I like the components nonetheless.

I'll be back tomorrow with more Geeky Goodwill Gaming Goodness! Until then, Happy Hunting!

If you want to see yesterday's game check out: