So... my wife and I and several of our friends often like to go to drag shows. Usually they're done locally at the Ellsworth Elks Lodge (?) but occasionally some travel is required and we have to go an hour or so out of our usual neighboring towns and make an evening of it.

When we heard that there was going to be an 80's themed show in March at the Hollywood Slots Casino in Bangor, we knew we wanted to go... because.. 80's. It was a benefit called "March Dragness" and the funds went to setting up the Pride Parade this summer, as well as other LGBT awareness programs.

So anyway... the date was barreling down on us like a freight train, and I realized I had not prepared myself to dress in any kind of 80's fashion whatsoever. I own nothing that even remotely evokes 80's style. Someone suggested I wear one of my Hawaiian shirts and go at Magnum P.I. but I felt this just smacked of laziness.

I'm someone known for putting no small amount of effort into my Halloween Costumes, so I didn't want to just phone this one in... even though it was looking more and more like I was going to have to. Then I had the bright idea that everyone does whenever they're trying to put together some sort of "retro" costume, be it 60's, 70's, or whatever.

They have all the old clothes right? That's where old clothes go to die! There must be racks upon racks of shirts with Rubix-Cubes and Cyndi Lauper-style lace vests, and all the whatever else people wore back then. It should be easy to find 80's stuff there, right? Right!?!?

Turns out no. They have old clothes, but they don't have a neat and tidy rack of clothing labeled "80's clothes here". It was mostly old grandpa's-just-passed stuff and Lobster-festival t-shirts. So I had to get inventive.

I wanted to do something Don Jonson-esque...

SO when I saw this:

I wanted to roll up the sleeves, so I took off all the weird gold buttons, tore out the shiny beige lining inside the sleeves, and rolled those suckers up.

I accessorized with some neon pieces, a Kool-Aid Man T-Shirt, some sunglasses (I could't wear over my actual glasses, but like the douches I was emulating, they were more for show than function, so I hung them from the pocket), a fingerless glove, and a wrist-band made with the collar of my wife's neon pink t-shirt.

I tossed some pins on there, some Muppets, some random safety pins, and a Close Encounter pin (which I remembered later was actually from the late 70's... but whatever).

And I ended up with this:


Which I have to say made me feel like this:

Yep. I was pretty excited. I even got an earring in my ear for the first time since high school. It was pretty rad. 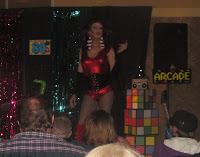 The drag-show was okay. Oddly, most of the music was from either the 90's... or it was modern club-remakes/remixes of 80's songs by current artists. Only a couple of genuine 80's songs actually got lip-synced. The host was hilarious though, and some of the performers went all out performance and costume-wise. A fun night was had by all and I photographed this sign on the way home, which I feel sums up the moral of the whole night: 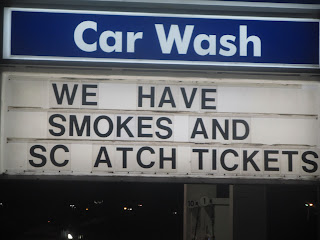 I feel it's kind of like a fortune cookie where you just have to take from it what you take from it.

I'll be back soon with more Geeky Goodwill Goodies! Until then, Happy Hunting!
Posted by Derek Ash at 11:02 AM