It's Goodwill Gaming Week here at Goodwill Hunting for Geeks! All this week I'll be featuring a game or games that I've picked up at Goodwill. Some of them I have mentioned here before, but I'll be going into greater depths. Other games I'm showcasing for the first time... like today for instance.

Today I'm going to feature a board game I found at Goodwill for 1.99. The MAD Magazine Game from Parker Brothers! I was a big fan of Magazines like MAD and CRACKED when I was a kid. They were definitely one of my gateway drugs to comic book collecting. So I was pretty excited to see Alfred E. Neuman's gap-toothed grin peaking out at me from the board game section at my local Goodwill. 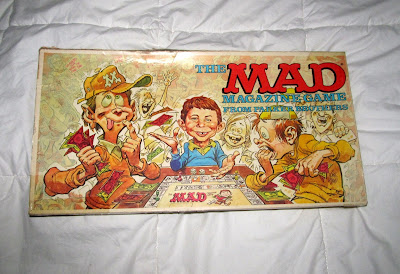 The box evokes all the great insanity that you know and love from Mad Magazine. It's pretty busted up, and yellowed with age, but the artwork still looks great regardless. 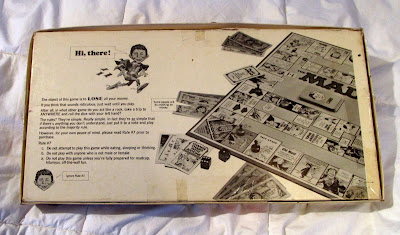 The rules were not included in the box, but there's a Wikipedia page that gives the full run-down. As far as I could tell before looking at Wikipedia, the object of the game is a sort of anti-Monopoly, where the goal is to lose all your money first. There are various ways of gaining money on the board, and ways of losing it, giving it away, trading it, etc. 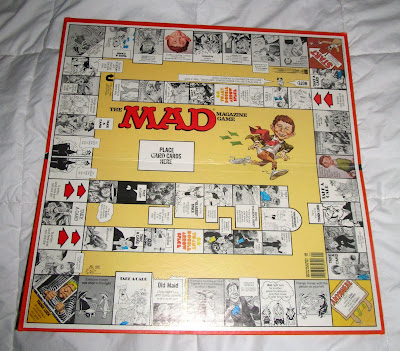 Here's the least glare-y photo I could get of the game board itself. As is the strange purview of most old games, the board itself is in MUCH better shape than the box is. 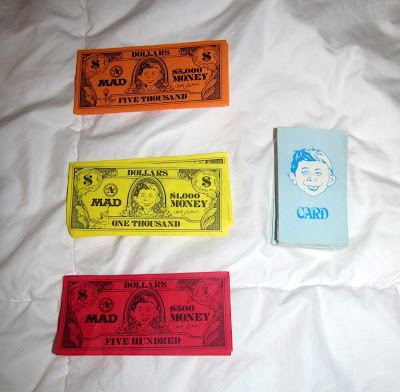 These are all of the accessories that were still included. "MAD Money" and cards to draw from the pile with various different instructions. Missing are dice and pawns, and I don't know how many of the cards there are supposed to be. There's obviously not enough MAD money included to cover the kind of exchanges described on the cards and board. (Forgot to get pictures of some of the cards, and I'm too lazy to go do it now...) 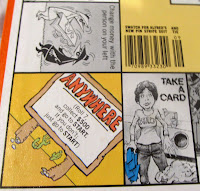 Here are some close-ups of different squares on the board to feature a few choice panels.

As you can see there's some work from MAD alums Dave Berg, Don Martin, and Mort Drucker, along with the rest of the rogue's gallery of  MAD artists. Spy Vs. Spy has a pretty big presence on the board, as does the ubiquitous Alfred E. Neuman for obvious reasons.

The game looks like fun to play. I think I'll scalp some dice from my dice bag, fish some cheap plastic figures out of a bin for new pawns, and maybe make a few more pieces of MAD money out of construction paper and give this bad boy a whirl.

Remember, all this week I'll be focusing on Goodwill Gaming, meaning I'll be featuring games I've picked up at Goodwill. So I will be back really soon with more Geeky Goodwill Goodies! Until then, Happy Hunting!
Posted by Derek Ash at 2:14 PM