A Timely Easter Post for Your Sunday Viewing Pleasure.

Well, Easter is swiftly disappearing in the rear-view mirror, and there was something I wanted to post before it was just too late (apparently 2 weeks after the fact is NOT too late for me).

It is a family tradition at the Goodwill Geek's house to paint wooden eggs at Easter to keep throughout the years. Everyone in the family paints one (this totals 5 between 3 kids, my wife, and myself) and we display them with pride every year. We missed years 2009 ans 2012. But all the other years from '05 to '13 are present and accounted for.

The boys, being little guys, tend to keep theirs pretty simple, but my wife, daughter and I get pretty creative/occasionally geeky with ours. My eggs are at the very end of the post. And they are the very geekiest!

Pictured above are the eggs painted by my 2 sons. 3 of them belong to my 4 year old and 2 of them belong to by 2 year old. The first ones they each did were some eggs with their hand and toe prints on either side.

Here are my daughter's eggs. You can see she started to really get creative with the last 3 years worth. The pink egg with the gray/white bunny is supposed to be a skel-animal. Then some sort of devil-bunny. The last one there, the on the right is one of the announcements they shine on the sky during the Hunger Games to let you know one of the participants is dead. My daughter is morbid.

Here are my wife's eggs. For the most part she's all hippie-dippy with her eggs, making them all stuff from nature. Trees, moons, lady-bugs, birds, and strawberries. With the occasional TARDIS. 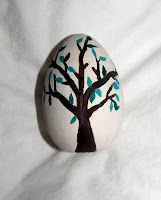 Here are my eggs. Spider-Man, a cymbal/fez monkey, Nosferatu, a robot, a Chinese Dragon, a Jelly-Bean Monster, and Raphael! (Raph was this year's egg, and the boys FREAKED OUT because we all love the show.) 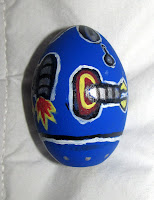 I'll be back soon with some actual Geeky Goodwill Goodies! Until then, Happy Hunting!
Posted by Derek Ash at 1:10 PM