FINALLY... the Last 2 days of my 12 Days of Christmas Cassettes

So I completely boned that all up... But ah well. Let's finish up my 12 days of Christmas Cassettes, and then get things back to the regularly scheduled post-holiday programming. There's a lot to get caught up on. So here goes!

Day 11: Some Rather Questionable Choices

One of the rules that I set for myself when collecting cassettes from Goodwill was this: Don't buy tapes ironically. Don't buy them for the sake of telling a joke or a visual punchline. I was only going to buy stuff that I genuinely LOVE. This Christmas countdown has been a pretty big exception to this rule in some cases, and no cassettes better demonstrate this breakdown of my personal code better than these two: 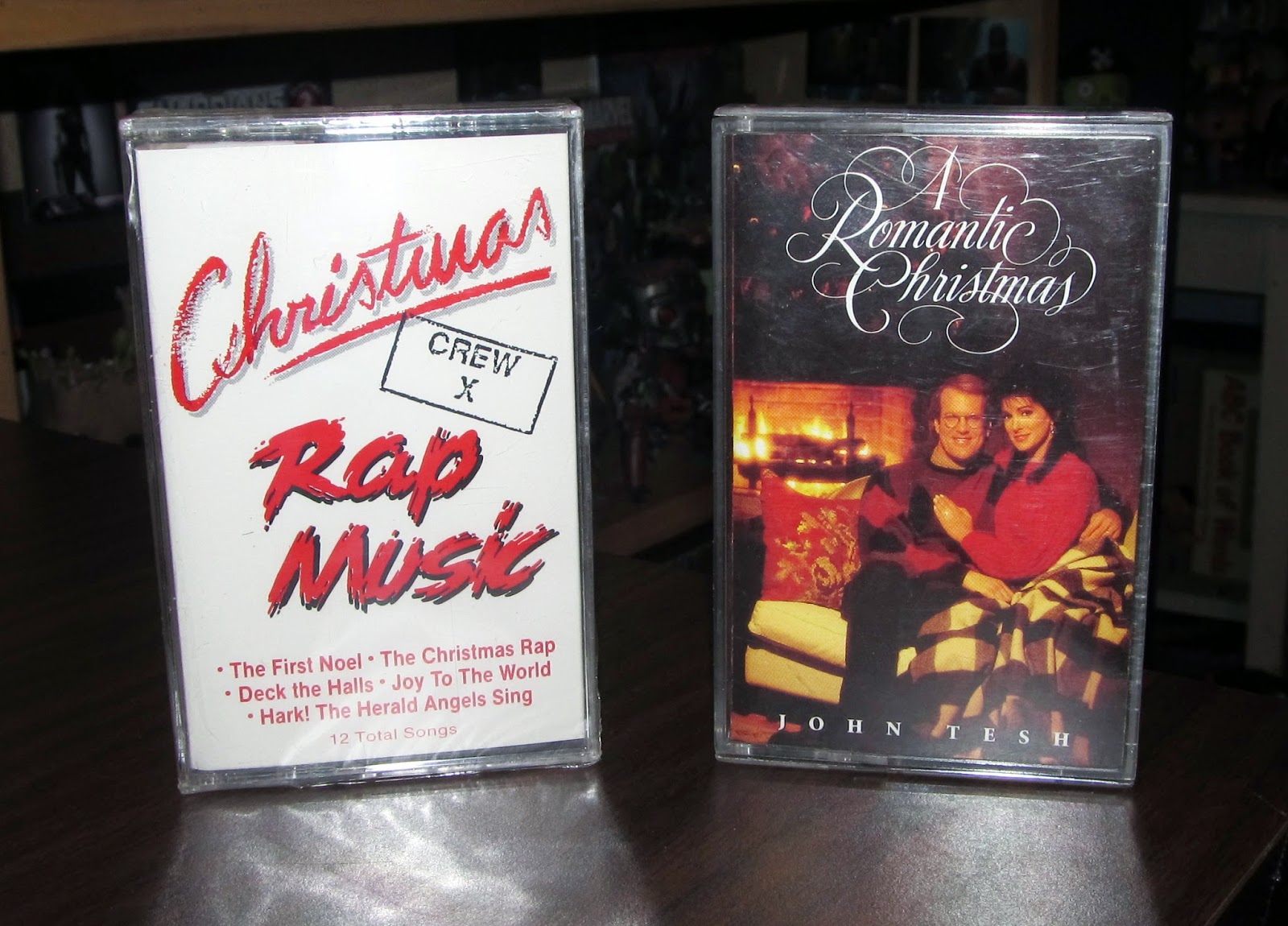 I mean, LOOK at these things!!! "Christmas Rap Music" by Crew X and "A Romantic Christmas" by John Tesh? Er. Mah. Gerd.

This thing goes so far back around from "good" that it travels completely through "bad" and almost back into "good" territory again. I'm pretty sure some of this music is going to be played in actual rotation with our Christmas playlists in the years to come. Every single track on this tape is a rap version of a classic Christmas song, with a few originals included as well.

1. The First Noel
2. Up on the Housetop
3. We Three Kings
4. Jingle Bells
5. O Little Town of Bethlehem
6. Deck the Halls
7. Joy to the World
8. It Came Upon a Midnight Clear
9. Hark! The Herald Angels Sing
10. Twelve Days of Christmas
11. God Rest Ye Merry Gentlemen
12. The Christmas Rap

Even more questionable than a Christmas Rap album however is a collection of "Romantic Christmas" songs by John Tesh. Of course the question here is: how romantic can you make songs like "Jesu, Joy of Man's Desiring" or "In a Child's Eyes" without going straight down to creepy town? Some of the songs are even accompanied by a boy's choir. This does not scream romance at my house. Disappointingly, these all seem to be instrumentals, so I guess John Tesh just wants to set a Christmas-y ambiance for sexy-time. There is no John Tesh lustily belting out double-entendre-laden lyrics for  "Bring a Torch, Jeanette, Isabella," which just seems like a wasted opportunity.

Day 12: A Couple of my Personal Classics

For my final day of the countdown I was going to feature two of my all-time favorite Christmas albums: 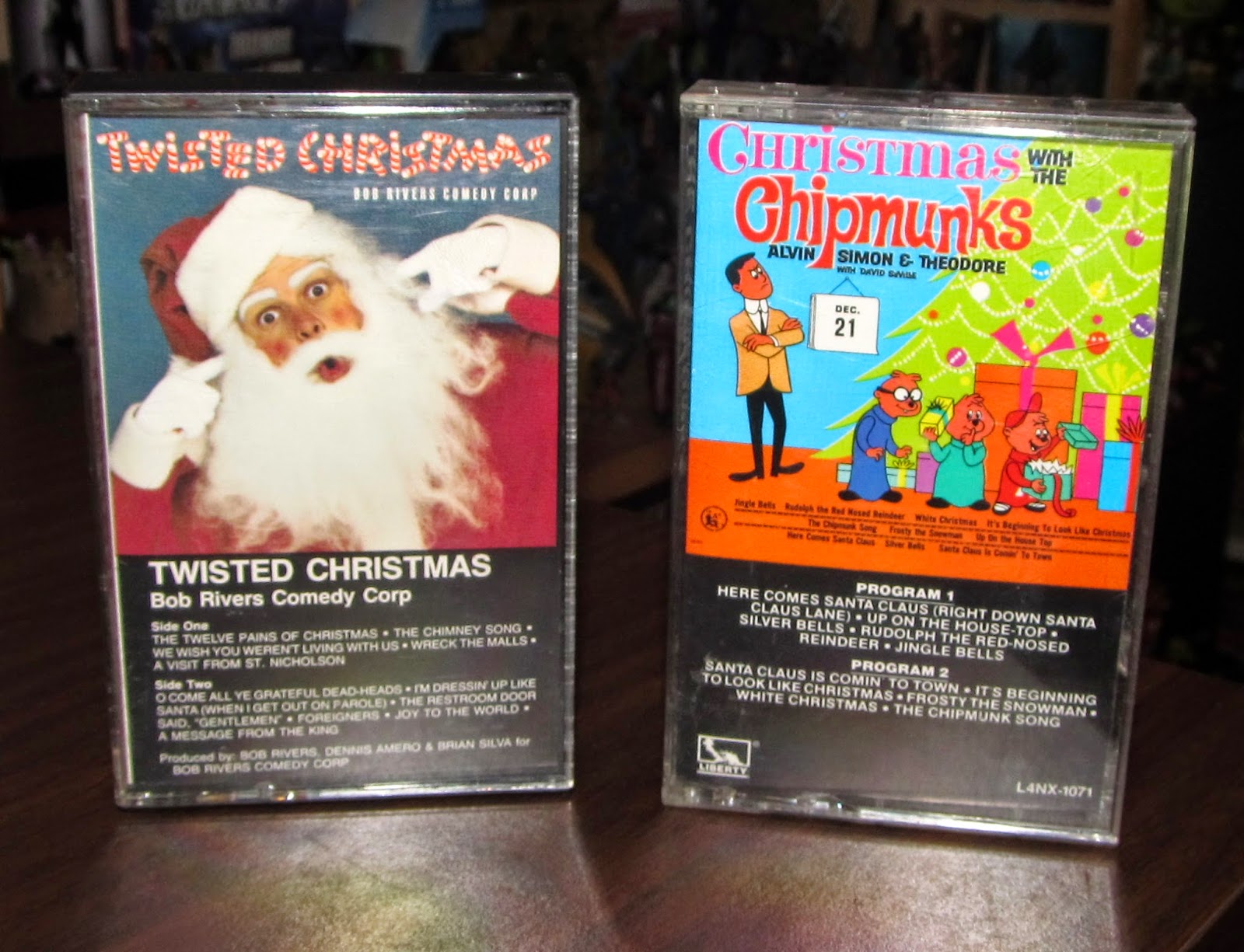 First up is "Twisted Christmas" from Bob Rivers Comedy Corp. This this has been on constant rotation for Christmas since I first heard it back in '87 or '88. My favorites are hands down "The 12 Pains of Christmas,""The Chimney Song," and "The Bathroom Door Said Gentlemen" but some other greats involve guest stints by Jack Nicholson and Elvis Presley.

-Side A-
1. The Twelve Pains of Christmas
2. The Chimney Song
3. We Wish You Weren't Living With Us
4. Wreck the Malls
5. A Visit from St. Nicholson

-Side B-
6. O Come All Ye Grateful Dead-Heads
7. I'm Dressin' Up Like Santa (When I Get Out on Parole)
8. The Restroom Door Said Gentlemen
9. Foreigners
10. Joy to the World
11. A Message From the King

And it just isn't Christmas until I've heard "The Chipmunk Song" at least once. It is a Christmas must-have as far as our playlist goes.

-Side A-
1. Here Comes Santa Claus
2. Up on the Housetop
3. Silver Bells
4. Rudolph the Red-Nosed Reindeer
5. Jingle Bells

-Side B-
6. Santa Claus is Coming to Town
7. It's Beginning to Look a Lot Like Christmas
8. Frosty the Snowman
9. White Christmas
10. The Chipmunk Song

So that was it! That was the end of the countdown that was supposed to end on Christmas. Instead, I was lucky to have it up before New Year's Eve. I'm sure you all count yourselves as very lucky indeed. What's that you say? More? You want more??? All right then. ONE LAST THING: 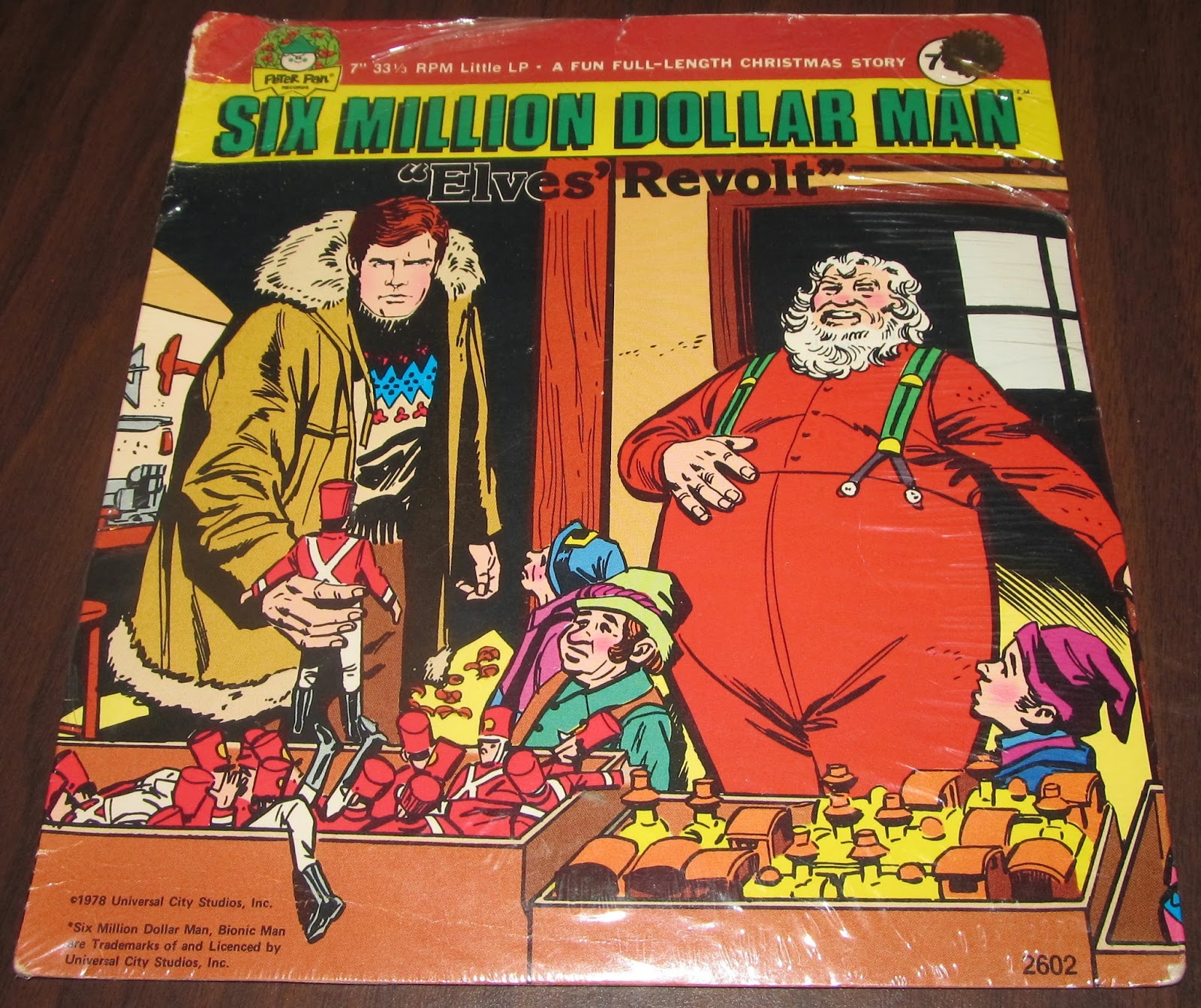 Here is an item that I have been meaning to post about for at least 2 Christmases now, and by GUM I am finally going to do it! This 7" record stars the 6 Million Dollar Man in "Elves Revolt" Here's the plot synopsis from Bionic.wikia.com:
So there are union picket lines, terrorism, and global warming involved in this very special Six Million Dollar Man adventure. The copyright on this record is 1978, which is the same year I was born! I was pretty psyched to find this at Goodwill for only .99 cents, and still in the cellophane no less! Apparently there is a full sized record that contains 4 Christmas-themed Six Million Dollar Man adventures, and this is just one of them... But it's enough for me. Here. Give it a listen (It is bats**t INSANE.)

All right! Now I'm officially done for 2014! I will be back in the new year at some point with a semi-regular posting schedule, and LOTS of stuff to talk about that are literally MONTHS behind schedule. So look forward to that!

I'll be back soon enough with some Geeky Goodwill Goodies! In the meantime, Happy Hunting!
Posted by Derek Ash at 1:42 PM