So you thought Creepmas was only for adults... huh? Well, as yesterday's post proves, there's a definite market for chocolate-in-your-peanut-butter marketing for the frightful and the festive for kiddies this time of year! With that in mind, today's post is all for the youngest fans of Creepmas! I'm highlighting 7 books that fall under the category (IMO) of "Creepmas books for kids". 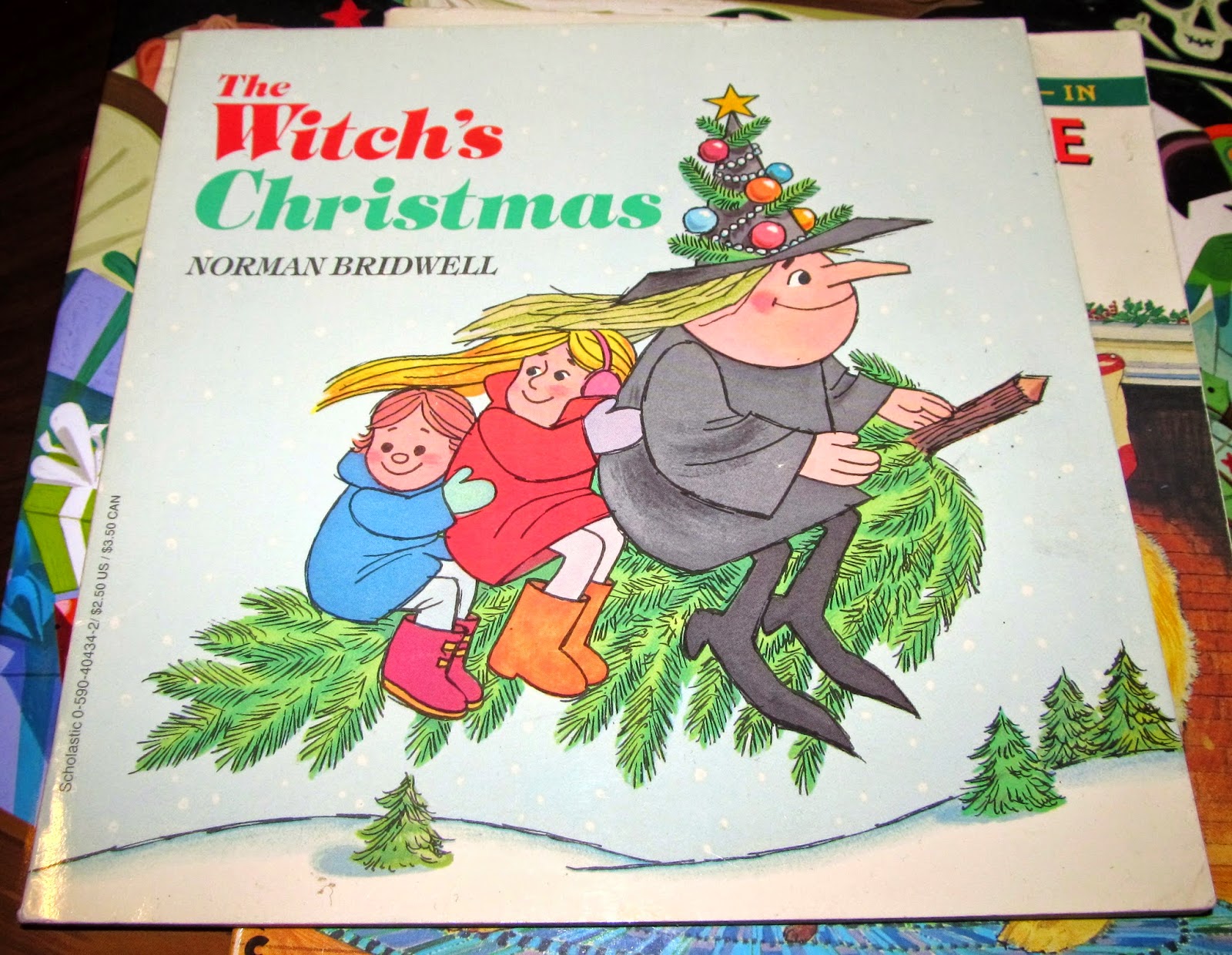 Norman Bridwell is most famous for his Clifford, the Big Red Dog series. He created many other books during his career as a childrens' book author/illustrator. Including a series of about 5 books about a witch. The Witch Next Door, The Witch Grows Up, The Witch on Vacation, the Witch Goes to School, and this one: The Witch's Christmas. The witch is a friendly practitioner of the dark arts, and lives next door to some children who appreciate her talents. She also seems to simultaneously serve the Dark Lord while celebrating the birth of the Savior. 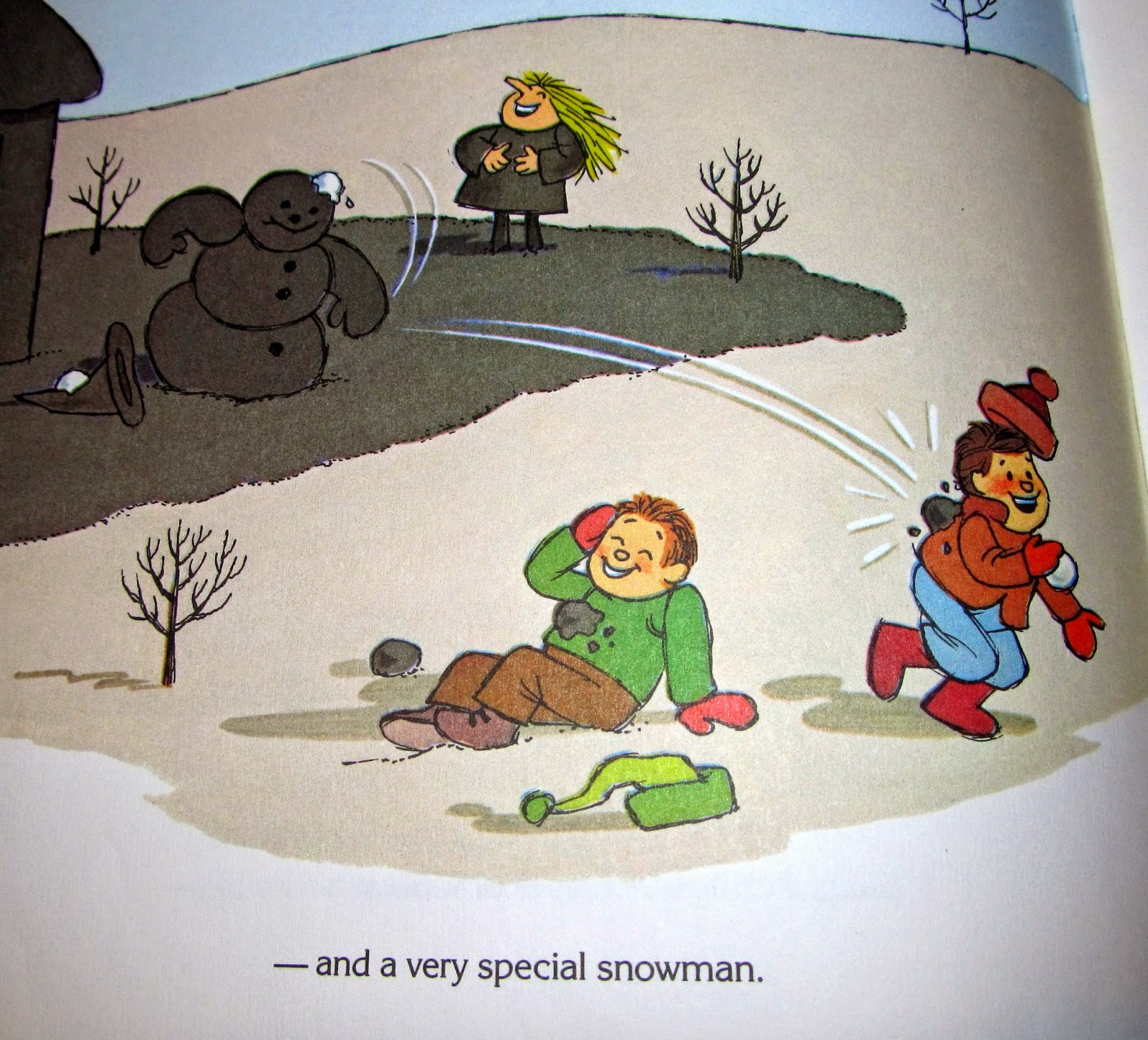 We get a look at the black snow that falls on the witch's property. And the animate snowman who attacks all who threaten his mistress. 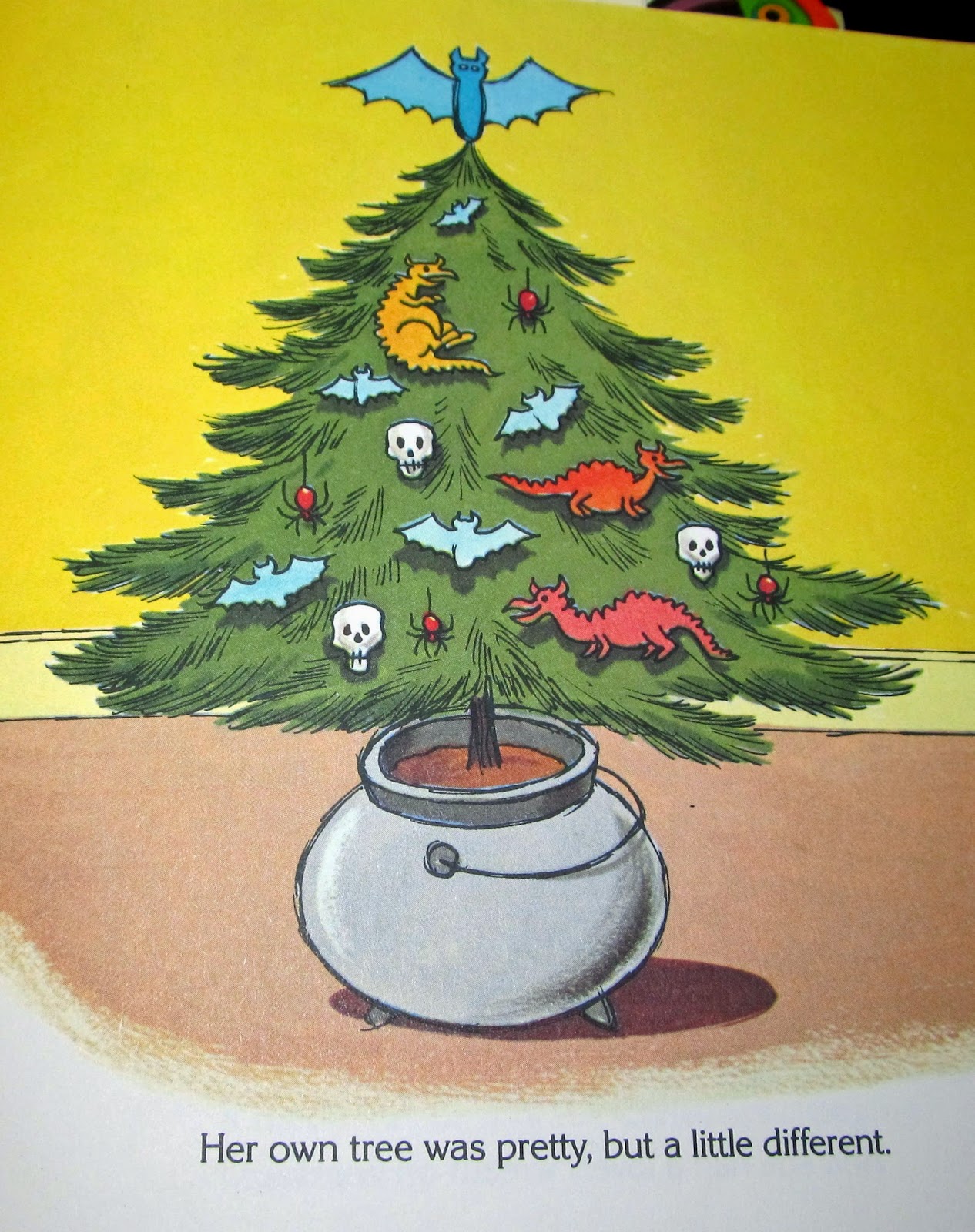 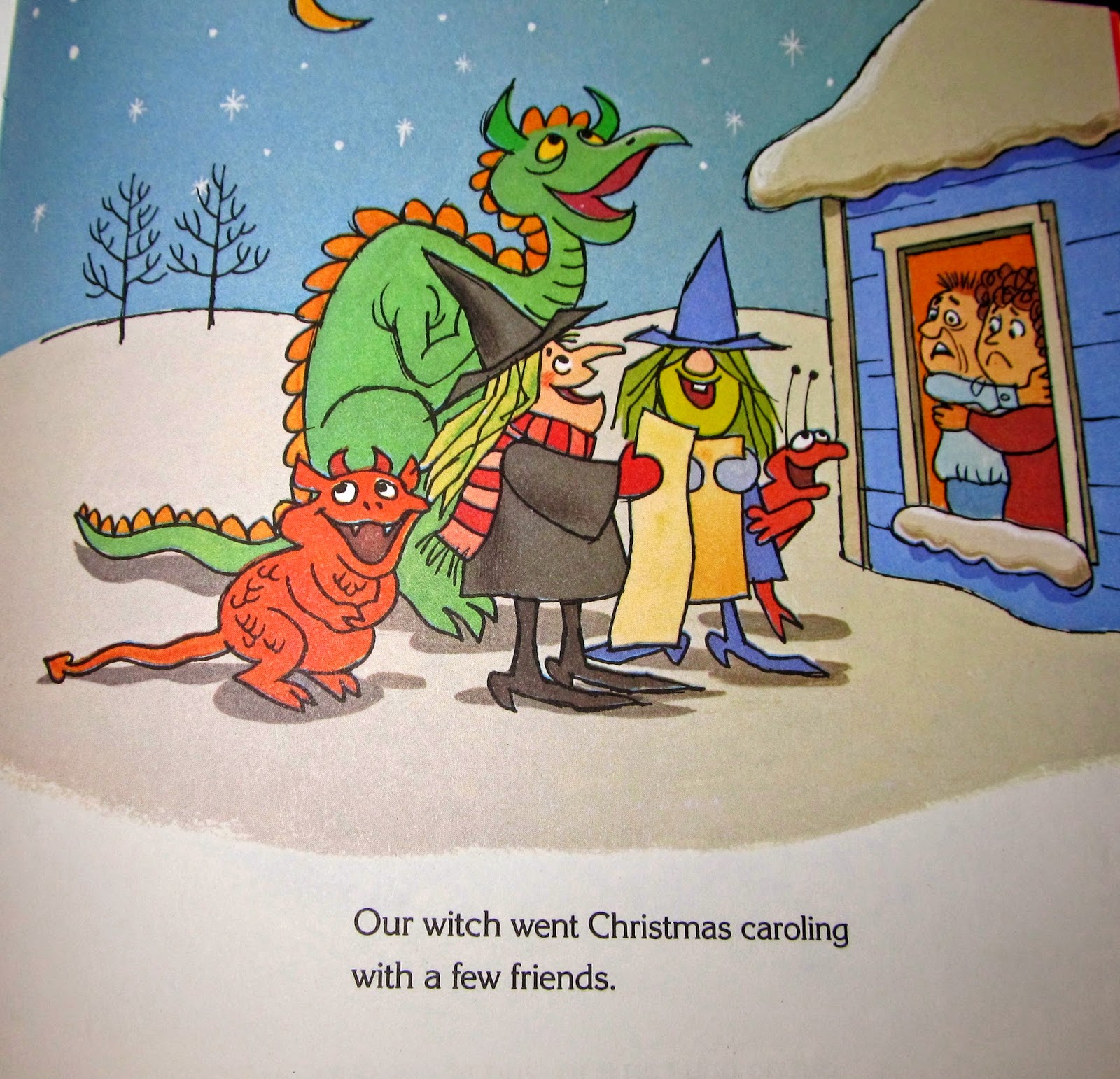 Her Christmas traditions are similar but appropriately Creepmas-y. The tree is decked out in skulls and bats and spiders and the like. Her caroling group is a horror show that terrorizes the neighborhood.  All-in-all this is a cute book that my kids do enjoy. The witch has an adventure where she saves both Santa Claus and a pair of astronauts from a frosty death in the vacuum of space. Check it out! 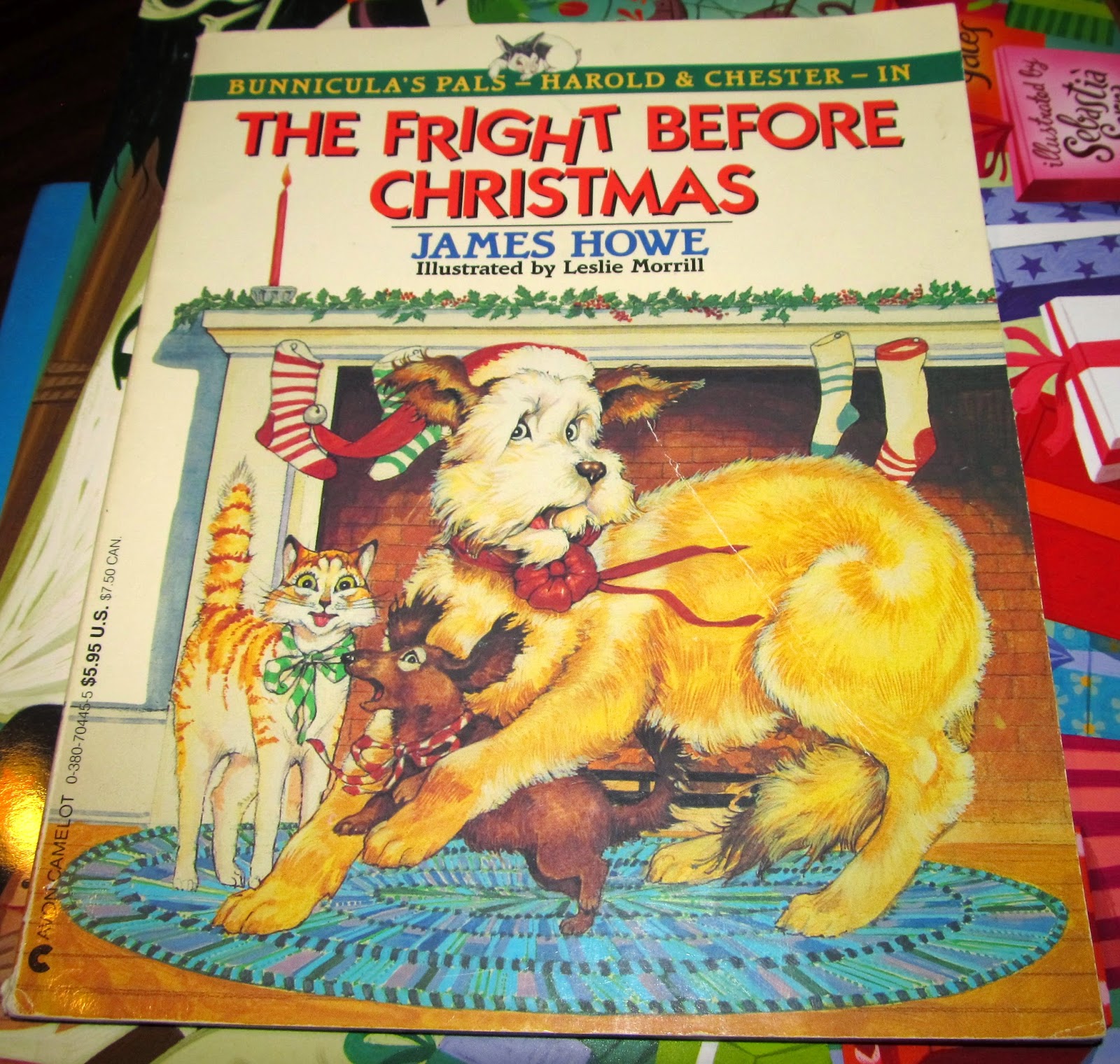 Next up, from the author of Bunnicula, we have The Fright Before Christmas which also stars Harold, Chester, and Howie, from the Bunnicula books (Bunnicula himself makes a cameo but is, disappointingly, NOT the focus of the tale). 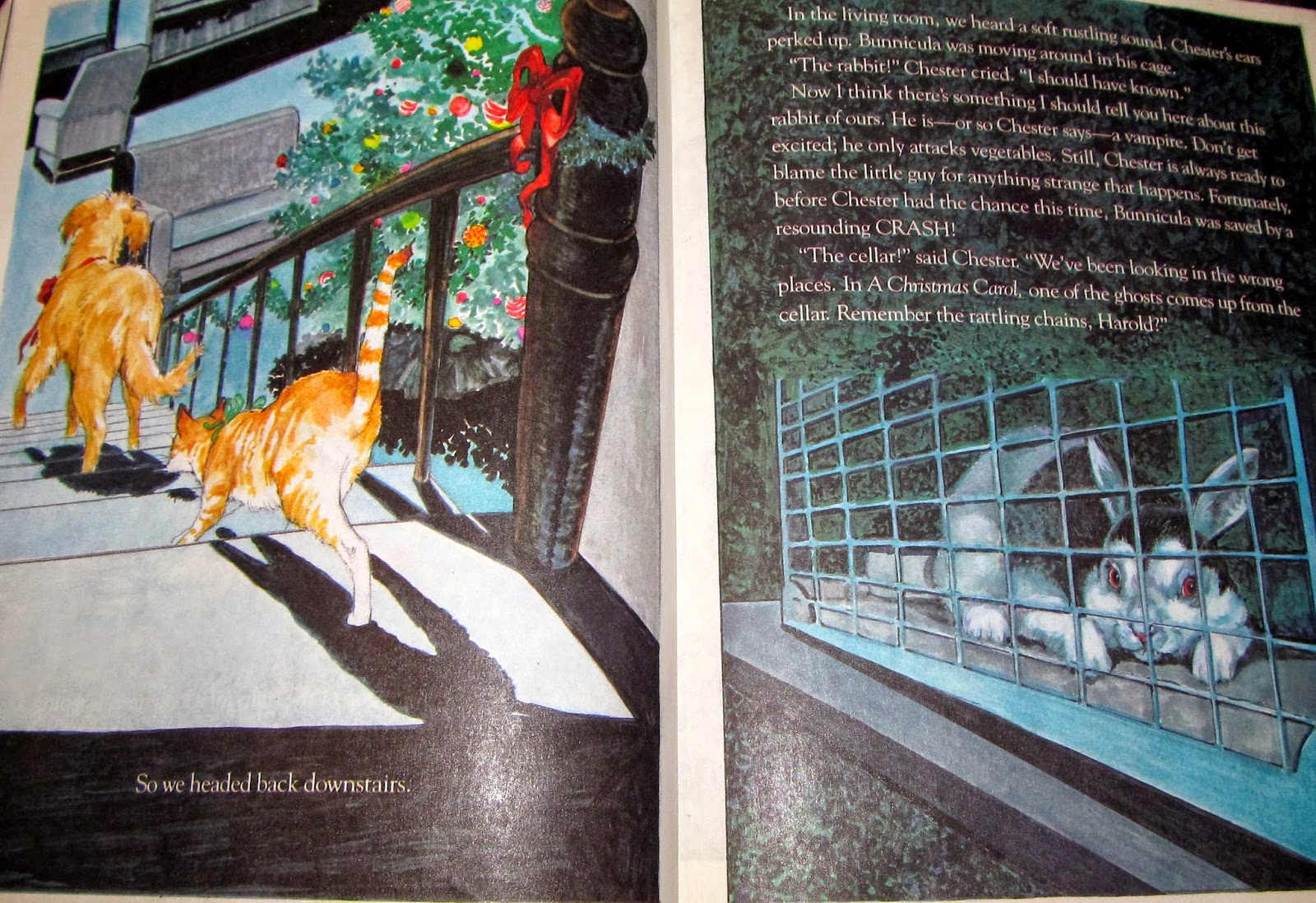 The animals are worried about such horrors as fat men with sacks sliding down chimneys and ghosts of Christmas (like the ones in a Christmas Carol) showing up to do who-knows-what to their family. So Harold and Chester set out to stop this holiday horror-show from happening.

Hijinks ensue and absolutely no one is  slaughtered by a vampiric leporid. So there's a nice build-up but not much payoff. And a totally wasted of a blood-drinking bunny. 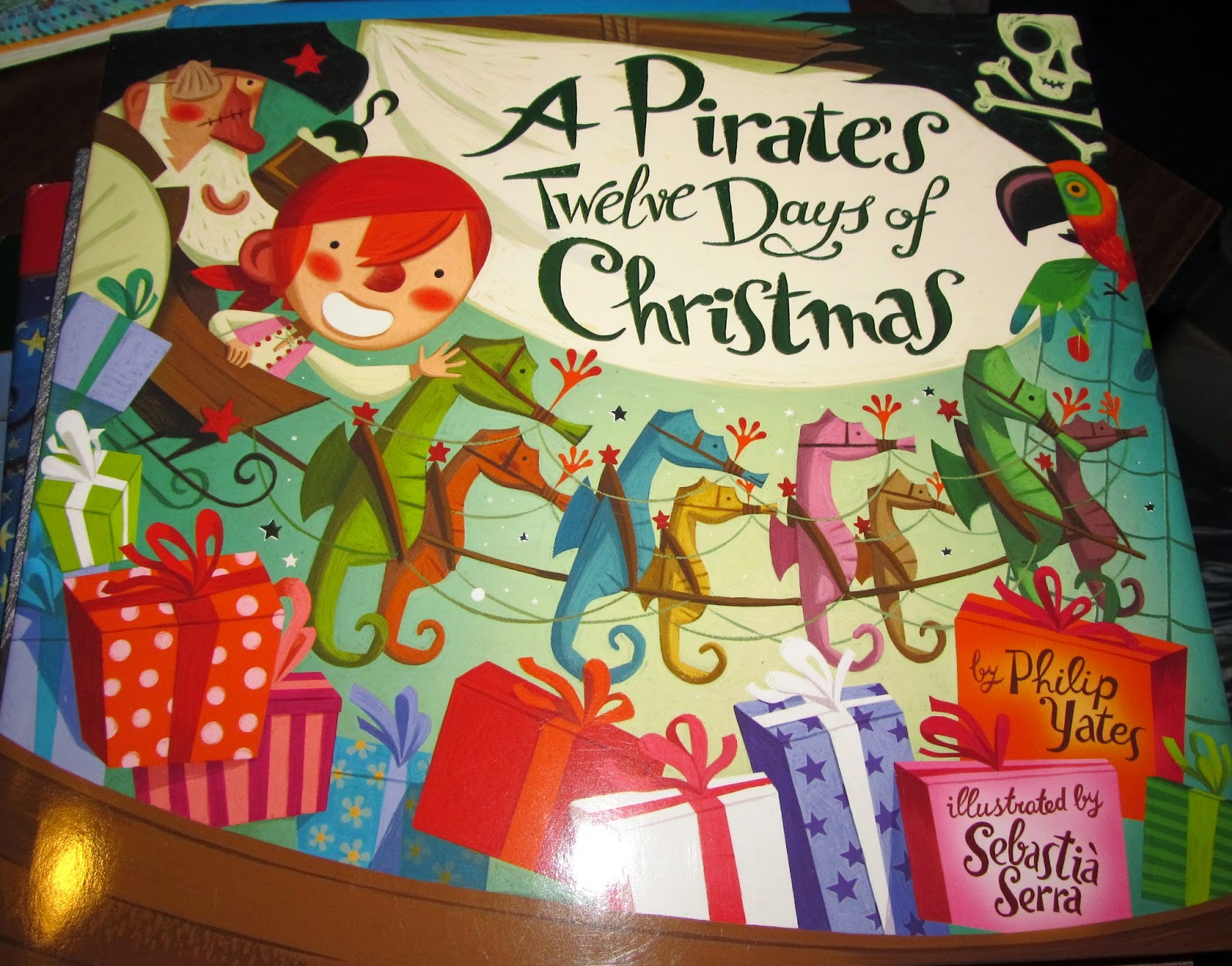 Next up we have A Pirate's Twelve Days of Christmas. Now, you may or may not know from this blog, but we at the Goodwill Geek's house have made pirates a pretty standard part of our Halloween celebrations. So mixing them up in our Christmas celebration SCREAMS Creepmas! 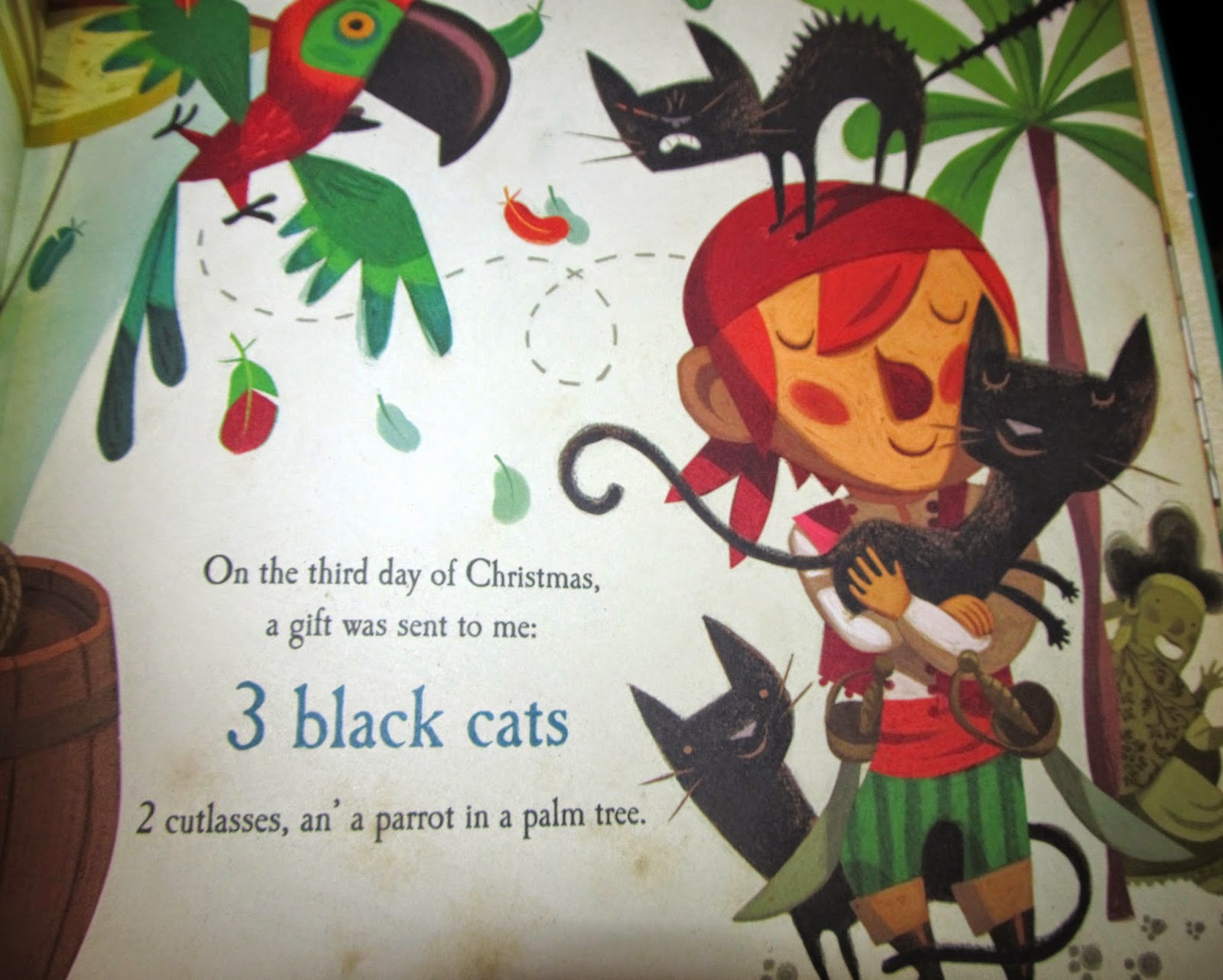 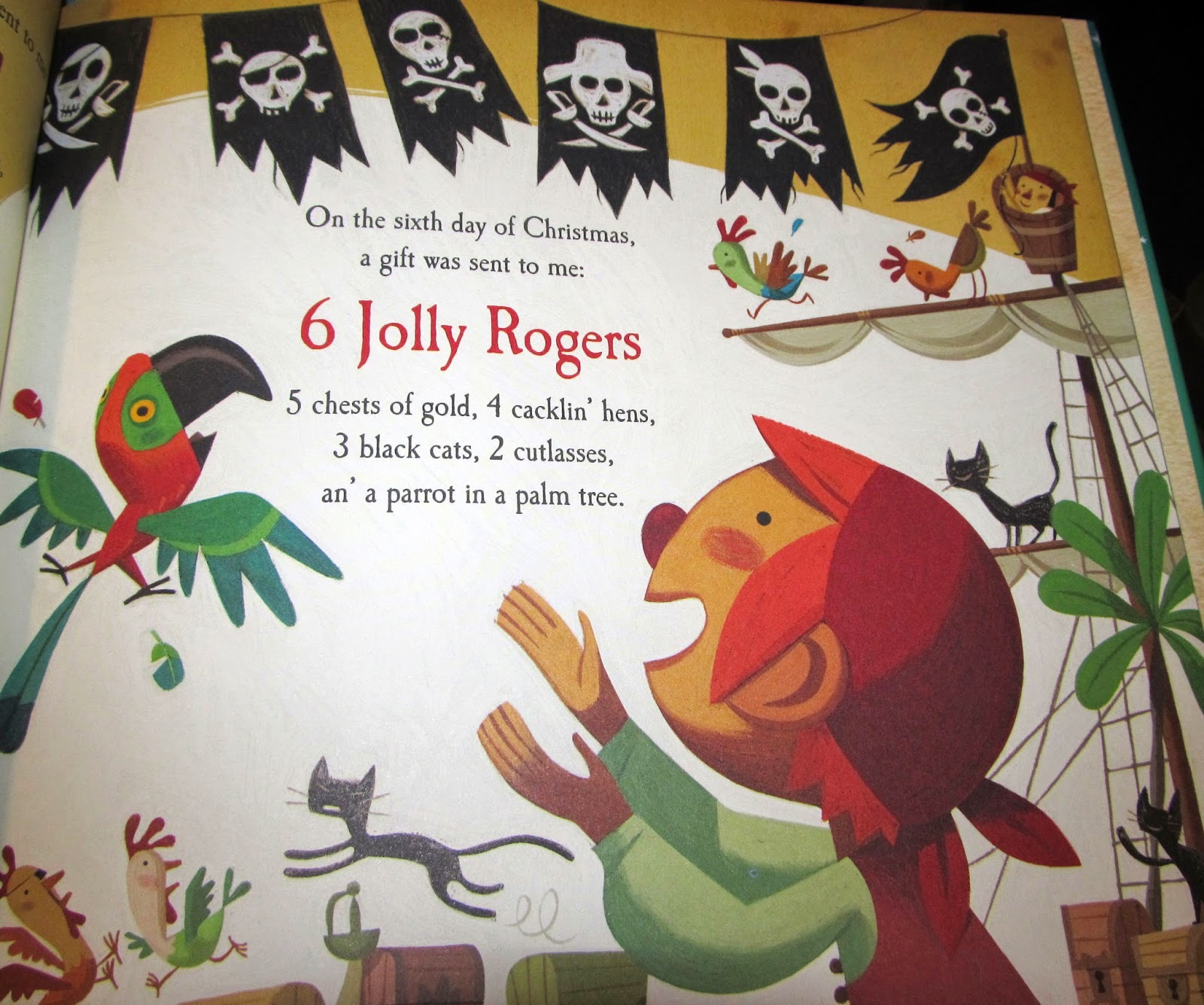 Most of the 12 gifts are pretty tame, including a Parrot in a Palm tree, a pair of cutlasses, 9 Mermaids singin', and some monkeys. But the 3 black cats and the 6 Jolly Rogers? Pure Halloween gold dear readers. And when you get Halloween gifts for Christmas you get CREEPMAS!!! 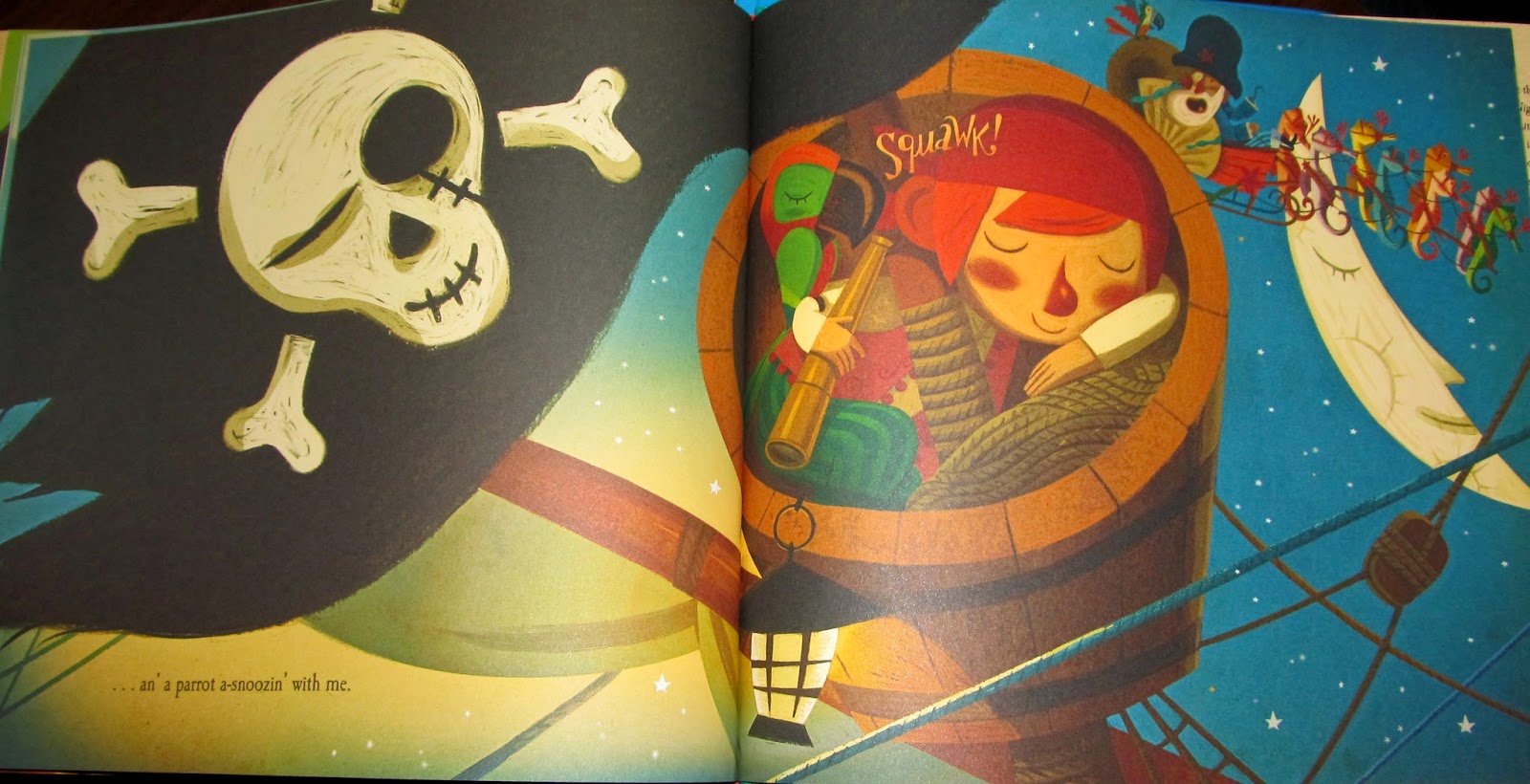 Finish it all off with a shot of a sleepy Pirate being watched over by a winking Jolly Roger and a Piratical Santa... and you've got a Creepmas classic on your hands. 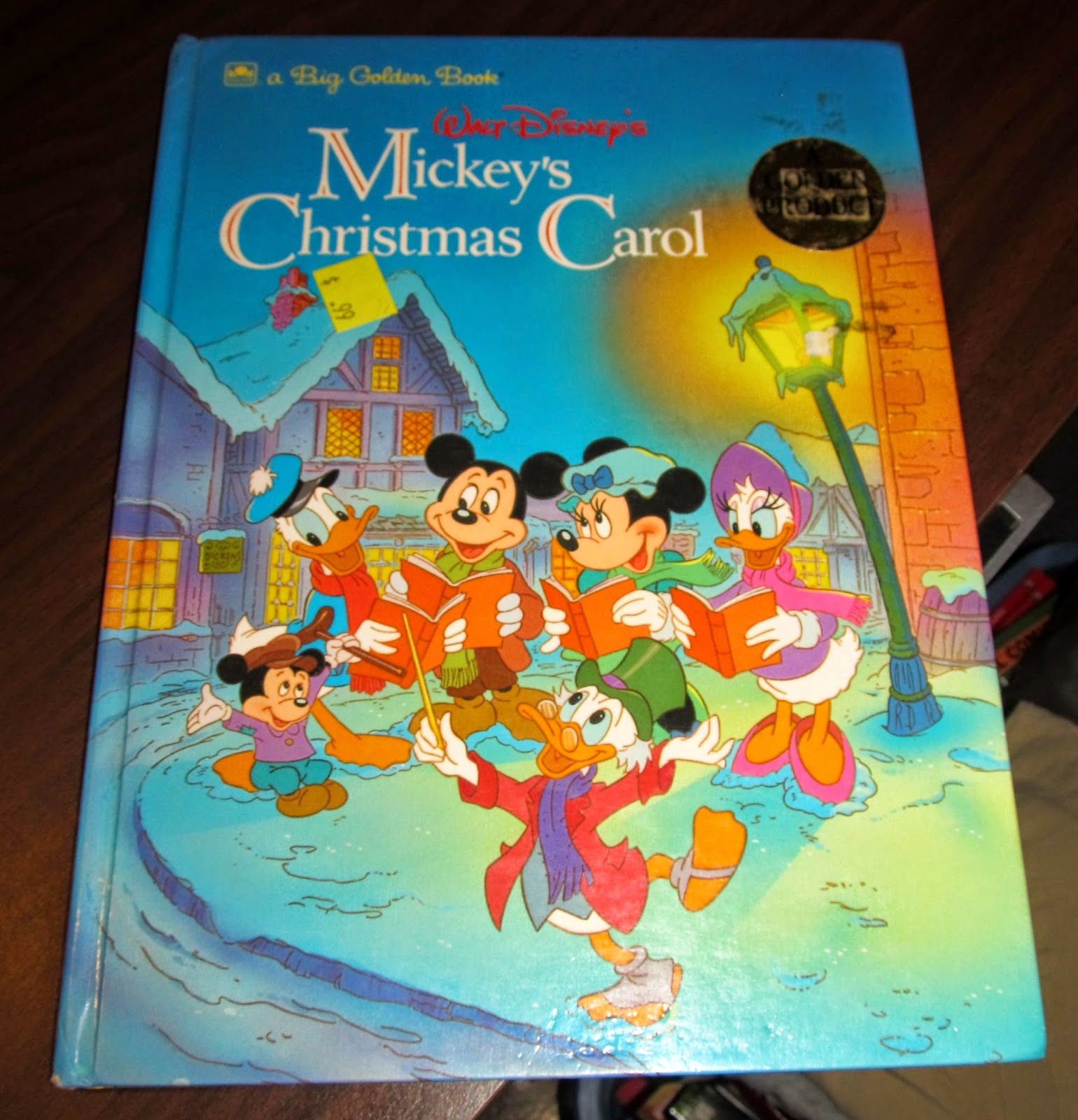 So I've already discussed the Ghosts of Christmas as a different part of my 13 Days of Creepmas, I am aware. But now I'm going to focus for a moment on the book version they put out of the tale. 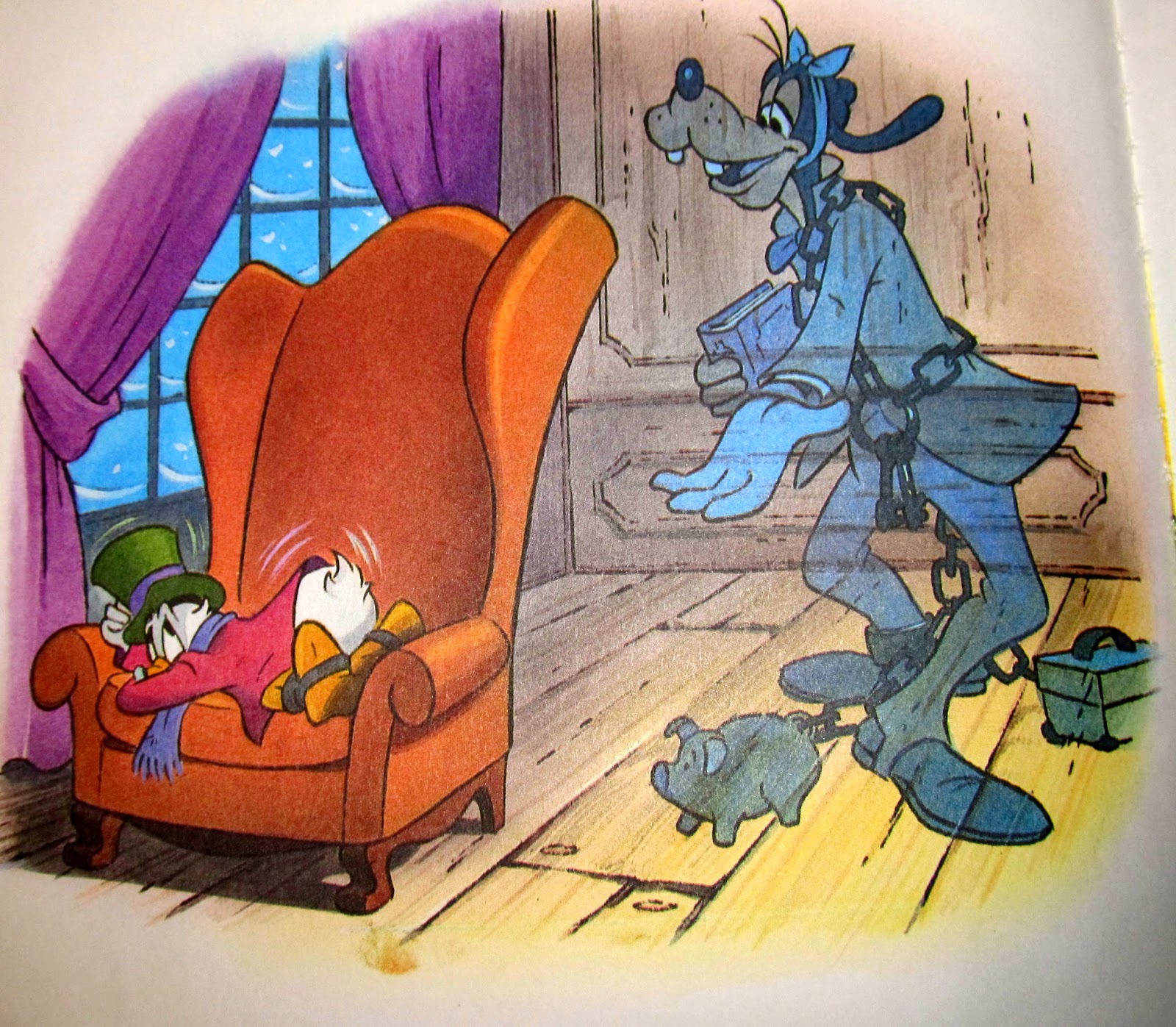 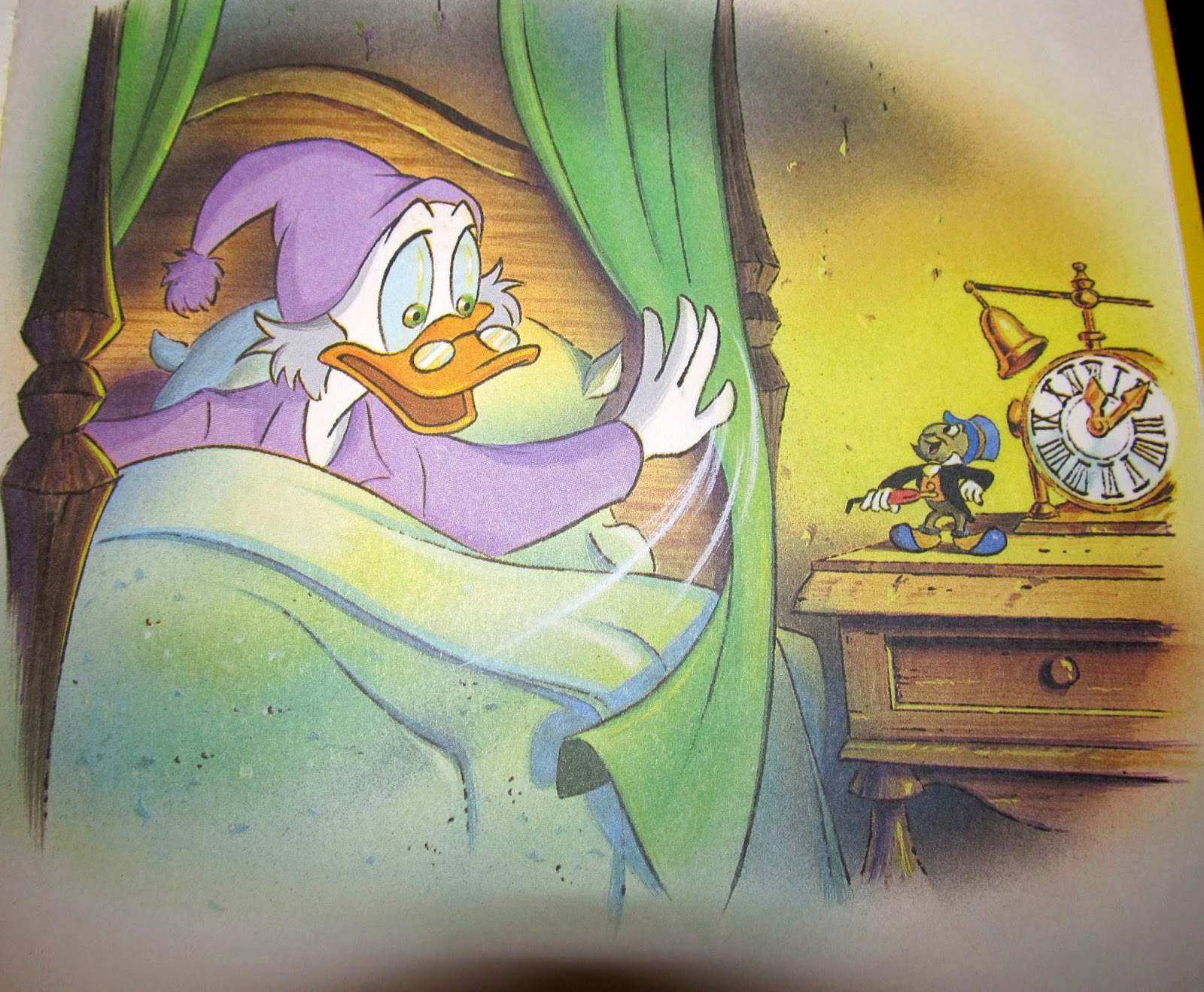 Marley shows up, as do the other 3 spirits, and for the most part, the only disappointment of the whole thing is the fact that we lose the door-knocker scene that kicks things off. 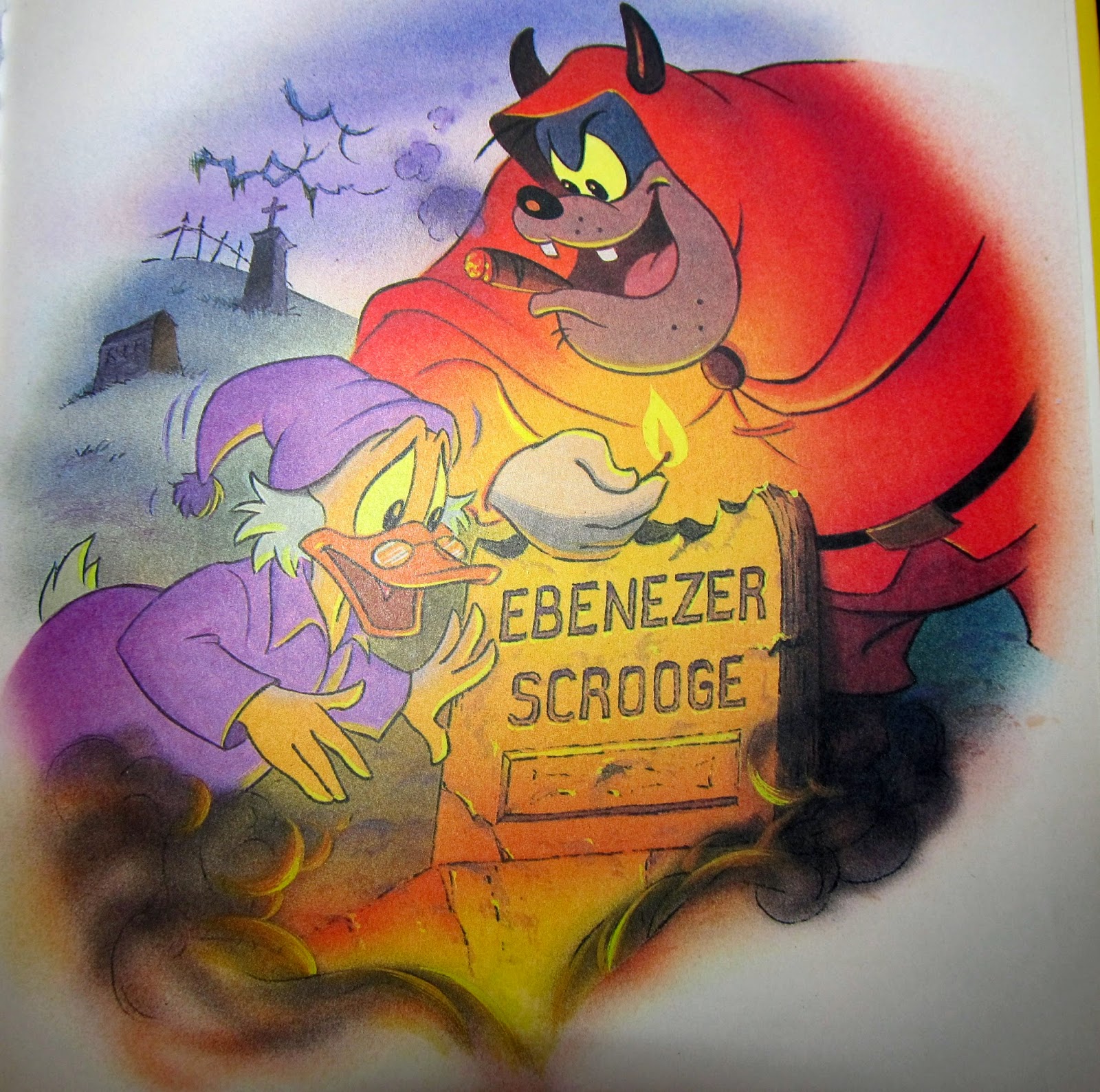 We still get all of the classic scenes starring the spirits and Scrooge before redemption finally sinks in. This is a great adaptation of the classic TV special and it makes for a nice shivery Creepmas kids' tale for the Christmas season!

Next up we have this pair of books by horror novelist Dean Koontz. He wrote two books detailing the harrowing Hallowdays adventures of Charlotte and Emily. The girls have to contend with not one but two strange, sinister doppelgangers of Old Saint Nick. 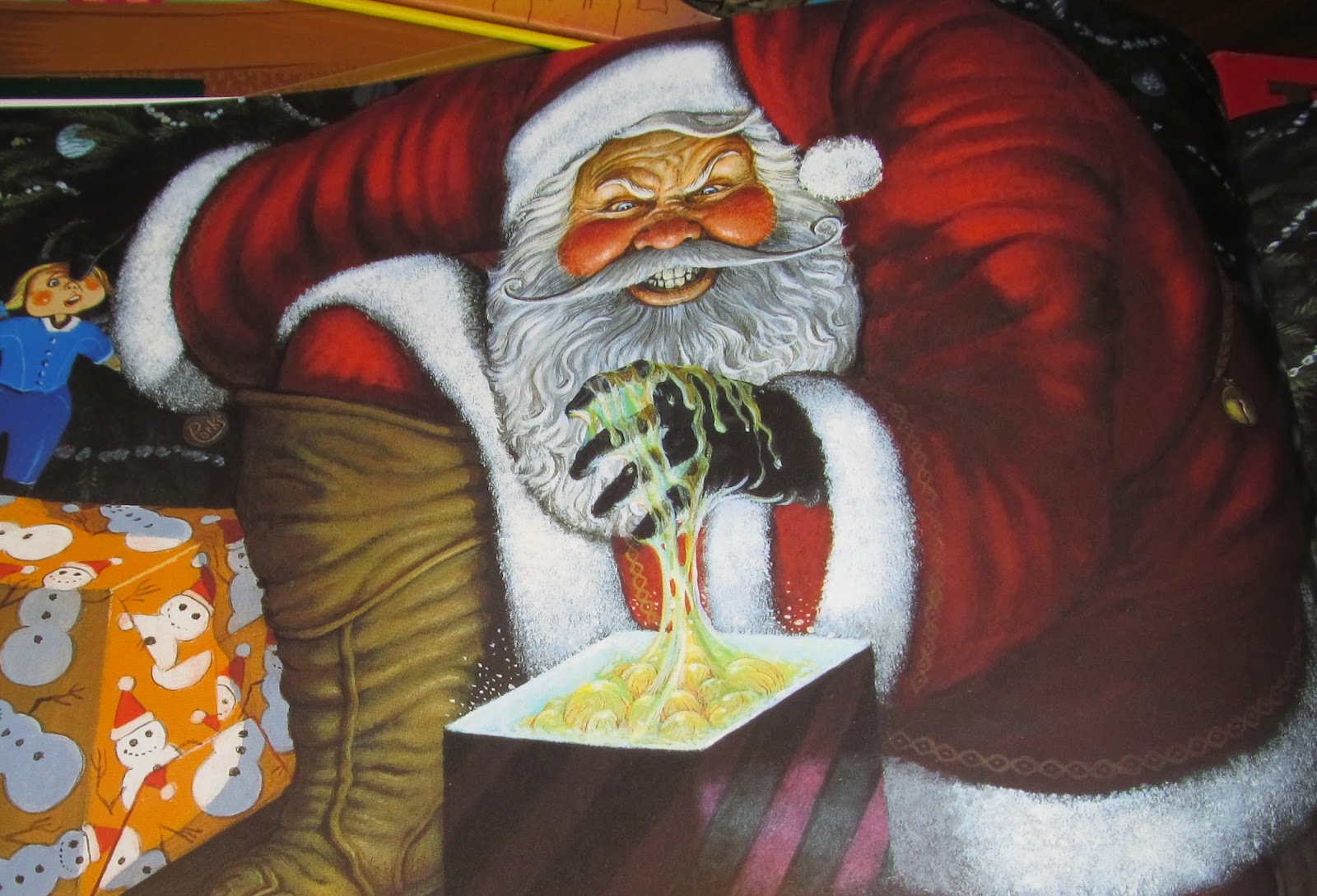 In the first book, Santa's Twin we meet Bob, the off-kilter, mischief-and-mayhem making evil twin of Santa Claus. Deep down Bob is mainly misunderstood and out to get attention, but for the first 75% of the book we get no sense of this whatsoever as Bob wreck's people's homes, swaps out good gifts for horrific ones like the one pictured above, and threatens to eat the families of the reindeer to gain their complicity in assisting him in his crimes. 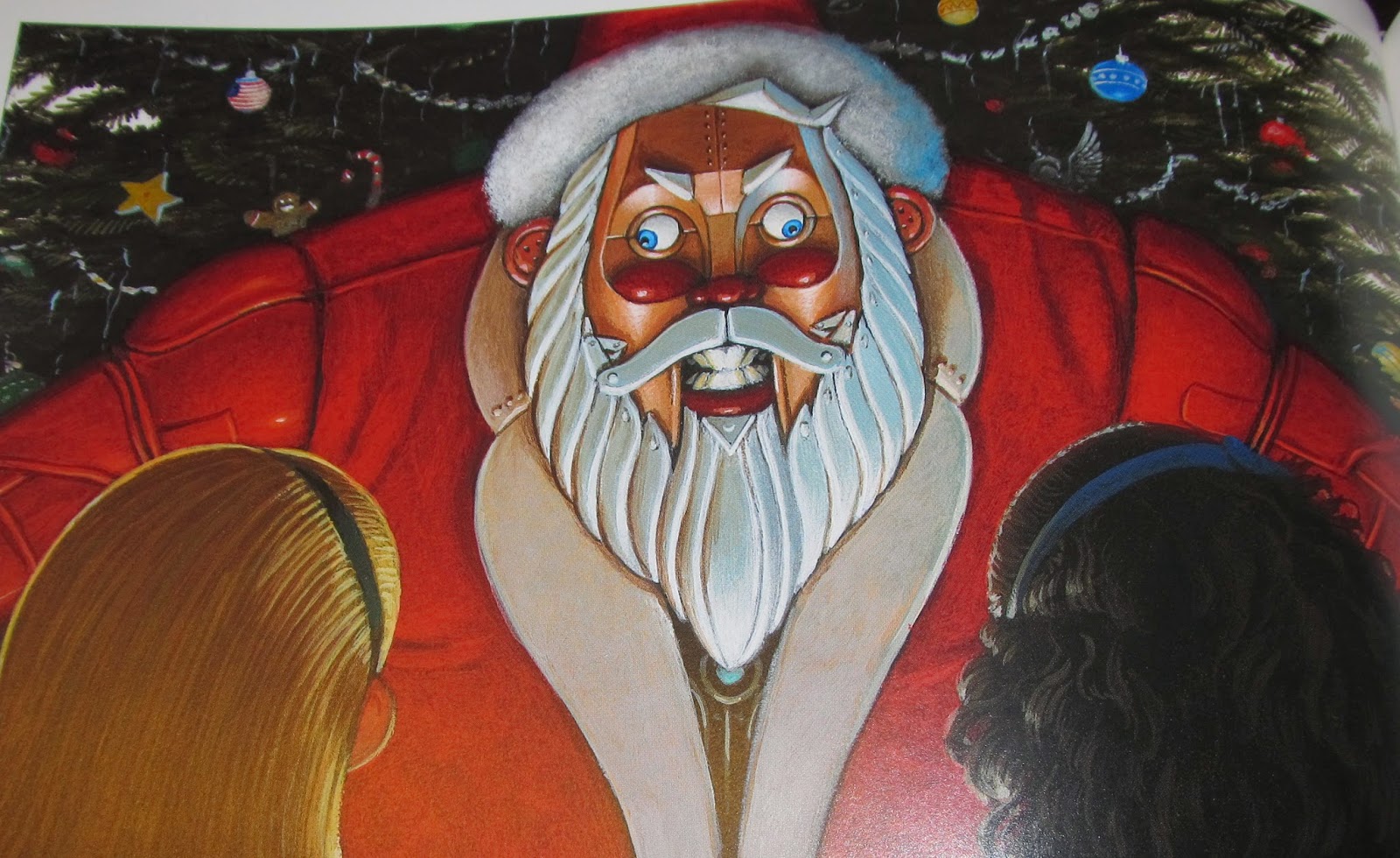 In the sequel, Robot Santa Bob has begun assisting Santa in his yearly duties, and builds a robotic Santa to help deliver gifts. Things go awry and the (more than a little creepy) robot starts creating Christmas Chaos of its own. Instead of eating cookies, he eats the plate (and some of the furniture) they sit on. Instead of leaving gifts from his sack, he fills the sack with gifts from the houses he visits. And he's got a trained gorilla helping him out that kidnaps the girls' dog. But as with last year, the girls persevere and prevail and set things to right. 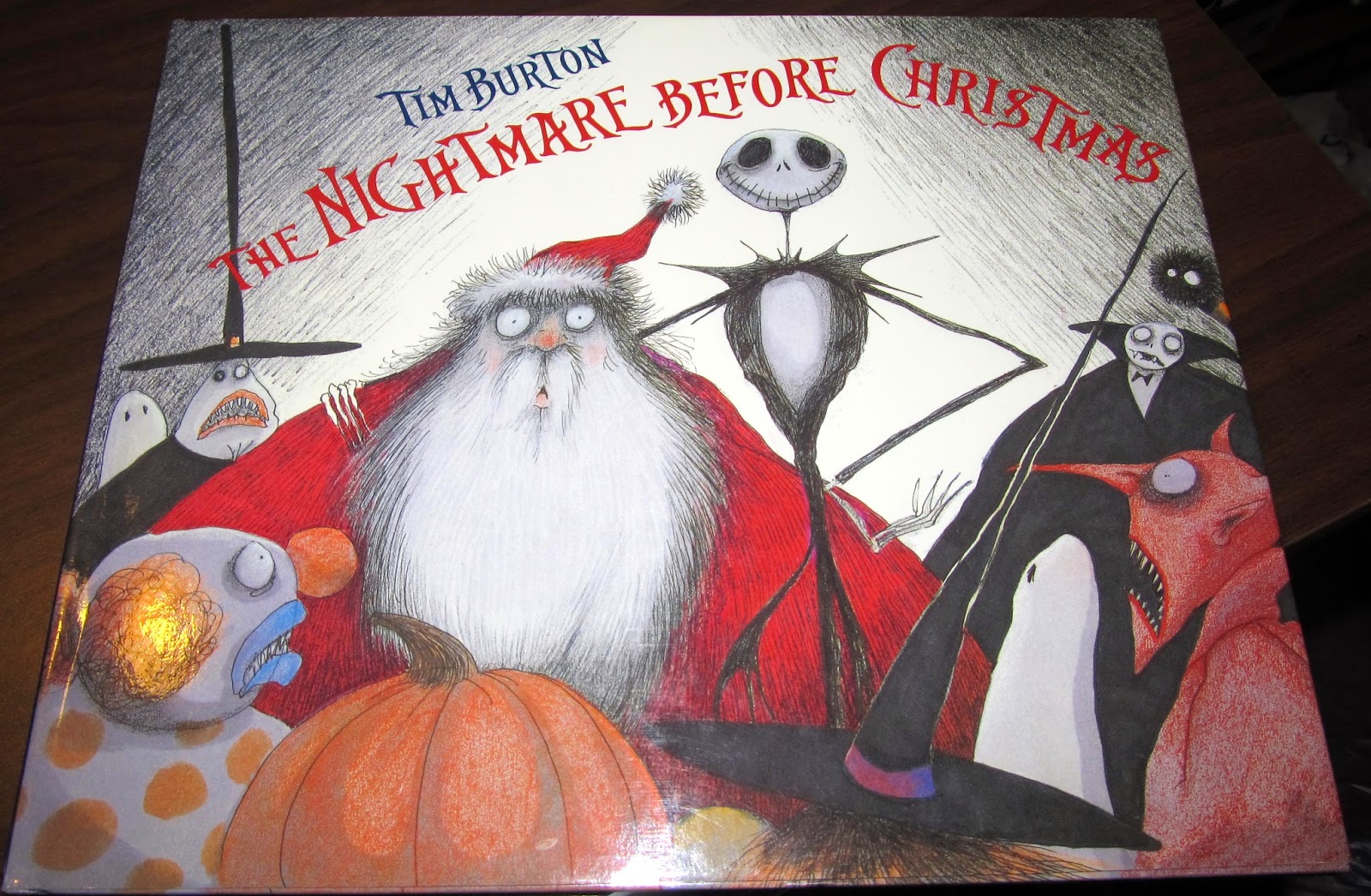 Saving the best for last, we have quite possibly the book that DEFINES the concept of Creepmas in its own Merrilyy-Terrifying way. The Nightmare Before Christmas written and illustrated by Tim Burton! This is the book that the stop-motion animated Disney movie directed by Henry Selick was based on. 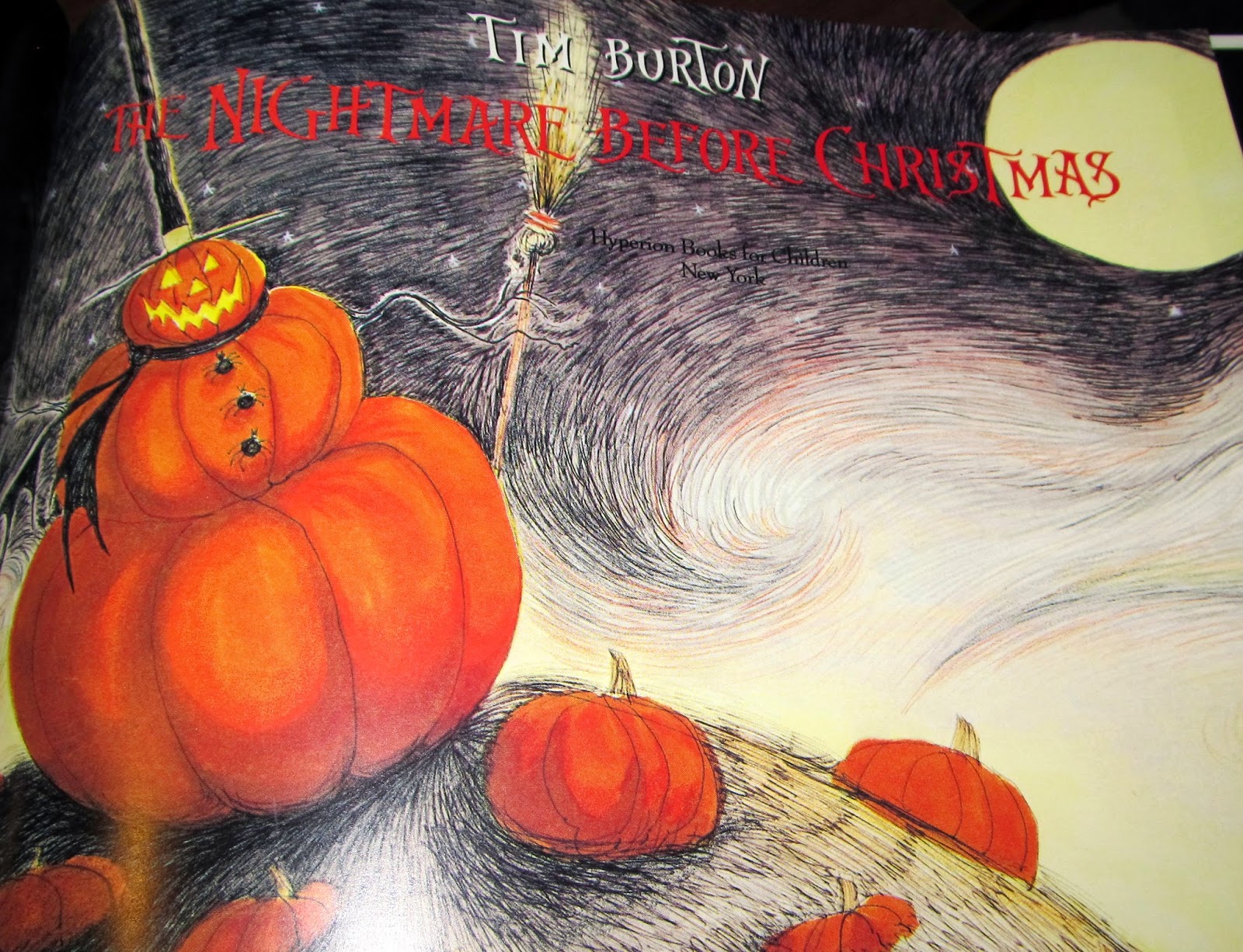 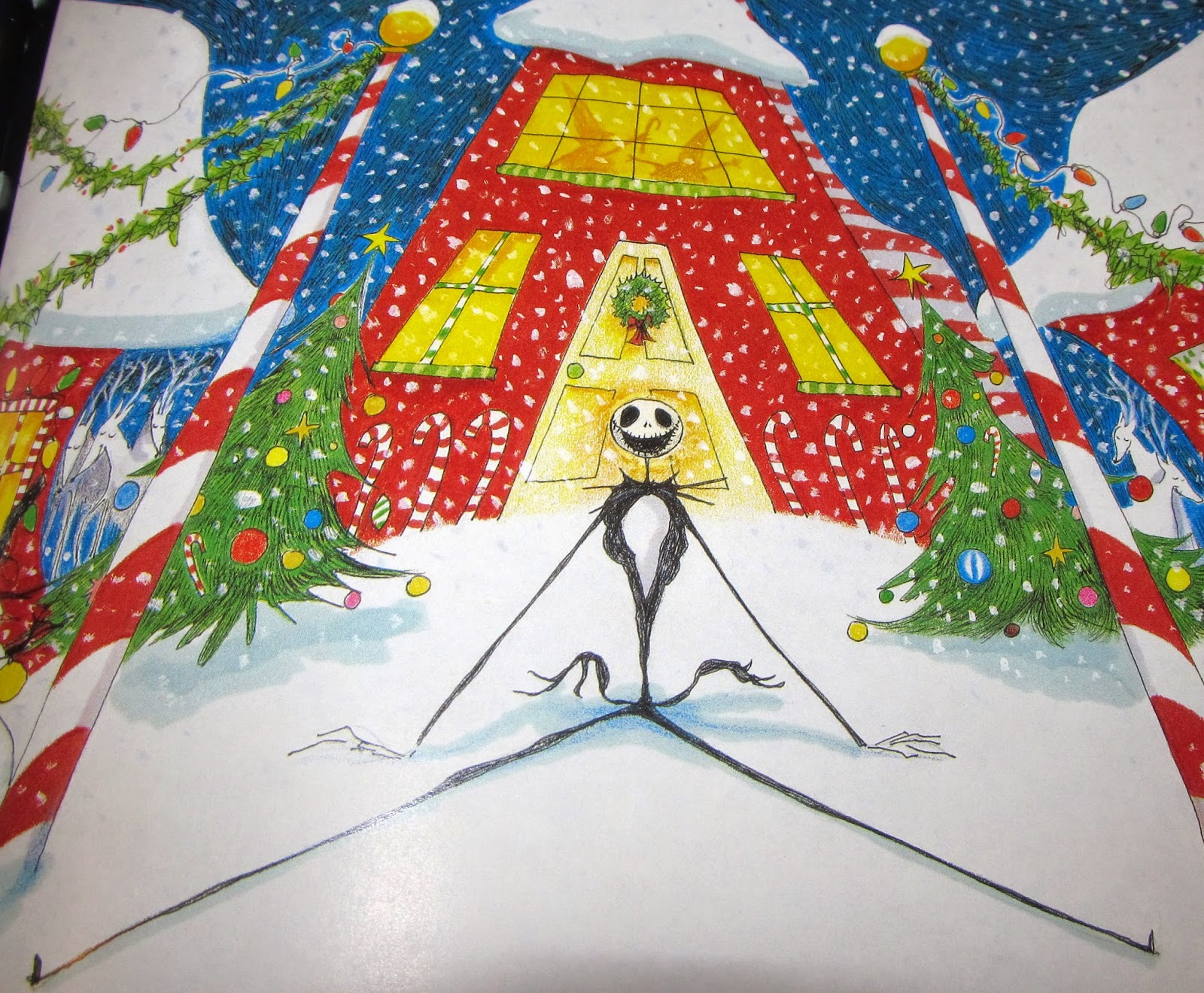 The entire book is a fun blend of both Halloween and Christmas imagery. If you're at all familiar with the film, then the themes of the book will be no surprise to you. Although there are no romantic story threads or villainous Boogie-Men trying to eat Santa. Those subplots are missed but traded out for a sense of focus that a book for children needs.

The imagery is festive and spooky and beautiful for it. 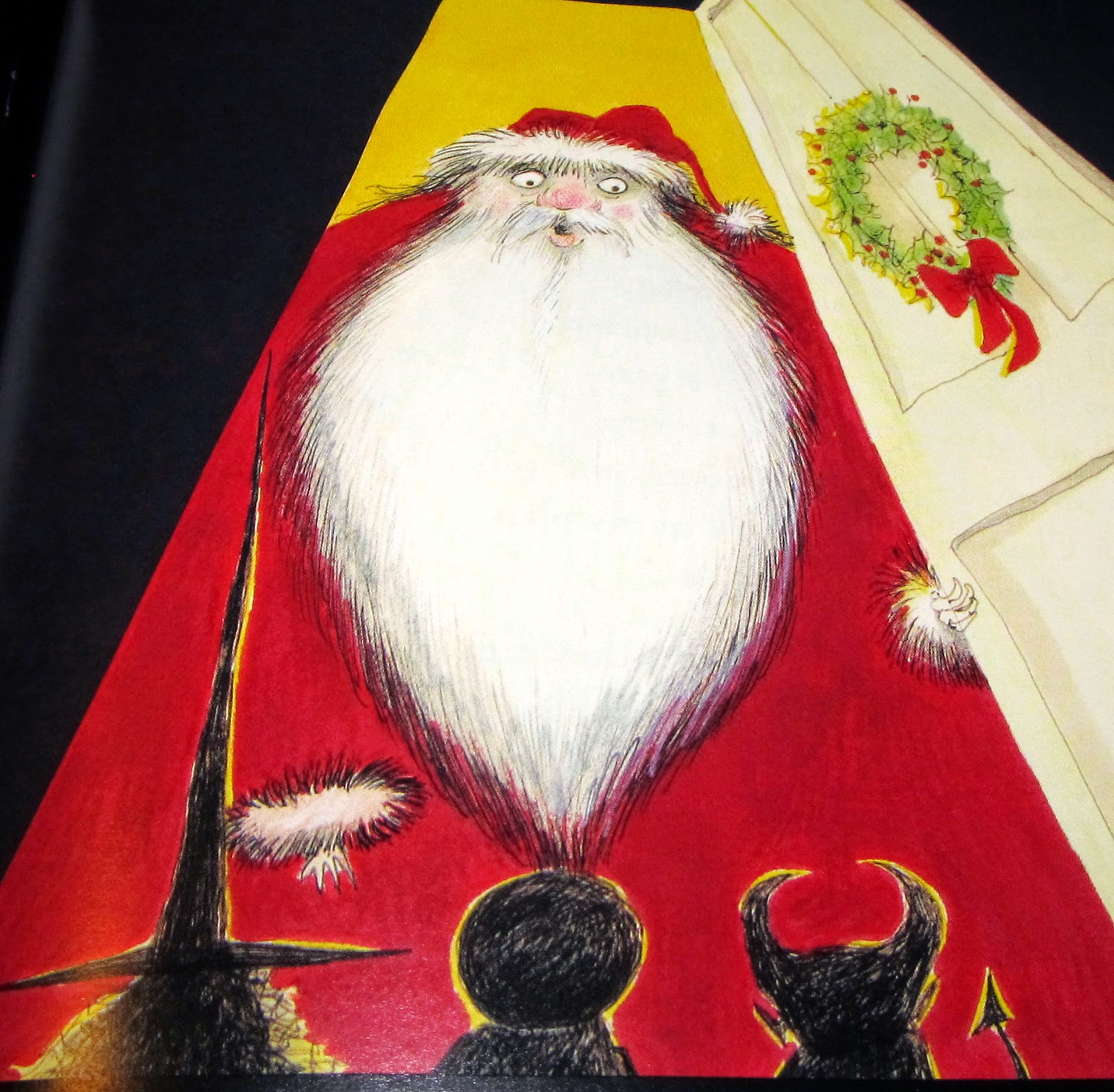 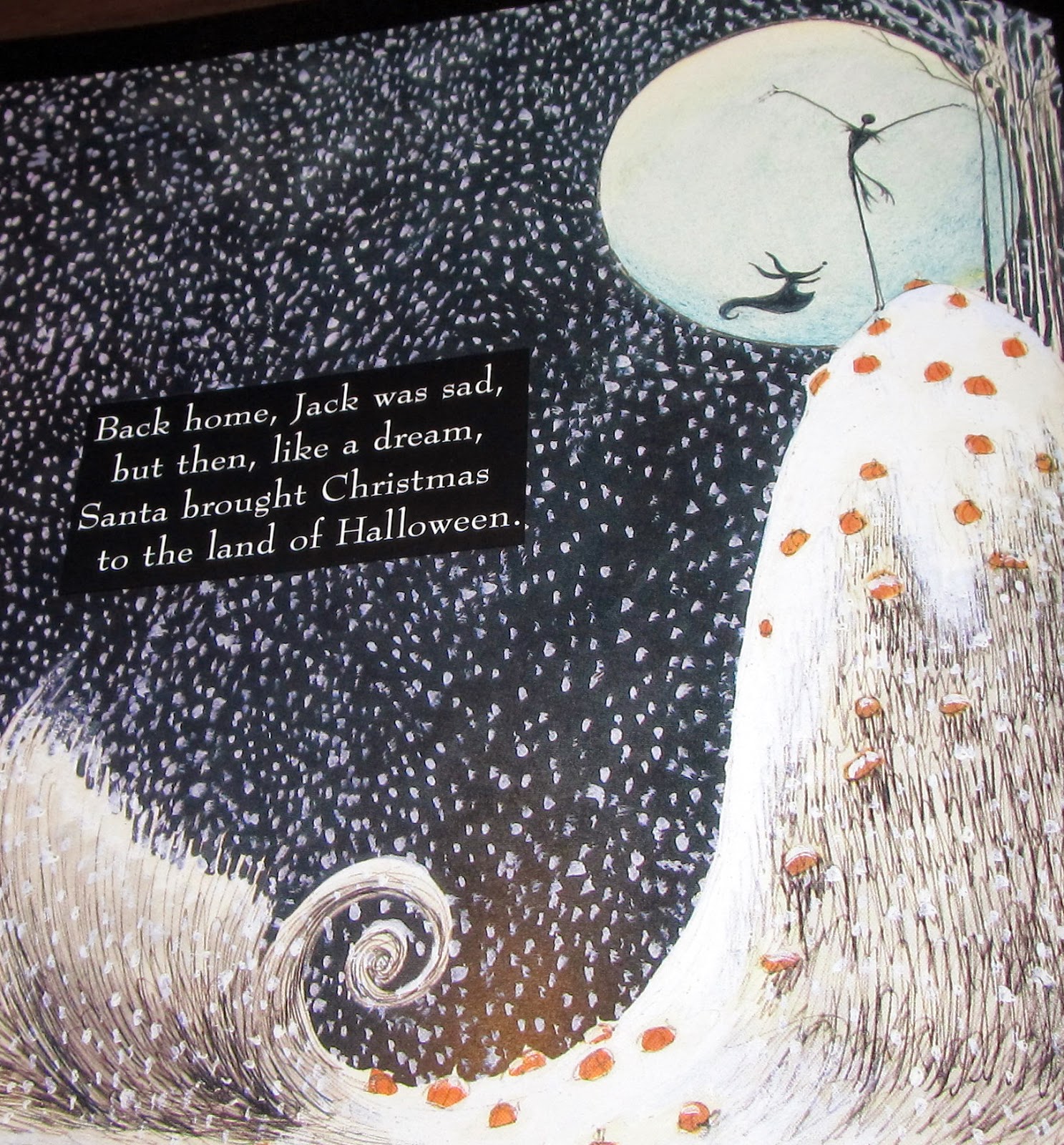 All the elements are there: the red and green and black and white and orange. The snow and the pumpkins. The Creepy and the Christmas. The Creepmas!!!

That's it for tonight! So tuck your kiddies into bed and crack the spine on one of these delightful, frightful feasts for the imagination!

Happy 13 days of Creepmas! I'll be back tomorrow with another entry in the countdown, which may or may not involve a Goodwill Goody! Until then, Happy Hunting!
Posted by Derek Ash at 5:20 PM