12 Days of Christmas Cassettes: 5 The Nutcracker

Tonight I'm featuring only one cassette on its own. But it is arguably a collection of music that has had one of the biggest impacts on my family and how we celebrate (or at least decorate for) Christmas. It is the music of Pyotr Tchaikovsky's "The Nutcracker Suite" 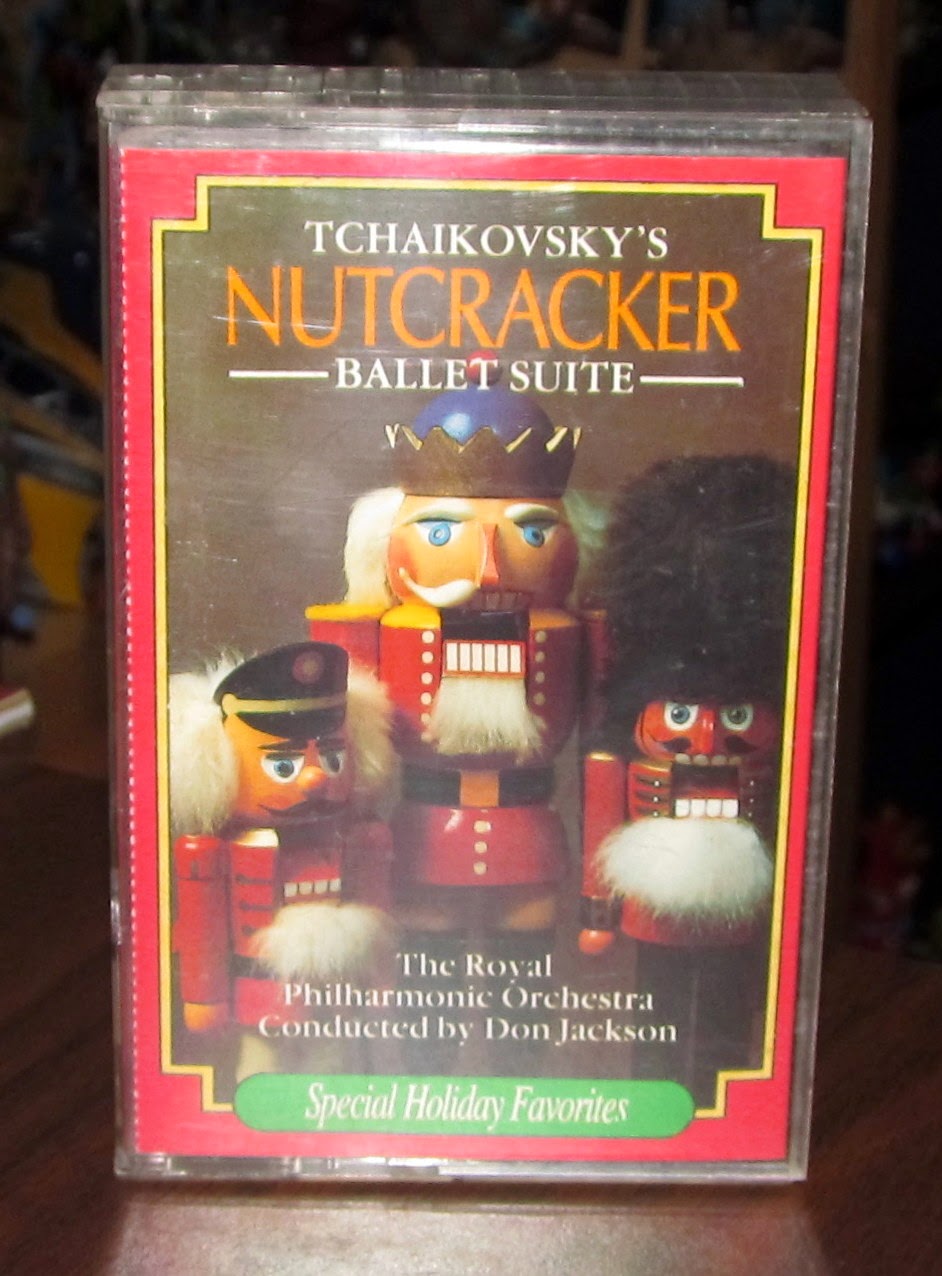 I'm a big fan of the music from the Nutcracker. The Dance of the Sugar Plum Fairy, The Chocolate Spanish Dance, The March, all of these and more are famous pieces of music that have woven their way into Christmas as naturally as Santa Claus or the star on the tree.

We used to read the storybook to my daughter when she was very young, and because of this, when she saw the nutcrackers on sale in department stores, she would get very excited. So beginning when she was just 3 years old, we began collecting Nutcrackers. We decided that every year we would add a new Nutcracker to the shelf, and so began a tradition for our family that lasts until today. We've been collecting them for a total of twelve Christmases (although there have been two years out of those twelve when two Nutcrackers have been added to the collection instead of just one) and they now take up an entire shelf (and then some) to themselves every Christmas season. 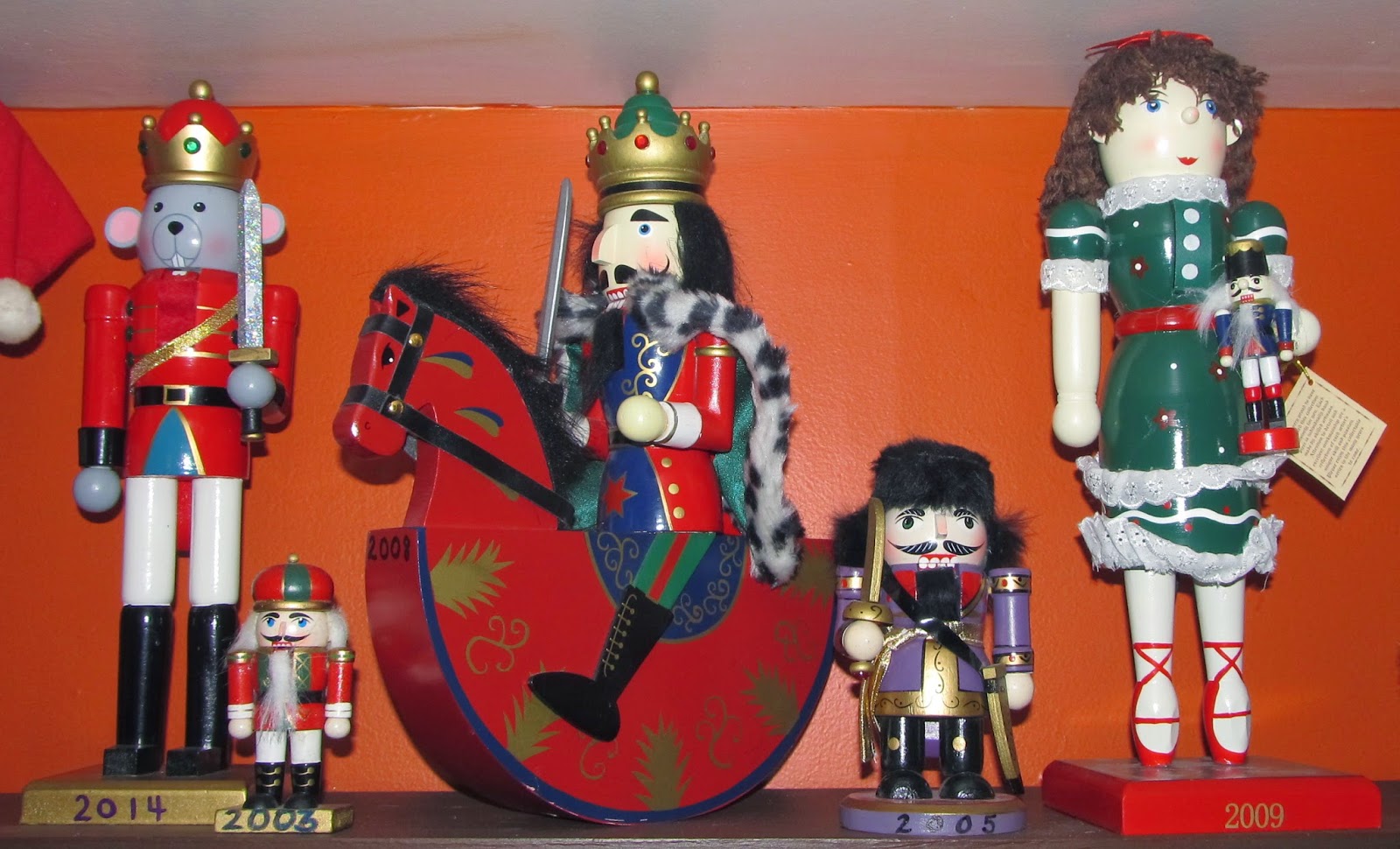 So the first Nutcracker we bought was purchased in 2003. From 2003 to 2007 the Nutcrackers were all pretty small and fairly modest (though they ranged from traditional designs to more exotic costumes like a Russian Cossack and an Irish mandolin player) when suddenly in 2008 we got a giant one riding a rocking horse. And there was no looking back. The next year we picked up a Nutcracker ballet Clara Nutcracker, HOLDING A NUTCRACKER which I find ridiculously meta and awesome. 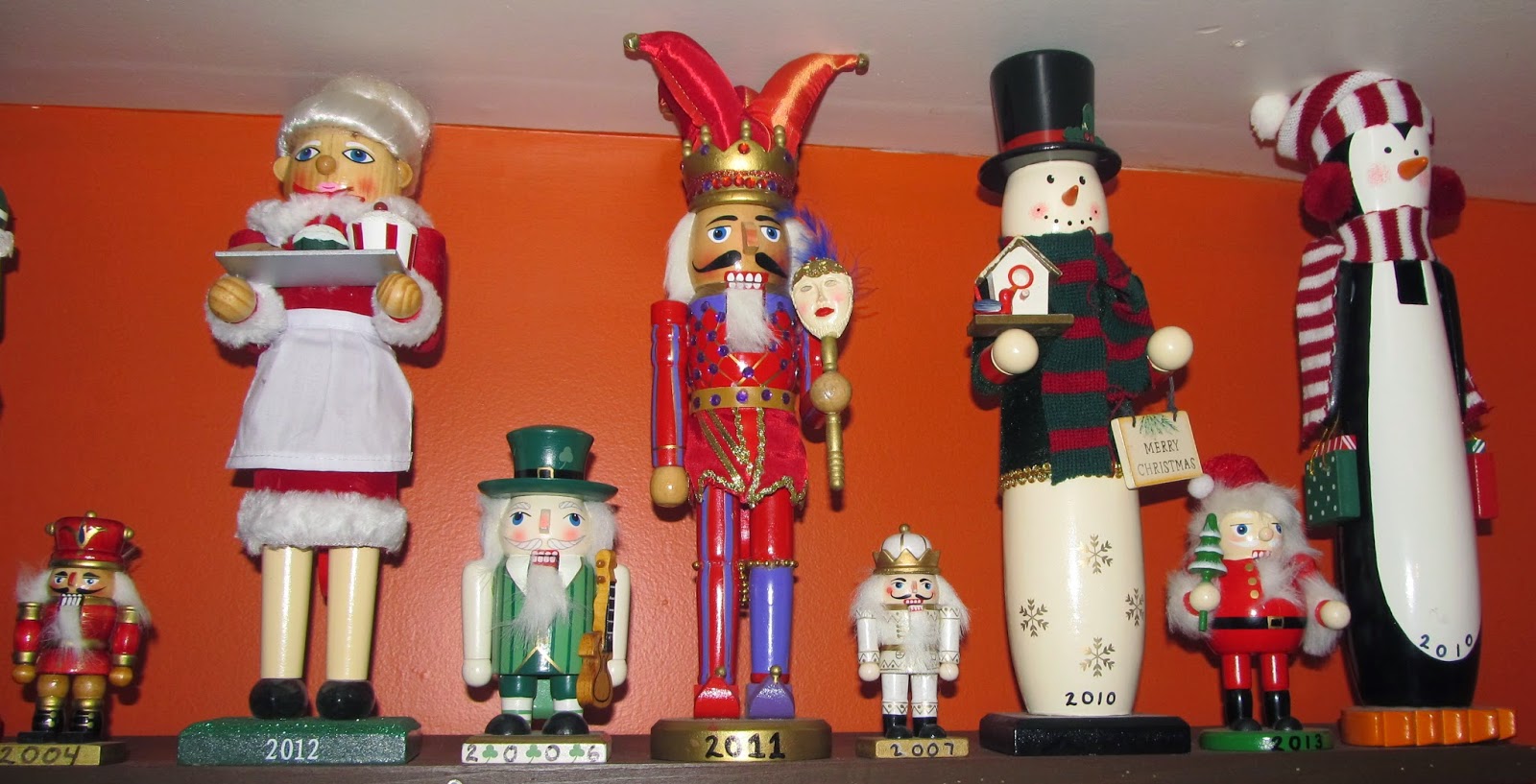 The year after we bought Clara, 2010, was the first year we could not decide on just one nutcracker, and we brought home both a Snowman and a Penguin because both were on clearance. It was 2011 when I picked out the Nutcracker on my own and decided we would be getting a court jester Nutcracker. He is still to this day my favorite. 2012 Mrs. Claus and her tray of baked goodies came home with us. The next year, 2013, is when my two boys found a Santa Claus Nutcracker HALF THE SIZE OF MRS. CLAUS and begged and pleaded to bring him home. Despite my anal retentive tendencies and insistence that he was "the wrong scale" the Santas had it. It was this same year that I won this FABULOUS glittery and GIANT fellow at a workplace Yankee Swap:

He's too tall to actually FIT on the Nutcracker shelf, and so he sits on top of the computer directly under that shelf. His name is Captain Glitterati. Well... it is now. I just thought that up as I was writing this. But I am going to pretend that that's what I named him back when we first brought him home.

In the first picture above, and on the far left of this group shot, you can see the Nutcracker we bought this year: The Rat King! My older son was hoping for an elf Nutcracker, but we couldn't find one. And to be honest, I do wish that our Rat King had multiple heads, instead of just the one (as he is sometimes portrayed) but I'm still pretty excited to finally have one in the collection. I saw a PIRATE Nutcracker at Wal-Greens this season after we had already picked up Ratty there... but reminded myself there is always next year... and that we're going to run out of shelf space soon enough without picking up doubles EVERY year... But still... pirate... Hm. Maybe if it goes on clearance after Christmas I'll just snap it up then.

I am so insane.

But it's a tradition I'm glad we have, and when my kids are adults and they've moved away from home, I will continue to buy each of them a Nutcracker every year, to keep that tradition alive.

I'll be going right up through Christmas day itself posting, so be sure to join me back here tomorrow for more of the 12 Days of Christmas Cassettes celebration!!! Merry Christmas and Happy Hunting!
Posted by Derek Ash at 5:51 PM