I don't know about you guys, but when I think of Christmas being taken over by creepy forces, I can always start off by thinking of one movie in particular: "The Nightmare Before Christmas" starring everyone's favorite bony Pumpkin King himself, JAck Skellingtion!

Ever since I saw the film in theater back in 1993 I was in love with its hauntingly beautiful imagery. I didn't care all that much about the fact that Halloween was trying to take over Christmas. Honestly that was the least interesting aspect of the film for me. The sequences involving the denizens of Halloweentown, Sally the stitched-together girl, and Jack himself are the parts that grabbed my attention the most. In my mind Jack is pure Halloween, although arguably he is really a pure mascot of the concept of Creepmas itself.

But because I loved the visuals and Halloween characters so much, I have ever since collected Jack Skellington stuff whenever it seemed cool. I don't buy socks and notebooks and lunchboxes with the character on them, but I do buy toys and miniatures. So let me show you what I've accumulated over the years: 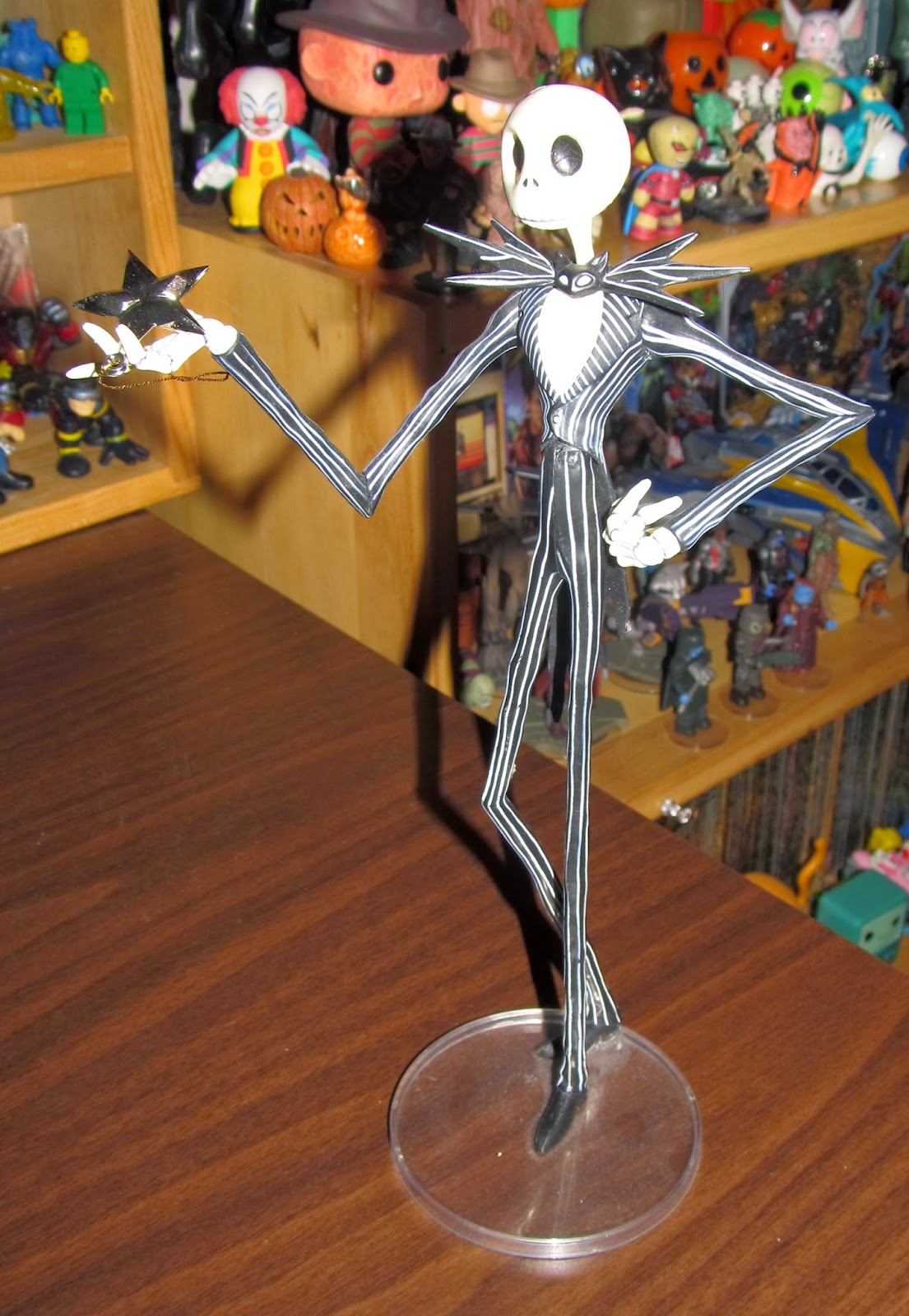 I don't remember what company produced this plastic figurine of Jack, but I received it for Christmas a couple of years ago and it is one of my absolute most treasured possessions. It captures everything I love about the character. His lanky grace, his impossibly tall and thin figure, and his expression of bemused, affable curiosity. This picture isn't the best, as the flash bleached out his face a bit... but I assure you the likeness is perfect. 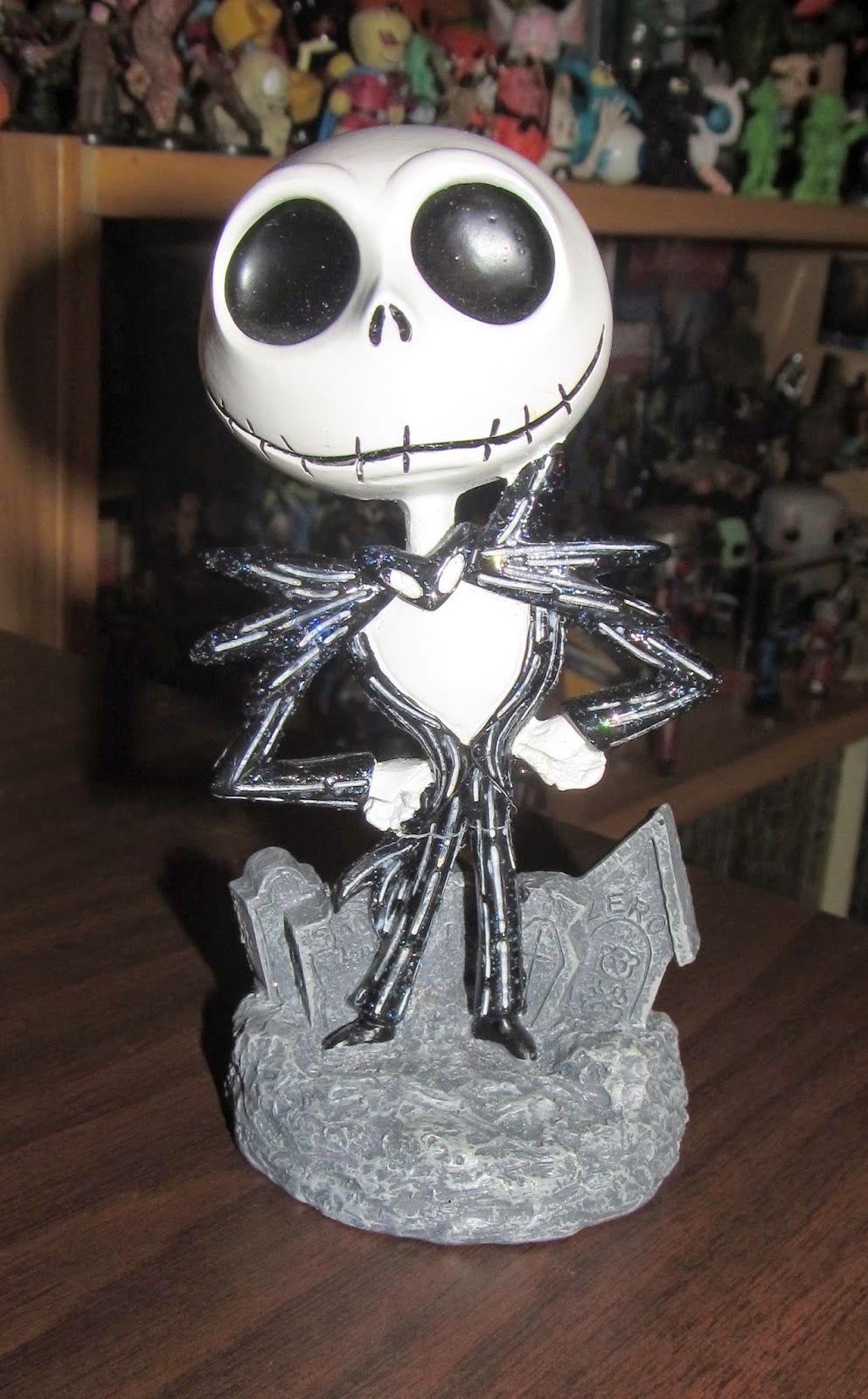 This on the other hand, is less faithful. I picked this up at Walgreens on Halloween clearance, and regretted it almost immediately. The figure has less of a chibi appearance, which is what I think they were going for... and more of a lopsided hydrocephalitic mutant look... which was not the intended effect, I'm assuming (or at least just hoping). There is GLITTER all over him... and he cracked at the waist shortly after I got him home. He appears to have some sort of internal structure holding him together or else he'd be in the trash already. 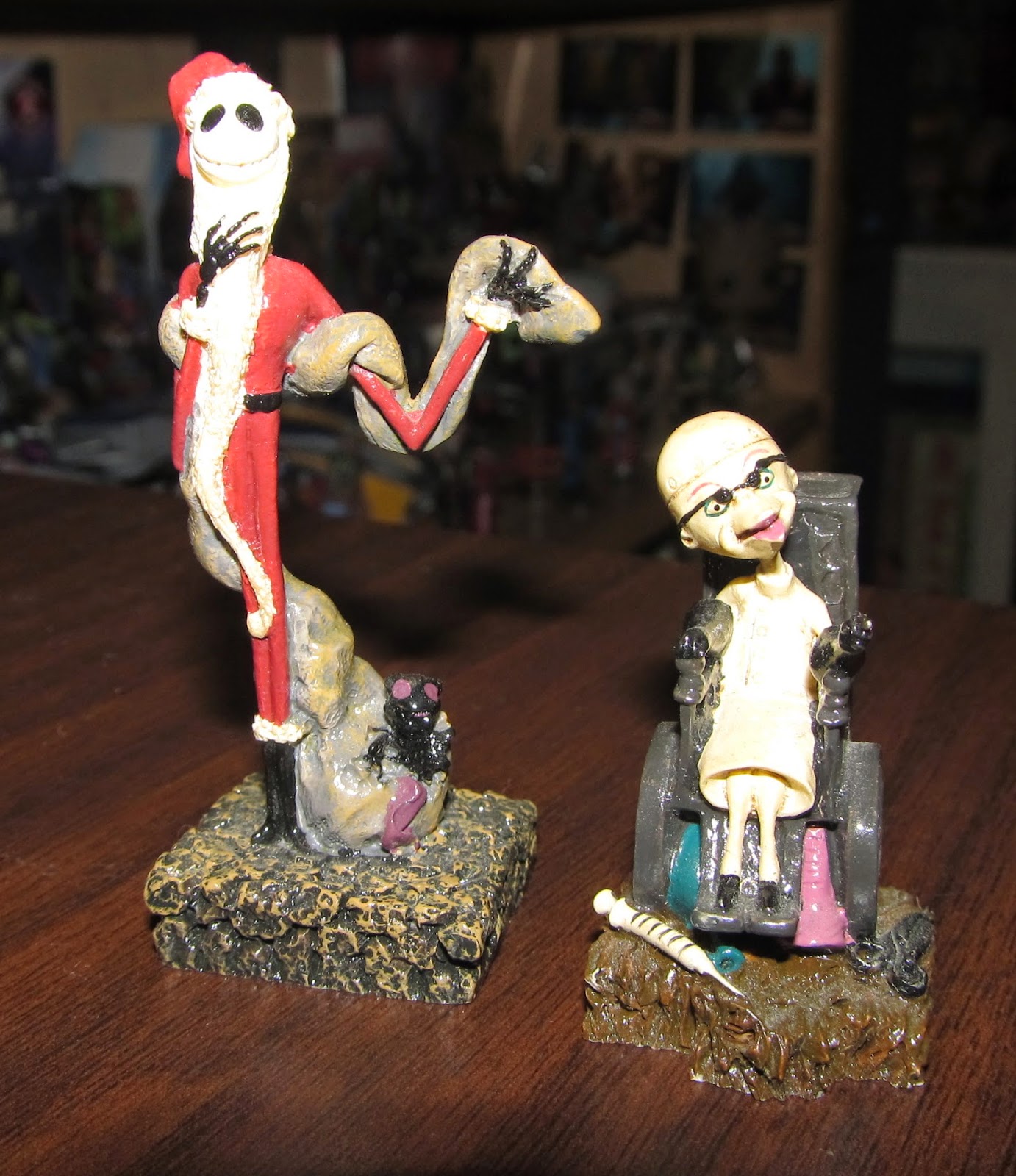 These are two mini-figures that went to a Halloweentown Christmas village set that my wife was collecting for me at one time. The other figures I had from the set have all been broken over the years, including the Mayor, Sally, and the basic Jack Skellington figure. Sandy Claws Jack and Dr. Finklestein are all that remain of those days. -Sniff-. 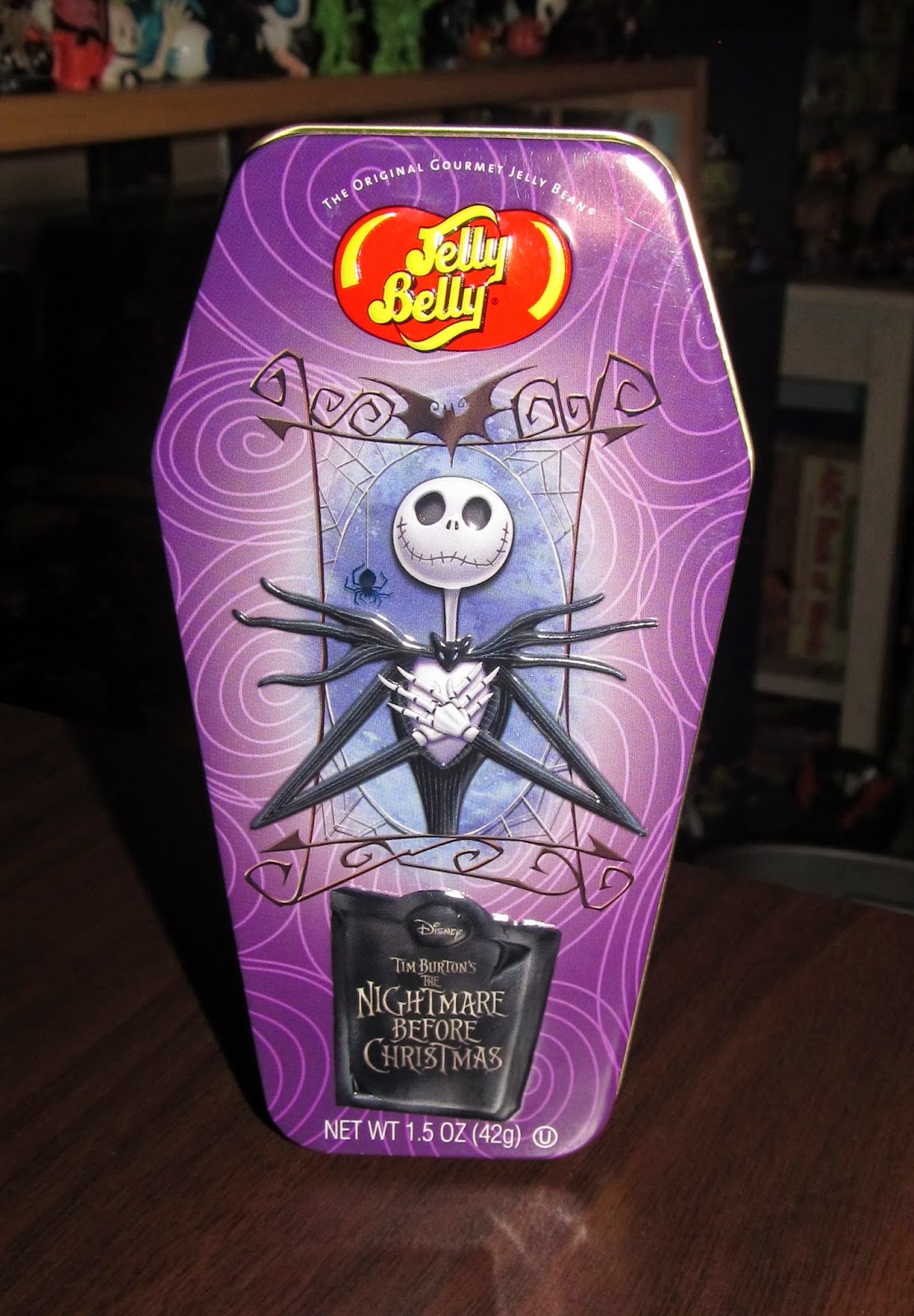 My wife got me this Jelly Belly tin last year as a stocking stuffer. She knows how much I love both properties, so a coffin shaped tin full of Jelly Belly beans and topped with Jack's grinning visage is PERFECT.

I have a couple of plush Jack Skellingtons as well. The upside down one on the left is currently missing his bat-bow-tie, and the one on the right is looking pretty darned dingy. I'm not a huge fan of beanie-baby-style toys either way (contrary to what both my Sesame Street and advertising mascot collections might suggest about me) so it depends on my mood as to whether I usually have these guys out on display or not. 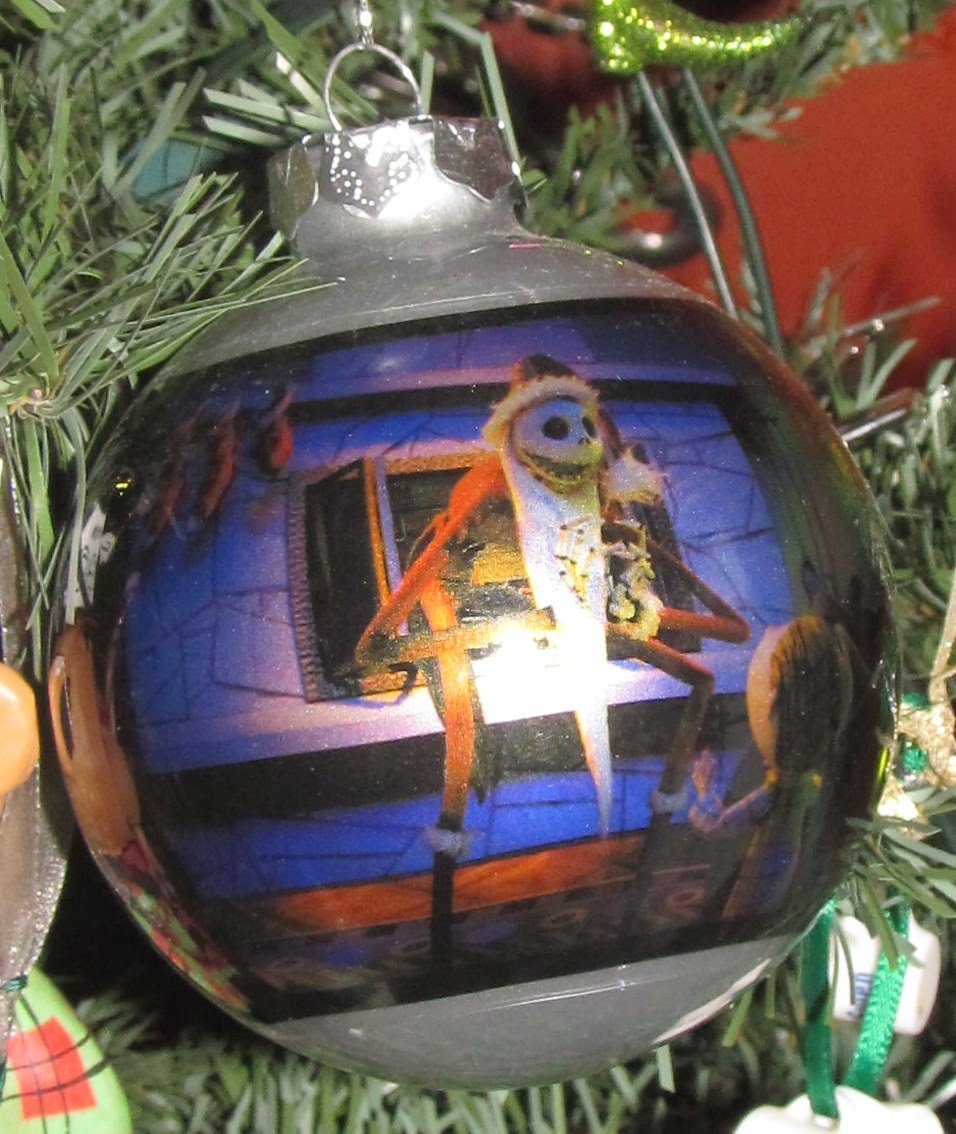 My wife got me this Christmas tree ornament a NUMBER of years ago. I'm shocked its still in one piece to be honest. It depicts Sandy Claws Jack joyfully (and unintentionally) terrifying a young child unlucky enough to have stayed up to see if Santa Claus is real or not. 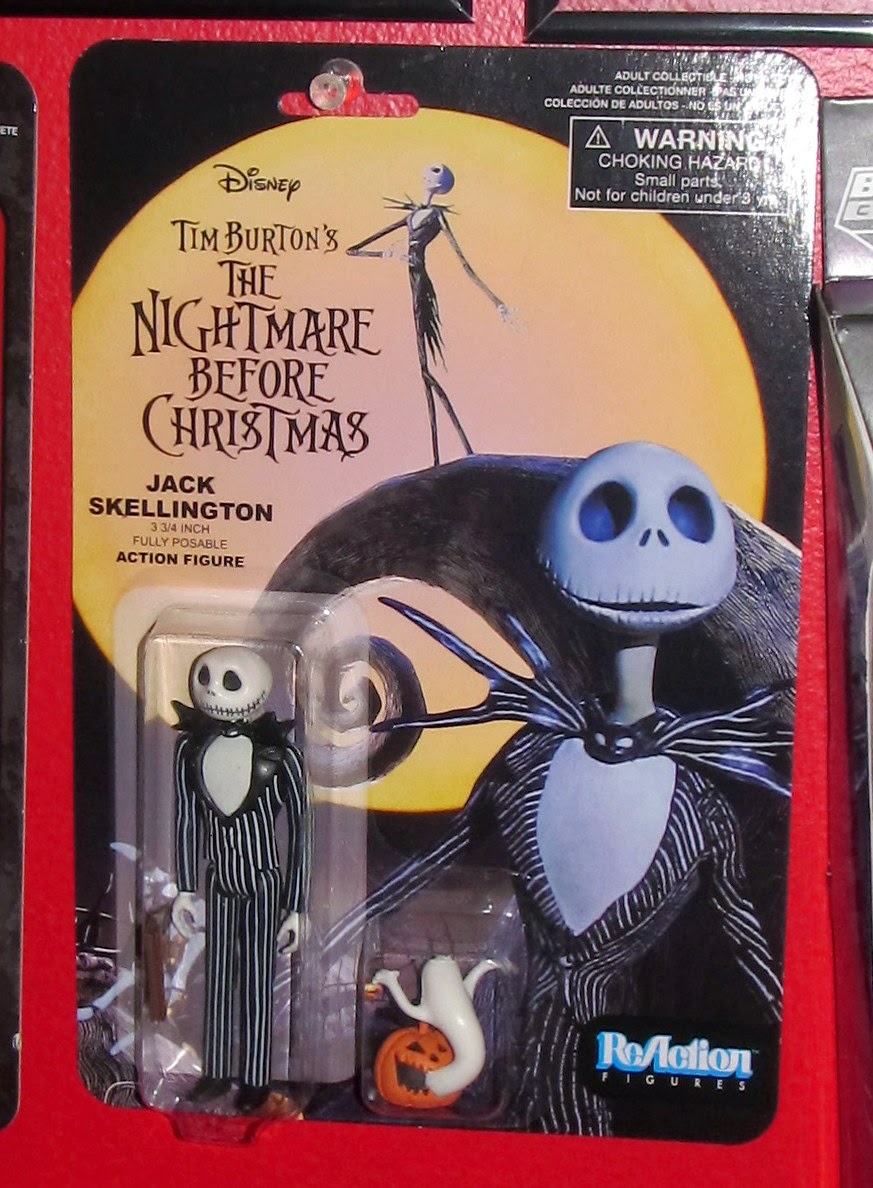 Next we have another recent addition to my collection in this Funko Jack Skellington ReAction figure. Love these ReAction guys! 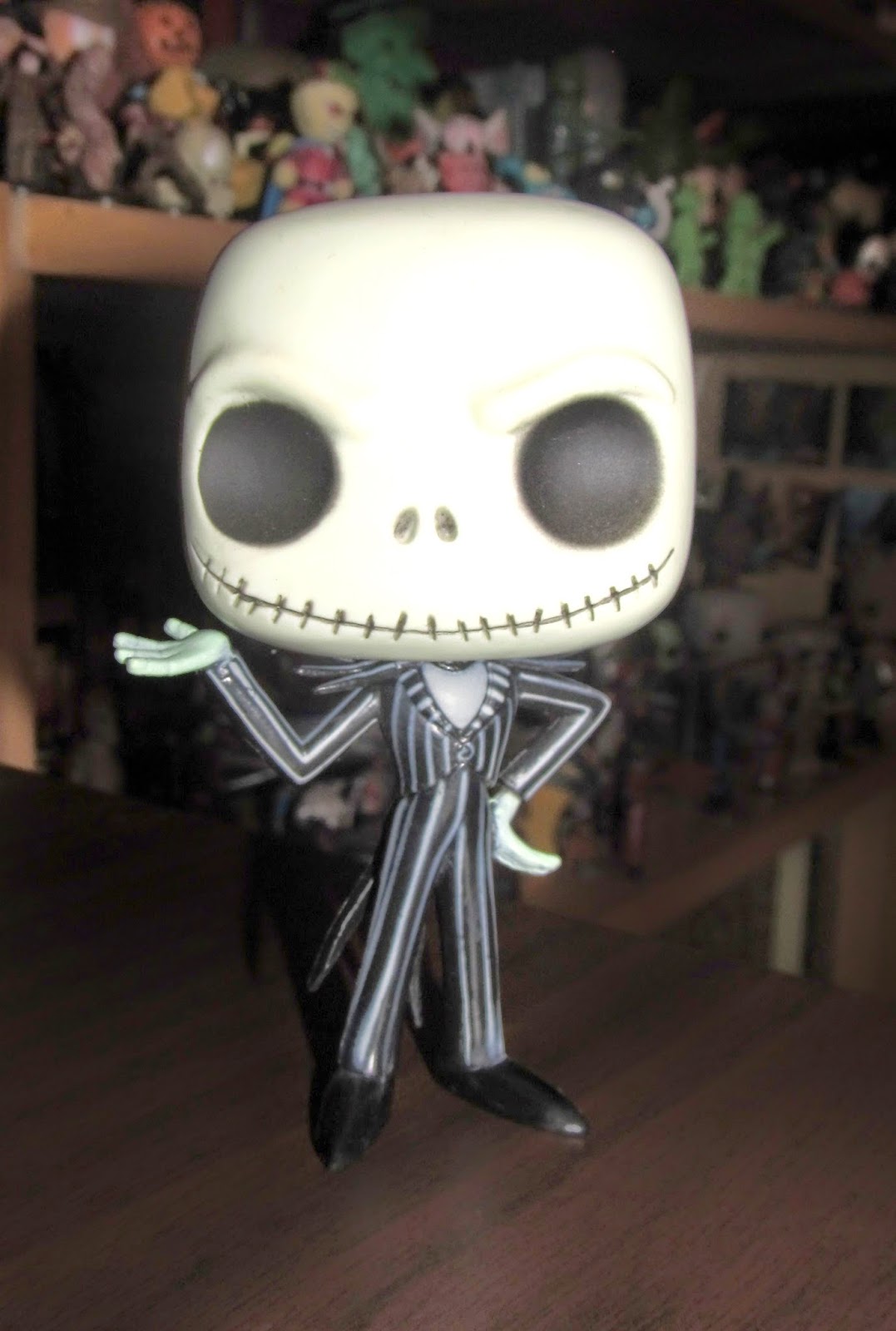 Speaking of Funko, here is my Funko POP! Jack Skellington. They have a variation of him out these days where he's done up like a Mexican Day of the Dead Sugar Skull... and I have to say I have no interest in that whatsoever. Nothing better than the classic guy himself right here. 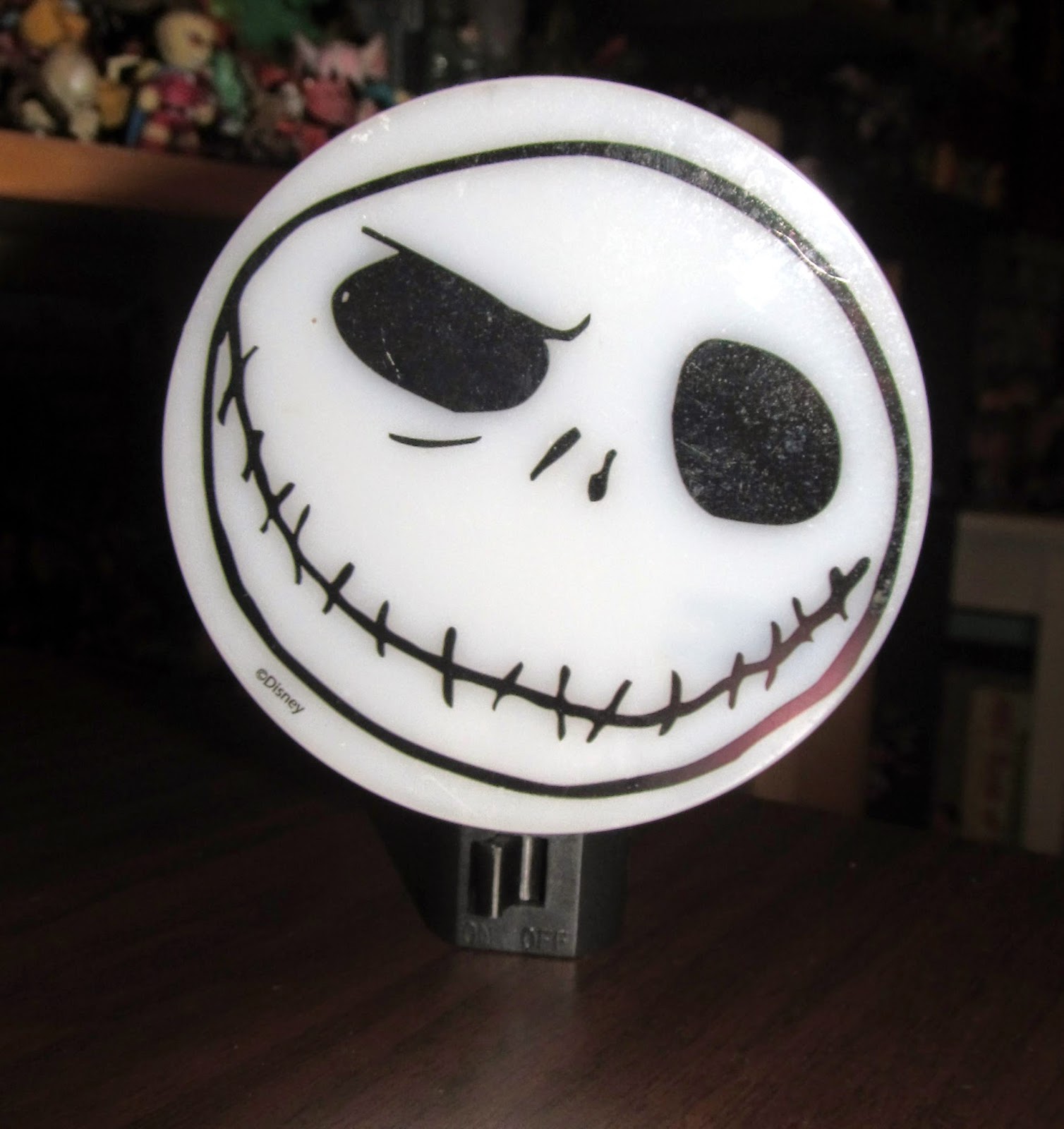 I cannot recall who would have bought this for me. Someone in my family, like my Aunt or my grandmother I'm assuming. I don't think m wife bought me this Jack Skellington nite-lite. But its still pretty nifty. We were using it in the bathroom until the kids decided it was just too terrifying. This also nixed the idea of me sticking it in their room. Unless they're bad. 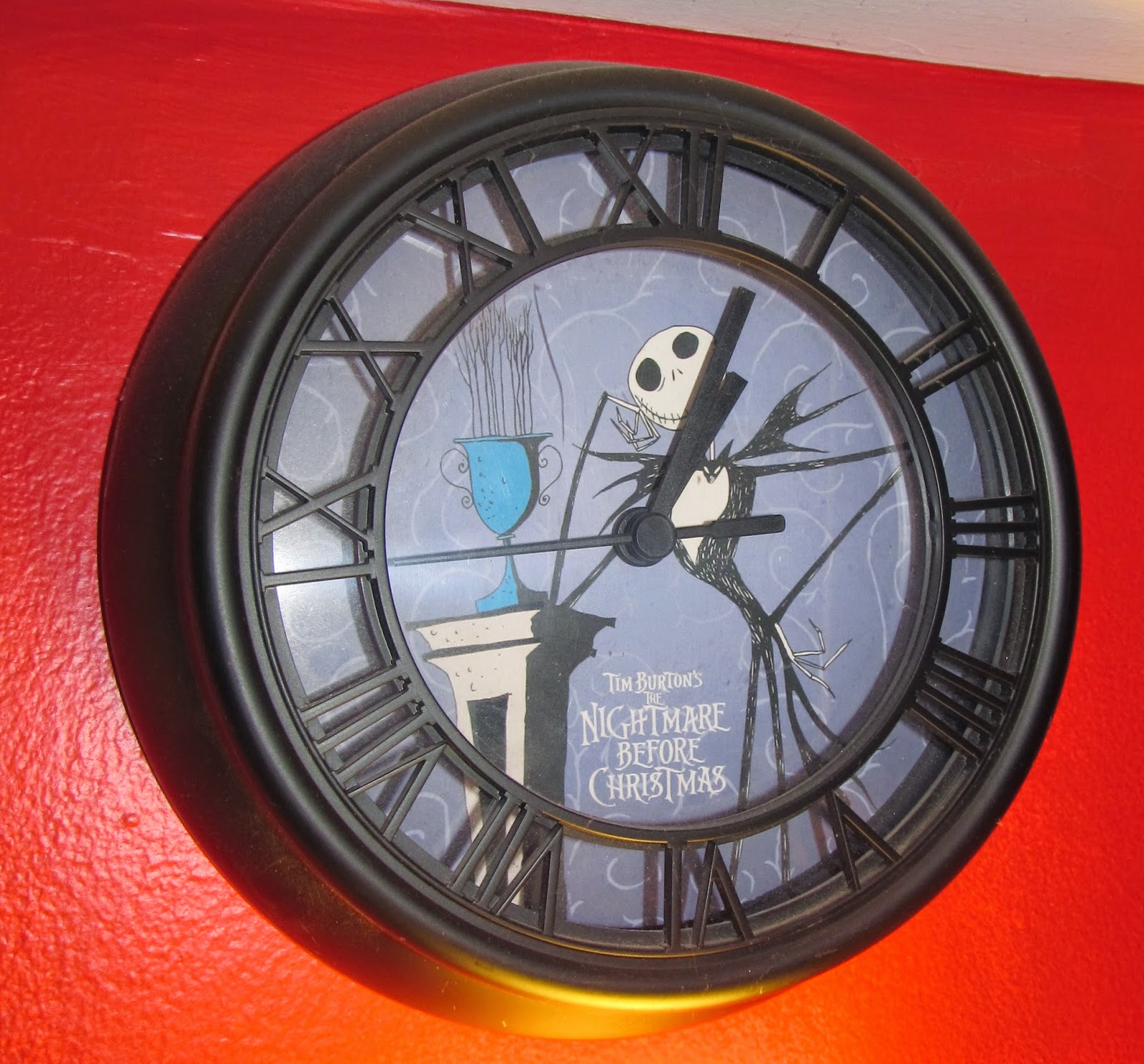 And last but not least is this Jack Skellington wall clock, which again I don't think my wife bought me... but I can't remember I've had it so long. I'm sure there are probably other items in my collection that I'm forgetting to include here... but that's it for now kiddos.


So that's it for tonight! A bunch of Jack!

Happy 13 days of Creepmas! I'll be back tomorrow with another entry in the countdown, which may or may not involve a Goodwill Goody! Until then, Happy Hunting!
Posted by Derek Ash at 6:14 PM

Email ThisBlogThis!Share to TwitterShare to FacebookShare to Pinterest
Labels: Christmas, Jack Skellington, Nightmare Before Christmas, The 13 Days of Creepmas