So today I'm mixing up the format just a little. I'm not focusing so much on track-lists and more the state of affairs in the fictional world of Christmas Sing-along characters. Both "Frostie" and Santa Claus are present for today's post... but they've also brought along their posses (possies? that doesn't look right no matter how I spell it). 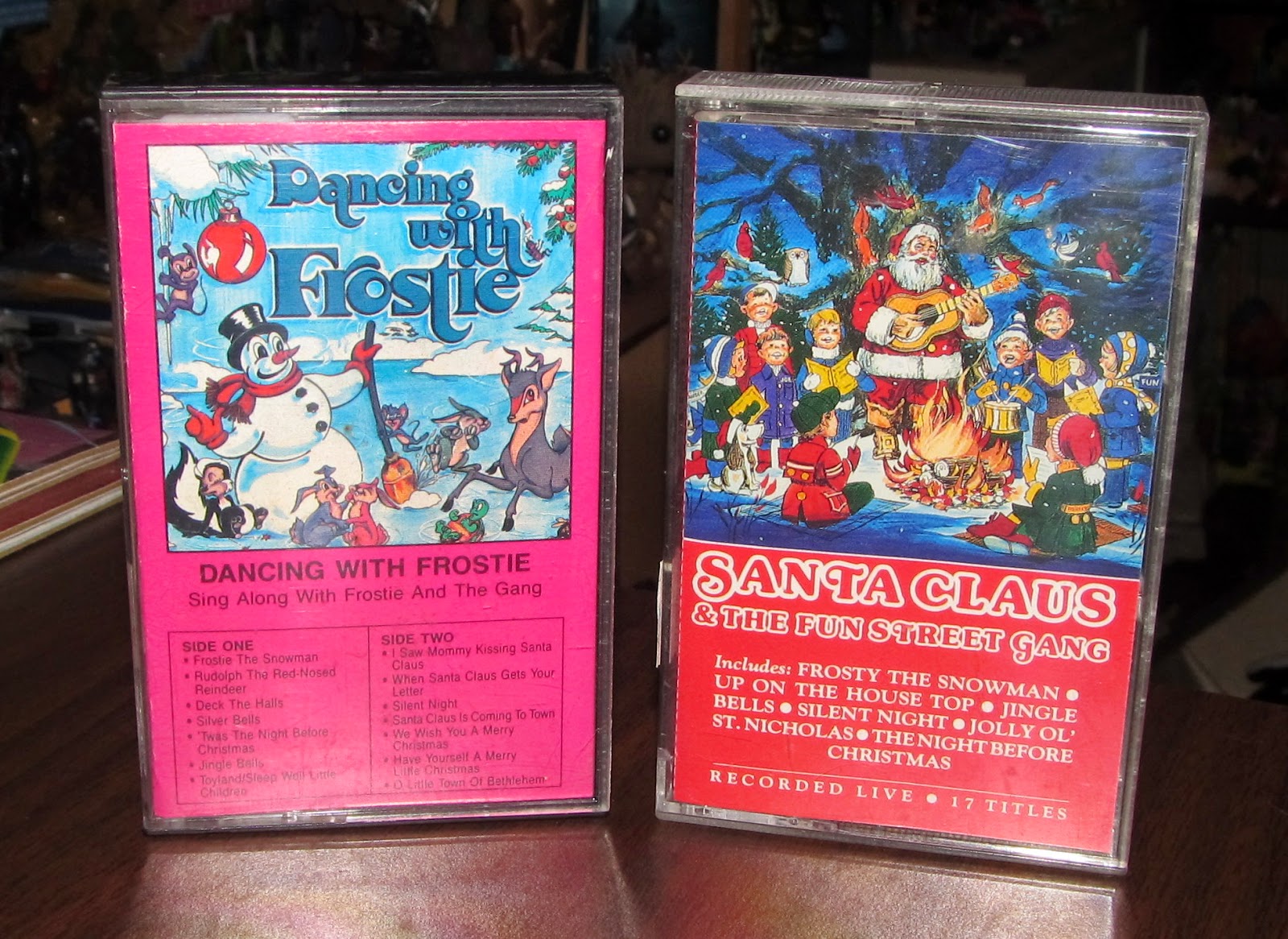 So here we have "Dancing With Frostie: Sing Along With Frostie and the Gang" and "Santa Claus & the Fun Street Gang" And here I posit this question: Which sing along "gang" comes out on top if these two decide to rumble?

Well. Let's take a look at the gangs first. First up, we have Frostie's gang. I'm not sure if they spelled his name with an "ie" to avoid some sort of copyright or what... but I find it disturbing. This gang starts off getting a few bad-ass points based on this alone. It takes one bad motherf**ker to misspell arguably THE most famous snowman's name in such an arbitrary and yet still completely homonymic way. This is how you know this gang means business. Now... in the "not-so-badass" column we have: This "gang" seems to be completely made up of woodland creatures. This, to me anyway, say more "herd" or at least "pack" rather than gang... but I'm not going to argue with however they choose to self-identify. We don't even have any wolves, cougars, bears, wolverines, or anything. We have: 2 mice, 3 rabbits, a skunk, a turtle, a deer, and what appears to be a cockroach or locust or something. Maybe a cricket? I want it to be a cockroach, honestly (it's sliding off the "h" is "with" for any of you less-eagle-eyed readers who have no f**king clue what I'm talking about) because the idea of a Christmas cockroach warms the cockles of my heart. again however, I see this as more of a stampede rather than a gang. They aren't even anthropomorphic... well.. not really. I mean, the Get-Along Gang was made up of animals... but they had thumbs so they could shiv you is cornered... you know?

The gang led by Santa Claus automatically has street cred because they have not only a name but a street name. Now, the "Fun Street" kids might not sound as tough as say... The Orphans from "Warriors" or... "The Yancy Street" kids... or those "Unholy Bastards" but you're letting the geography of this situation color you impression of the situation. Just because the kids don't live on "Broken Beer Bottle Street" doesn't mean they wouldn't still carve your nose off with one. Of course... looking at them and seeing the fact that they all appear to be Hummel figurines and/or Campbell's Soup Kids come to life doesn't help to alleviate that first impression either.

I'm not really sure where I'm going with this whole idea to be honest. I thought it was brilliantly clever when I was holding both of these tapes in my hands at Goodwill: Some sort of epic battle between the two groups... the bone of contention DEFINITELY the spelling of Frosty/Frostie's name. There would be fantastic blood matches, with the deer goring several of the singing, happy, campfire children before being taken out by the Fun Street Gang's trained army of raptors. The skunk would spray Santa, who would retaliate by smacking Frostie's animal friends with his guitar with a vicious back-swing. Frostie would end up in the fire at some point and the Fun Street gang would win (but at what cost?) because Santa. That's why.

But that's about as far as I want to go with this whole concept, honestly. I/m tired and Christmas is too close for this kind of nonsense to be dragged out too far. So this is where we are. I am CONSTANTLY questioning my life choices. Wondering where I went wrong. But that is a ponderance for another day.

I'll be going right up through Christmas day itself posting, so be sure to join me back here tomorrow for more of the 12 Days of Christmas Cassettes celebration!!! Merry Christmas and Happy Hunting!
Posted by Derek Ash at 3:18 PM