(A Quick Note: I have no idea why posting these from my iPod has made them all appear to have been posting from November 30th instead of the proper days I've been posting them, but from here on out I will be posting them from my PC rather than my iPod because that seems to solve the problem... And just when I was beginning to think I was liking the Blogger app after all. Phppplllttt!!!)

This past summer was the 30th anniversary of the film, "Gremlins". It was written by Chris Columbus, directed by Joe Dante, and executive produced by  Steven Spielberg. Is there any question as to why this movie is so beloved?

This is also a time of year when a lot of people cite "Gremlins" as one of their favorite Christmas movies. I just love the movie for what it is: a movie starring a bunch of bloodthirsty little creatures that happens to take place in a Christmas setting. I even have a couple of toys that display my love of Gremlins that reflect my natural love of Creepy Christmas trappings: 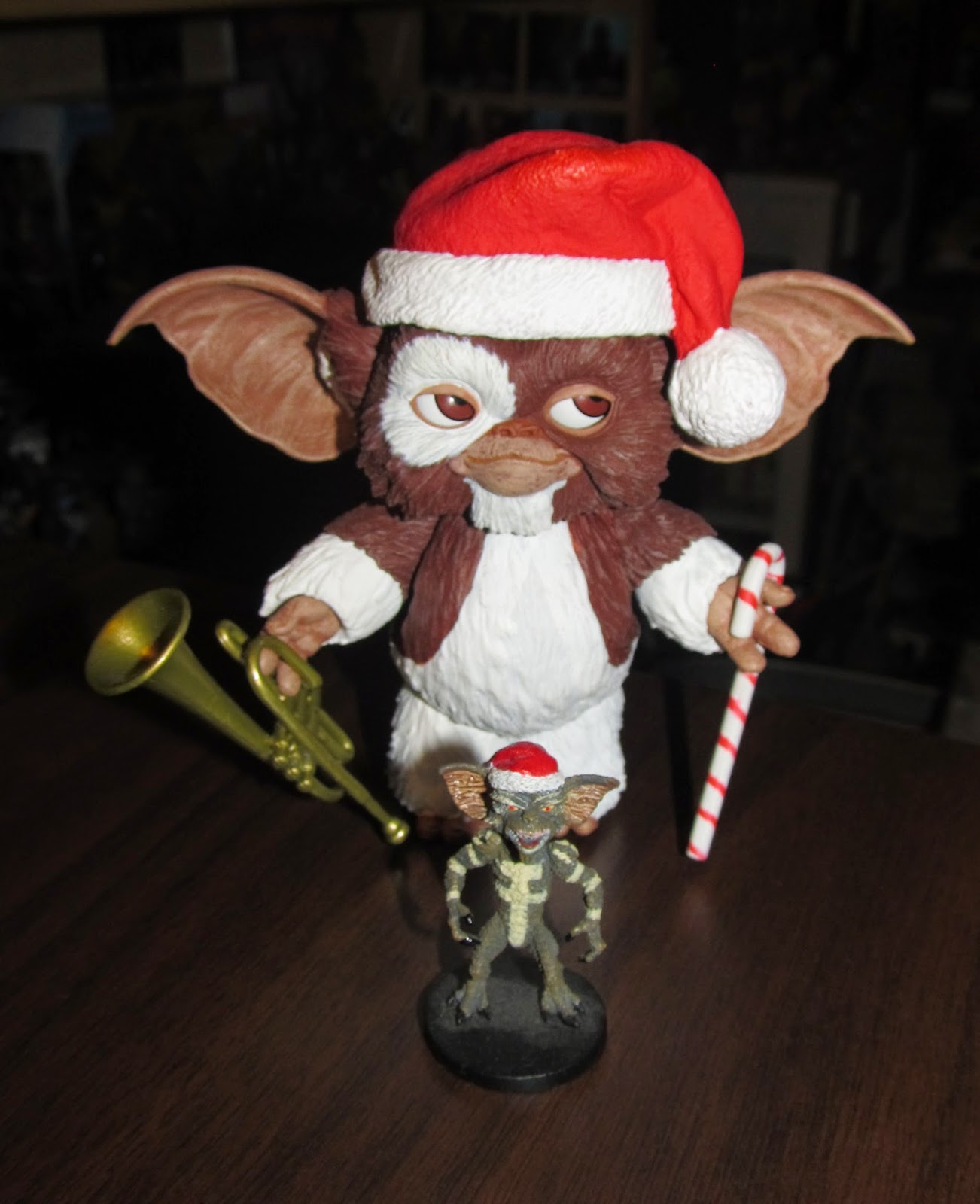 And there are some undeniable scenes in Gremlins that make Christmas an almost integral part of the film itself. Who can forget Billy's Mom getting mauled by the Christmas tree?

But believe it or not, the concept of little beasties at Christmas time goes back MUCH further than the 80's. There was an ancient Greek tradition of imps known as Kallikantzaroi that are tiny evil demons that spend the entire year hacking away at the World Tree. For the twelve days of Christmas these little jerks are freed from this task, and they run rampant, although there were plenty of ways to ward off the little evildoers. They were compelled to count the holes in a colander for instance, and so folks would leave these out on the doorsteps of their homes for the goblins to count. The trick here is that the Kallilantaroi count out loud, and if they utter the number '3' out loud (a holy number) they would destroy themselves. So they'd just sit and count to 2 over and over again until they had to hide away at dawn.

The burning of the yule log for 12 days was also thought to ward off these gremlins as well. Eventually, on the day of the Epiphany, (January 6th) the goblins are forced back to their underground dwelling to try and hack at the World Tree once more. Except, they find that the 12 days the've been absent is enough time to undo the damage they've cause all year, and they have to start all over again! Here's a video discussing more of the lore of the Kallikantzaroi:

Now, there is not one single reference in anything that I've read that there was any initial connection between the inspirations behind "Gremlins" and the myth of the Kallikantzaroi... but I find the synchronicity here just purely awesome.

Happy 13 days of Creepmas! I'll be back tomorrow with another entry in the countdown, which may or may not involve a Goodwill Goody! Until then, Happy Hunting!
Posted by Derek Ash at 1:44 PM