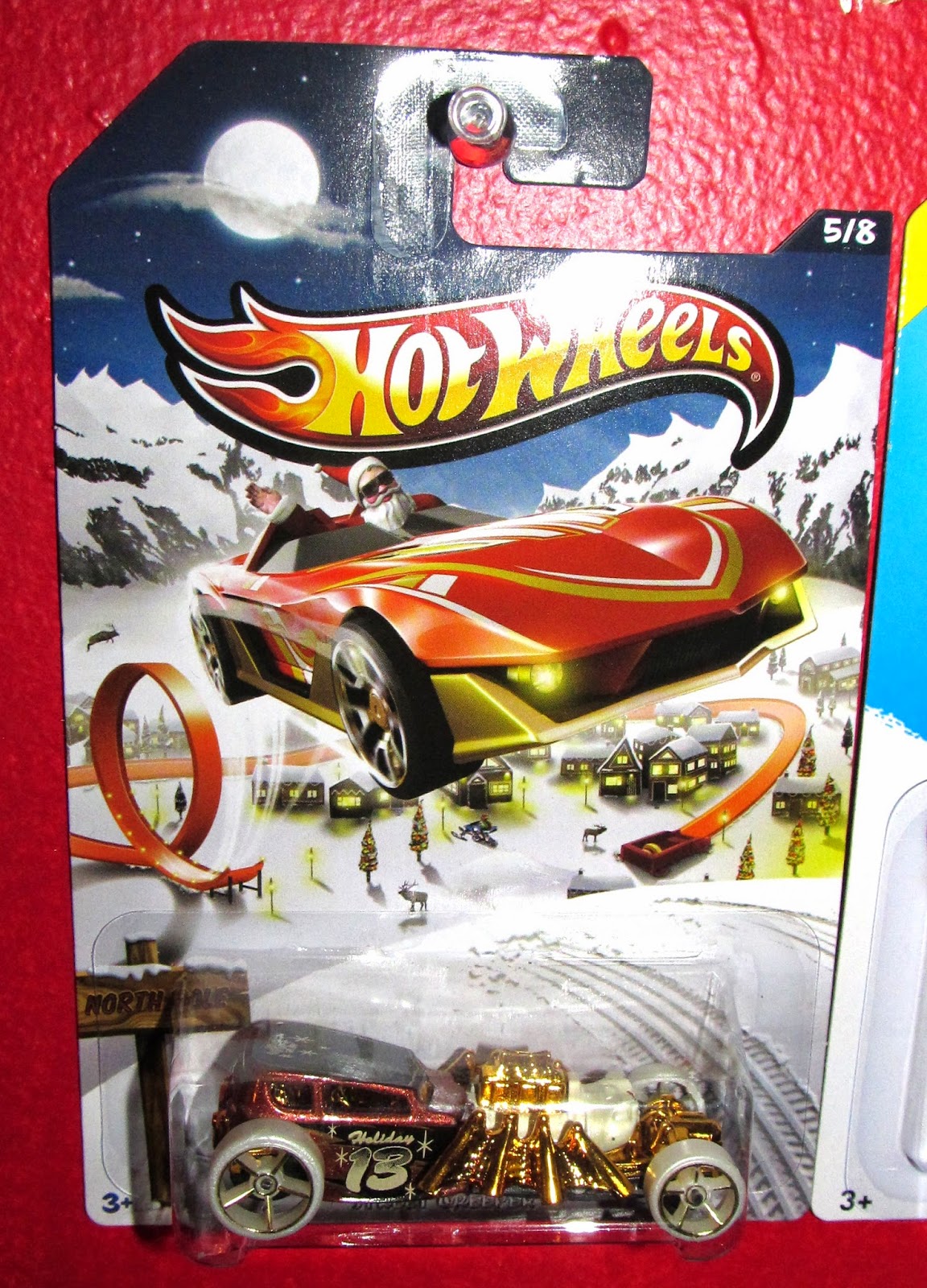 First up is this Hotwheels "Street Creeper" which they put out as as a part of their 2013 Holiday Hotwheels selection. I don't usually pick these up (though I've bought myself 2 of the 2014 selection so far...) but last year I just HAD to pick this one up because it so perfectly embodies the spirit of Creepmas! It's a horror themed Hotwheels dragster done up in Christmas colors! What's not to love? 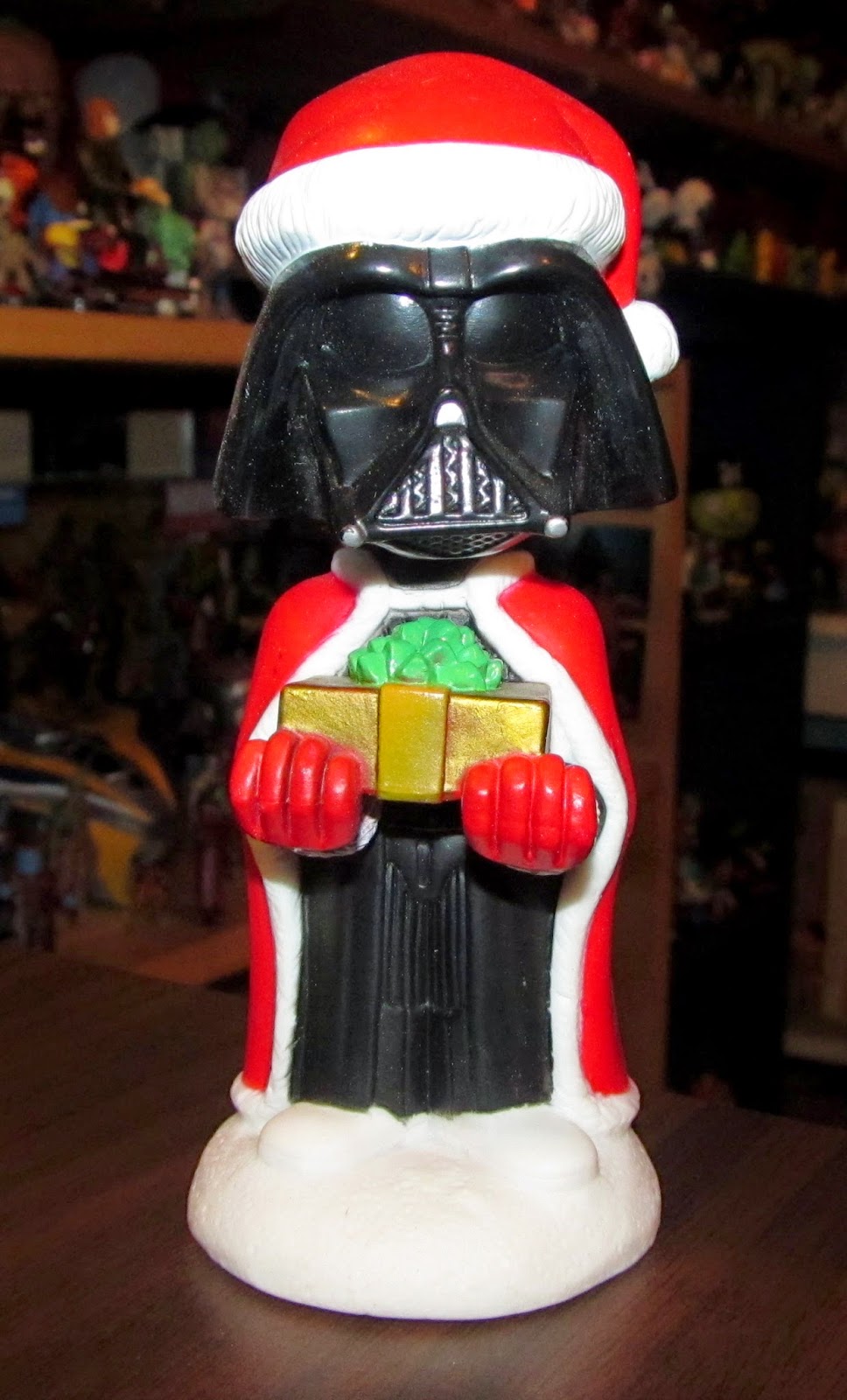 Next up, Darth Vader might not be considered a "horror" villain... but a super-powered murderer he most certainly IS. So dressing him up as Santa Claus most definitely fits the bill as something Creepmas-y. I would NOT want to see this guy sliding down the chimney in the middle of the night. This is a Funko bobblehead from 2009 that my wife picked up for me. 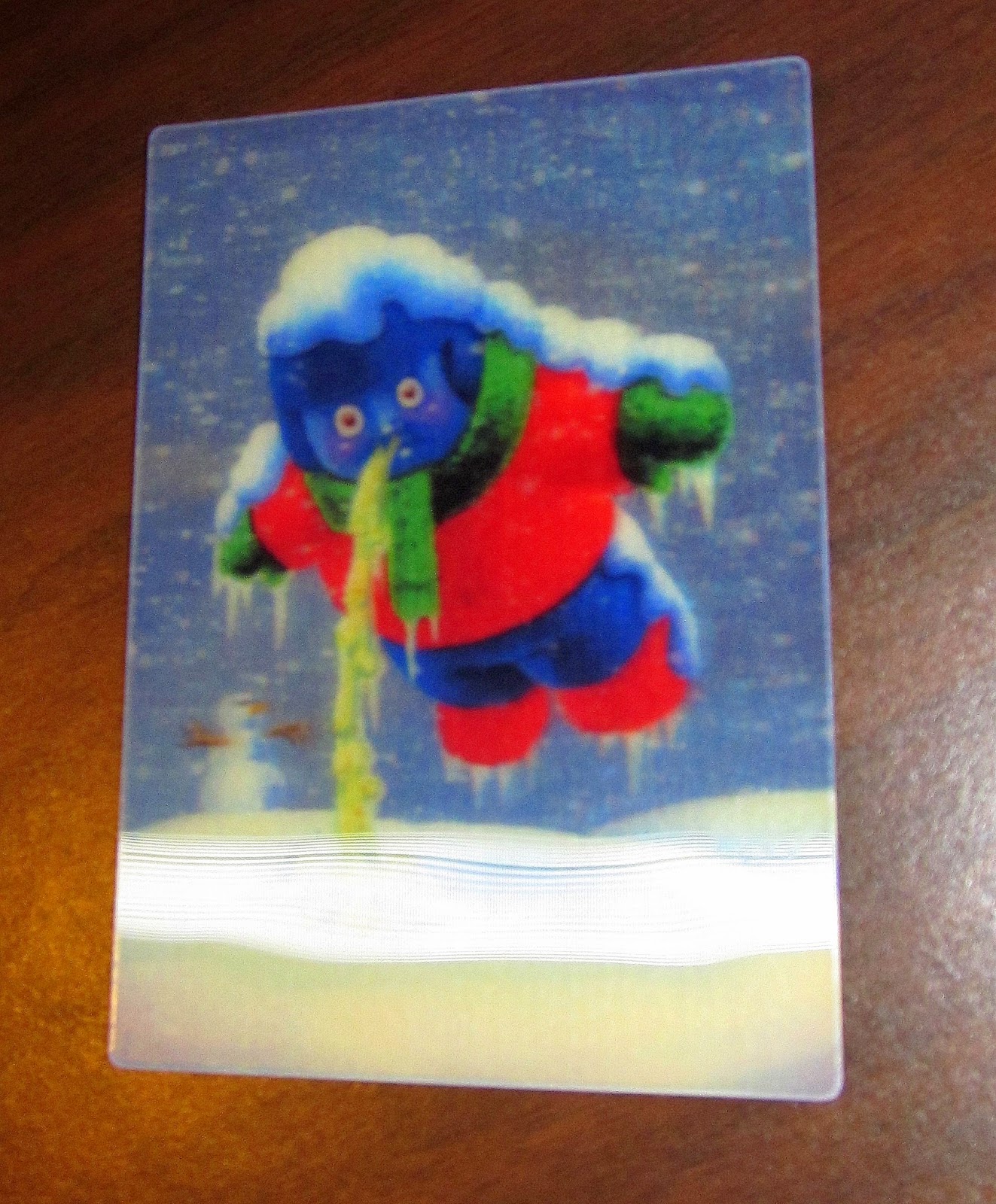 Of all the winter and Christmas-themed GPK out there (about 10 as evidenced by these Topps Licensed GPK Holiday Greeting Cards) this is the only one I own. I do have one of the "Where are they now?" cards for Sandy Clod... but I'm not a big fan of those cards, and so I chose not to include it here. Instead you have Snotty Dotty/Frozen Flo #386 originally from the old 1987 run... here presented as a 3D card that was included in the 2011 Flashback series 2 set. For some reason m camera REFUSED to get a clear picture of this card, which may be due to its lenticular/3D nature. Who knows. 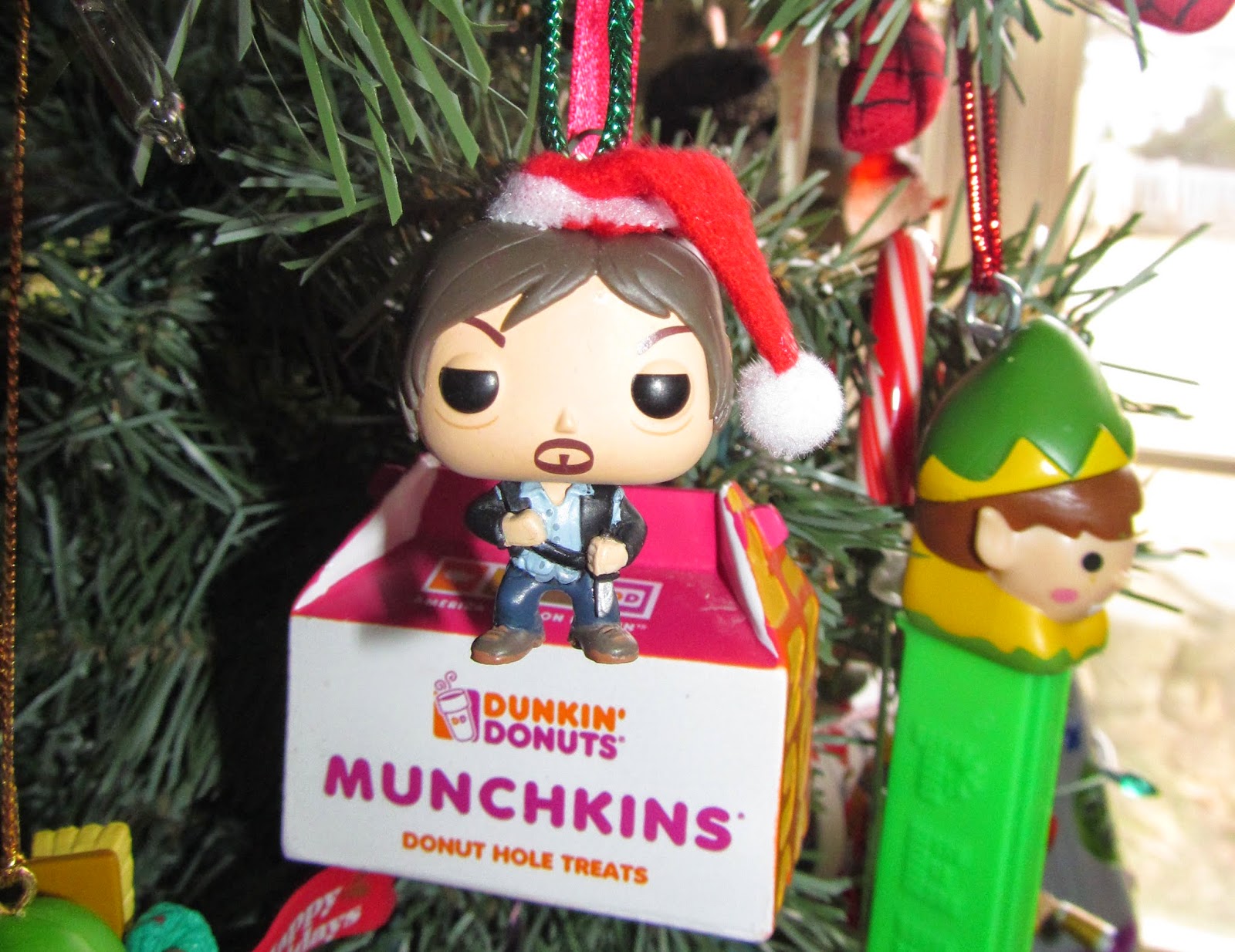 My Darryl Dixon (of AMC's Walking Dead fame) ornament had not been added to the tree when I did my Christmas Zombies post a few days back. So I include him now. He's really just one of those Funko Pop! mini keychains that just came out this year, with a Santa's hat added for some festivity. But it works (don't mind the Dunkin Donuts Munchkins ornament, I don't believe it in any way takes away from the full manliness of Darryl, having it there). 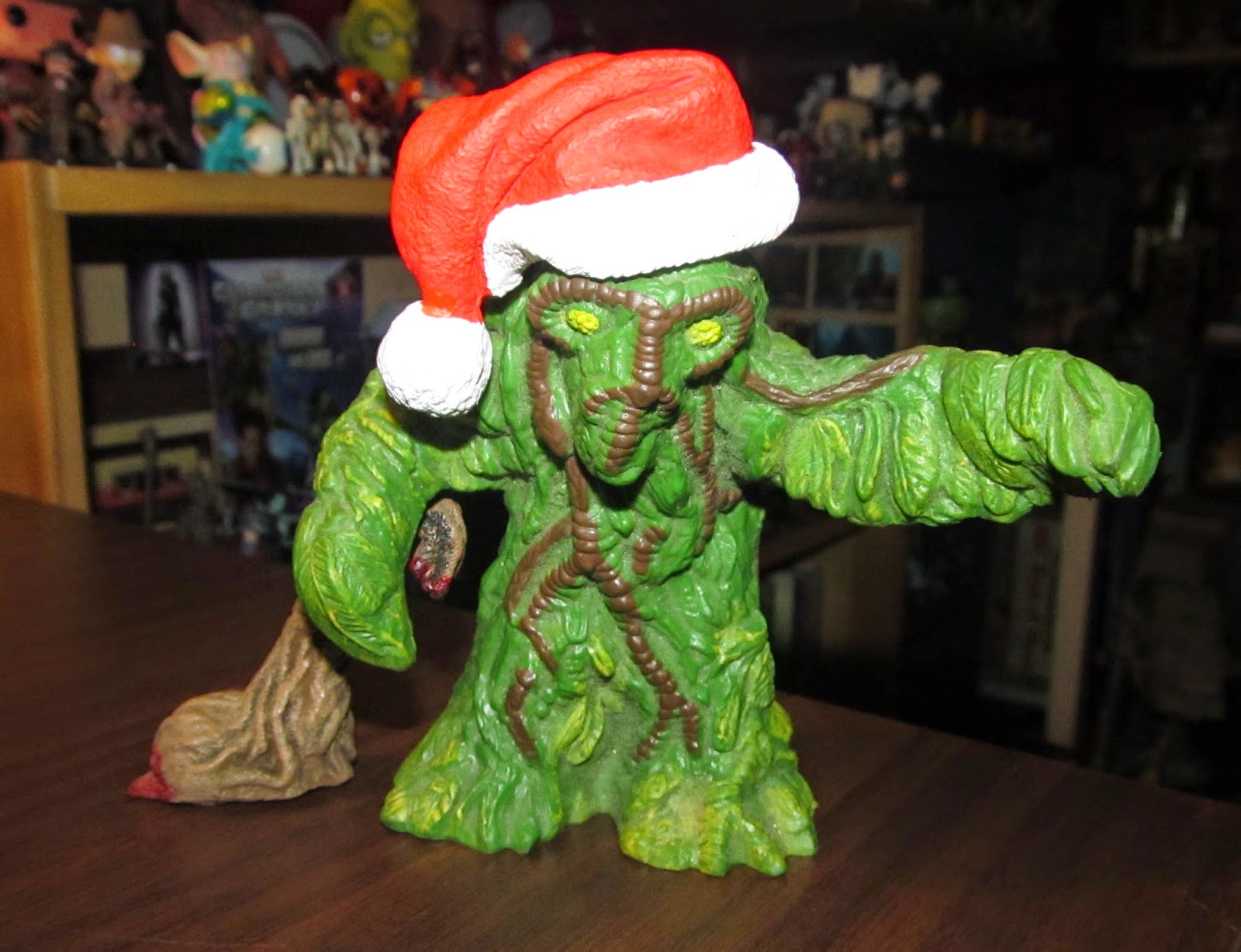 This is my recently purchased (this past summer) shambling mound figure from the old Dungeons and Dragons line produced in 1982. He is wearing a Santa's hat and dragging a bloody sack behind him. I only have a vague idea of why I put this together. What I WANTED to do was find a Krampus toy. But apparently you can buy action figures of Will Shakespeare, a Cat Lady, or even Joss Whedon... but not Krampus. So instead of Krampus I decided to make my own Christmas Monster. If I'd really thought about it, I would have decked him out like a Christmas tree... but hindsight is unfortunately 20/20 in this case and nothing more. Suffice it to say however that this guy is definitely out looking for naughty nerds this season... so you better be good for goodness sake! 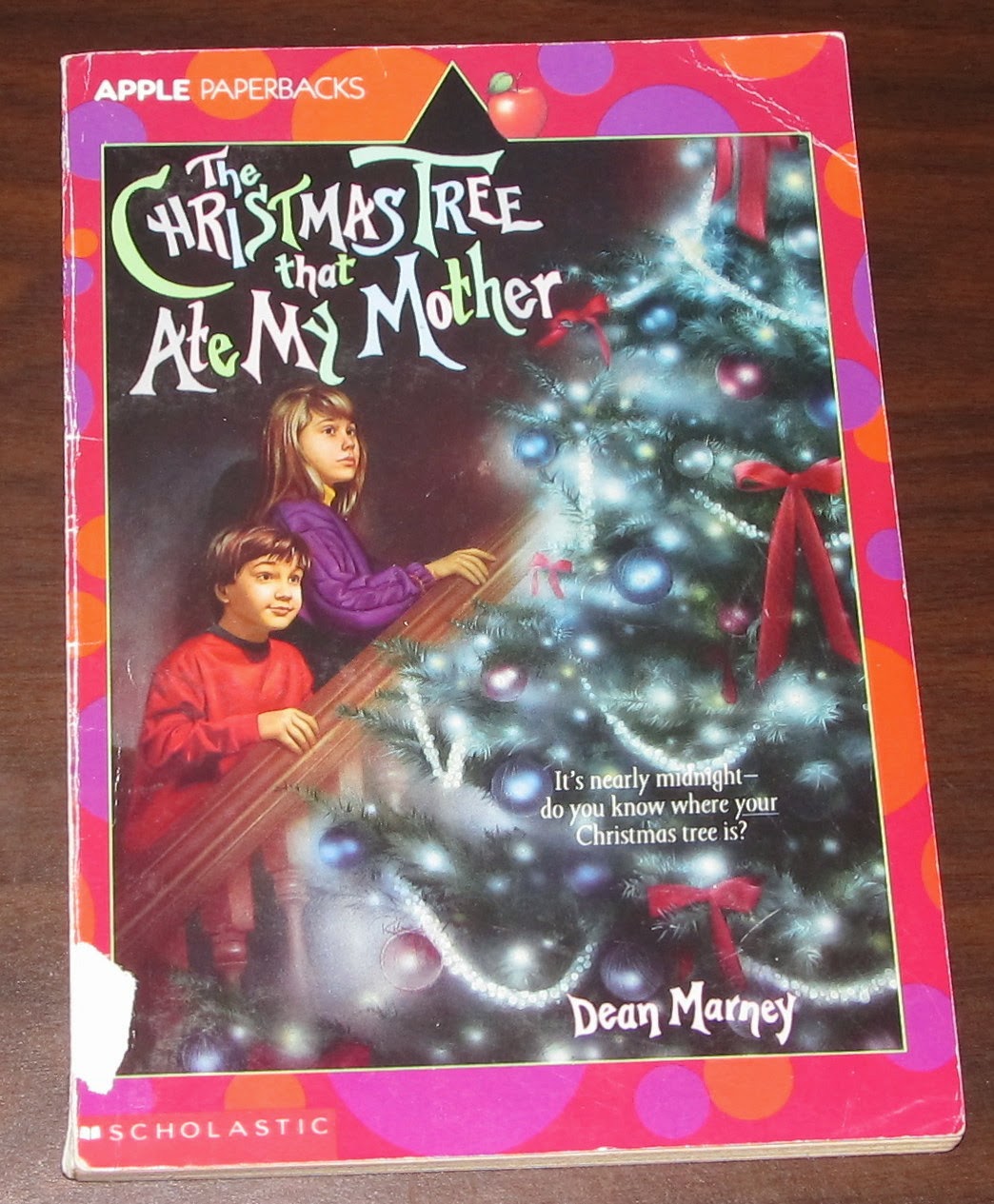 There was one more book I had planned to write about, Dean Marney's The Christmas Tree That Ate My Mother. But I couldn't really drum up a whole post about killer Christmas trees. Apparently this is the first book in a series of books detailing various holiday items that try to eat people. Skimming through the text this looks like a fun, quick read. I may try it out. Also new this year is this sugar-skull blown-glass ornament that we picked up at Target for my daughter. This thing is glittered-out to the max. It simply brings the right feeling of the macabre to the tree that we just love.

Today I'll leave you with a link to iHorror.com's 8 Holiday Horror Films You Need to Watch This Month (from 2013) aaaand just for the heck of it... a link to the search for "Creepmas" on Pinterest.

Happy 13 days of Creepmas! I'll be back tomorrow with the final entry in the countdown, which may or may not involve a Goodwill Goody! Until then, Happy Hunting!
Posted by Derek Ash at 4:49 PM