So today's Creepmas Post brings together one of the most now-classic horror tropes and our most beloved of winter celebrations: Zombies and Christmas! Like Chocolate and Peanut butter, the zombification of Christmas involves two great tastes that taste better than braaaaains together!

First up, I'd like to take a look at some of my S.L.U.G. zombie figures from the all-Christmas wave! These little zombie toys were a great idea, and as they fit the bill for dead-ringers of the kind of monochromatic plastic mini-figures I collected as a kid, you can bet I fell in love with them! My favorites were all the celebrity zombies, such as the Three Stooges, Bruce Lee, Col. Sanders, Mr. T, Hulk Hogan, and Andre the Giant. But the Christmas characters are even more near-and-dear to my heart than all the others! Let's take a look, shall we? 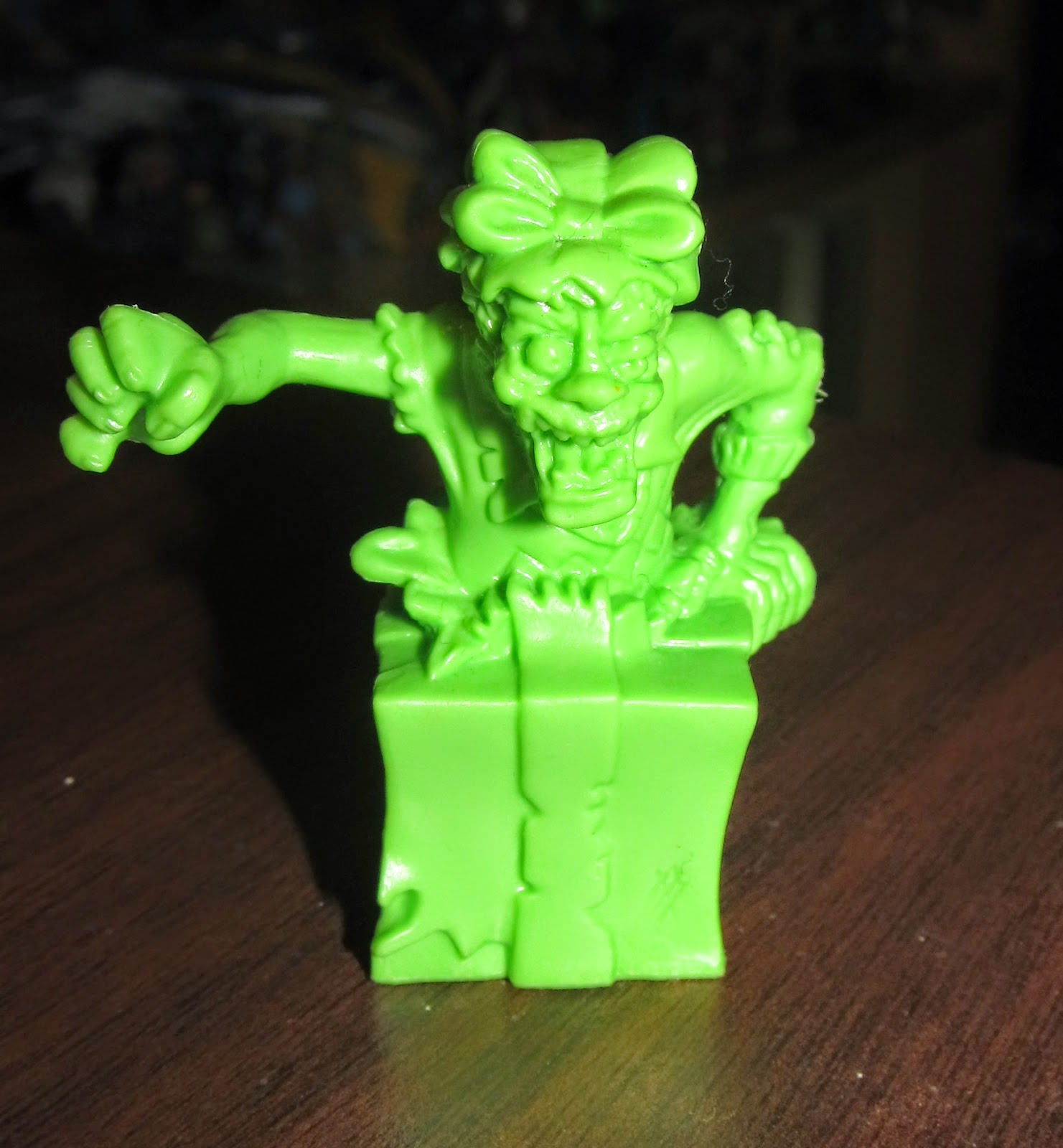 Surprise Demise is a zombie bursting up out of a Christmas present. He's not my favorite, but he's got the Christmas flair going for him, that's for sure. 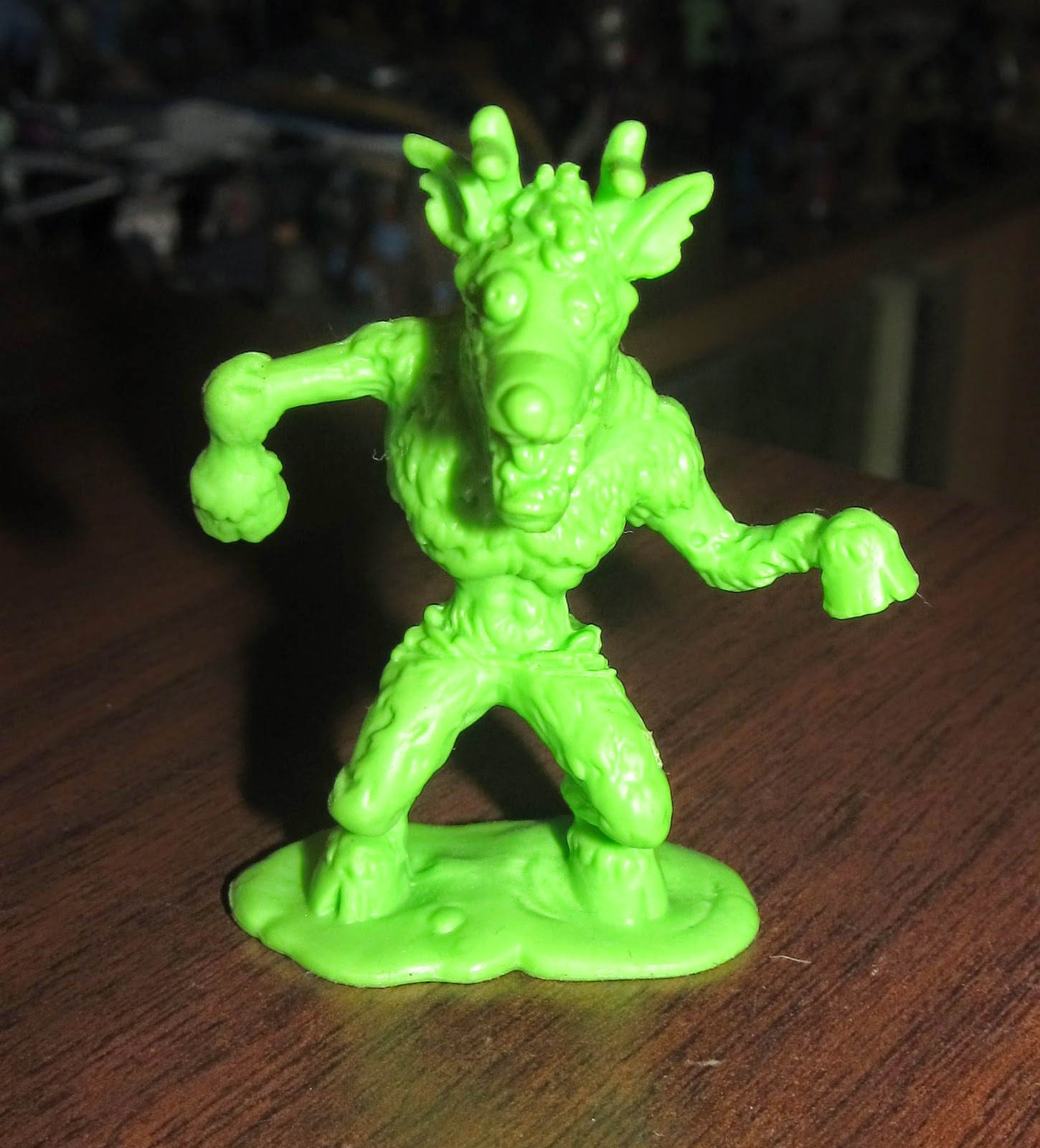 Ralph Reindead is our surrogate Rudolph, although I find it hilarious that becoming zombified has also caused him to walk bipedally. He makes me think of the killer deer from Slither. 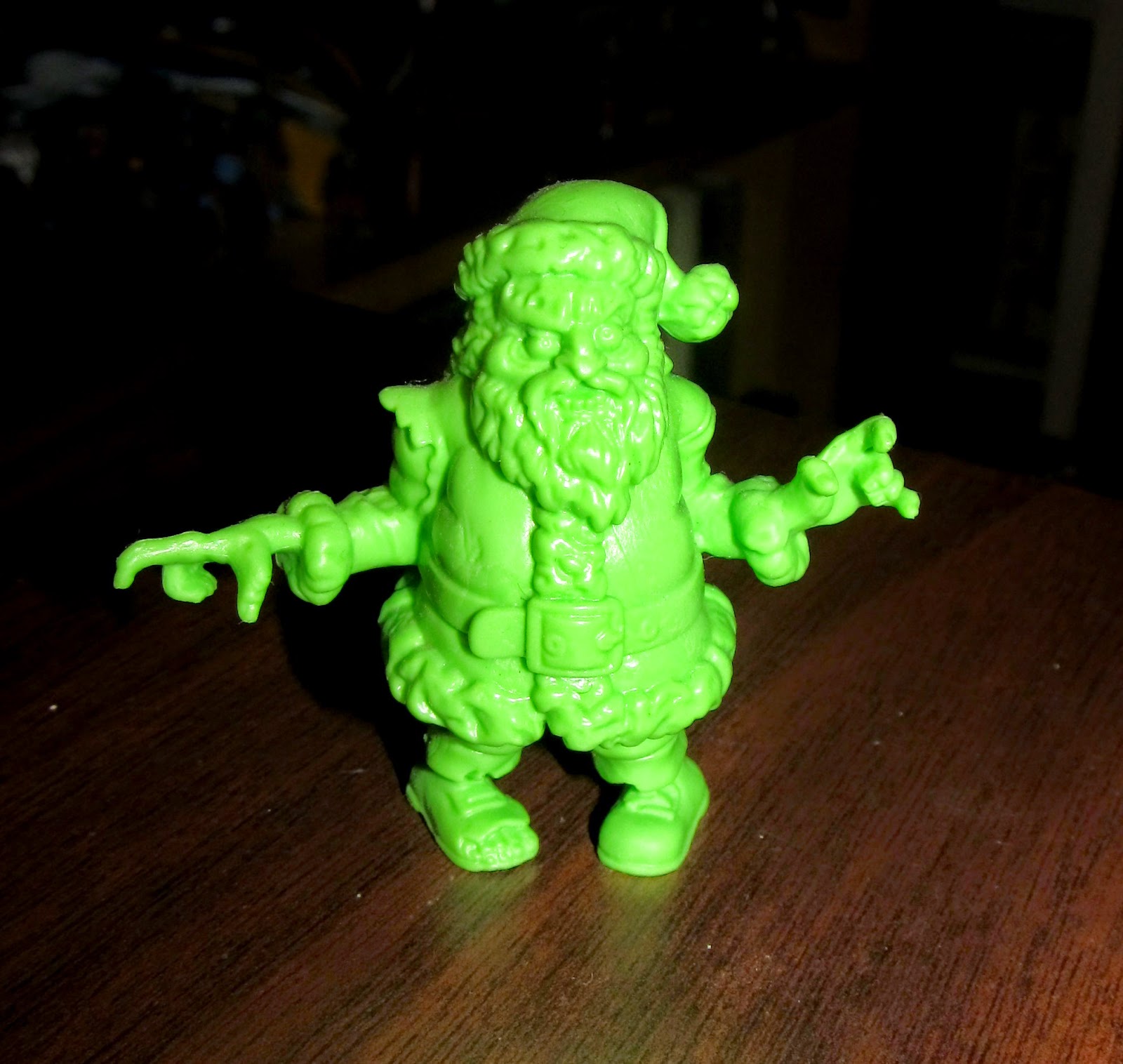 Santa Claws is probably my second favorite of the 4 I own. Zombie Santa Claus seems pretty much like a no-brainer right? Literally? 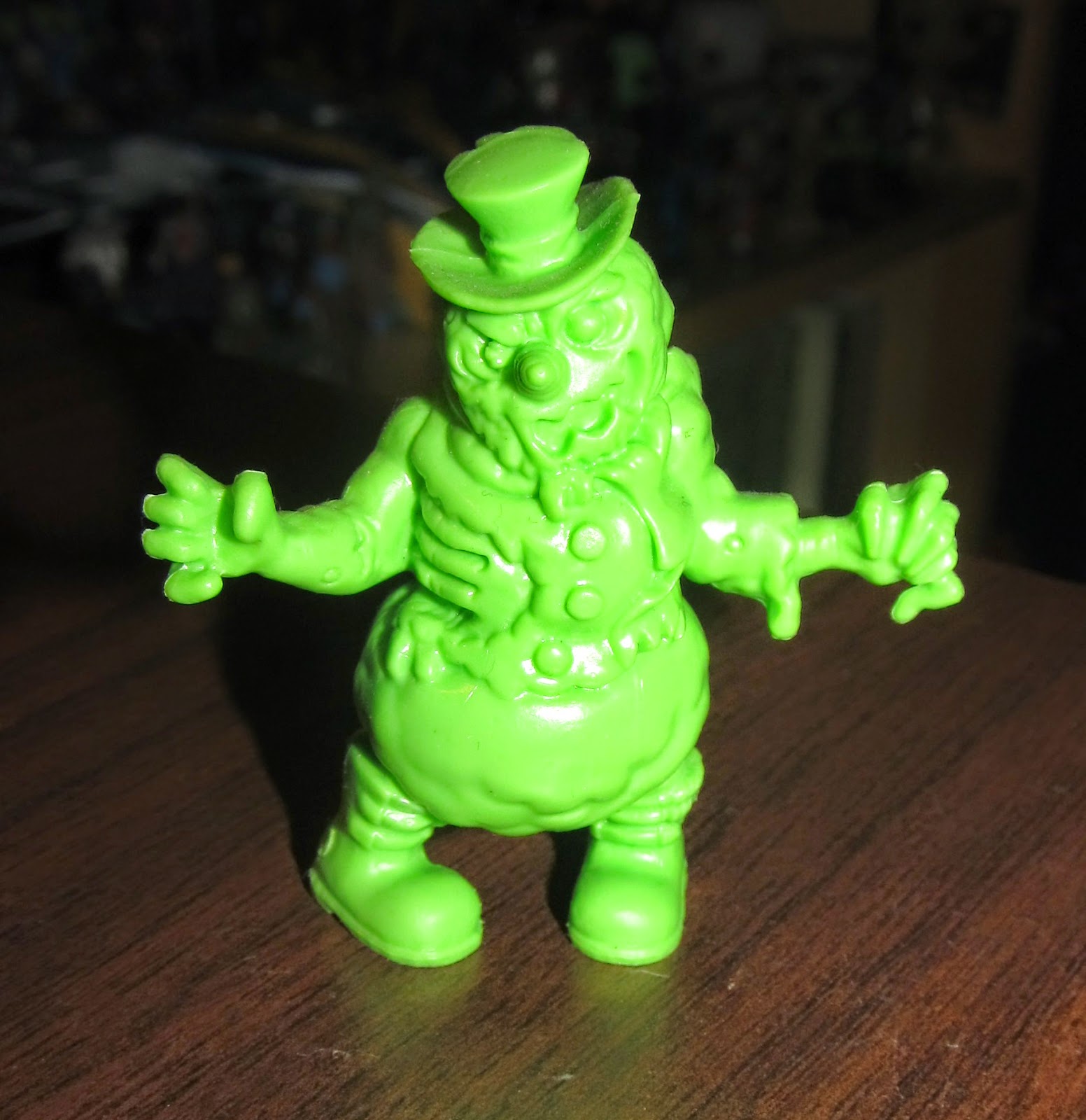 And finally, Frozen Fright is probably my absolute favorite character out of the assortment. I have zero interest in the logic behind a zombified snowman with an internal rib-cage. I just love the idea of a flesh-eating snowman.

In addition to the four I have in my collection, they also produced a drummer boy, an elf, a nutcracker, and an Ebeneezer Scrooge zombie. The humans included in these packs were not Christmas-themed in any way, and were in fact just repacks from the regular series. The only four characters I am interested in owning are these four however. All the others didn't really grab me. Here is Pixel Dan's review of the Christmas wave of S.L.U.G Zombie figures:


Moving on past just my S.L.U.G. collection, I also have a couple of books that fit the theme of zombified Christmas! 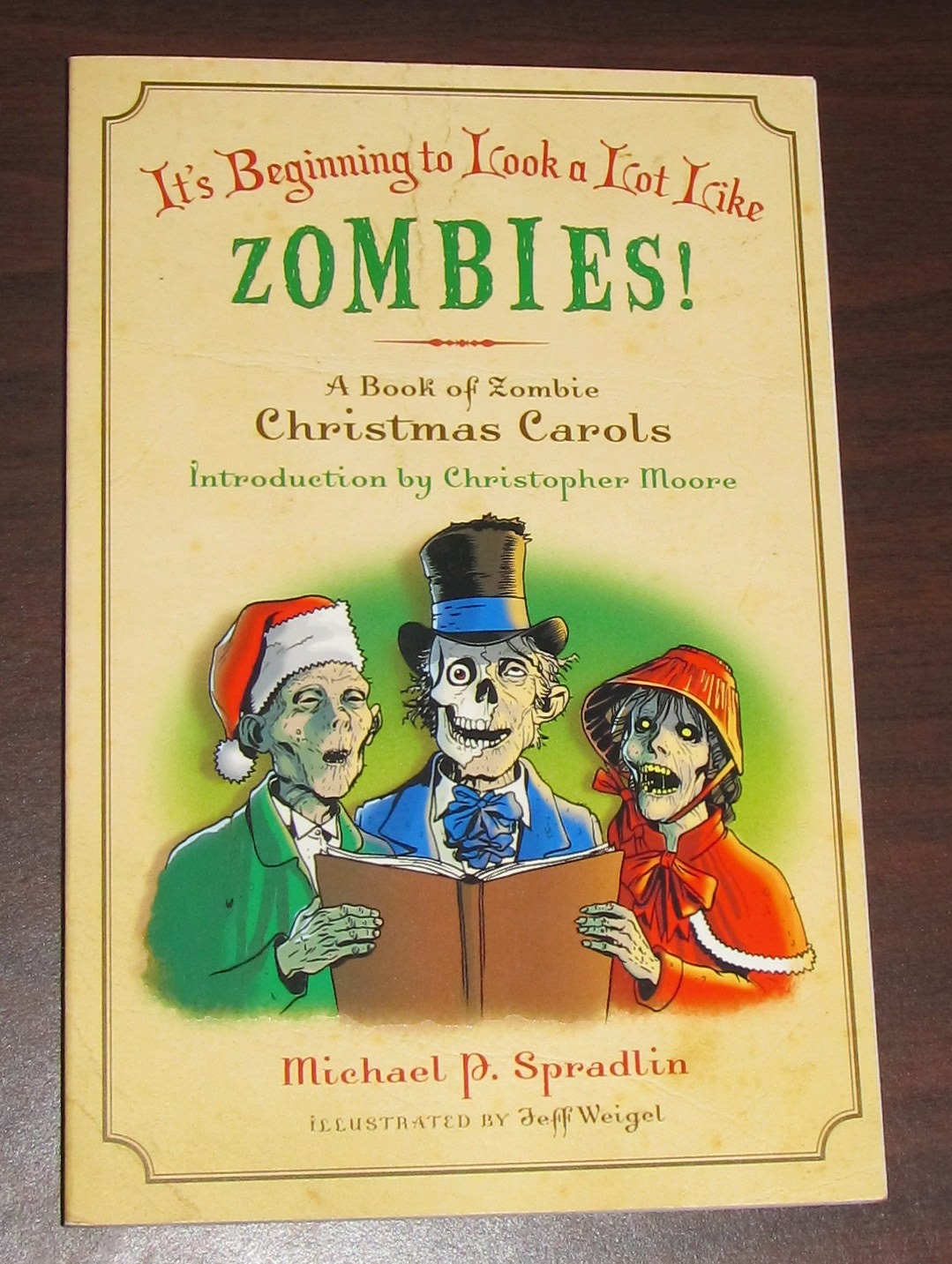 It's Beginning to Look A Lot Like Zombies is a collection of parody Christmas Carols with a zombie theme. Written by Michael P. Spradlin and illustrated by Jeff Weigel, the collection isn't the best... but there are some clever twists and turns here or there. I won't list all the songs here, but included are such classics as: "I Saw Mommy Chewing Santa Claus," "We Three Spleens," "Deck the Halls with Parts of Wally," "Let's Feast on Merry Gentlemen," "Grandma Got Turned Into a Zombie," and "Smash Their Heads With a Rock*". Some of the songs fit the tunes pretty well, while others don't really flow at all. Maybe I'm being picky, maybe I'm missing the point... but believe it or not I judge these things when it comes to a good parody song. 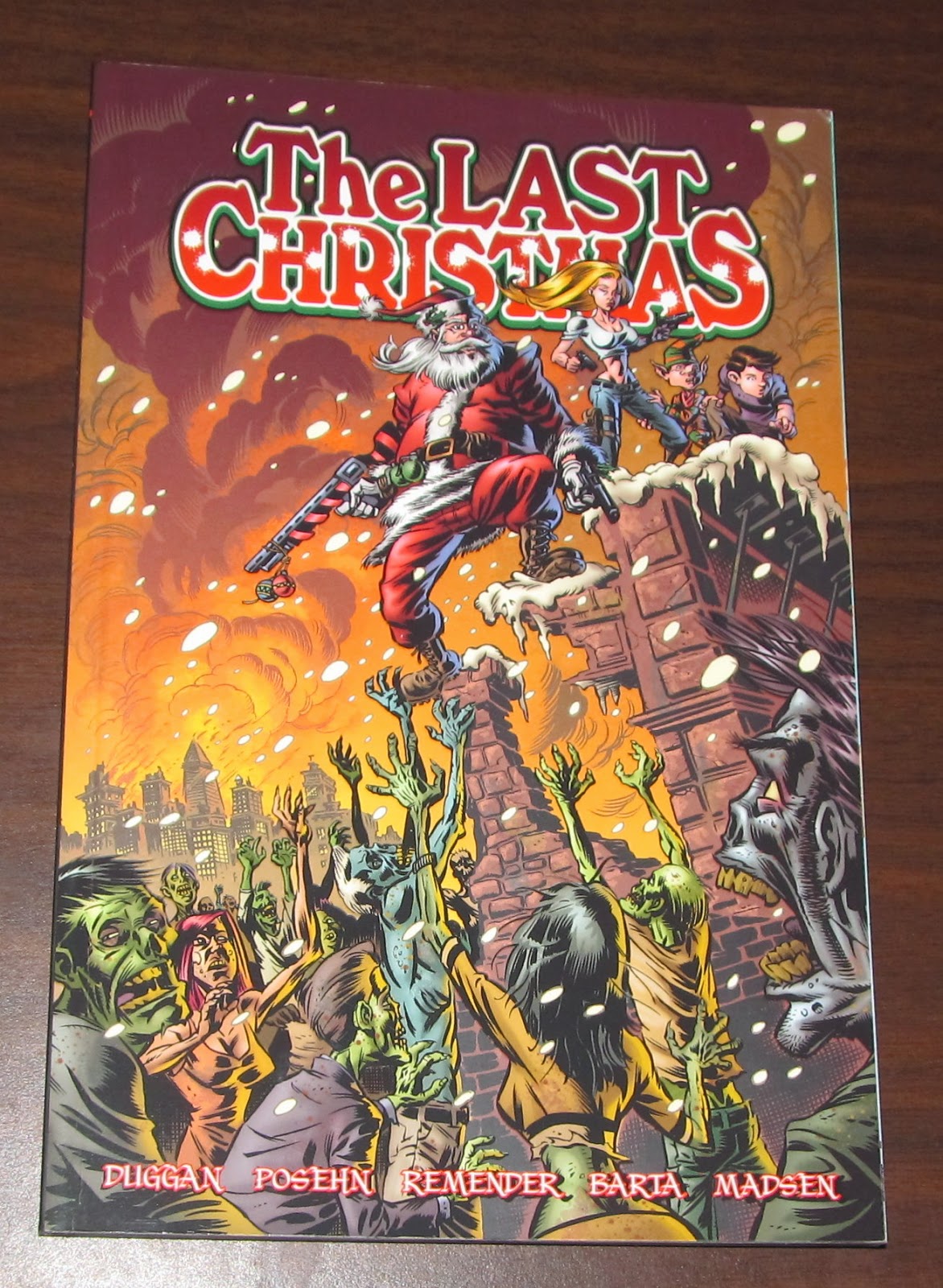 Finally I have this copy of The Last Christmas created and written by Gerry Duggan and Brian Posehn, and pencilled by Rick Remender. It is the story of a post-apocalyptic world where a zombie plague was caused by toxic rain AFTER the end of the civilized world. Mad Max-style marauders have attacked the North Pole and killed many of its residents including many of the elves, reindeer, and Mrs. Claus. Santa becomes depressed and suicidal but discovers he cannot end his own life because there is still one child who believes in him. So he decides to find the last boy on earth who has faith in Santa Claus, and murder him. But things do NOT go according to plan, and we all bear witness to the results. This is not a book for the faint of heart or the easily offended. There is MUCH to be offended by in this book, and I can't in good conscience recommend it to everyone. I find it hilarious. Your mileage may vary.

Happy 13 days of Creepmas! I'll be back tomorrow with another entry in the countdown, which may or may not involve a Goodwill Goody! Until then, Happy Hunting!

* (That last song is sung to the tune of Jingle Bell Rock, but its almost a better title with no context at all...)
Posted by Derek Ash at 12:33 PM