So this is it! Day 13! The big finale! I figured this one had to be special, as I will probably NOT be celebrating Creepmas again next year unless some sort of BRILLIANCE strikes and I have an awesome idea for another Creepmas celebration on the site. So... it's time for a blow-out. Back in mid-November, I posted to let anyone know who cared that I would be taking November off from blogging. In that post, I put up a picture of a crèche/nativity scene that I had done with pop-culture characters a couple years prior.

So THIS year I figured I would do yet another crèche... but make it a Creepy Creepmas Crèche!!! So take a gander at my finished project: 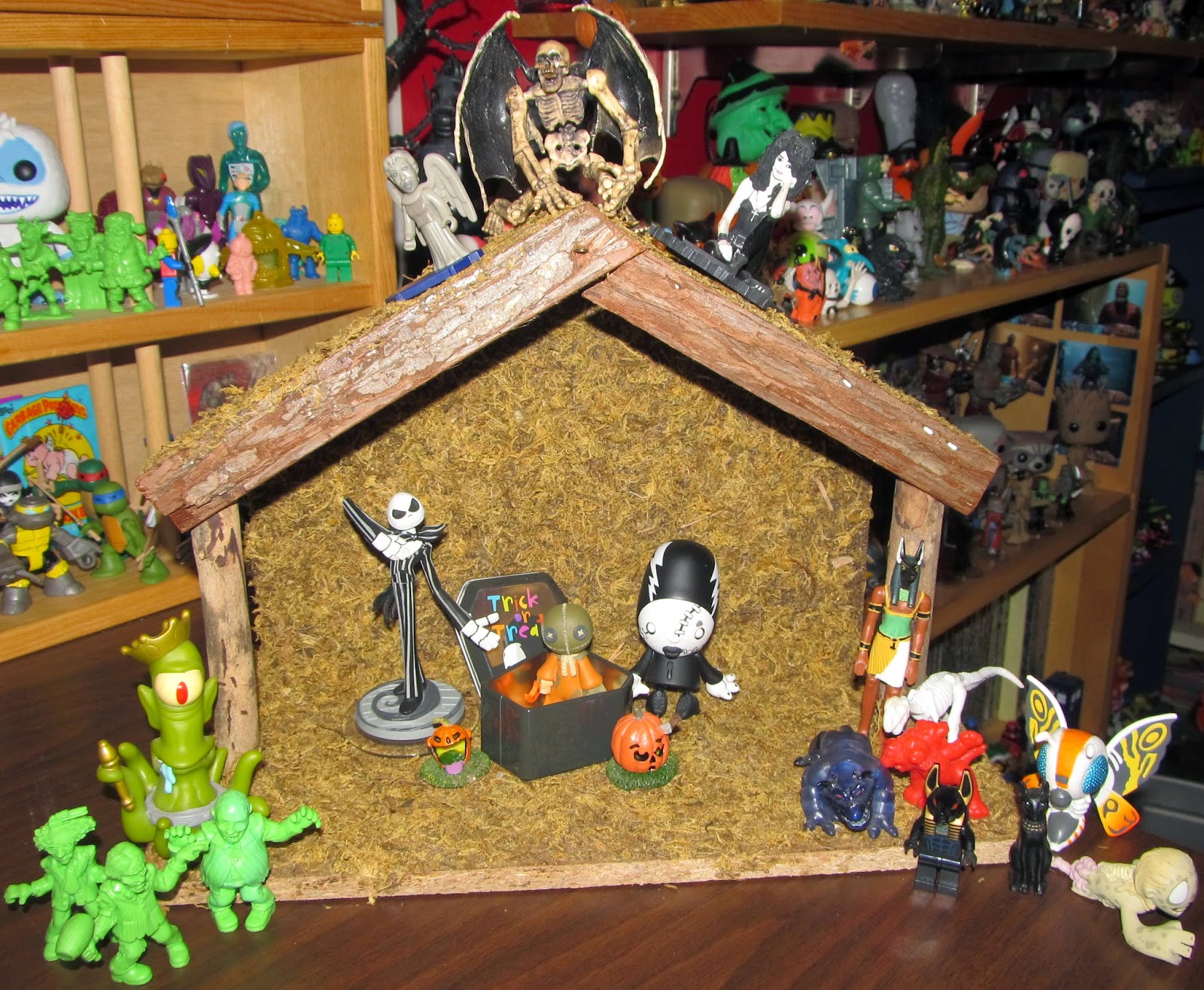 It decidedly does NOT have the same sense of grandeur that my first nativity scene had. There is not, for instance, a giant orange T-Rex trying to eat the angel. But it matters not dear readers, for I posit that in this case, it is not the largesse that makes the crèche... but the sense of story. The internal logic. The character selection. The fact that I tried to keep all of the figures relatively horror-based or at least death-based. So as you soak in your initial view of the scene, let us prepare to take a closer look... shall we? 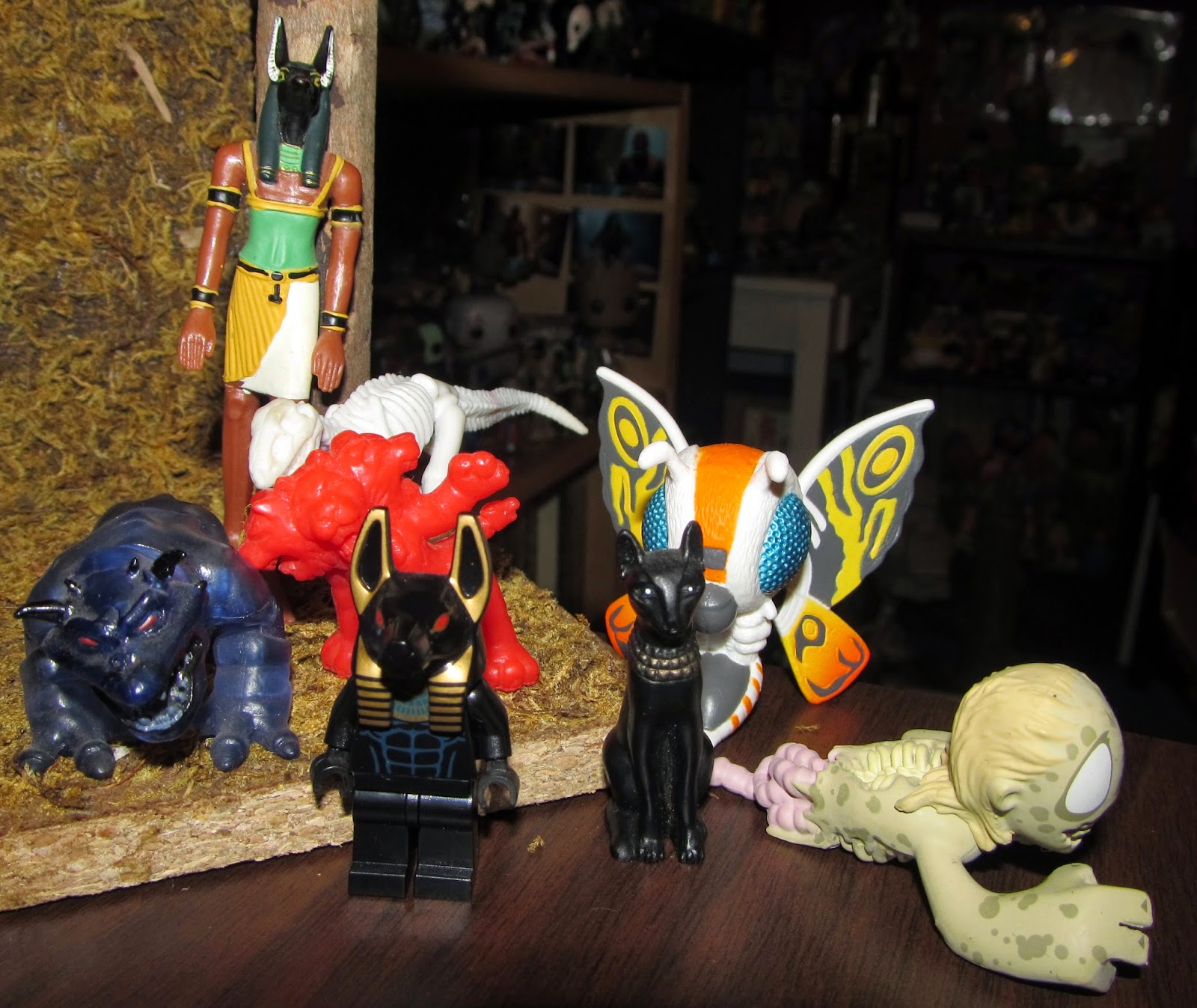 First, we have Anubis (the taller) as my shepherd. This was a really hard role to cast as I had absolutely NO horror toys that made sense as a "shepherd". I wracked my brain. I would have killed and devoured someone's liver for a Hannibal Lecter action figure at that moment! One of the Funko minis would have been perfect (Silence of the Lambs??? Eh? EH?) but alas, I could not think of a shepherd that fit the bill. But then I thought of the role Anubis plays in the Egyptian after-life... guarding souls on their passage to their judgement much like a... a... SHEPHERD. So I went with it (-shrugs-). In this shepherd's flock, in place of sheep, or a donkey, or a cow or any sort of normal animals, I went with: Tiny Anubis. I dunno why. I just wanted another animal in there. A Hellhound from Ghostbusters and Cerebus. Because dogs. Bast... because cat? This isn't making as much sense as I write it now. The skeletal T-Rex I felt was inspired at the time... but now I just miss my massive orange T-Rex all the more. Mothra. Is... an animal I guess? And that runaway crawling zombie just made me laugh. Shepherd! Round up that flock! Ha! 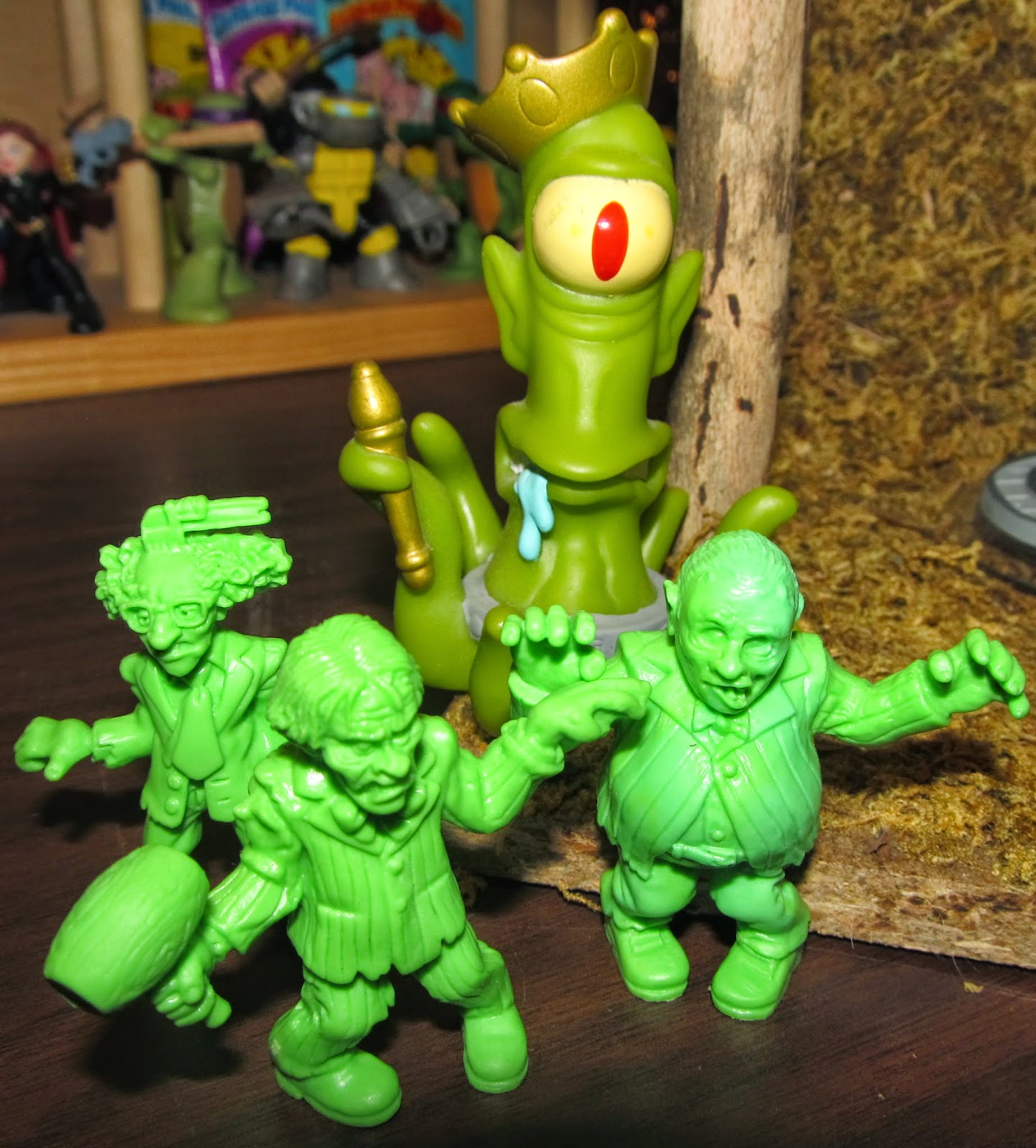 Next up we have the Three Wise Guys... eh? Zombie stooges are perfect for being wiseguys... and there's three of them, and they are zombies. So PERFECT. I'm also pretending that the hammer, the wrench, and Curly's missing eyeballs are the gifts for the newborn king. And Kodos? I tried to tell him I wasn't going with a "three kings" theme, but he just wouldn't listen. And just wouldn't leave. So there he is. A third wheel in a group of four. Not so wise. 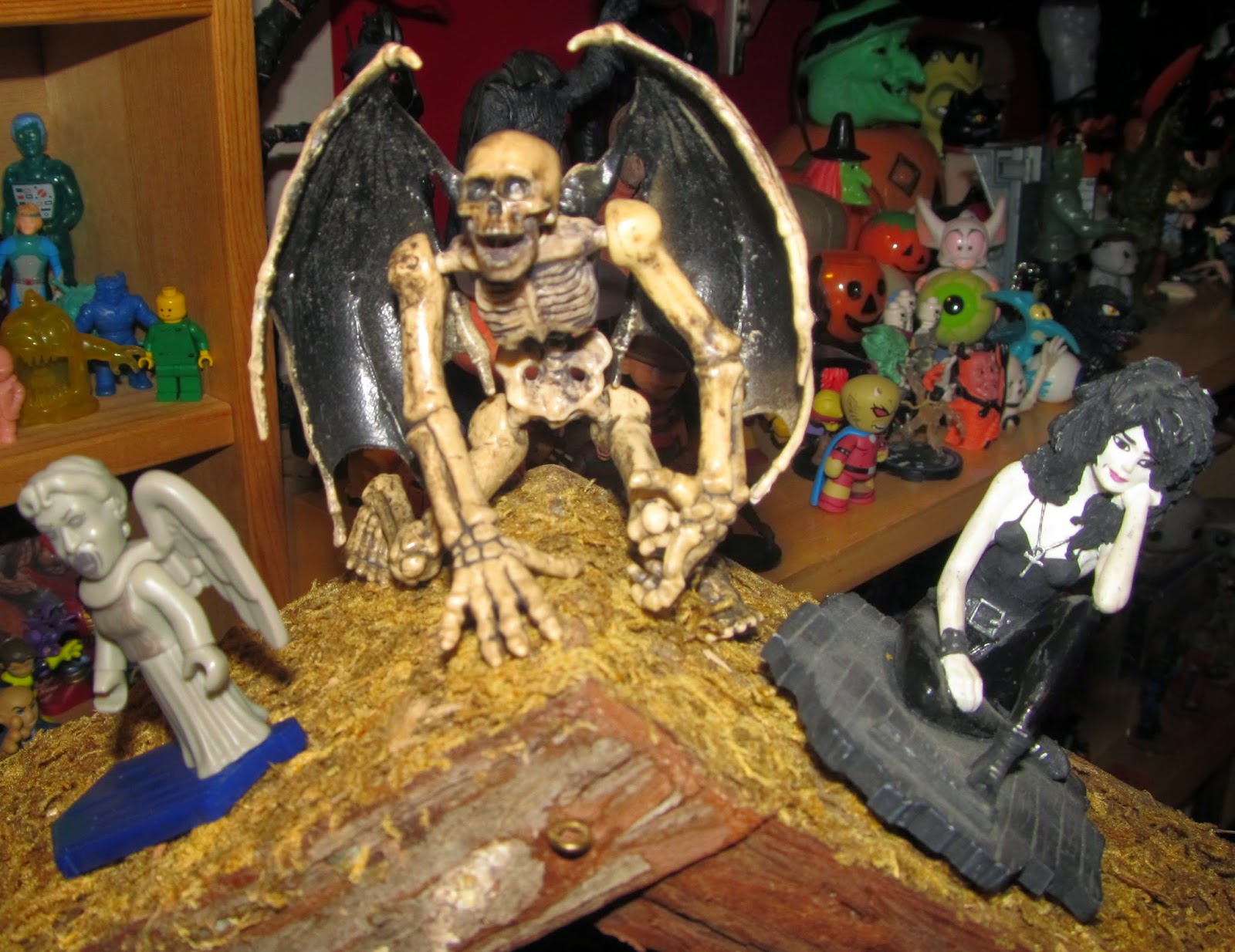 Now we're up to the angels. Attending this very important birth are not one-- not two-- but THREE angels! I couldn't NOT include the skeleton with wings. It perched there so perfectly, and just WORKED. The Weeping Angel? C'mon! And Death from the Sandman just balanced it out so I had to have three. I think it works. Can you definitively say exactly how many angels should be in attendance? Especially at THIS birth? I don't think you can. 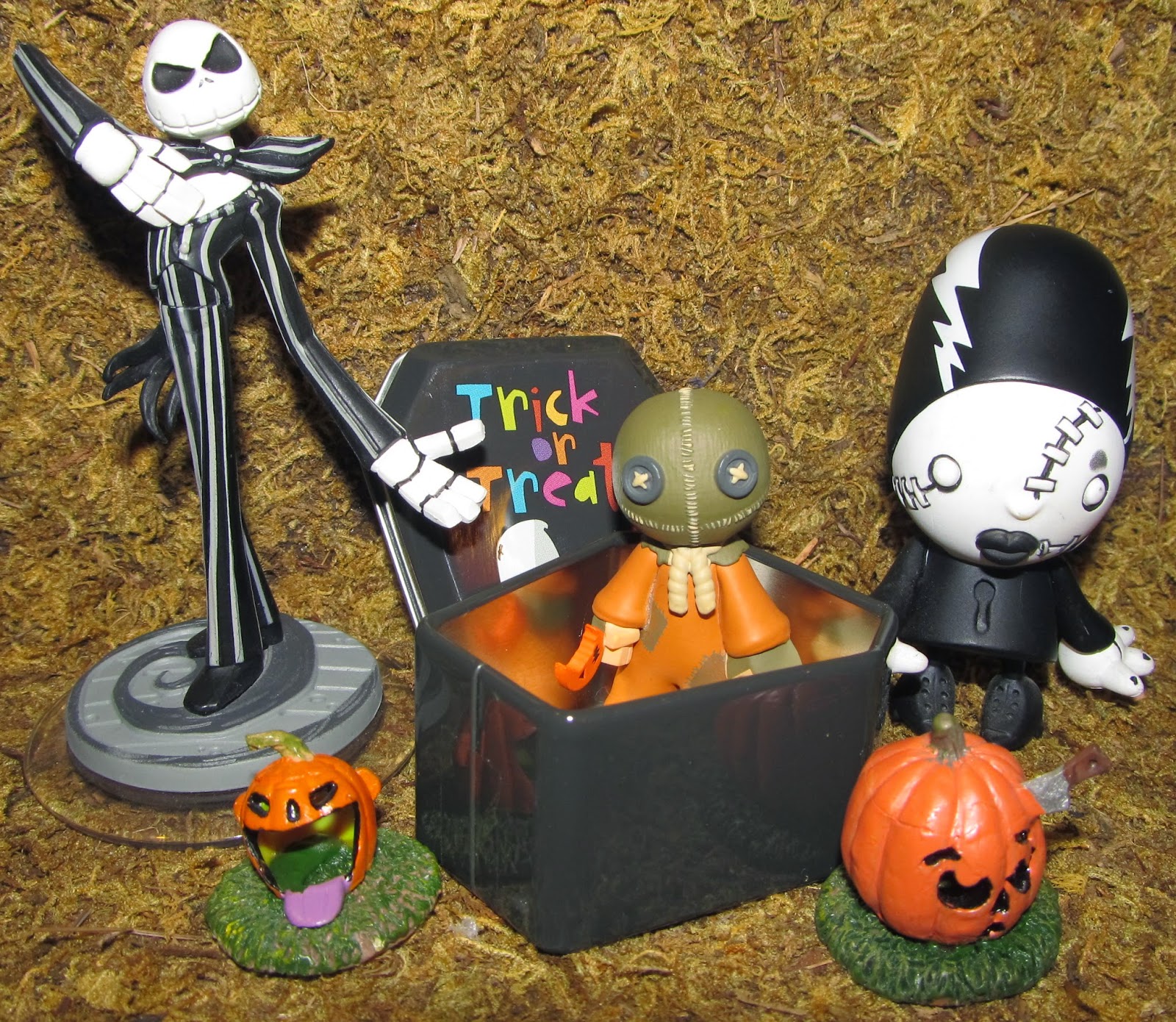 Finally we have the royal family themselves. We have the proud Papa Jack Skellington, the glowing mum The Bride of Frankenstein's Monster, and the bouncing baby boy himself, Sam from Trick R' Treat! I don't think there could ever be a BETTER group of ghouls to represent the taking over of Christmas by the creepiness of Halloween... There's just no way to do better than The Pumpkin King, The Bride, and the guardian of Halloween himself. Plus I think the goofy jack-o'-lanterns lend a certain kind of ambiance. 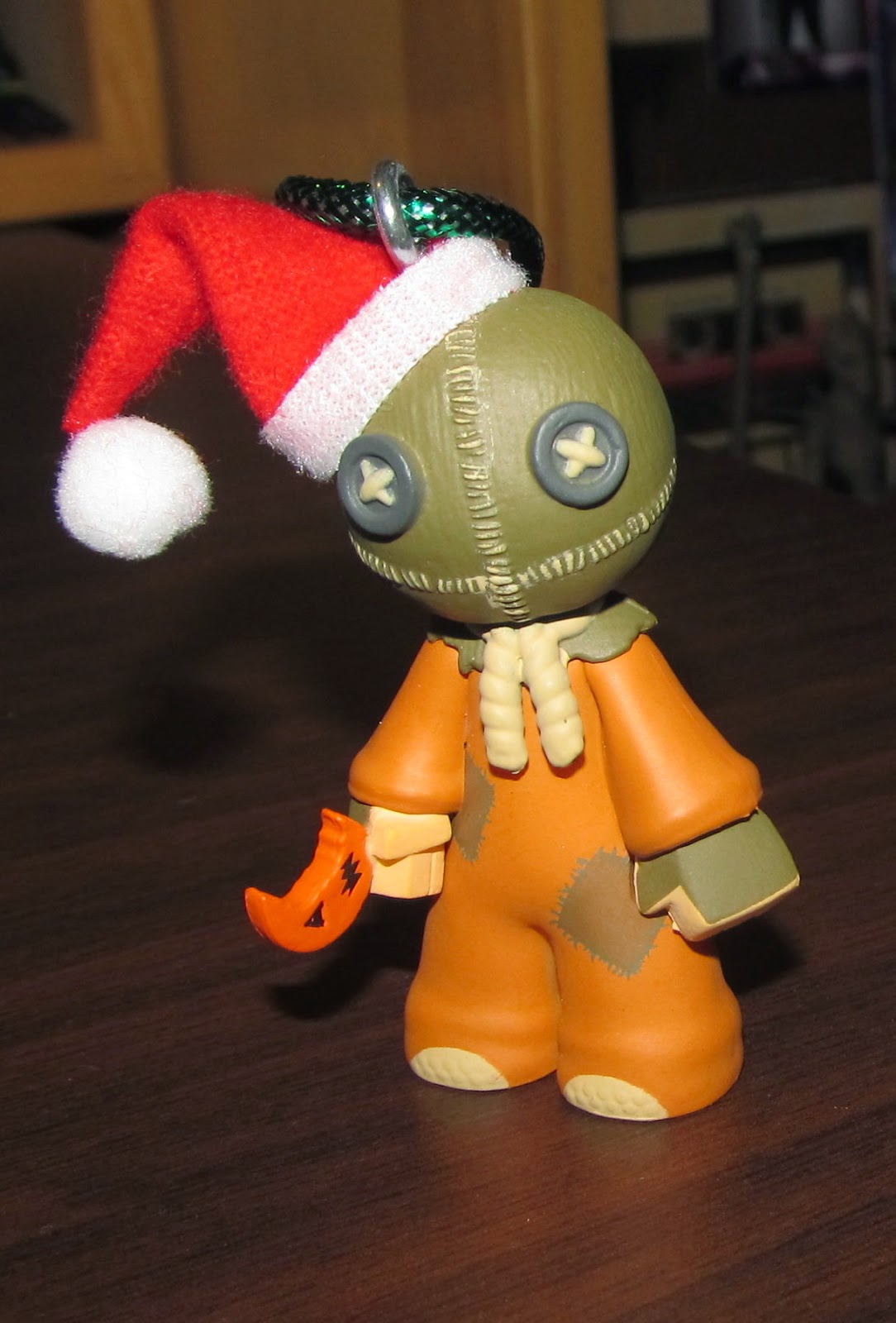 I love Sam so much I even have a spare that I turned into a Christmas ornament! I love seeing this little fella staring down at me from the tree! And if there are any doubts that Sam can't be a great part of your Christmas festivities, just check out this video from Fearnet!

So that's it kids! Happy 13 days of Creepmas! I'll be back tomorrow with the start of my 12 days of Christmas countdown, which ends on Christmas day itself! I won't spoil the surprise today by sharing what it is I'll be talking about for my Christmas Countdown, but I do want to thank you all for celebrating Creepmas with me this year! I'll be back tomorrow! Until then, Happy Hunting!
Posted by Derek Ash at 5:59 PM