It's League of Extraordinary Bloggers time once again! I missed out on last weeks one word topic: "Spies" but this week I'm back in the saddle for:

So... I didn't feel like I could participate in last week's topic because... well I don't have any spy stuff... I don't know any good spy movies or spy books (I know of James Bond... but I've not seen any movies, except Casino Royale, the new one, and I didn't get into it... and I own one copy of one James Bond book... but I don't feel like I could feature it on here). I own not one single spy toy, or spy item that I have picked up from Goodwill. So... no spies for me.

So when I saw that this week's topic was cowboys, I got excited, because who doesn't have something to do with cowboys laying around right? Who doesn't own a few western DVDs, or a Louis L'Amour novel or something...

Well... apparently I don't. It occurs to me that I don't really do westerns... western comics, western TV shows... western anything. So I started scouring the cave... looking to see what there was for cowboy toys. I had to have something in there. And... I did find some stuff. Some of it has already been featured on here before. Like:

This guy... who I featured in a post back in August. He's a genuine Goodwill find, and one of the few I'm going to show today. Now that Hostess has gone under there is a certain poignancy in The Twinkie Kid's appearance here. Not enough though. I had to keep looking. There was also this cowboy filled graphic novel: 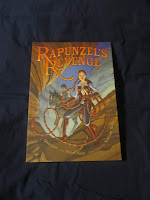 Rapunzel's Revenge, which I also featured back in August. It's a rootin'-tootin' good time that takes the classic fairy tale and places it in the western environment. A pretty incredible read actually, and probably more than just a little bit the inspiration for the Disney movie, "Tangled". This was a Goodwill find as well.

But as I got looking around the rest of the cave, I realized the painful truth: There was a disturbing dearth in the cowboy department.

I did manage to find some though... and here they are: 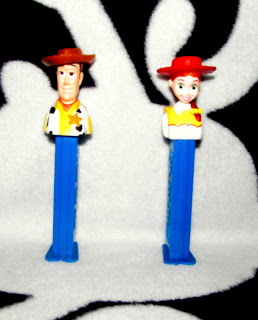 A pair of Woody and Jessie Toy Story 2 PEZ dispensers. They look like they're straight off the shelf of Woddy's Round-Up Merch from the movie. 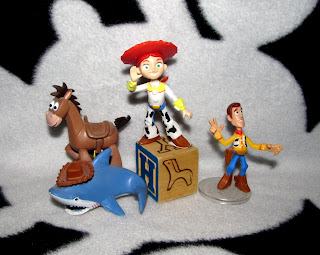 Toy Story Buddies! I have featured these guys before on the blog as well, but right now I'm just going to focus on the famous cowgirl and boy, with their trusty steed Bullseye. I also wanted the shark who ended up with Woody's hat to get a little face time to. Look! He's a cowboy! Howdy-howdy-howdy! I have an Old Prospector "Stinky Pete" figure, but I forgot to stick him in there... so meh. 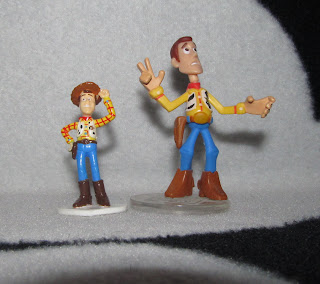 This picture is to feature yet another Woody toy I own, this one from the Hotwheels Toy Story Action Pack set that was released for the first movie. The set came with R.C., Woody, Buzz, and Babyface (the creepy doll-headed-erector-set-spider-thing from under Sid's bed). I left the Buddy-Series Woody in there for scale. 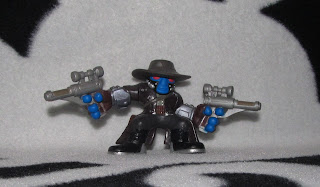 Probably the most blatantly cowboy-style character from the Star Wars Universe... Cad Bane! I'm not a big fan of new the new Star Wars stuff so far... but some of the new show hasn't been awful... and I absolutely adore some of the designs for some of the newer villains like Darth Maul, General Grievous, and this guy. 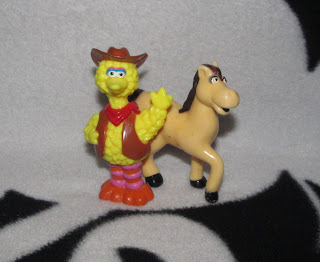 These dangerous-looking outlaws I'm not going to say too much about because they're really only here as a sort of preview for an upcoming post about a larger Goodwill find. But hey... a cowboy and his trusty steed. Can't beat that right? Even if he is an 8 foot tall primrose-yellow bird. And here is the closest thing I think I will ever own to a Buster the Horse figure (Forgetful Jones's trusty steed)... although he might serve better as Whatshisname. He's not quite the right shade of brown for either... So I think he's meant to be a generic Sesame Street Muppet Horse: 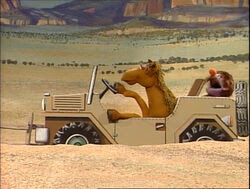 But a fella can dream.

Probably my favorite find (and my favorite photo from this post) in among my many treasures are these two plastic cowboy figures, which I keep on a knick-knack shelf above my desk:

I love the toys on this shelf, as they are mostly all cheap in nature, and the sort of toys you would find abandoned at the bottom of a toy-box. These guys also remind me of the artwork of Chris Cosnowski for I guess what are pretty obvious reasons... I am just this moment realizing the red cowboy from above is featured in one of his paintings: 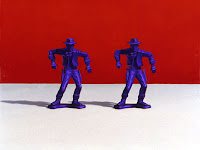 So here's the complete cowboy collection in all it's glory... which isn't much glory, I'll admit... but I couldn't find my copy of Quigley Down Under on DVD... and this is what you get when you throw a one word topic at me, League: 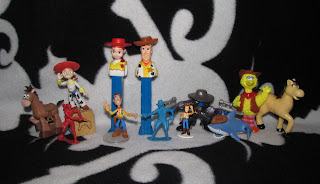 This is where I went with "Cowboys" now go see what some of the other League Members Posted!

- Rich over at Fortune and Glory (Days) is all about the Spaghetti Westerns in movie and video game form!

- Jaime at ShezCrafti shares an oldie-but-goody Disney Musical short about the basic needs of all cowboys.

- I'll gladly meet Shawn from Branded in the 80's at high noon for a shoot out to see who gets to walk away with his awesome vintage Lone Ranger action figures!

That's it for this post folks, but I'll be back with more Goodwill Goodies soon... so until then, Happy Hunting!
Posted by Derek Ash at 5:21 PM