So I'm still currently reading Cherie Priest's "Boneshaker" which is pretty addictive now that I'm into the thick of the story. But I'm always thinking ahead to the next book. As you all may or may not know, I buy a lot of books from Goodwill. Every trip I make into Goodwill, regardless of whatever else I may discover, no matter what else I may bring home with me... there are always books.

So I thought I would start focusing a bit on books I've found at Goodwill that Geeks should read. These are the classics that if you want to consider yourself a card-carrying member of the Geekist society... you may want to be familiar with at least the Cliff's Notes. 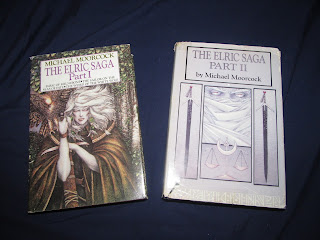 Up first are two volumes in Michael Moorcock's Elric Saga. There are something like 17 books or so in the entire collection of Elric books by Moorcock, and these two volumes collect the first 6. Elric of Melnibone, The Sailor on the Seas of Fate, and The Weird of the White Wolf are all together in Part 1. The Sleeping Sorceress, The Bane of the Black Sword, and Stormbringer are the books collected in Part 2.

I have in fact actually read the first of these two collections, and I genuinely enjoyed the books therein. This is my first exposure to Moorcock's novels, though I understand he has a body of work that is incredibly deep and complex, weaving his various stories together (even those not involving Elric) into a tapestry about his Eternal Warrior concept.

But leaving all that behind for a moment, I just want to talk about my experience reading these first three Elric novels, with no strings attached, and no previous knowledge to fall back on.

My first observation is this: Michale Moorcock, in these first three novels has such a deep understanding of his character that he sometimes has a hard time getting that across to the reader. We know what sets Elric apart from the common people of the world he inhabits, but understanding his motivations and empathizing with him is sometimes hard. But for all of that, Elric is truly a great character, and the reader enjoys reading about his exploits, and has no trouble rooting for him, even when his moral compass takes a few dips into gray area.

My second is this: It is OBVIOUS how much of an influence Moorcock's writing had on Role-playing games like TSR's original Dungeons and Dragons supplements. People point at Tolkein and Howard a lot when they site the influences of D&D... but Moorcock's Elric with his magic use, and environments, and intelligent magical weapons, and plane-hopping, and several other elements... is just so completely a catalyst for role-playing as we know it. And I love that about it. It almost deepens the experience for me in a pilgrim-visiting-the-holy-land sort of way. You can very clearly see the bloodline of outsider D&D heroes like Drizz't Do Urden tracing directly back to Elric of Melnibone.

If you love Pulp Fantasy, you will love Michael Moorckock's Elric novels. I am already dying to get my hands on the next couple of volumes in this collection, and I haven't even started the second one yet! I paid 2.99 for each of these books. 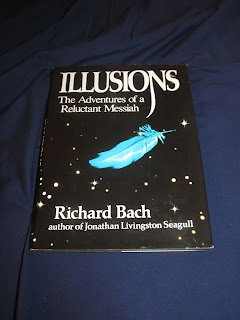 Next we have Richard Bach's Illusions "The Adventures of a Reluctant Messiah". This book is one that blew my mind and broadened my word view, and made me realize that the concept of "religion" vs. "faith" is a tricky, tricky thing.

Illusions is almost all about belief and perception, and how our faith should not be in just some higher power... but in our own personal reality and our own personal effect on it... to the point where that can be a religion unto itself. The funny thing about this book is it reads very much like a modern tale of fantasy, with a couple of small-time pilots who drift from town to town meeting and having a very-similar-to-magic sort of effect on each other. There's nothing preachy or pushy about it. It's simply stated and well characterized, and makes you think without forcing you to think one simple thought.

If the name Richard Bach sound familiar, it may be because you've read his other slightly more famous book, Jonothan Livingston Seagull. And the weird thing about it is... it's the same story. Except one is more openly metaphysical and about sea-gulls, where the other is about a couple of barn stormers.

Our narrator "Richard" meets reluctant messiah David Shimota, who he enters into a sort of student/teacher relationship with. He finds out why David is a reluctant messiah, and why he's become jaded with his duties. They help each other grow past some issues, and David ends up following a pretty typical path expected of a messiah who challenges the world to think past its fears and innate need for personal limitations.

I actually read this book back in high school, and have read it 2 or 3 times again since then. It never feels old or irrelevant to my experiences. I found the copy I currently own at Goodwill in hardcover for 1.99.

I'll be back real soon with more Goodwill Goodies! Until then, dear readers, Happy Hunting!
Posted by Derek Ash at 6:08 PM