Goodwill is of course a donations based operation, so the items you are buying from them are second-hand, as in they once belonged to someone else, odds being in the favor of complete strangers.

When I shop there, I'm pretty careful about checking items over for damage. I miss things from time to time, like the last few pages missing out of a Finding Nemo Little Golden Book that just broke my heart. I'm also looking to make sure pages haven't been colored on with crayon, or covered in stickers, etc.

I'm fine with books given inscriptions. I like the idea of books being handed from one person to another, and the history of that being recorded in the book. Gifts for kids, for girlfriends, for graduates, or for whatever.

Occasionally though, I find things written in books, or left behind in them that gives me pause. It lets me look into the life of a complete stranger in a way that feels like a little treasure all on its own. 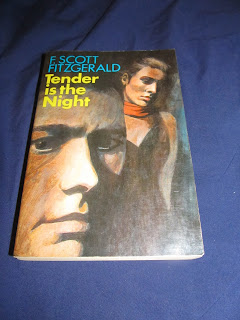 For example, I picked up this copy of F. Scott Fitzgerald's Tender is the Night at the Belfast, ME Goodwill for .99 cents. It's bigger than it looks, more of a trade paperback than a "pocket" size. I picked it up for a handful of reasons. First, I just really like F. Scott Fitzgerald's The Great Gatsby, and I've never read another one of his books. Second, I love the look of the book and its cover. It has this great old-style feel to it, and indeed, this copy was printed in 1962. The pages are rough and yellowed with age, and the cover has this art-house feel to it I just really dig on. But what really sold me on the book was this: 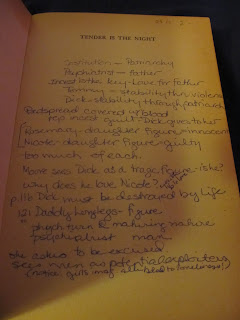 When you open the front cover you find a handful of someone's notes. Interpretations of the text. Notes for an essay, or from class. I love this sort of thing. It gives me insight into someone else's experience with this book. You can see a lot of psycho-babble about incest and bloody bedspreads scribbled here, and what various actions and images in the book do to help build themes throughout the book. It also turns this book into something more of an artifact for me. A piece of human history.

That's not even the best example of what I'm talking about though, because then there's this: 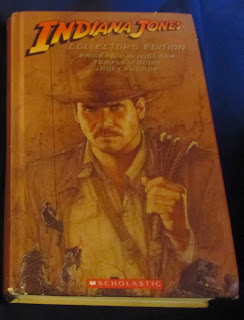 It should be fairly obvious why I picked up this book. It's a collected edition of the YA novelizations of the first three Indiana Jones movies. I do actually plan on reading this to see how they are, though my hopes are not exactly sky high. Movie novelizations don't usually do much for me. But I mainly bought it with dreams of reading it to or with my sons someday to get them hooked on Indiana Jones as well. I picked this up NOT at a Goodwill believe it or not, but at a little thrift store called Nice Twice. I paid 1.99 for it. And when I got it home, I discovered I had not only bought a book, but a... 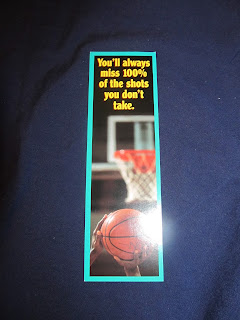 Bookmark! You remember these, right? These came free with a lot of school book orders, and so were given out by teachers as rewards in class, or by librarians... or whatever. They came in perforated sheets of like, 8 or 12 bookmarks, and they had cartoon characters, or sports stuff on them, like the one above. This one is a motivational phrase that I happen to agree with: "You'll always miss 100% of the shots you don't take" Which is a fancy way of saying, if you don't try, you fail by default. It's when you flip over this cheap cardboard tchotchke that the real magic appears though: 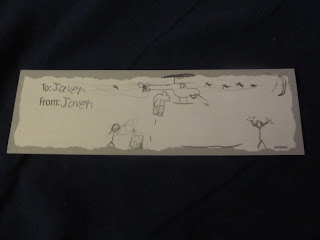 Apparently this bookmark was given by someone named Javen... to someone also named Javen... which seems like it's either a fantastically incalculable coincidence... or he just gifted it to himself. And if I may take some liberties and interpret his art work, I would assume that the smiling stick figure on the left is meant to be Javen himself, as the packages being dropped by the helicopter above have initials beginning with J on them. And I will assume that the speech bubble containing "TY" is meant to be a thank you. It is night. And what's happening to stick figure on the far right is anyone's guess. But I'm assuming the helicopter may be using the gun turret on its front to "stick 'em up" or... stick figure #2 is simply trying to get helicopter's attention. Not sure.

But do you remember those boring afternoons in class when all you had to get you through math at the end of the day was doodle in your notebook, or (God help you) in the margins of your textbook? Or on a crappy bookmark that told you not be be such a whiny Quitter McQuitterson?

I sure as hell do. Which is what makes this item so cool. It's still stuck right in that book, and until I start sharing this book with my kids, that's right where it will stay. These are just some of the weird little scraps of human ephemera you are exposed to when you buy your geekiness second-hand.

That's it for today folks! I'll be back soon with some more Goodill Goodies! Until then, Happy Hunting!
Posted by Derek Ash at 12:42 PM