Welcome back to PIRATES!!! courtesy of the League of Extraordinary Bloggers topic of the week. 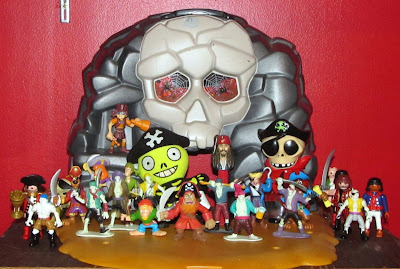 This is part two. Admittedly, I think I may have topped out in Part 1 with my fictional history of a group of cheap pirate toys that I worship above all others. Now I feel like parts 2 and 3 are just all sort of sloppy seconds (and... thirds I guess?). Well there's nothing to do but put a bag over its head, grit our teeth, and plow on into it. Let's get this over with. 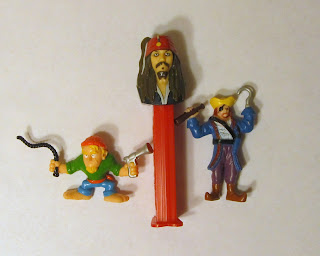 I'm opening with a Captain Jack Sparrow PEZ dispenser. Remember when there was only one Pirates of the Caribbean movie in existence and it wasn't a suck-fest? Well, I do. And that is why I was excited to find a PEZ dispenser with Capt. Jack's head on it. Think really hard. In recent years, can you count on more than one hand how many PEZ dispensers have flesh-and-blood characters from live-action movies? And I'm not counting masked characters from Star Wars. Darth Maul counts, and the Emperor... but beyond that, enlighten me. So this PEZ dispenser is a pretty big deal. There's also this ADORABLE little pirate guy on the left that came in a grab-bag from Goodwill, and a hook-handed pirate that I don't remember how I acquired. 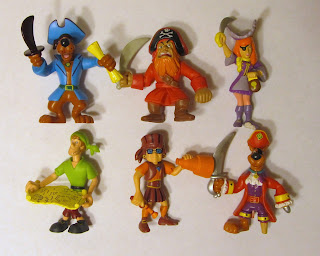 Up next is a set of Scooby-Doo Mystery Mates figures in pirate garb, including not 1 but 2 different versions of Scooby-Doo and not 1 Fred at all. Top center is Redbeard the Pirate. Daphne zazzles it up a bit in a purple pirate get-up, Velma inexplicably throws on some stripes, and Shaggy ties part of his shirt on his head. Redbeard is really the only one that gets much display time in the Cave. But now seeing them all together in a big pirate display is making me fall in love with them more than ever. 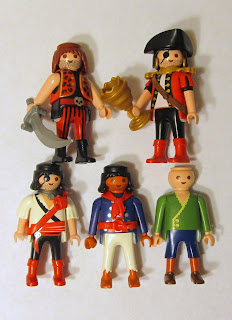 These guys are the Playmobil pirates that came with the giant skull cave you see in the group shot above. I paid 1.99 at Goodwill for the set. The only 2 really adequate pirates in the set are the top 2. I think of them as the Mick and Keith, and the other three are just the other Stones (except for old Bald-top down there... he's just not in the band at all). The set came with a rowboat and some pylons to click into the beach to create and awesome pirate-cove hideout. 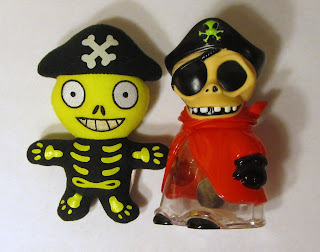 Here's a couple of grinning skeletal pirates with mischief on their minds. The green one on left is from the Pirates of the Caribbean Happy Meal series, and was found this past Halloween season at Goodwill. The one on the right I found at CVS years and years ago in a lame assortment of other Halloween-themed character banks. He stood out as a grinning paragon midst a bunch of cheap looking witches and lame Frankenstein's monsters. He saved me that day. I like to think I took him home... but the truth is he took me home. He's just another generic, cheaply produced Halloween toy (he was full of gumballs, and doubles as a coin bank... that's a fake pirate doubloon in his belly) but he is another fine example of an inspired sculpt in a throw-away seasonal item that was never meant to be special. The tears are streaming down my face as I write this.

Phew. That wasn't so bad, now was it? All right, next up... there will be books. Part 3 is coming this weekend. So if you're not into books... don't come to the party.

What are some more of the League saying about Pirates? Let's see:

- Jaime of Shezcrafti did a run-down of some of the most ear-drum destroyingly awesome pirate songs ever sung (sang? sung).

- Iok of plaidstallions shows us a set of Matchbox action figures that immediately set me drooling.

- And Dex over at AEIOU and Sometimes Why introduces us to a Scottish "pirate metal band. You have been warned.

I'll be back soon with more Goodwill Goodies! Until then, Happy Hunting!