It's Beginning to Feel a Lot Less Like Christmas...

So I'm almost done with my Christmas posts, the final one being my actual Christmas Haul... but this post is probably one of the ones that is most near and dear to my heart. My Dork Horde Secret Santa package! I felt the D.H. Secret Santa was a personal success, because I really enjoyed getting some things for my assigned person, and I felt the stuff I received was just cool as hell. So if Reis puts one together again next year, I will definitely be throwing my hat in the ring. Between this and the AEIOUWhy Great Pumpkin Gift Exchange, and the general generosity displayed by a bunch of my new blog-network friends, this has been a great year for receiving cool swag in the mail... which I did not expect when I started this blog. So anyway... on to the package: 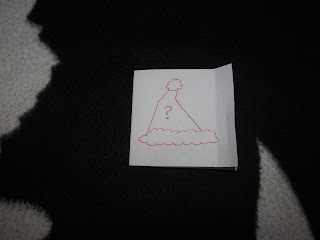 I still don't know 100% who my S.S. actually is. I THINK I've Sherlocked it out at this point... but I don't remember if there was a return address on the package or not, and its long since been tossed out with all of the Christmas garbage we purged weeks ago. This is one of the only two pieces of evidence I have (the other I'll show below) to help me guess. 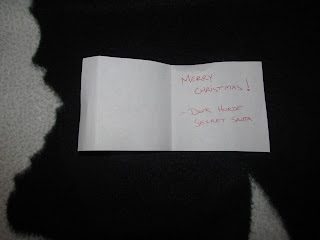 So from just this... no idea. My first thought was Brian from Cool and Collected. I was his Secret Santa, but I wasn't sure if Reis would simply pair us up, or if he'd mix things up a bit more. The contents of the package certainly match up with what I might expect from Brian though, since I just bought some vintage action figures from him a while back (still need to do a couple of posts about THAT as well!) and a handful of these certainly fit that mold. Let me show you what I got though and then I'll discuss the final piece of evidence: 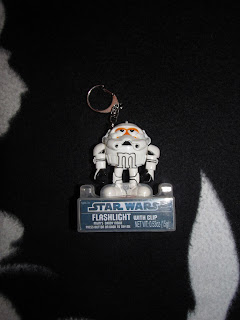 First up, a BLINDINGLY BRIGHT Star Wars M&M flashlight. I discovered it's retina-melting properties while looking for the button to turn it on, shining the beam directly into my eyes. I wish I was kidding. As you can see, this is Orange the M&M, dressed up as a classic Storm Trooper. Since I love the M&M characters (actually almost all food mascot characters, especially anthropomorphized food characters), and classic Star Wars... this gift alone would have been pretty frickin' amazing. But wait! There's more. It get's more frikkin' amazinger. 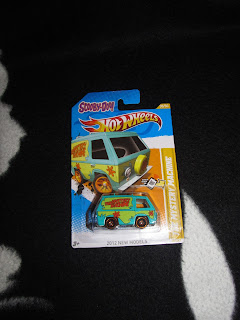 I'll confess, this is not my first Hot Wheels Mystery Machine. This was the one item I received that I already actually owned, and I immediately felt guilty about it. I had been desperately looking for this sucker for weeks before I finally found a handful of them at a Walgreens (Which will be my first stop when looking for obscure Pop-Culture Hotwheels from now on... as it was an unpicked paradise of Hotwheels). I picked up one for myself, one for my son, and one to give away in the near future here on the blog. I think this one will also be paid forward in a giveaway... so if you're still looking for this Hotwheels, keep your eyes peeled in the future. I'm going to make sure this goes to a good home. 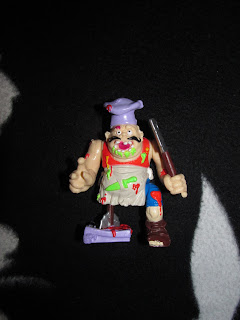 Next up, the beginning of the vintage-y goodness. Pizza Face!!! From the classic Playmates line, Pizza Face is a crazed Pizza Chef who zapped himself with retro-mutagen ooze. I had him when I was a kid, and he always confused the hell out of me. I love the figure, but I was never sure what his deal was supposed to be. But look at him. He is disgustingly awesome. He almost looks like he would have fit in better with the Toxic Crusaders line. 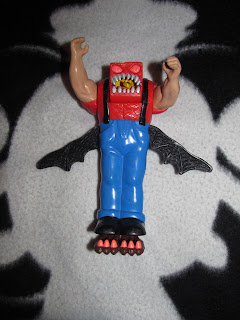 Next up is Hard Hat Horror, one of the Haunted Human action figures from the Real Ghostbusters Toy Line. I am a Real Ghost Busters NUT. I had a ton of the toys when I was a kid, but I never had Triple H. I had Granny Gross, which was one of my favorite action figures of all time, but no other actual Haunted Humans to speak of at all. Seeing this guy up on my shelf with the rest of my Real Ghost Busters collection makes me grin ear to ear. But... 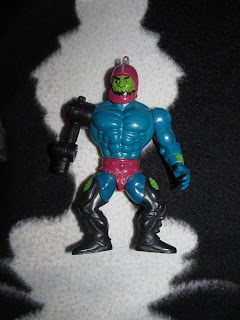 I think one of the best items to come out of this package has to be this Trap-Jaw figure! I was stunned when I pulled this out of the box. I honestly cannot remember if I had Trap-Jaw as a kid, which leads me to believe I probably didn't. But as I considered him to be one of Skeletor's main 3 generals (Mer-Man and Beast Man were the other two) I would have desperately wanted him if I did not in fact own him. So this... is sort of a dream come true. 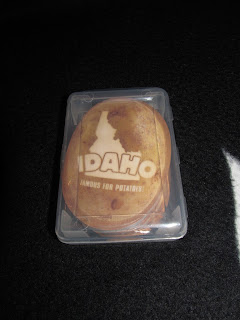 Here's... where things get confusing. I feel like this is supposed to be a hint, leading me to understanding who my Secret Santa is. OR it's a deck of cards shaped like Idaho potatoes just for the same of being weird... which I just don't feel is the case. If I'm right... Then this package did not come from Brian, because he's not from Idaho. It's also not from Jaime Hood, who is also not in Idaho. Reis O'Brien? Not in Idaho.

Once I eliminated those three (and myself) it left me with no less than 17 other possible Dork Hordites to choose from. And then... something started rattling around in the back of my skull. Something I remembered from someone's blog somewhere... some mention of Idaho. Some video about storm chasing. So I started going through the Dork Horde Membership trying to remember who lived in Idaho. I realized there was a criminally large number of blogs I was not yet following in my blog-roll. So I corrected that. AND...

I think I found my Secret Santa. Dan from The Toy Museum!!! If I am incorrect, I am going to be so embarrassed. He's got an amazing blog, and an amazing love of toys. Dan, I hope I guessed correctly, and if I did... Thank You for my most excellent Secret Santa Package! I feel like we've crossed paths somewhere in the past, commenting on blog posts or something. Like... I should have figured this out sooner. Oh well, c'est la vie! 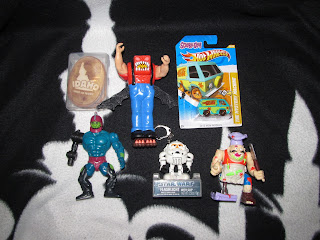 Here is the entire contents of the awesome package I received. I found it to be an AMAZING haul. I hope everybody else who participated got such a cool lot of stuff!

I'll be back soon with actual Goodwill Goodies (at some point... I still want to blog about my Christmas presents!) so until then, Happy Hunting!