It's League of Extraordinary Bloggers Time once again!!! Last week we had the simple topic of "Cowboys". The week before that (which I did not participate in) was "Spies". Do you see the pattern forming?

So what is this week's single-word topic for the League?

So in the same vein of last week's response from the Goodwill Geek, I scoured the cave in search of items that fit the bill. I think I did way better this time around. There are waaaay more men (and things) from space in the Cave than cowboys.

First the group shot. Here's absolutely everything I could find within the confines of the Cave I call home: 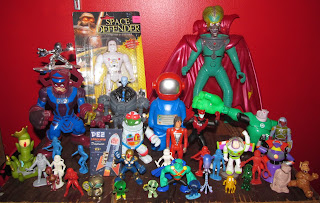 First of all, I want to point out the absolute lack of robots. Robots may appear in space but are not distinctive to space. I also went for more variety than quantity, so my entire Star Wars Galactic Heroes collection sat this one out, along with all but one item of Star Wars in general. And while there is a definite Green Lantern presence, and an Action League figure, I left out the Green Lantern Action League figures I featured a short while back. And even though he got to sit in on this picture, we won't be talking about the Mars Attacks figure I mentioned back here. 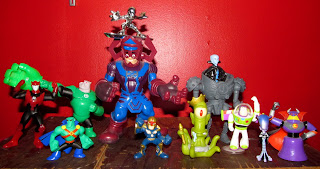 So I'll start with the animated spacemen. from left to right we have Red Lantern Razer and Green Lantern Kilowog McDonald's Happy Mean toys from the Green Lantern animated series. Up front there we have an Action League Martian Manhunter. Next up we have Super Hero Squad Silver Surfer, Galactus, and Nova. Then we have Burger King Kang dressed as the Burger King for Halloween. Peaking up from the back is MegaMind from McDonalds, in his exo-skeleton. Flanked by the Buzz Lightyear and Emperor Zurg Toy Story Buddies, we have villainous Gallaxhar from the Monsters Vs. Aliens mini-figs line. 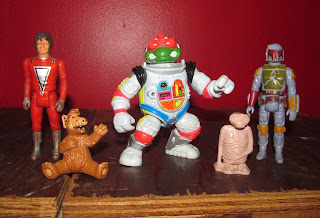 Here we have the vintage figures of the collection. From right to left, a 1979 Mork action figure. A sitting ALF figure from 1988. 1990 Raphael the astronaut. An E.T. pawn from the 1982 E.T. board game. And a mail-away Boba Fett from the 1979 toy line. These guys are some of my favorite toys in the Cave. 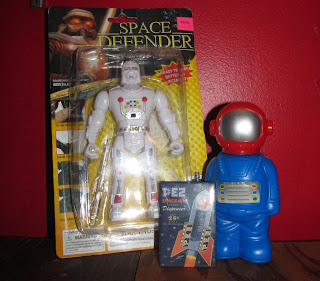 Some of the oddball larger toys: A "Space Defender" figure who is really just a super cheap albino Darth Vader figure I picked up at a local chain store called Reny's. Also a PEZ spaceman magnet my wife bought me years back for my birthday, and a Target dollar-bin astronaut who used to be a bottle of bubble-blowing solution.

Aaaand here is a collection of cheap toys such as coin-machine aliens and bagged spacemen that may or may not be vintage themselves. Loves these little colorful guys, and they all reside currently on the knick-knack shelf above my desk.

That's everything I could find folks! That is the entirety of my "Spaceman" themed toy collection. I hope there's at least one thing here that makes you smile.

Now check out what the rest of the League had to say about Spacemen:

- Rich at Fortune and Glory (Days) throws some vintage E.T. memorabilia all over everything.

- Michael at Memories of Toymorrow just KISSed off the whole assignment.

- Hobgoblin at the Monster Cafe has little plastic spacemen (they look sorta familiar) on the brain.

I'll be back soon with more Goodiwll Goodies. Until then, Happy Hunting!
Posted by Derek Ash at 6:45 PM