The League of Extraordinary Bloggers has another single word for this week's topic. So it's time for PIRATES!!! Hoo. I need to get myself under control. This blog post may get a little... extended. In fact, I may have to drop a few... parts all up in here. I'm offically breaking this post into 3 parts. THREE PARTS!!! I'm excited.

PIRATES!!!
(I may have added my own enthusiasm)

I voted for it! And the Pirates have it!!! So heeeeeere we go!

First up I scoured the Goodwill Geek Cave for any toys pirate in nature. This is what I turned up, although I'm only focusing on a small fraction of the toys pictured here in tonight's post: 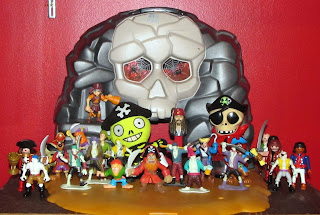 Honestly part of why I was excited to do this post was simply to put the spotlight on these fine fellows: 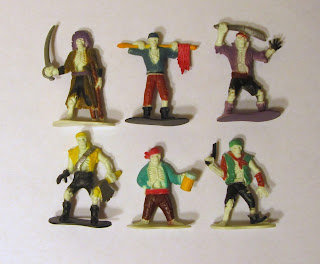 A set of 6 plastic skeletal undead pirate figures. I've mentioned them in passing before (probably around Halloween. Oh thank goodness this post didn't happen around Halloween... the decorations we have packed away!) but these six figures are six of my most prized possessions. They came out of 2 cheap 3-packs of toys found at a local branch of salvage and overstock stores called Mardens here in Maine.

They came with the crappiest accessories, including an easily broken treasure chest, a row boat, and some other crap I promptly chucked. Because it was ALL ABOUT THE EFFING UNDEAD PIRATES. Aaaand.. since the last time I might have mentioned them on here... they've developed personalities, back stories, and names. Enjoy. 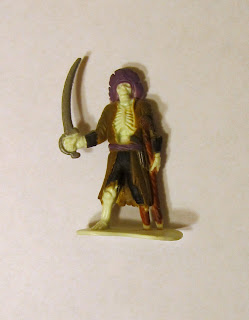 Here's Captain Scaggs. He's the leader of this motley crew. He lost his leg to a skeletal ghost shark. He keeps his crew in line with a combination of abuse, liquor, and sheer menace. He also has a collection of pristine-condition left-foot boots and shoes. 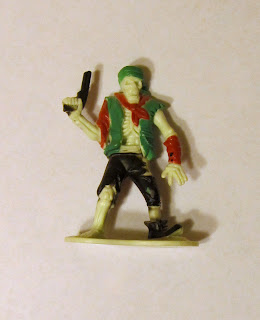 This is Pot-Shot Pete. He can take out a crow's eye from the crow's nest. He is an ascot enthusiast, and often steals left shoes from Captain Scagg's collections. Shhh. Don't tell him. 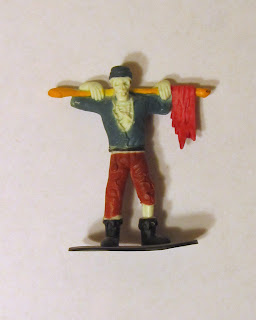 This is Fred. No one likes Fred. He's lazy as f--k. Look at him. Can't even hold that flag upright. I'm so sick of Fred. Everyone is. But he's Captain Scagg's nephew. 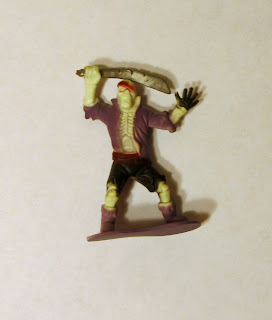 Here is Cortez. Here is his Machete. He has empty eye sockets but wears an eyepatch. I suppose he could look like One-Eyed Willy from the Goonies under there, all smooth bone... but everyone is seriously scared of Cortez and no one dares ask him. He's kind of unstable and no one knows how to tell them they're concerned. 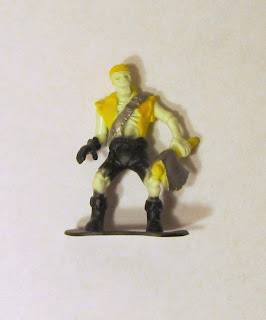 Here's Crowley Loblolly and his hatchet. He's the ship's surgeon and ironically, loblolly boy. He has a crush on the submerged, skeletal remains of a girl named Molly. If they get married, her name will be Molly Loblolly. 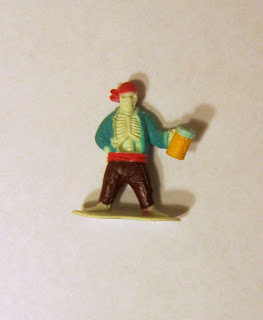 Here's Pint. He likes to party. He's the ship's cook and he likes his beer. He is a child's toy brandishing a frothy mug of beer. He is a dwarf. ALL other toys are invalid.

Honestly, I love these guys because they are detailed, have nice paint, and personality out the EARS. It's even more amazing when you consider they're just cheap blister-pack toys from a discount bin at a salvage and overstock store. These guys are insanely cool.


Here's what some other members of the League are doing with "Pirates":

- Newcomer to the League, Jon B over at the Wombat Corkshop (That doesn't sound right...) literally dug up a buried treasure and turned it into Pirate Gold.

- Rich at Fortune and Glory (Days) reminisces about some of his favorite childhood pirate cinema  and I have to say, I like his choices. (What no Goonies?)

- Grey Endres, yet ANOTHER League newcomer, features a pirates-themed game on his blog, Achievements in Gaming!

This was only part 1 of 3 of my Pirate extravaganza!!! I'll be back very soon with more awesome Pirate Goodness! Until then... AAAR me mateys!
Posted by Derek Ash at 7:54 PM