So... this may be sort of interesting. The Muppet Wiki has a large list of toys that Illco produced featuring the Sesame Street characters back in the early 90's. That list however, does not have the following toy: 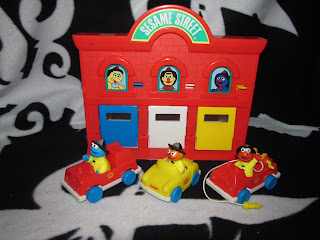 I picked this firehouse set up the same day as the farmhouse set I featured here. I know even less about it... and to be honest, I'm not as in love with it either. Searching it on the internet turned up one eBay listing, and even more references to a playset produced in the 80's by CBS toys, which was totally unrelated to this one. I don't usually buy things I don't care about since I'm already running low on space, but the price was right, at 1.99 for the whole set... and well... It's Sesame Street. 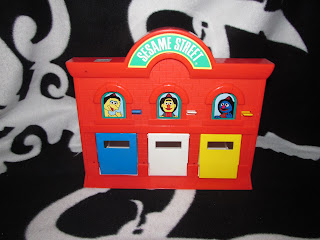 So just like the Sesame Street Farm set, there's an Illco production stamp in the bottom, but no date. I'm assuming it was from the same time (and probably donated by the same person). Here's a shot of the firehouse itself, all in red plastic with the exception of the doors. Big Bird, Bert, and Grover are all peeking out the windows above. I have to say I was surprised and impressed that the stickers on both this and the Farm sets were in such great shape. No peeling, bubbling, water damage, fading, etc. You'll notice little switches on the front of the toy next to the character windows, that match the colors of the doors below. More on these later. 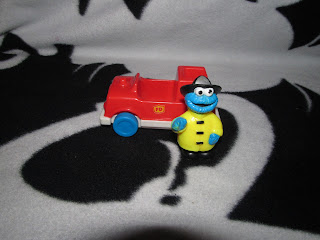 Here's fireman Cookie Monster and one of the two red fire engines included in the set. His engine is missing something, and I am presuming it's probably a ladder. There's not space for a winch like the one we'll see later on Elmo's engine (Also, I am arbitrarily assigning vehicles to characters so I have no idea if this was supposed to be his or not) so I'm assuming they would have made this one a ladder truck. 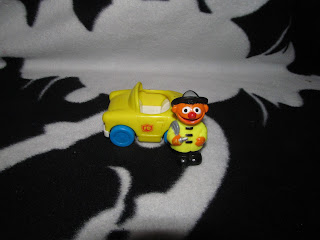 Here's fireman Ernie and what I presuming is meant to be the fire-chief's car. I went with the character who seemed the least scatter-brained or ruled by his id... and Ernie's who I came up with. So... he's fire chief even considering his ducky addiction and penchant for torturing his roommate in increasingly imaginative ways. He probably should have gone with the ladder truck, as he's the only character actually HOLDING a hose, and as you will see the next truck comes with one attached. 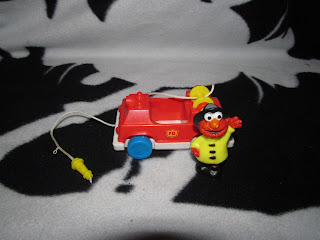 And now that I'm examining the hose, it looks like it was possibly meant to fit in Cookie Monster's hand... so I've screwed this all up. This blog post is ruined! RUINED!!!

Anyway, there's a winch to wind the hose in on. And here's Elmo who is most likely supposed to be fire chief because he's Elmo, and was becoming insanely popular by that time... even though I can only barely stand the modern version of the character.

The fire station has spaces in behind the doors with ramps where the cars rest against the doors until the switches above are flipped. Then the fire squad rushes out to address any imaginary infernos a child's mind may cook up.

I don't find the figures as interesting as the ones that came with the Farm set, and the whole thing feels like it's designed for a slightly younger age group. But it is cute, and it's juuuust old enough for me to justify it as mildly vintage.

It's going in storage for now until I decide what to ultimately do with it. And well, that's all I really have to say about this set and all I have to say tonight. (I'll be interested to see how this reads in the light of day when I wake up tomorrow).

I'll be back soon with more Goodwill Goodies. Until then, Happy Hunting!
Posted by Derek Ash at 4:45 PM