So today I want to focus on just one great find I made a week or two back (time has begun bleeding together during the move, so I'm not 100% on when I picked this up honestly, I just know it was recent). I was skimming the game board section in the toy department when I noticed a LEGO logo beaming at me from the end of one of the boxes. I pounced like a grizzled highwayman on a pampered and plump prince dripping with jewels and riding alone down a dark wooded path.

Meaning: I picked it up and looked at it and discovered it was: 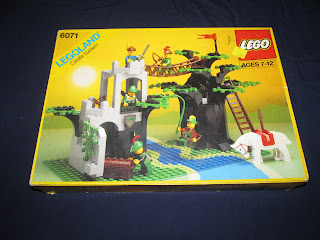 See More Details After the Jump!


When I was a kid, LEGOs were entirely too expensive to be the kind of thing my family spoiled me with. Fortunately (for me) I had lots of friends whose parents did not feel the same restraints, and therefore I would occasionally head home from visiting one of those friends with a (gasp!) LEGO mini-figure or two stuffed in my pocket. One of my favorite figures that I am almost ashamed of admitting to procuring in this fashion (Hey, I  was a kid, I'm willing to cut myself some slack here) was a Robin Hood figure which I dubbed "Prince" at some point. He had the little pointy hat and everything. This would have been earlier than 1990, so the one I snagged would have been from one of the earlier Forestmen sets. That guy went on to be one of my very favorite toys of ALL TIME. I can not overstate this fact enough. I will do a post some time on the pocketful of heroes that I was obsessed with back then, who Prince was lucky enough to number himself among. But the original Prince was lost long ago, and I have some other green-dressed LEGO man as his stand-in on my shelf now. So when I found this set I was pretty excited. 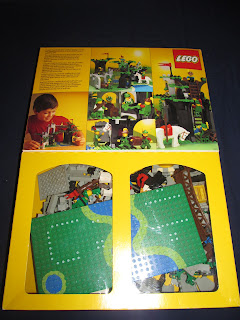 I gave it a quick flip open to see if it looked like the pieces were all there. I love Goodwill, but even I am not stupid enough to drop 6 bucks on a box of LEGOs that aren't what I think they are. I'll post more about the excitement of mystery LEGOs in the future, but today, let's assume I really wanted what was advertised here. Giving it a quick shake-around I was pretty satisfied, so I tossed it on the pile with other items I was picking up that day (including the giant sheet-covered one from last post) and paid. 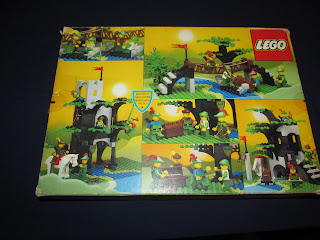 When I got the kit home, I couldn't WAIT to open the box and see what was going on in there... but I held off long enough to get pictures before sucking the packaging. I love the old style LEGO packaging, first of all. I don't know if LEGOs still come packaged this way, but the window front box with the lift-up flap is a great way to see what your getting, and then a nice sturdy slide-out tray to preserve the packaging while not simultaneously dumping LEGOs every which-way. I also love all the various set-up options they give you on the back, so parents don't feel like they're buying this static one-trick pony for their kid. 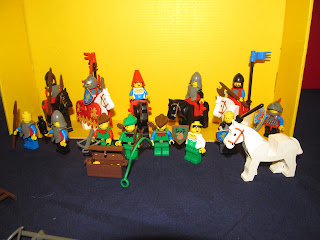 So these are the mini-figs I found in the box... which was only supposed to contain 4 Forestmen, 1 Forestwoman, and one horse. As you can see, I was short a Forestman... and my Forestwoman is missing her original sleeves and hat. Not many of the original Forestmen accessories have remained in the set, meaning quivers and bows were a bit scarce... but hey, I gained 8 mostly complete Kingsmen, a princess, and 5... count them... 5 extra horses! 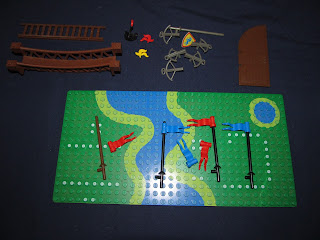 Plus, HOLY CROSSBOWS! There was also a pile of lances included, and plenty of other weapons and accessories for the Kingsmen. So I look at all these characters and pieces, and think I've already got a complete set to tell a story with... which I love. I can just imagine the Princess and the Forestwoman are related somehow, like twins separated at birth, or just identical like the prince and the pauper... and there are the heroic forest men who have to fight off the slightly sinister Kingsmen, including bearded, belching Bertram the Boisterous. 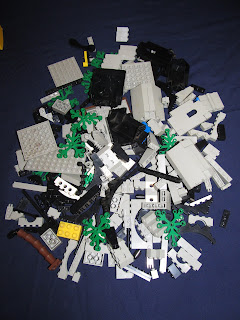 Here's the pile of bricks... which definitely seems to be enough to put together the entire river-crossing tree-fort pictured on the box... and then some. I might be short some foliage... but I still think some other LEGO Land Castle System sets donated a brick or two to this box before it was donated. Hence the randomly included door. 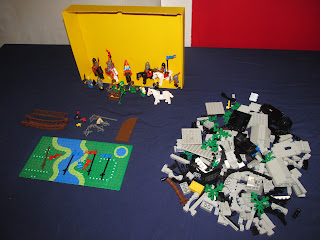 Here's the set in all it's glory. I was very, very happy with this purchase, and feels it deserves all the trumpeting and attention I'm giving it here. LEGOs are just one of those incredible, classic toys, and any chance I have to update my collection with a set like this... I do cartwheels over.

So that's all I got today. I'll be back soon with some more Goodwill Goodies. Until then, Happy Hunting!
Posted by Derek Ash at 1:58 PM