Want A Sneak Peek of the New Cave?

So I have literally one corner of my new Geek Cave set up. This I've been doing in my spare time, away from trying to get the rest of the house set up. I've made more progress since these pictures were taken, but I'm going to do a big reveal here in the upcoming weeks, and thought I'd just give you guys a little taste for today:

See the Goodwill Geek's Cave Preview After the Jump!

So here it is in all its (partial) glory: 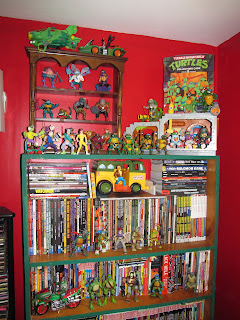 This is the shelf dedicated to my Graphic novel collection and TMNT collection. It's still looking a little busy and cluttered to me, so when I have a chance, I may spread things out a little more. 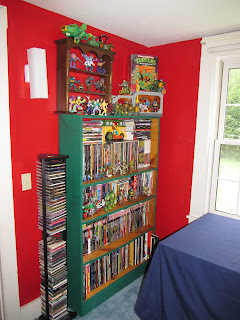 Here's a larger shot so you can see the full TPB collection. There's also a tower containing some of my favorite CDs which I'm not willing to let go of (hence they have been relegated to the cave). Under the sheet is something so amazing... so, mindblowing... so... bought at Goodwill... that I will be featuring it in its own blog entry another day. I actually didn't even cover it with a sheet to conceal it from view. I was taking some pictures for the blog and spread the sheet out to photograph smaller items, and just forgot to remove it for this shot. It worked out in my favor though. I'm just not going to say anything and pretend like I did it on purpose.

So on the walls you can see the red I chose (my wife surprised me by painting this room for me while I was a work one day. She kicks so much ass!) Here's what it looked like before (we're not looking at the same corner in either of these pics, but you get the idea): 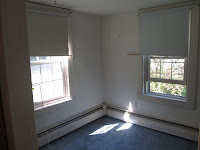 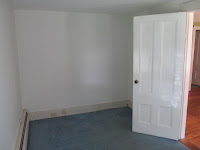