The Purchase That Started All This...

So just a quickie tonight, as I am still in moving Hell...

But I've teased a couple of times about a great item I picked up at the Grand Opening of the Ellsworth, ME Goodwill. I mentioned back when I talked about those crazy ladies who bought up all the blanket checkers (go read it, I'll wait... look for the picture of the checkers, look for where it says "GET COMFORTABLE. THIS IS A STORY... and read from there.) during my first trip into the store. Well, my consolation prize, and the item that made me decide this Goodwill place was probably a store to check out again in the future (I wasn't at crack-head level yet... it was the bag of wonders in the display case I talked about awhile back that put me into that category).

So what was this item that gave me solace at a couple of nattering old nutcases made off with MY blanket checkers? Well, here's a vague hint:

See what it was after the jump!

We were hovering around the game-board section when I saw it: a red box, about the size of a cigar box, that was obviously tucked in with the game board boxes but not one of the game board boxes. I saw the DC logo and grabbed. What I pulled back in my hand was this: 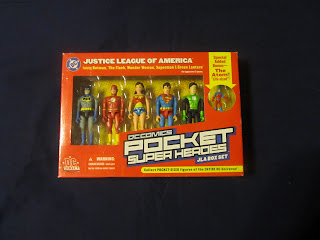 The DC Comics Pocket Super Heroes Justice League of America Set, from DC Direct. Included are Batman, The Flash, Wonder Woman, Superman, Green Lantern, and a "Life-Sized" Atom! They are formed in a stiff, almost Playmobil style, with more detail and sculpting.

I had them out of the package for a while, because I usually prefer to display toys in that fashion... but I found them much more charming and fun in the package for a change, so I put them back. I like that little window and how proud DC Direct seems to be that the Atom is "Life-Sized!"

The only thing I don't love about this set is Kyle Rayner. That should totally be Hal in there. I have nothing against Kyle, but he sticks out like a sore thumb in this set.

But anyway... I need to wrap up. This item was the first official Geeky purchase from the Grand opening of the Goodwill store that would eventually turn a mild mannered average Joe into the Goodwill Geek. So many purchases would follow, but this was the one that really started it all.

I hope you guys are digging the blog, and what I'm doing with it. I'm trying to wave my Geek Flag with pride, and I'm slowly learning better ways to write about things on here... but the last few weeks have been a real challenge. I hope I'm almost out of the woods, and able to get more stuff featured on here. I have ideas coming out my ears but no way to get them on the blog right now. I've been toying around with the idea of a weekly schedule, and doing shorter posts on fewer items, to be able to focus more, and go more in depth. But before all that can happen, it looks like I may be going totally offline for a few days, until my new home gets internet. SO... this may be it for a few days, this time for real. I might post another collection of movie trailers tomorrow, if I have time... but then there's going to be some radio silence for a few days.

Hopefully I'll be back sooner than later with more Goodwill Goodies! Until I see you all again, Happy Hunting!
Posted by Derek Ash at 7:48 PM