Choose Your Own Adventure!

So... I'm going to feature another collection today. This time around, you may recognize a few recent entries into the blog. Here's a hint: 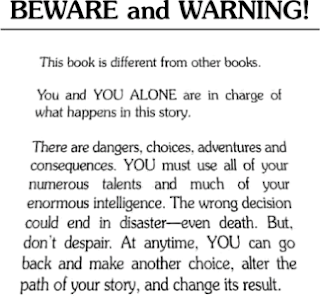 So if you haven't guessed yet, I'm featuring my burgeoning collection of gamebooks, including 3 brand-name Choose Your Own Adventure books, a few ZORK books, a set of TSR's Endless Quest books, and one Forgotten Forest book by Troll publishing. 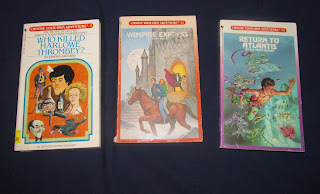 I'll start with the most recent purchases, including a couple of books I've featured on here before. I haven't had a chance to read any of these three books yet, but I'm sooo looking forward to it. Let me reintroduce you to Bantam Publishing's Choose Your Own Adventure books "Who Killed Harlowe Thrombey", "Vampire Express", and "Return to Atlantis". Now, I've already gushed over how excited I am to read a murder mystery in CYOA form, just a few posts ago, so I won't go nuts... but... I'm excited. Vampire express is a reprint, with the original cover looking like this:

Which I think I would have liked to own more. But I'm not going to turn my nose up at those kids on horse-back either. I think I just like the fearsom vampire on that original cover more and the fact that it actually suggests there is a train in the story, for the "Express" portion of the title... though I suppose if you went with the Pony Express you could include the horse? Anyway. Return to Atlantis is a reprint as well, and the original cover pales in comparison to Aqua-Boy there on the cover I own. Check this out: 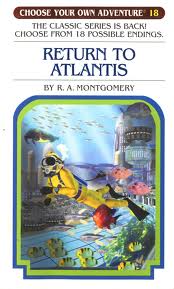 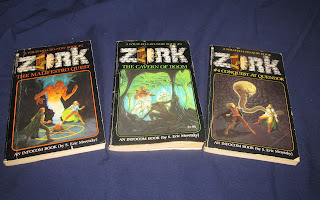 I love the ZORK computer games, and these ZORK Infocom Books are great too. "The Malifestro Quest", "The Cavern of Doom", and "The Conquest of Quendor" are funny, clever, exciting, and genuinely creepy in places... and it was pretty clear that S. Eric Meretzky was having a blast writing them. From the goofy Elves Fred and Max, to the creepy creatures and monsters that menace our heroes... these books are a non-stop fun-filled thrill ride. Don't get caught cheating though! They've built in traps to catch folks who try to make choices that don't jibe with the game they've played so far. Try it some time, and you'll see what I mean. I still hunt for a copy of the first book in the series whenever I hit Goodwill. 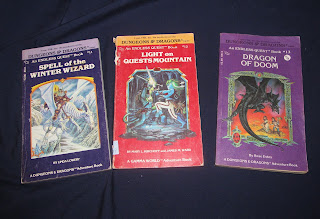 Next up we have a set of TSR's Endless Quest books, based on their gaming universes. In this trio pictured above we have "The Spell of the Winter Wizard", "Light on Quests Mountain" and "Dragon of Doom". The only one I've read before is the Gamma World-based "Light on Quests Mountain" which is a bizarre romp through a strange mutant mountain/jungle environment filled with all kinds of twisted sci-fi tropes. 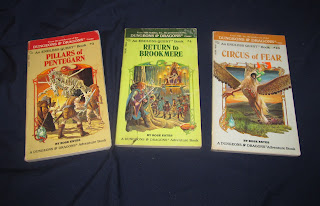 In these next three books, you will find my absolute favorite gamebook of all time: "The Pillars of Pentagarn"!  I had this book as a kid, and I read it until it literally fell apart. I had the perfect, "winning" ending memorized, and even then, I still thrilled flipping through and looking at the creepy pictures of heroes being turned into skeletons or being crushed by giant pillars. Of the other two books, "Return to Brookmere" and "Circus of Fear", I have only read the former when I was a kid, but not the latter. I remember liking it, but that's all. 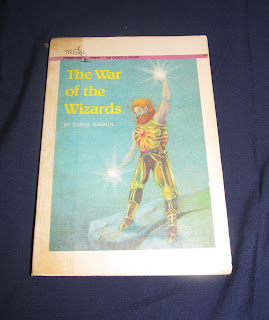 The last book I'm featuring is "The War of the Wizards" which I just today discovered is a part of a series of Forgotten Forest books put out by Troll Publishing. I know nothing about the rest of the series, but I can tell you that WotW is probably my second favorite gamebook of all time. It's a simple story of a Wizard's apprentice tasked with preventing a huge battle royale between a group of elemental-powered wizards. I always thought that Wizards with elemental themed powers were extremely cool, and this book does a great job exploring the concept. I spent an unhealthy amount of time writing D&D adventures featuring the wizards from this book. 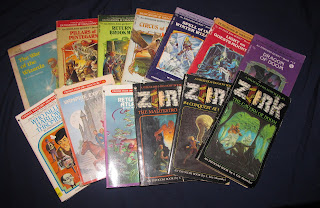 Here's the whole collection hanging out together. That's all I've got for today... but I be back soon with more Goodwill Goodies. Until then, Happy Hunting!