I made a quick trip to the Ellsworth Mardens just the other day...

I was kind of hoping I'd find some of the Masters of the Universe Classics figures I've been hearing about lately showing up at Big Lots. After all, I a few years back I found the only-released-in-Canada third wave of the GI Joe Combat Heroes there: 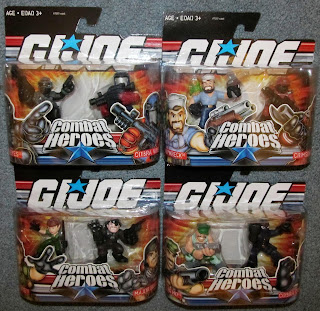 And it's also where I found those Marvel Family and Justice Guild Justice League Unlimited Matty Collector exclusives that I mentioned back in May: 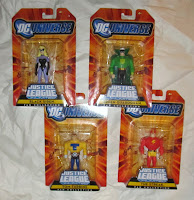 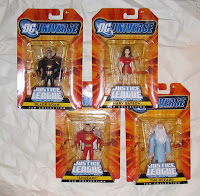 So I was actually thinking my chances were pretty good considering that track record. I don't have any Big Lots in my vicinity so I take what I can get. Mardens is a Maine-based chain of surplus and salvage stock stores... sort of a local clone of Big Lots, hence the weird exclusive toys that show up from time to time.

Unfortunately I was out of luck. BUT I didn't leave empty handed. I made some really great finds that almost-but-not-quite had me as excited as if I had! 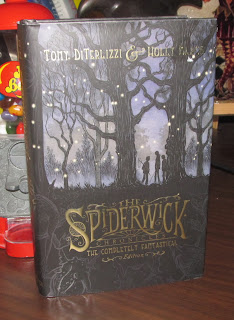 First up they had a pile of these Spiderwick books. I really like this series by Holly Black and Tony DiTerlizzi, but the books are a bit light, and I've been saying for years that they should have just collected all five volumes into one big book and call it good. Well lo and behold, they did just that! I picked myself up a copy for 2.99. There's a lot of great extras included in the back, including a series of other artists' renditions of characters and moments from the series! The stories themselves are good. It's DiTerlizzi's illustrations here that make the world of the book really feel earthy and amazing. The movie that came out in 2008 just didn't do it justice. I think if Henry Selick ever got ahold of this and did a stop-motion version inspired by DiTerlizzi's illustrations... it would be EPIC. Not literally the movie EPIC... which is also about fairies... but the traditional use of the word. 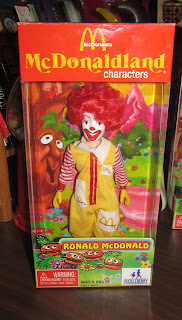 I found a couple of these great, MEGO-esque McDonaldland  Characters from Huckleberry toys. These were produced in 2008 and I kind of LOVE THEM. They only had two out of the five figures available in the set. No Grimace... No Hamburglar... No Captain Crook... But they did have two! Ronald was the first one to catch my eye. To be honest, I'm not as huge of a fan of Ronald here with his rooted Barbie hair, as I am... 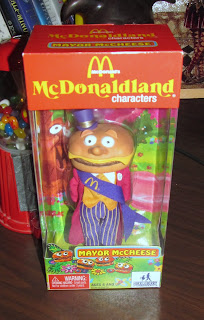 Mayor McCheese!!! I decided I would not be taking these guys out of their packaging as I really like the over-all effect of seeing them in there. Entombed. In plastic. Forever. I miss the old McDonald Gang... I wasn't around for the full-fledged trips to McDonaldLand with the Apple Pie Trees and the Burger Patch... but I remember Mayor McCheese and Officer Big Mac playground equipment! I especially loved Hamburglar and Grimace and Birdie the Early Bird... Sigh. Those were the days. Of course, I've already displayed my love for McDonald's themed Happy Meal toys on here before... and these two McDonaldLand characters look great on that shelf right alongside!

Anyway... I like Mayor McCheese here SO much that I picked up an extra one to give away! Yes! That's right! I'm doing my very first bona fide contest here on Goodwill Hunting 4 Geeks! Mayor McCheese can be yours!!! All you have to do to enter to win is recount your favorite McDonald's memory in the comments below! It can be a commercial, a toy, an awesome visit to one of their restaurants... whatever you want. Just give me a memory and you're entered in the drawing. (And I'm sorry, but "I don't like McDonald's, so let me give you my favorite -insert other random food chain here- memory instead" won't cut it. If you don't like McDonald's wait for the next contest. What would you even want this for?) The cut-off is August 31st Midnight, Eastern time. THEN on September 1st I will draw someone who submitted a favorite McDonald's memory at random from the list (TRULY at random! I will NOT play favorites here, I promise) and notify them here on my blog that they have won their very own MAYOR MCCHEESE!!! It's that easy! OH! And I will mail this internationally if need be, so Hobgoblin of the Monster Cafe Saltillo (and any other readers I have outside the states)... feel free to enter this contest!

Well, I'll be back soon with more actual Geeky Goodwill Goodies! Until then Happy Hunting! And Good luck McDonald's Geeks!
Posted by Derek Ash at 6:40 PM