I recently made another trip to "The Dream Catcher" Antique Mall in Ellsworth, ME. I mentioned The Dream Catcher back in February when I wanted to post some pics of items I've been drooling over there. But this time, I didn't just go to drool. I went back with a specific purchase in mind: a couple of old CRACKED magazines that I had seen there the last time I'd visited. But I ended walking out of there with so much more! 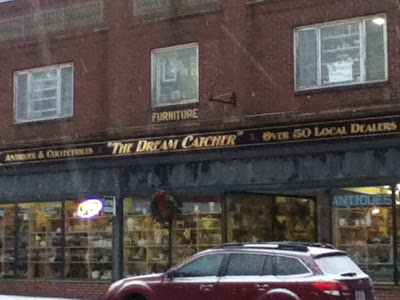 After running upstairs to quickly grab the magazines, I headed back downstairs to find a box of mixed action figures that had caught my eye on the way by. This is the complete pile of stuff I brought home with me after my visit. 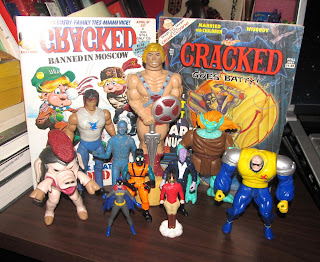 I've been hitting a bit of a dry spell at Goodwill lately. I have to admit. I'm just not finding the vintage goodies in there like I used to. So I thought I'd visit the Dream Catcher, pick up the issues of CRACKED and then see what else they had for cheap. As I pawed through the box of old action figures, I asked the guy behind the counter how much they were, and he said "A buck apiece" which got me pretty excited. 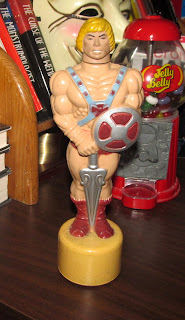 Now, this first item I actually did not find in that box of action figures. This is a He-Man Soaky bubble-bath container from 1985. It cost me 5 dollars. And honestly, I can't think of ANYTHING I would have rather spent 5 dollars on. Look at this craftsmanship. It looks like an Academy Award from the Hyborian Era. 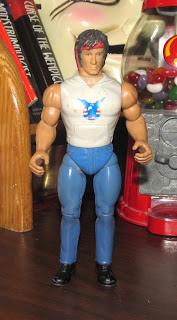 ALL RIGHT!!! Let the 1 dollar goodness begin!!! First up straight out of 1986, we have this John Rambo action figure in his all his Rambo and the Forces of Freedom glory! I like your sleeveless sweat-shirt John, because your shirtless figure makes me very uncomfortable feeling. 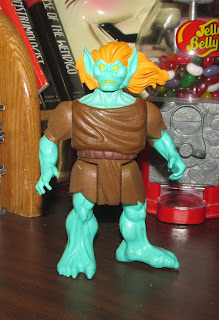 This is the action figure that actually drew my eye to the box. This is a Windhammer from the Silver Hawks line, from 1986. He is next to useless, even if I had his tuning fork accessory. But I like his colors, and he looks pretty bitchin' next to the vintage Thundercats figures I've managed to accumulate so far. He sort of looks like a medieval surfer-dude werewolf, right? 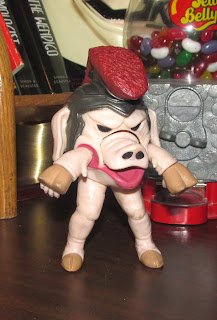 Oh my ever loving F**K. I had NO IDEA what this figure even was when I picked it up. I just knew it was a bizarre pig-ball character with a Roman helmet and sexy legs. And, I might add, nothingh covering his crotch-ital area. Turns out this is a Pudgy Pig Power Rangers figure from 1994. I am not even a little bit of a Power Rangers fan. Sorry. But I F**KING love this toy. I reminds me of something straight out of MadBalls. 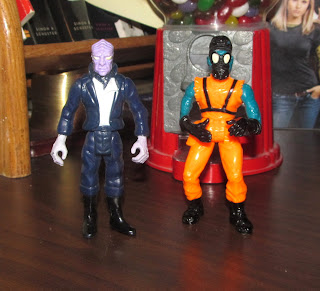 Pawing around in that box, my face LIT UP when I saw this Anton Arcane and Weed Killer from the 1990 Swamp-Thing toy line. I found a color-changing Swamp-Thing at Goodwill last year, and even though these guys are missing their monstrous accessories that "transform" them into monsters, it's nice to have some of Swampies villains to menace him with. I love how Anton's head sort of just looks like a raisin. Weed Killer is the typical Toxic Crusaders/Captain Planet type villain... as eco-aware superheroes were the trend at the time. 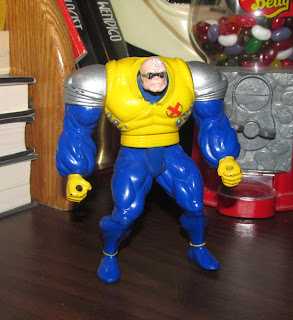 I almost didn't pick up this Strong Guy action figure from 1993. It's a little plain, and while I'm a HUGE fan of Strong Guy, I'm not a huge fan of this action figure... then I was like: "Hey, it's a buck, and what are the odds I'll ever find another Strong Guy toy of any kind? I NEED this." So I bought it. 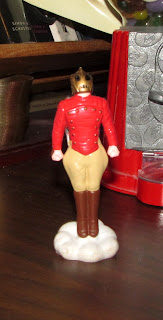 This Rocketeer PVC figure from 1991 was not actually in the box, but he was still just a buck. I found him while I was meandering through the upstairs area of the mall, where I picked up the CRACKED magazines. There was a suction-cup version of the character too, meant to cling to a window... but I ain't got time for that. 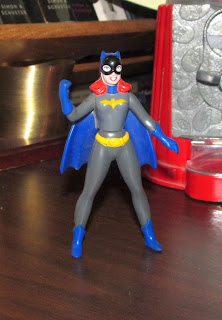 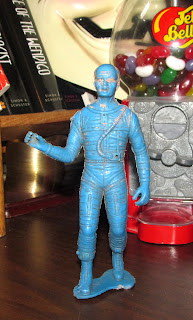 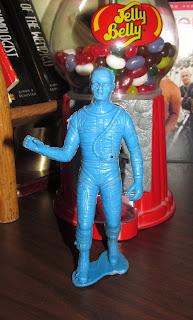 Finally, there's this guy. I have no idea where he came from. I've Googled and Googled and Googled. I picked him up at first because I though he was a Mummy figurine, possibly from the old Marx Universal line. I was disappointed to discover that was not the case, but he's still pretty cool. He's a larger-scale solid plastic playset style figurine. It looks like he was supposed to maybe have a helmet? And something plugs into his gut there, where you can see a hole. I've posted before and after cleaning shots because he was sort of caked in... clay I'm hoping? He looks like he's supposed to be an astronaut, but I have to admit, his dead-eyed face has a kind of creepy quality. If anyone can help me identify this guy, I would much appreciate it!

UPDATE: My inter-friend Anne Packrat did some research and came up with some other plastic astronaut toys. They aren't the same guys, but they are exactly what kept coming up every time I tried searching. I own a few of them, so I'm posting this next picture for reference/scale/whatever so folks can see how BIG this guy is. Keep in mind the guy on the left is about the size of a green plastic army man where my big blue guy is somewhere around 5 inches tall or so. 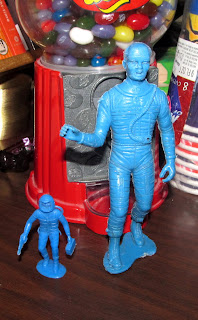 UPDATE to the UPDATE: Well, Anne was right! Or at least very VERY close. MPC makes both figures. They put out the little guys but they also put out the 5 inch line as well, which had accessories. I found a picture of some more of them over at AngelFire.com. Here it is:

That's my guy in green there. The gray guy on the end is an example of a re-release and you can see how the accessories were pegged to the figure and then twisted off for play later.

That's it for right now. I'll be talking a bit more in the future about the CRACKED magazines I picked up, but I wanted to dedicate a whole post to those. I'll be back soon with some Geeky Goodwill Goodies! Until then, Happy Hunting!
Posted by Derek Ash at 9:26 AM