Random Handful: Stuff I Got at Wal-Mart

I went to Wal-Mart just a short while back, and made a few fun finds.

Hey! Not everything I buy has to come second-hand... I just usually look for it second-hand first. Some of the stuff I see out there new just won't wait though. Let me show you what I found: 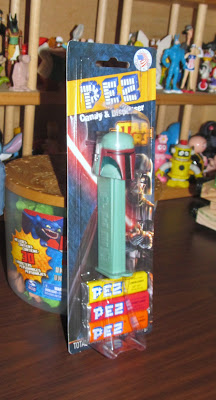 I'm a pretty big PEZ enthusiast, and I am definitely one of the Boba Fett slaves out there who just think he's one of the coolest things about the original trilogy. In fact, I already own a Boba Fett PEZ dispensor, out of its package. When I saw this one at Wal-Mart, I knew I'd finally have one to put up on the wall with Catwoman, Animal, Perry the Platypus, and Inspector Clouseau. It's... a motley crew. Boba here ran me about a buck fifty. 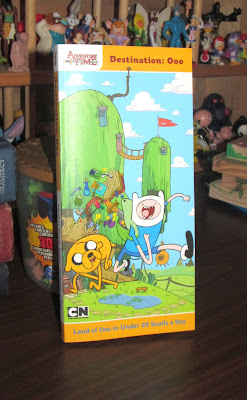 Cruising the book section I found some neat-looking Adventure Time stuff. Adventure time is one of my top animated shows to watch right now, and anything genuinely interesting they put out for it has a good chance of making it home if the price is right. Aaaaand... it was. First up was this Adventure Time Destination: Ooo. Land of Ooo in Under 20 Snails a Day. It's a travelogue! A guide to the worlds of Adventure Time as if you were traveling there yourself as a tourist! There are entries on currency, languages, historical events, and inhabitants. And then it continues on to other realms besides the Candy Kingdom into places like the Nightosphere, Lumpy Space, and the Fire Kingdom. If you're a fan of the show whatsoever, this little guide-book is an excellent scrap-book of some of the best characters and moments. At a little under 9 dollars this was the most expensive item I picked up. But definitely worth it. 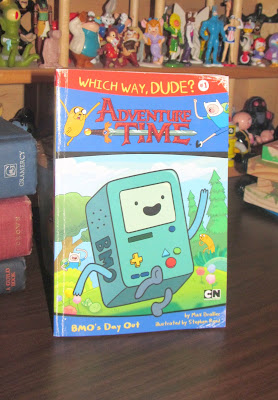 I haven't really had a chance to explore this next Adventure Time book to the same depth that I did the guide-book. This is a "Which Way, Dude?" book, which I think roughly translates into a sort of Choose Your Own Adventure (Time!) book. Well, anyone who has been reading this blog for any length of time knows how I feel about CYOA books. This is book #1 which means, HOPEFULLY there will be many, many more of these suckers. Some of the portions end in a puzzle or riddle the reader has to solve before choosing which page to turn to next. I. Am. Very. Excited. This book cost me just a little under 5 dollars. 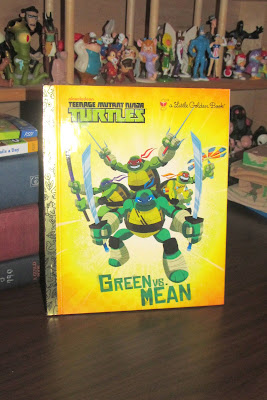 The last thing I picked up at Wal-Mart this weekend was this little beauty. A Teenage Mutant Ninja Turtles Little Golden Book!!! I've heard there was going to be one for MONTHS now, but every time I went looking for it (even on Amazon!) I couldn't find it. So when I got the to book department this weekend and there was a hug Little Golden Books end-cap staring me in the face... what was the ONE thing I held my breath as I looked for? Well it wasn't Doc McStuffins, I can tell you that much. This is a great little story too! I read it to my boys for bedtime the night I brought it home and I really enjoyed it as an introduction to the Turtles. It gives us the run down on the origin story, the four different Turtles' personalities, and a handful of the significant villains (The Kraang, Shredder, Fish-Face and Dogpound) and allies (Shredder and April). The illustrations are reminiscent of the show, but in 2D, using what seems to be the recently developed LGB "House Style". This book has it all! And for the low, low price of 3 dollars! Now I'd just like to see them follow it up with another book detailing other allies and enemies such as Mutagen Man, Metal-Head, Rat King, and Baxter Stockman, just to name a few.

Well, that's it guys! I'll be back soon with some actual Geeky Goodwill Goodies! So until then, Happy Hunting!
Posted by Derek Ash at 8:08 PM