A Random Handful of Goodwill Goodies: The BIG Toy Post

Hey everybody! Welcome back! This time here on Goodwill Hunting 4 Geeks I'm going to show off a random handful of toys I've recently found at Goodwill. 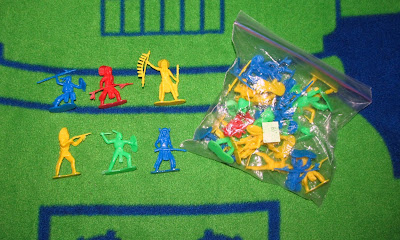 First up is this sandwich baggy full of little plastic Indians. I apologize if this use of the term Indians is considered offensive to any of you out there, but "little plastic Native Americans" just doesn't have the same ring... and is probably way more PC than these little figures probably warrant. Do they even make these any more? These figures don't look too old, but I have no real way of telling. I almost didn't buy these little guys, but I have a weakness for mini-figs of any kind, and the classic plastic-playset variety especially hold a warm and snuggly place in my heart. As you may be able to see in the picture, I paid .99 cents for these guys. They come in six different sculpts and 4 different colors. And I love them.

These are the only toys in this post that I did not in fact buy at a Goodwill. I got them at a thrift store called Nice Twice in Ellsworth, ME that I have mentioned here on the blog before. Specifically, the post featuring the 80's/90's comic books and ads on here not long ago. Anyway, these are two Tiny Toons Adventures Happy Meal toys and one 101 Dalmation toy (that I am going to only look at pig-side up so I can pretend it is a Tiny Toon toy). The gimmick to these is that they flip over to reveal a second character in a different vehicle. I didn't match my pictures up well at all, so I'll just let you know, the first car from the first picture is the bottom of the second car in the second picture, and vice versa. The third car in both pictures is a match. Easy! I find it bizarre that the exact same gimmick was used for two different properties from two opposing animation houses. These three cars were .50 cents apiece. 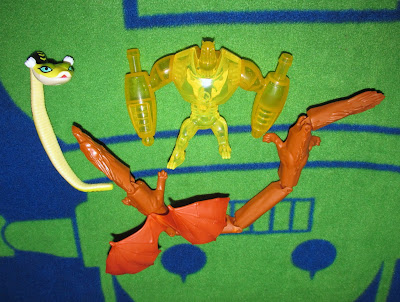 These three toys were in a grab-bag together for .99 cents at the Bangor, ME Goodwill. I have a pseudo-collection of those translucent Ben 10 Happy Meal toys packed away somewhere and I liked the look of this guy so I decided I'd keep it going. I do wish that you couldn't see Ben in the middle of the alien. I really just like pretending these big clear-plastic aliens are Ben-free.The snake from Kung Fu Panda I already own so I gave this one to my kids to play with. The long, brown, segmented dragon I just really liked the look of... until I got home and realized it was from the live-action Last Airbender movie. I still like the toy... but it feels tainted somehow. He was the real reason I picked up the grab-bag in the first place, honestly. The Ben 10 toy was just a butter on the bread. Ah, well. 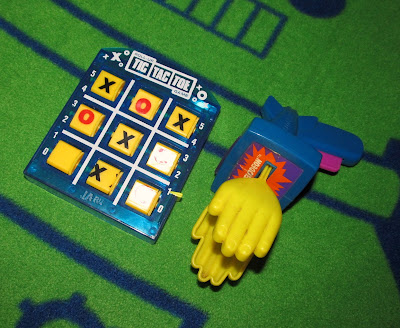 These next two items I paid .99 cents apiece for. The first is a little Tic-Tac-Toe game that reminded me of a doll's version of Toss-Across. It's Tic-Tac-Toe, so you can't really go wrong. I'm keeping it in the random-toys-and-boredom-busters drawer (which I've blogged about. Click on the picture below) of my desk: 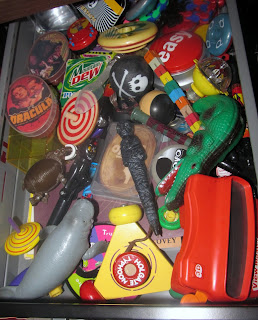 Because it's the sort of thing I can grab and play with for 10 minutes when I need a distraction (because I am SO short on distractions in the Goodwill Geek Cave) and some time to kill. The other toy next to the Tic-Tac-Toe game is a Nickelodeon Applause-gun-toy-thing. Pull the trigger and the yellow plastic hands clap together, while an applause sign simultaneously pops up. This went in my distraction drawer as well. 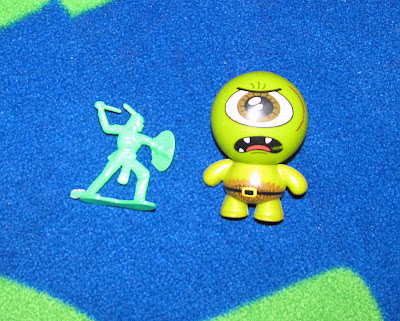 I found this little green Cyclops guy for .99 cents. He looks like he's a collectible urban vinyl mini-figure... but is actually a toy from the "Children's Place". That pricey kid's clothing store at the mall. I haven't been able to find any other information other than the stamp on the back of his head. I don't know if they made others in a series or what. The little green plastic Indian was included for scale purposes only... no cyclopes (or Indians) were injured in the making of this blog entry.

I found this set of magnets in a sandwich bag for .99 cents. No idea what they originally came with, but no searches have turned anything up yet. I thought maybe one of those Klutz sets... but no. The paper-clips and the little metal rod to the bottom left are definitely pieces of the set, because the paper-clips are way too heavy-gauge to be used as actual paper-clips. Their like little tiny paper-weight paper-clips. 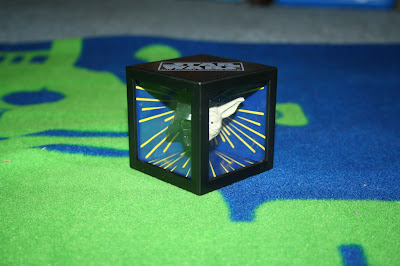 Next are some Happy Meal toys that were all together in a Grab-Bag for 2.99. It was a weird but pretty awesome assortment of items. First up is this "magic box" Star Wars thing, which gives the illusion that if you look in the left side of the box, it is full of Darth Vader's floating, disembodied head, and if you look in the right side, it is Yoda's floating, disembodied head. The whole thing is done with mirrors and half-heads, but I'll never give away that secret. Shhh. It's magic. 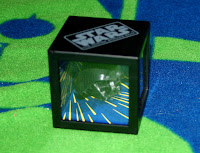 I found the effing thing incredibly hard to photograph as well. These were the best out of something like 20 shots I took of each side. After that, I just picked the best two from each lot and ran with them. You guys already know what Vader and Yoda look like. Just deal with this. 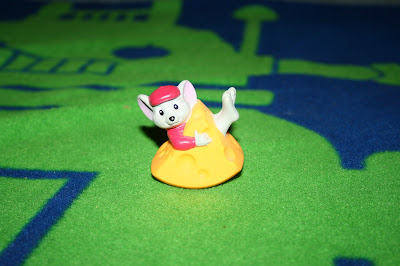 Here is a cute little Bernard toy from either the Rescuers or the Rescuers Down Under. Not sure which. Look at him! This might just get made into a Christmas ornament... I don't know if it was a Happy Meal toy or what. He's hollow plastic, and there's a great big hole in the bottom of that cheese... making me wonder if he was the cap to something... I just don't know. 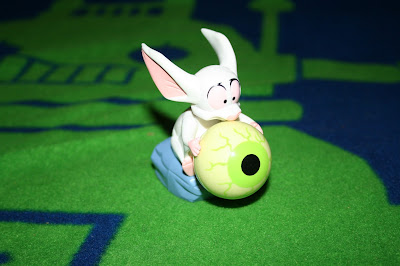 Here is a cute little Bartok toy! Remember him? He's the little albino bat who sidekicks for Rasputin the Mad Monk in the Don Bluth Anastasia film. I don't remember liking that movie all that much, but I can't remember why. Apparently it did very well. I do however, happen to be one of about 3 people in the world who enjoy the utterly weird direct-to-dvd spin-off/sequel: Bartok The Magnificent! At first I assumed this might be a toy from that sequel, but upon examining the packaging (This also turned out to be a Burger King Kid's club toy) I realized this must be Rasputin's eye that Bartok is hugging. Pull it out of his paws and a string causes Bartok to shake violently until the eye reels itself back in. Bizarre. I'm going to have to go back and re-watch both movies at some point soon I think. 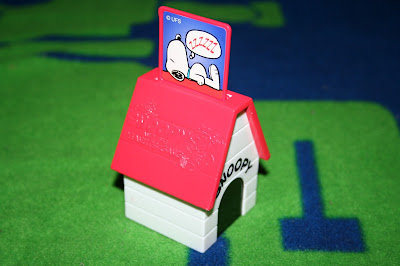 Next in the bag was this Peanuts toy from a Wendy's Kid's Meal! It's pretty basic... but pretty awesome in all the right ways. I'm a casual Peanuts fan in that I like the Holiday specials, and I like Snoopy. This dog-house toy has three little sliders on the back end that let you slide up three different, iconic images of Snoopy into view. The first is Snoopy asleep on top of the house.

The second is Snoopy in his classic Flying Ace get-up and the third shows Snoopy and Woodstock sharing a care-free dance together. The real struggle here was deciding which picture to put on display. I went with the Fling Ace since I like him from the Great Pumpkin special... but then it hit me... I CAN CHANGE IT AT ANY TIME!!! I did a little Snoopy dance myself I was so excited. 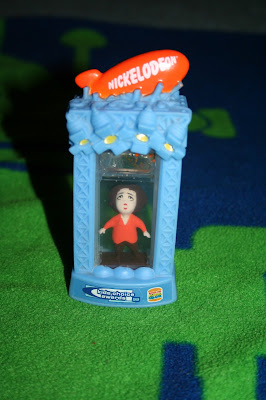 The last toy in the bag was another Burger King's Kid's club premium. And it may just be one of the weirdest toys I now own. It is a Nickelodeon 1999 Kid's Choice Awards toy featuring Rosie O'Donell under what is supposed to be a tank of Nick's trademark slime. I own a Rosie O'Donell toy you guys. And I kind of adore it. The slime in the tank above her has dried up in the 14 years since it was put in there... so that's a little disappointing. What I ended up with is a Rosie O'Donnell perpetually staring up at the sky, as if paranoid a low-flying sea-gull is going to "gel" her hair.

Inside the Grab-Bag, the Snoopy, Rosie, and Bartok toys were all in their original Fast Food Packaging. I shucked and saved the baggies and inserts though. Take a look. 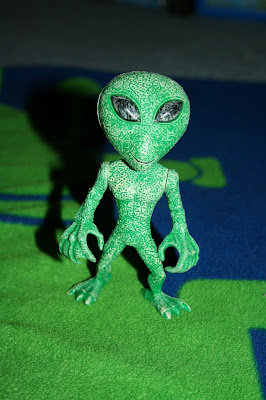 Moving swiftly on, I paid .99 cents for this alien that I know for a fact originally came from a Dollar store. Why buy it then? Because I haven't seen them in the Dollar Store for a very long time now, and I always meant to pick one up. So instead I got it from goodwill. No prob, Bob. He's about as tall as a GI Joe figure. And he's sort of adorrifying. That's adorable and horrifying squished together. I thought I just made it up but a quick Google search proves me completely wrong. 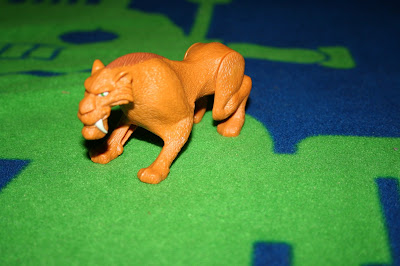 Here's a Diego toy from one of the Ice Age sets. I haven't looked to see which one. But it's pretty faithful to his appearance in the first one, and that's all I really care about, as that first film is the only one I've ever really enjoyed. I got him for .99 cents. 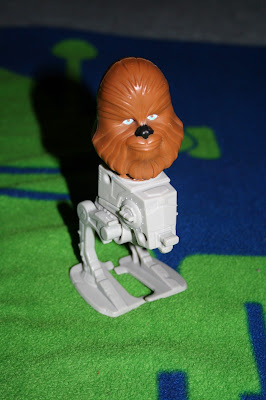 Here's a bobble-headed Chewie after he's just taken over a wind-up AT-ST in the battle of Toy Endor. I actually bought this one for my son, but thought I'd show it off on here before letting him have it. Got it for .99 cents. 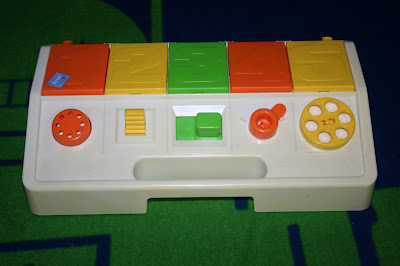 Why what's this thing all secretively sealed and ominous looking? Is it full of gold? Is it full of severed human ears? (I really suck at playing What's-The-MacGuffin?) Let's look shall we? 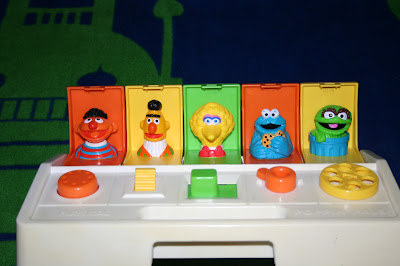 Well let me show you! It's a 1985 Playskool Poppon' Pals Sesame Street toy! Sort of an activity toy with different latches, buttons, levers and dials used to make the characters pop out of hiding. 5 of my favorite Sesame Street Muppets are waiting to be discovered! 1.99 for this little piece of history!

So there. A TON of toys featured today, all bought at different Goodwills on different days, all gathered together for one big post!

That's it for me tonight guys! I'll be back soon with more Geeky Goodwill Goodies! Until then, Happy Hunting!
Posted by Derek Ash at 8:02 PM