Today's Random Handful of Goodwill Goodies is all about kids' books. BUT WAIT! There's some really cool ones in here, so even if you'd normally click away when you see I'm just doing a big weird post about kid's books... hang around for a while, okay? Almost every single one of these books is based on an 80's property, or was published back in the 80's. 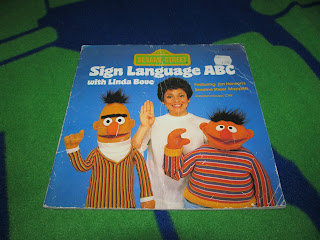 Let me get the obligatory Sesame Street book out of the way. This one's pretty rad though. It's a book of Sign Language ABC with Linda Bove!!! When I was a kid I was completely in love with Linda on Sesame Street and the fact that she was deaf and spoke in sign language only made her seem cooler to little me. I remember this book from somewhere, probably school. I found it not at Goodwill, but for .50 cents at Bull Moose in Bangor, ME. 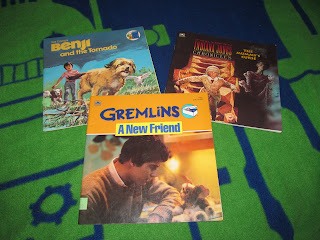 Next up, a trio of exciting Hollywood adventures! These books and all the books to follow were indeed found at Goodwill, for .99 cents. Benji and the Tornado, Gremlins: A New Friend, and The Young Indiana Jones Chronicles: The Mummy's Curse. I was most excited to find the Gremlins picture book, but Young Indy ain't no slouch either. Benji I used to watch a lot as a kid, so  it gives me warm and fuzzies. 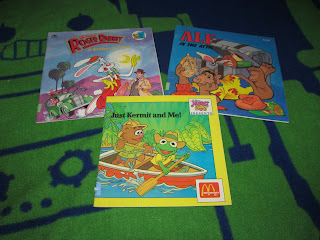 Here we have a Who Framed Roger Rabbit book, detailing a very abridged version of the movie's plot. Then, I found this Muppet Babies McDonald's premium book featuring baby Fozzie and Kermit. There were at least two other books in the series given out with Happy Meals. This one is all about how Fozzie wants to make Kermit into a frog-skin suit he can have Kermit all to himself. I guess. I haven't read it yet. The ALF book is from the animated series, detailing his adventures on his home planet of Melmac. Pretty awesome! 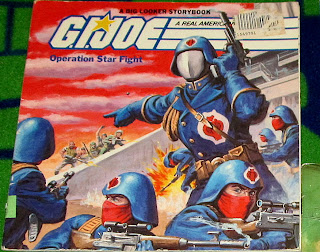 All right! Now we're into the Good Stuff! You can tell because the pictures are solo shots. Here we have a G.I. Joe book titled Operation Star Fight. The art in this book, done by Earl Norem, is phenomenal. It's pretty violent by Joes standards too. It looks like folks are actually taking bullets. The story's not much to talk about (Cobra tries to hijack a space shuttle. It goes about as well as anything Cobra tries to do.) This is a sweet looking book though. 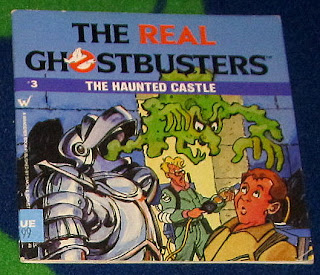 The Real Ghostbusters: The Haunted Castle is nothing amazing to write home about. I'm mostly just excited that I now own a Real Ghostbusters storybook. This tiny little book is about as long as a novel, so it doesn't make for great bedtime reading... It's weird that most 80's books have this same problem. It's like they didn't even take into account that most kids have an attention span of about 40 seconds, give or take depending if there's candy in the room. Fun little piece of nostalgia. 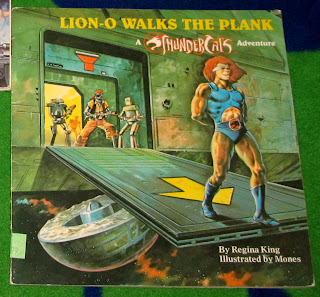 One of the MOST exciting kid's book finds in recent memory is this Thundercats book, Lion-O Walks the Plank! I haven't read this one yet either, but I have to beg the question: How does one walk the plank into the vacuum of space? Aren't they in like... outer space up there in that picture right now? How is that happening? All kidding aside though, I'm stoked (yep, stoked) to own this book. 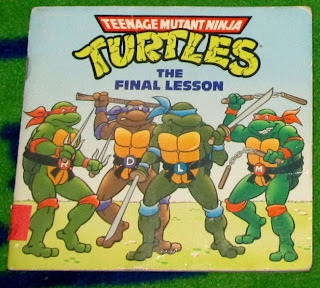 Aaargh! I published this post without writing anything about this tiny little TMNT book! It's pretty great, but much like the Real ghostbusters book above, it's TOO LONG to read to my little guys. Maybe when they're older... until then I'll just hang on to it for them in the cave... 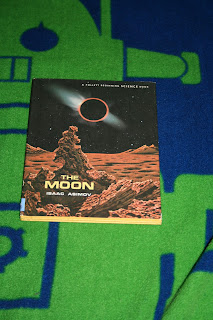 I guess Isaac Asimov must have been into like, science or something. This is not the first kid's science book I've found written by him. There was that "Did Comets Kill the Dinosaurs?" book I found back in August LAST year... (Spooky!) There are no Robots gaining self-awareness in either of these books. It's kind of a bummer. 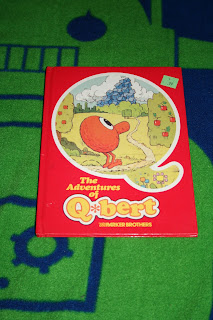 Hey! Here's a Q*Bert book! It has nothing whatsoever to do with the animated series either, which I found pretty refreshing. So no villains dressed up as a greaser/biker gang, and no malt shops or letter-jackets for Q*Bert. 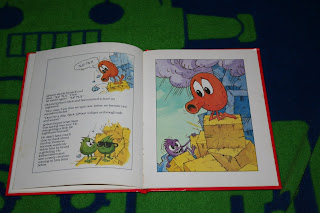 In fact, all of Q*Bert's dialogue is written in code that you decipher using the phrase key at the beginning of the book. The whole thing pretty much just tells a story to explain what the hell is going on when you play Q*Bert. I like how the picture on the cover is in the shape of a Q. This is deep stuff here people. 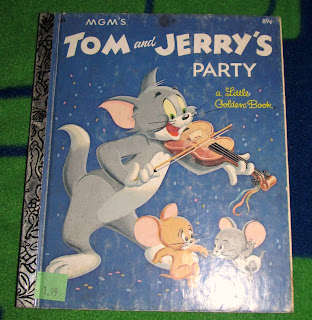 You didn't think I'd do a whole post about kid's books and not have at least ONE Little Golden book did you? This here's a Tom and Jerry LGB. They... have a party apparently. Looks fun, albeit most likely highly unsanitary. I love finding older properties like this. Even though the copyright on the story is 1955, this book was still published in the 80's as the coupon for 15 cents off another Golden book in the back of the book has a copyright of 1982. 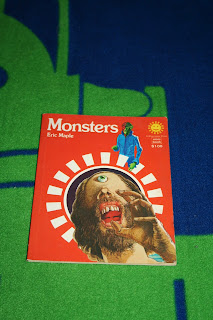 This is one of those pretty standard, generic books about monsters that talks about all the different categories, from old mythology, to current legends and cryptozoology, to monsters of the movies, and the "possible" monsters that aliens could potentially be. The artwork and text are all incredibly cheesy and enjoyable. This is the exact kind of flashlight-under-the-covers kind of book I would have checked out from the school library for six weeks in a row as a wee lad. 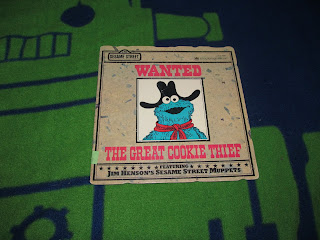 Nyah-ha! I slipped ANOTHER Sesame Street book in here!!! This one's about The Wanted criminal known as the Great Cookie Thief. It plays out like a classic Sesame Street comedy sketch from the show, and it's all western themed. I'm cheating a little bit here as this book is actually from 1977. But it's classic Sesame Street! And by classic I mean the awesome stuff they used to do back in the day before it all started being about Elmo's goldfish.

Well that's it for me tonight kids! I'll be back real soon with more Geeky Goodwill Goodies! Until then, Happy Hunting!
Posted by Derek Ash at 3:58 PM