As long-time readers of this blog may already know, I often take long, ponderous trips to Goodwill, especially on payday Friday. But quite often too, I make quick stops in to see what's what and then I disappear into the ether as quickly as I appeared. I quickly cruise the toy department, the glass case up front, and then scan the books to see what jumps out at me. I will also sometimes walk through the holiday and housewares aisles to see if there's anything obviously cool sticking out like a sore thumb.

Well... this time there were only books that jumped out. No toys... no exciting treasures under glass. But the books were pretty darn cool. Every single one of the books I'm featuring here today cost me .99 cents apiece. 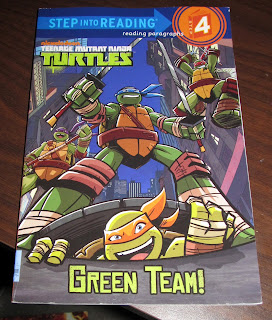 First up I found this nearly-new "Green Team!" Step into reading book. This is selling for 3.99 retail but I got it for .99 cents! I'm a huge fan of the new Nick TMNT series, as are my boys. I have this to read to them at bed time now! It tells the story of the two-part premiere of the TV show, introducing the Kraang and Snakeweed. 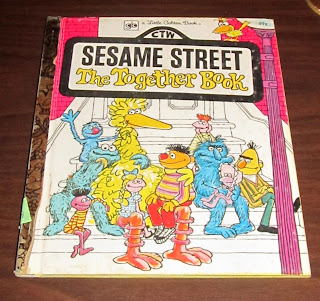 Next, there's a handful of Little Golden Books, (so keep scrolling down past them for the two coolest finds if you're not into LGBs) the first of which is the Sesame Street "The Together Book". This copy is a fifth printing from 1976. Roger Bradfield illustrates this book, which gives it a super old feel that I just love. This was back in the day when they weren't generating standardized "house style" images of the Sesame Street characters from a computer template. This thing feels homegrown. 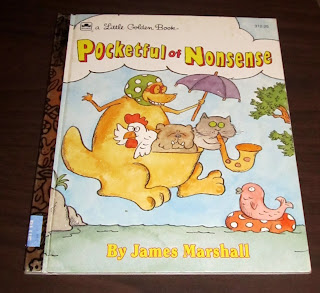 Next an odd one, Pocketful of Nonsense from 1992 by James Marshall. This I almost didn't pick up, but then saw it was full of nonsense rhymes like "Fuzzy Wuzzy", "Cinderella Dressed in Yella", and "A Peanut Sat on a Railroad Track" and I decided it could come home and live with me. 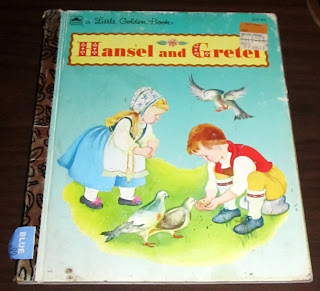 This one is a reprint of a reprint of a reprint from 1992... but I don't care. "Hansel and Gretel" is one of my favorite fairy tales from childhood. I got the menace behind that candy house before the kids ever even touched it... and it thrilled and terrified me as a child. This edition is illustrated by the famous Eloise Wilkin, whose work I usually pass up because it is featured in mostly religious LGBs. I'm not anti-religious by any means, but I'm also definitely not religious by any means either. 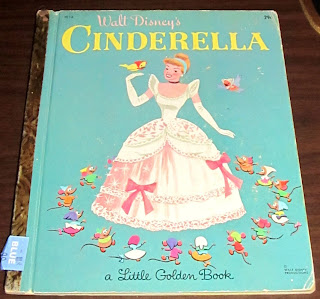 This is a great one right here. All I can tell is that it is a 14th edition printing and it was done sometime around 1960. But the gold binding has that distinctive older look that the books put out in the 80's don't have. It's less metallic and shiny, and has leaves and vines in a sort of sepia tone instead of the sharp black you see later on. The story itself is beautifully illustrated, and looks more like the LGB "house" style than the Disney film style, which you would see nowadays. 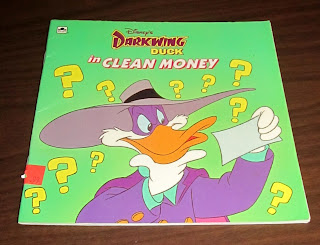 Aw yeah. Now we're getting to the really cool stuff. I never turn down Disney Afternoon picture books of any kind, but ESPECIALLY not the ones featuring the Terror That Flaps in the Night. This story features the villainous Ammonia Pine, cleaning-themed agent of F.O.W.L. who is laundering money to an excessive degree. There's just no such thing as a boring Darkwing Duck story. I saw this book on the shelf and shouted "Let's Get Dangerous!!!" 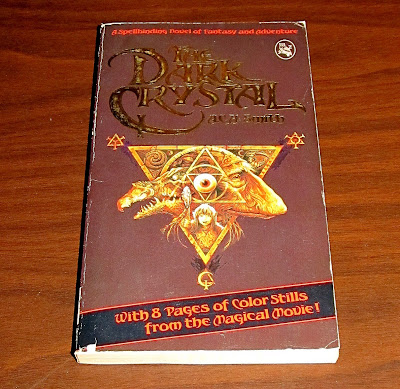 And last but FAR from least was this novelization of the Jim Henson film The Dark Crystal. Just look at that cover illustration! This is an "Owl Book" put out by Holt Rinehart Winston publishers in 1982. The "8 Pages of Color Stills from the Magical Movie!" are pretty great, but could have included a picture of the urSkeks. I'm thrilled to now have a copy of this to put next to my Labyrinth novelization.

So for less than 7 bucks I brought all these great kid's books home from Goodwill! That's it for me tonight kids! I'll be back soon with more Geeky Goodwill Goodies! So until then, Happy Hunting!
Posted by Derek Ash at 6:25 PM