Lately, I've been meeting interesting people all OVER the internet, and I've been discovering a lot of awesome new blogs because of it. So when I was contacted here on Goodwill Hunting 4 Geeks by one Laura Huey, I set about exploring her blog, boobobby.blogspot.com a little bit at a time. She only started blogging a little over a year ago (like me!) and went through a move shortly after (also like me!) so we get to see this transition on her blog. She has three kids (me too!) and loves showing off her thrift discoveries (ahem, me again!) on her blog.

She recently showed off a curio shelf she picked up second-hand, repainted, and filled with kitschy goodness. I just loved it. So I told her I had a curio shelf in my cave that I had filled with stuff in a similar way. I THOUGHT I had done a whole post about that shelf on here already. Turns out I only gave you a glimpse of it back when I first showed off the Goodwill Geek Cave back when I finally got it decorated the way I like a while back: 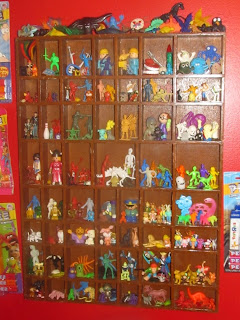 This is what it looked like then. Looking at it recently, I didn't like the looks of it anymore. It was just too cluttered. With Laura's awesome post fresh in my mind, I wanted to feature this shelf on the blog, so I tried to de-clutter it a bit. I half succeeded. Here's what it looks like right now: 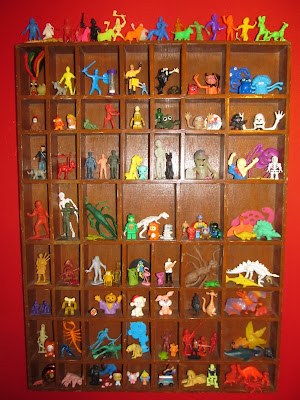 Before, there was so much stuff crammed into every square that you couldn't really see anything. I removed ANYTHING I wasn't immediately charmed by. I made a pile of stuff to remove, and a pile of stuff that would go back on the shelf. Then I picked a few new things that would look good up there now as well. This is still my homage to the kinds of toys that get lost at the bottom of the toy box. The stuff that get's scooped up in handfuls and donated to Goodwill (or worse THROWN AWAY) that people vaguely remember as those cheap but cool little doo-dads they had when they were kids. This is my paean to those toys.

Let's start with the very tippy-top shall we? We've got all kinds of plastic figure goodies up here! There's some spacemen I'm pretty sure are vintage, and some neon plastic dogs that I have NO information about whatsoever. A pirate and a skeleton warrior I found at Goodwill... and the best items up here: The Z.O.M.B.I.E. figures from October Toys (I picked these up at a local music/movie/game store called Bull Moose Music, where they just have a big dish of them by the register) and the Scooby-Doo plastic figures which are actually game pieces from some Scooby Doo board game I also found at Goodwill. 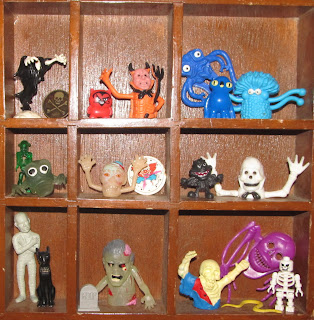 This is my favorite corner of the whole shelf. There's a bunch of little rubber finger-puppet guys, and almost everything is monster themed in some way. The top right four squares, with the blue aliens, devils, clowns, and dapper monsters are some of my absolute favorite little toys of all time. 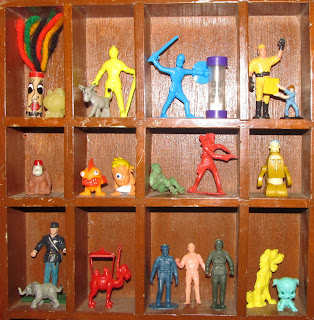 The top left corner of the curio shelf is not without it's cool details. Plastic knights, plastic cowboys, a fez monkey, a cyclops surfer dude... these are all awesome in their own way. I think one of the best little toys in this corner is the little red camel with the canopy on its back. I don't know where he came from originally, but I do love him so.

These are the middle two rows of the shelf, separating the corners I've just shown you from the top, and the bottom corners I'll show you next. There's some really great stuff in here. I have a square dedicated to giant reptiles, some vintage dinosaur erasers, wrestlers! and much more. The pink flamingo and the guy playing guitar are two of my favorite mini guys here. The gray astronaut being confronted by a yellow squid-like alien also floats my boat. Plus giant rubber ant! 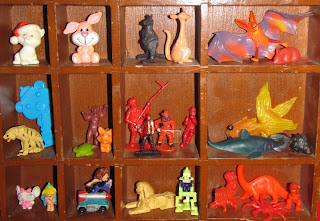 Got a handful of deceptively girly items sprinkled through this corner. You can see a kitten in a Santa's hat, and a pink bunny. These are there to honor the holidays I feel they represent. I'm actually referring to the mouse in the pink dress and the flower fairy in the bottom left corner there. These used to belong to my daughter when she was little, and I always think of her when I see them. Among the crowd here you'll also see a pair of goofy old kangaroos getting ready to duel, a teddy bear ice-skating past a hungry tiger, a whole troop of fire fighters, rubber fish, and a set of red prehistoric creatures all together (I'm counting the crab because I know there were crabs back then... and it's my shelf, so I do what I want.) 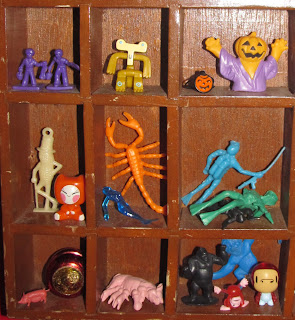 Finally the last corner of the shelf holds my little purple afroed car washers, my suckling pigs (oh no! one piglet has wandered off!), my monkey themed square, my plastic divers-themed square, and my Halloween square. That little pumpkin you see next to the finger puppet is a cool little tin ring lacquered orange and black and it is AWESOME. Other stuff as you can tell is just sort of randomly wherever. Why Mr. Peanut is standing next to that little orange Asian kid I don't know. Why a mermaid is basking in the glow of a orange scorpion I'll never figure out.

A LOT of this stuff was picked up in grab-bags and sealed LEGO bins at Goodwill. Goodwill Geek Tip #394: ALWAYS buy the taped up tubs full of LEGOs. There is always a crap-ton of other stuff in them as well. Little plastic soldiers, Hotwheels cars, anything. They're almost never just LEGOs. It's like opening the Arc of the Covenant without getting your face melted off.

I want to thank Laura Huey for inspiring this post! She really has a great blog, over at boobobby.blogspot.com and great taste in general. She blogs about more than just what she collects, which is great. It's not all just about the vintage Raggedy Ann accouterments and 70's style owls.

She blogs about her family, her beliefs, her friends, her conflicts... she's a well-rounded renaissance blogger.

With that said however, I want to take some time to point out some of the cooler posts she's written, dedicated specifically to her collecting:

- In this one she shows off some of the incredible pieces she's collected and has on display in her bedroom. 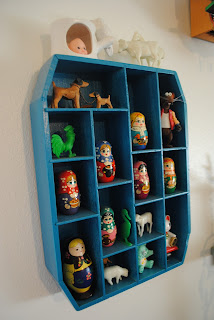 - This post features a ton of vintage goodies that she displays out on the built-in shelves in her home. You need to see some of this stuff! 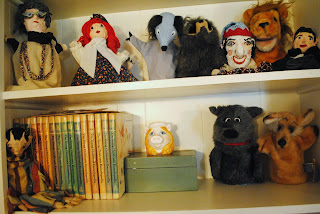 - This one showcases Laura's awesome ability to take old kitschy items and decorate a kids room with them in a way that makes them look new and fresh. Some of this stuff I wouldn't look twice at if I saw it at Goodwill. Seeing it up in Laura's daughter's room makes it look fashionable and cool.


- In this haul post, Laura shows off some thrifty finds. For every kitchen rooster or canning supply she picked up there was a Never-Endng story on VHS or an old Jack-in-the-box. I have no idea what's going on with the baby-limbs in the seashell... just go see for yourself. 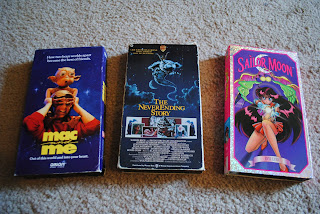 That's it for me tonight folks! I'll be back in a while to show off some Geeky Goodwill Goodness. Until then, Happy Hunting (and check out Laura's blog!)
Posted by Derek Ash at 3:34 PM