December 5: The 23 Items of Christmas 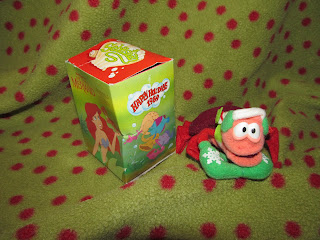 A Sebastian the Crab Christmas Ornament from 1989! I paid 1.99 for this little guy, and he came with original box.

This was put out by McDonalds the same year the movie came out. The Little Mermaid was the movie credited with starting Disney's animation "renaissance" and Ariel the Mermaid was hella hot (to 11 year old me) and I had a huge crush on her. I was aware she was a cartoon at the time... yes. This did not matter to me at the time. I realize now of course that things probably wouldn't have worked out between us.


I have no idea why the image with this song is a picture of Baloo's ass in his grass skirt (I see a little crack there, right? I'm not imagining that?) but here is a version of Deck the Halls sung by Sebastian the Crab.

I'll be back with more Ever-Green Goodwill Goodies soon... so until then, Holly-Jolly Hunting!
Posted by Derek Ash at 4:24 PM