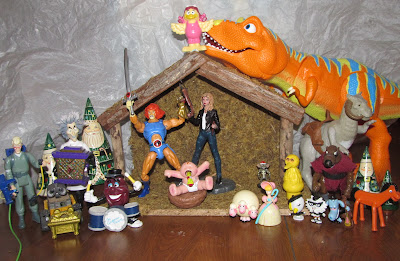 Well, it's certainly not a winner, as my scene-setting and photography skills are total crap...

But here's my entry into the 2012 Dork Horde Action Figure Nativity contest!

The baby Jesus is represented here by a Garbage Pail Kid: "Up Chuck" who has taken over Big Bird's nest as his manger.

Joseph is portrayed by the much-suffering Lion-O who doesn't look pleased at what his wife has delivered.

Buffy takes the role of Mary, and is ready to defend the little guy, should the sword of Omens get too close.

We have a Californian Raisin drummer boy, ready to jam out.

Bo Peep is herding a large flock, including her own three-headed sheep, Big Bird, the Puppet Land Band, Pokey the horse, a wampa, a T-Rex, and Splinter (though I think it's up to you, the viewer to decide if Splinter is part of the flock, or if he's also a shepherd).

My Angel is Birdie from McDonald-Land, who's delicious, breakfast-y smell may be drawing her some unwanted attention.

And the trees all around are the REAL spirits of Christmas, just making sure things don't get too religious in our celebration.

Well, wish me good luck! The composition is terrible, and it occurs to me now that I should totally have put something down under the manger (like... a tan blanket or something) to make it look less crap.

Anyway... Christmas Eve is a week away! I'll be back soon with more (hopefully less profane) Goodwill Goodies! Until then, Happy Hunting!
Posted by Derek Ash at 6:26 AM