December 4: The 23 Items of Christmas

I'm always excited about Christmas books, and kid's books in general, so expect to see some books featured here before the month is out. 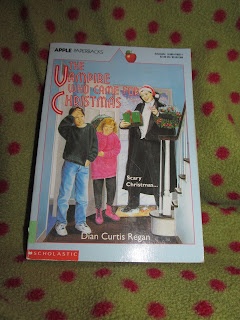 The first one I'm featuring is The Vampire Who Came For Christmas from Apple books, by Dian Curtis Regan. I haven't read this one yet, but I look forward to it... as it looks 100% ridiculous. Ben discovers there's a vampire hiding out in the attic of the house he and his family have just moved into. Turns out Zander is a friendly vampire from Multiveinia, a member of V.A.M.P. (Vampires Against the Mutilation of People) in hiding from the Vampire King (The Big Guy, who's very name would cause you to melt into a puddle if you heard it, he's because he's that powerful) because he's gone good. Scary Christmas indeed!

I picked this up for .99 cents, and it looks like the kind of awesome book you'd expect from 1993, and from an author who's other works include My Zombie Valentine. Most of the chapters have titles like: "Deck the Halls with Boughs of Horror", Silent Night, Scary Night", and "It's Beginning to Look a Lot Like Curtains". So pretty much awful. I can't wait!

In another bit of non-holiday related business, Eric Stettmeier over at Toyriffic did a post on the awesome retro rereleased Tim Mee Caveman figures and Battle Mountain playset. I remarked that I had a version of that same playset in red plastic that I found at Goodwill a few months back, and he said he's like to see it. So... here it is Eric! 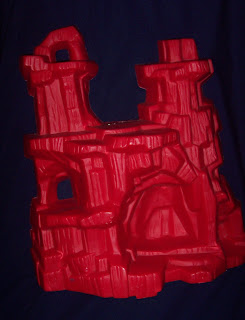 If you look carefully at the base of the playset, there is a red tab that sticks down just under the big cave mouth that keeps mine from sitting flush on a flat surface... almost like it's supposed to click into a larger base or something. Anyone know what this tab might be for? I notice the reproduction in Eric's post does not have the same tab.

Anyway, that's it for today! I'll be back soon with more Never-Grinchy Goodwill Goodies... so until then Holly-Jolly Hunting!
Posted by Derek Ash at 9:54 AM