This is my daughter's Strega Nona doll from when she was little. Strega Nona is the star of a series of books by Tomie DePaola (DePow-La), and her name literally translates to "Grandmother Witch". 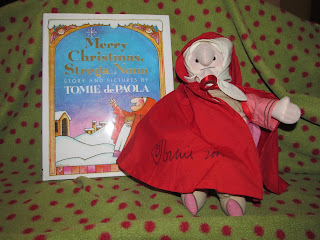 We bought it for about 3 dollars on clearance at a store called the Grasshopper Shop. My daughter promptly fell in love with it, even though my grandmother called it "ugly as homemade soap" (My grandmother also thought my daughter had named the doll after her, who we all called "Nanee"... which we just let her believe).

This led us to needing to track down a bunch of the Strega Nona books, which my daughter also loved. Which of course led to us tracking down the book, Merry Christmas Strega Nona, which it turned out, the doll was based on, hence the red cloak, as seen on the cover of the book behind her.

Strega Nona was dragged around and loved a lot when my daughter was younger, and even got to meet her creator, Mr. DePaola at a bookstore signing in Bar Harbor, ME (you can see his signature on the cloak there, the black squiggle near the bottom). That was when my daughter was 7 years old, and she still dragged her dolls around with her.

Now... Strega Nona only comes out around Christmas time, with the rest of our Christmas decorations. She is a treasured memory keeper for our family, filled with stories, nights spent comforting my little girl, and childhood playtime adventures.


I also want to highly recommend the entire Strega Nona series for anyone with kids, boys or girls. They have a rustic, old-world feel that feels like a series of fairy tales or folktales, but without being impersonal. They're warm, friendly and familiar, like Frog and Toad or Henry and Mudge. My daughter loved them growing up, and now my boys like hearing the stories as well.

I know I'm a bit lax on my countdown... but I'm choosing to not care. We're in full-on holiday prep mode here, with not only Christmas, but a couple of birthdays to get ready for. I don't feel guilty for ungluing myself from the computer for a few days.

I'll be back soon with more Goodwill Goodies! Until then, Happy Hunting!
Posted by Derek Ash at 7:10 PM