December 2: The 23 Items of Christmas 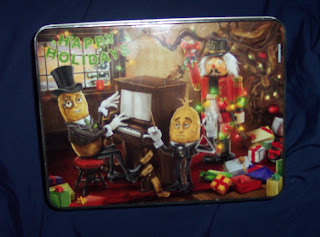 A Christmas Tin featuring the Planter's Mascot, Mr. Peanut! Normally, I wouldn't go out of my way to buy decorative tins with Christmas decorations... except... this has the hilarious new version of Mr. Peanut on it, voiced by Robert Downey Jr. Looking around the edges of the tin, you see all of the animal characters from the commercials, and of course, there on the top are his new sidekick/servant Benson and his nemesis/frenemy, Richard the Nutcracker, who goes all zombie-bitey whenever Mr. Peanut's around.
Mr. Peanut as voiced by RDj, and with his new image and personality have had his detractors of course, but I find him hilarious and charming, and just what the brand needed. I'm of course a fan of advertising mascots, and so when it comes to Planters... I like what they've done with the place (and face). 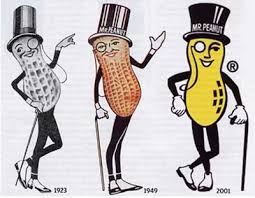 These images, are all pilfered from internet... though I think I pilfered them from pilferers, so I'm not sure who to credit.

I see they've got a new tin out for 2012 in stores now, but I find it much less interesting to look at, and so won't be going out of my way to purchase one. I picked this one up for .99 cents, and will be festively displaying it with the other Christmas decorations this year.

And just in case your head is encased in wax and you haven't actually seen any of the new spots:

In this next one, meet Alejandro: This is where the brand goes a little more to the California Raisins end of the spectrum... which I don't hate.

And Mr. Peanut in the annual Tree Athalon.


UPDATE TO ADD: There's MORE... and it gets even awesomer! Try some action adventure:

And to finish: Mr. Peanut sings the Christmas Song:

I'll be back with more Goodwill (toward men) Goodies... so until then Happy Holiday Hunting! (Better, but not best... yet).
P.S. I edited to change the countdown to 23 days. I will NOT be posting on Christmas Eve. So... Christmas Eve Eve will have to suffice.
Posted by Derek Ash at 6:13 AM