December 1: The 23 Items of Christmas

So yes... I'm attempting another Holiday Countdown... after the last one nearly killed me. NEARLY KILLED ME.

But I'm keeping this one simple. I'm going to feature one something every day, write a little about it, and move on with my life. I may still be posting other stuff as well, but as for my Christmas Countdown... that's it. They won't even all necessarily be things that I've bought at Goodwill. I am just playing it THAT fast and loose. 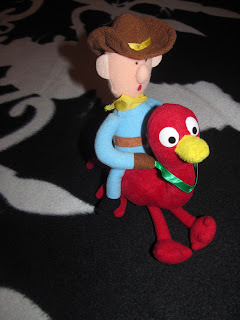 Here's the first item, which wins by the fact that I already have a photograph of it, and I don't have a ton to say about it.

Of course, you can see why I had to buy this item from Goodwill for .99 cents. It's the cowboy riding an ostrich from the Rankin & Bass "Rudolph the Red-Nosed Reindeer" special, in bean-bag buddy form. He's beautiful.

Merry December! I'll be back with more Goodwill Greetings soon, so Holly Hunting! (Still working on the modified tag-line for December... because that... was crap. And the redress for the site is coming. Sigh.)
Posted by Derek Ash at 7:24 PM